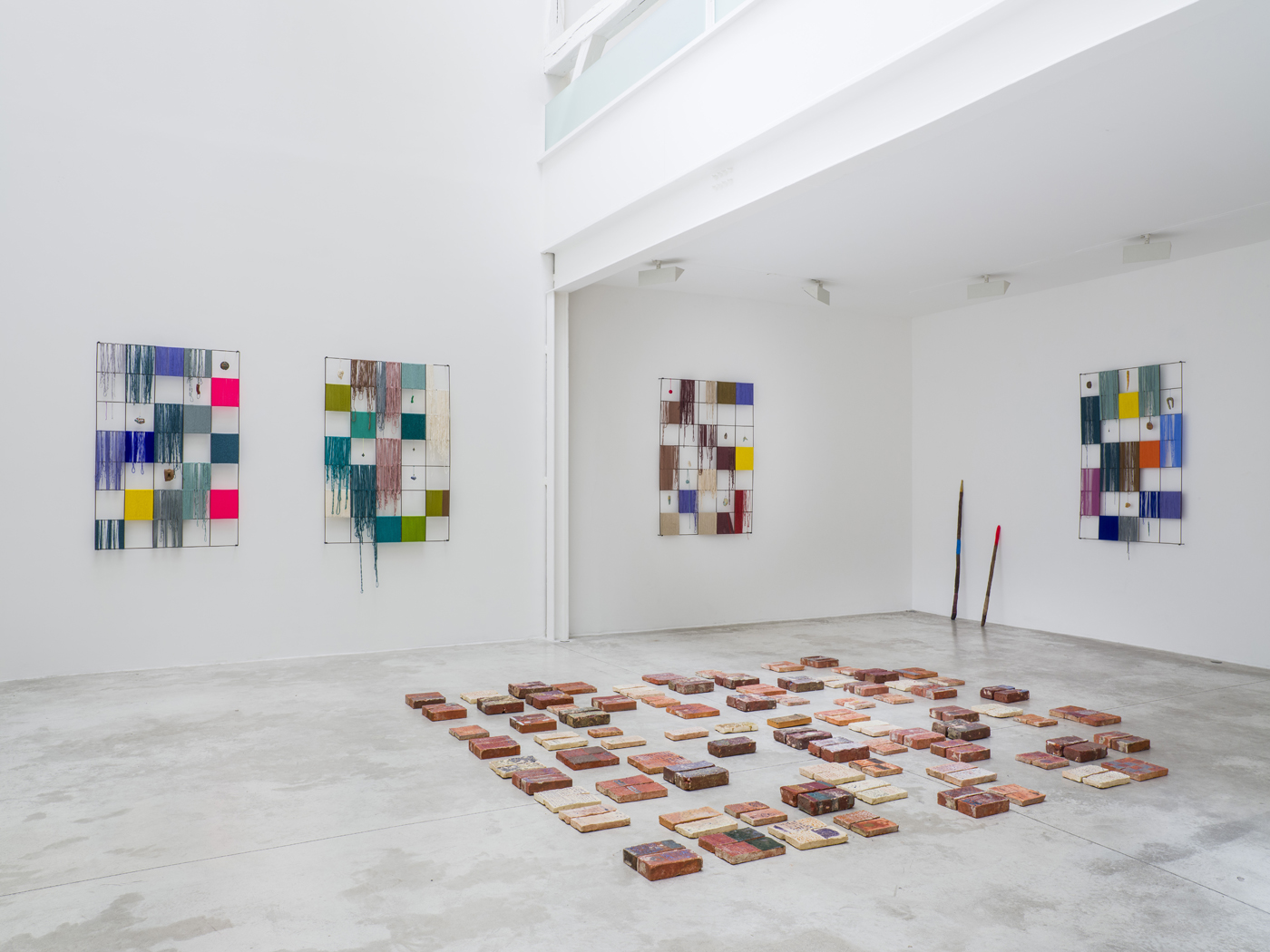 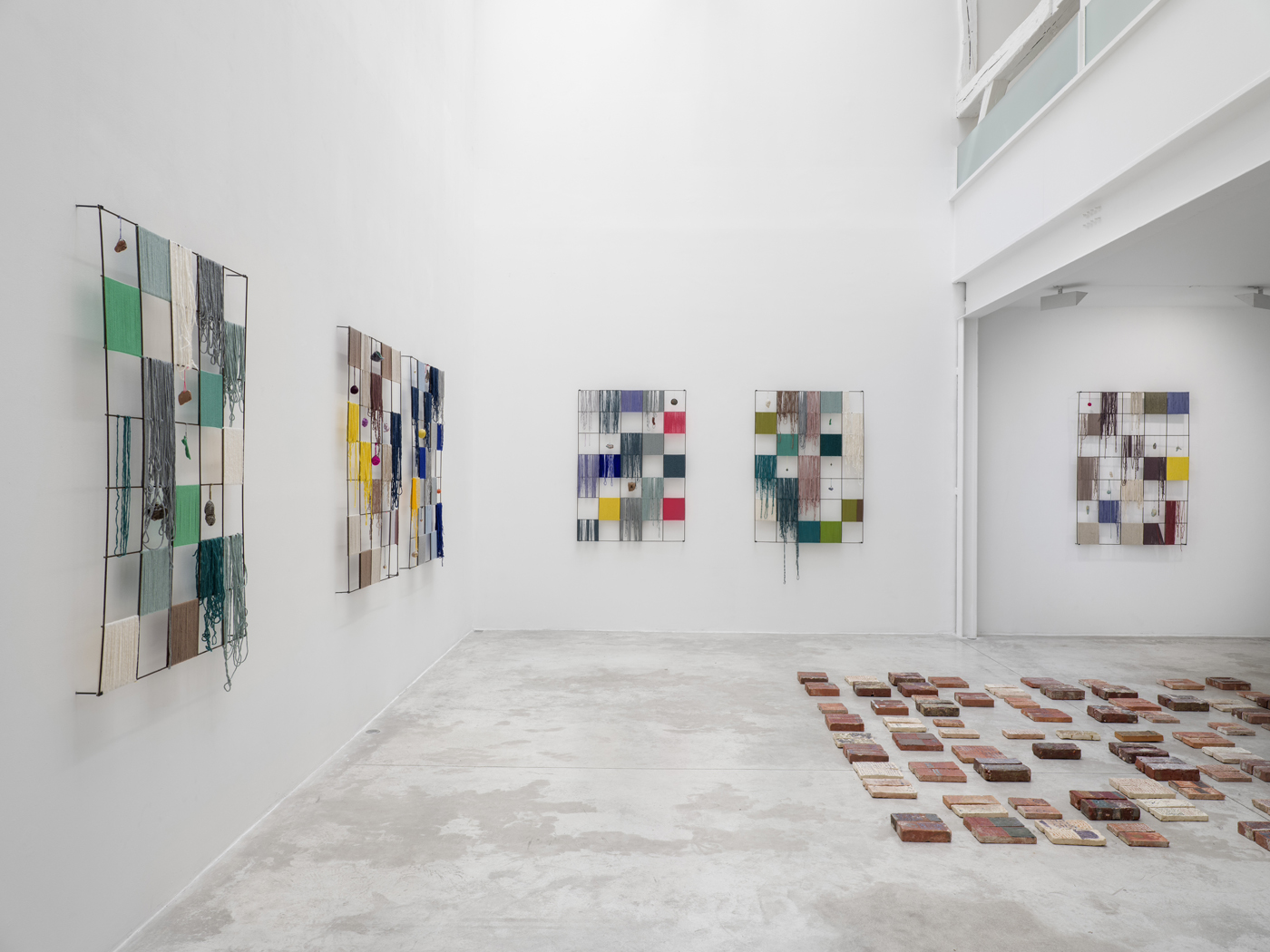 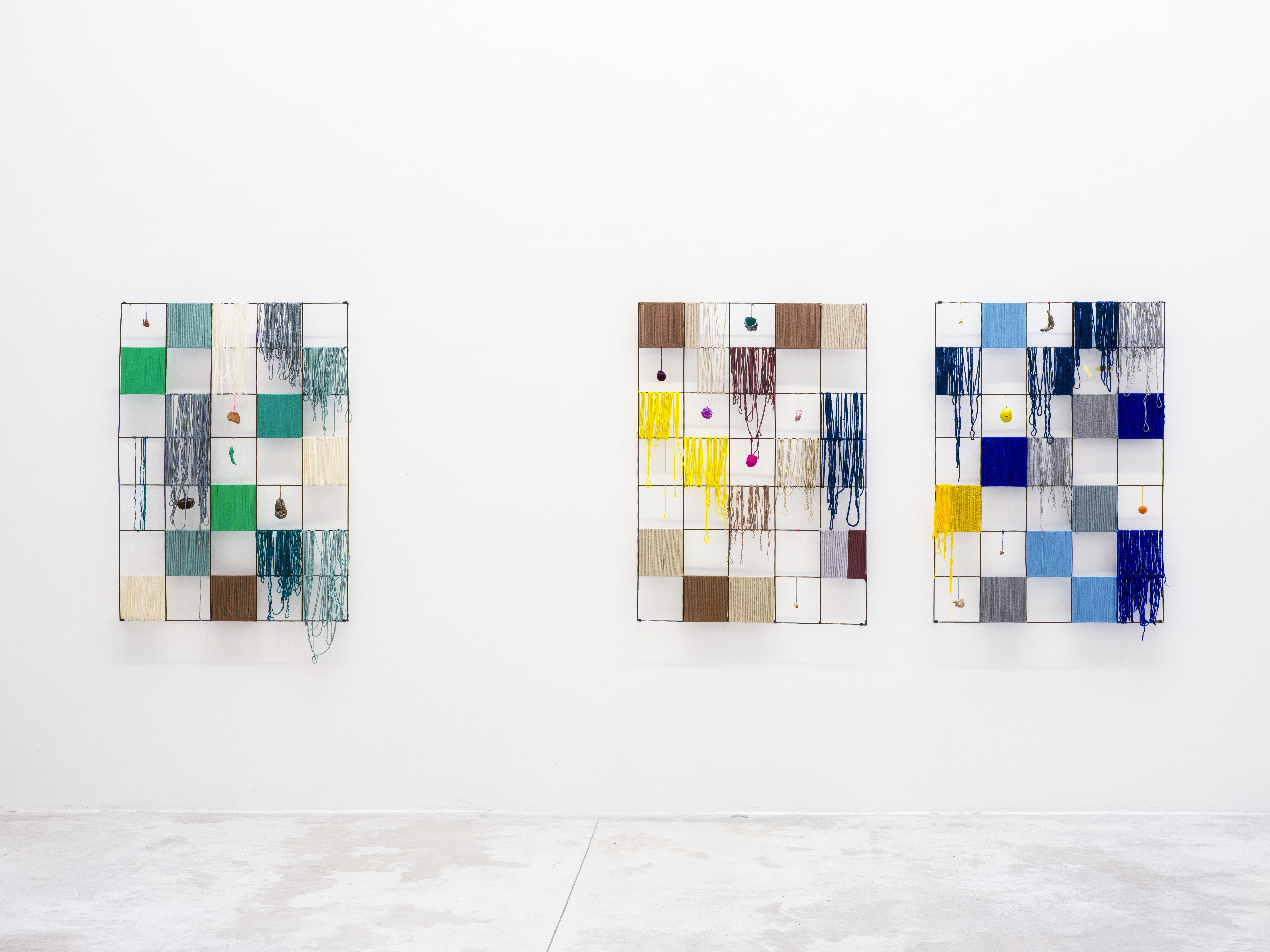 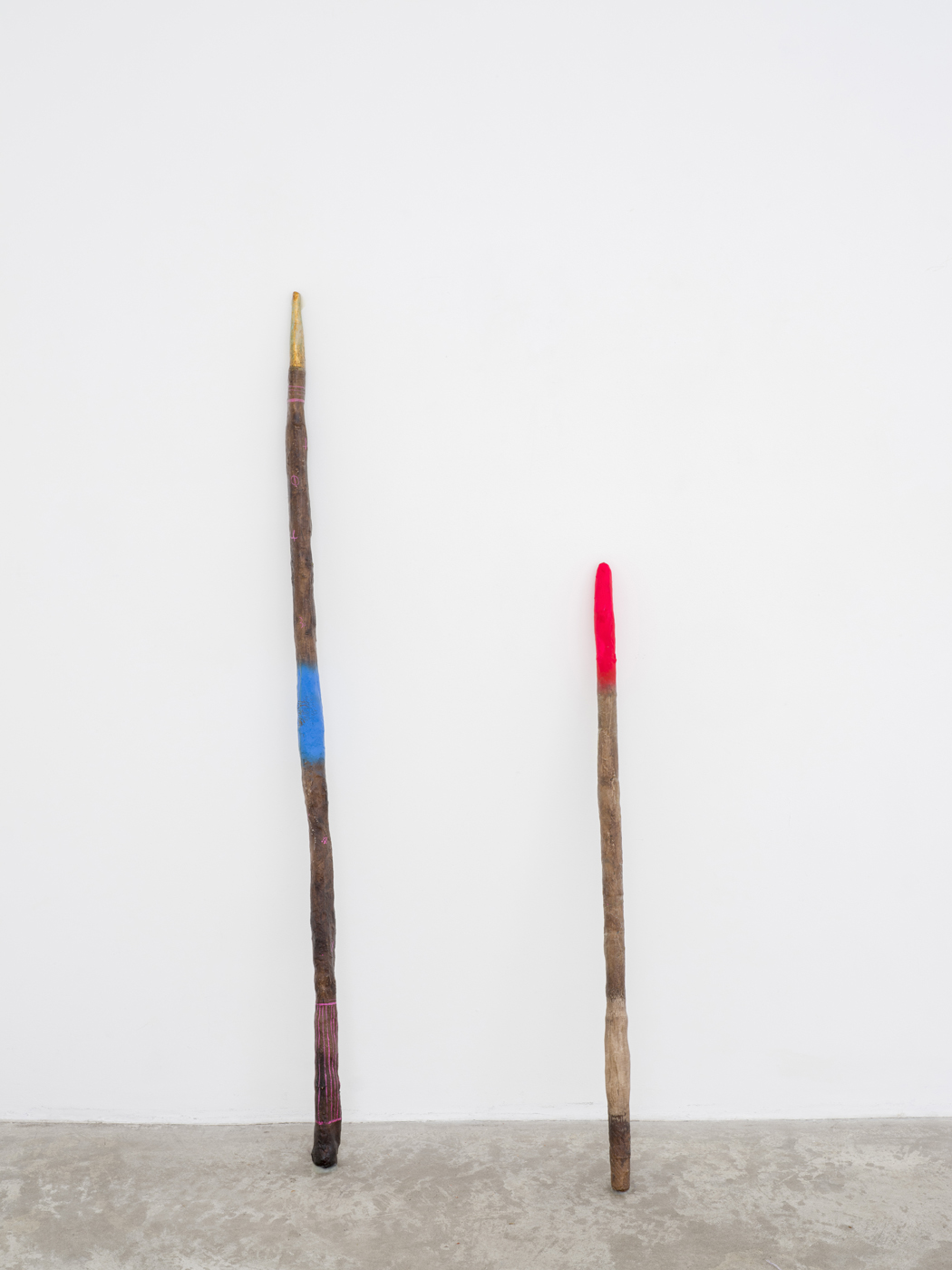 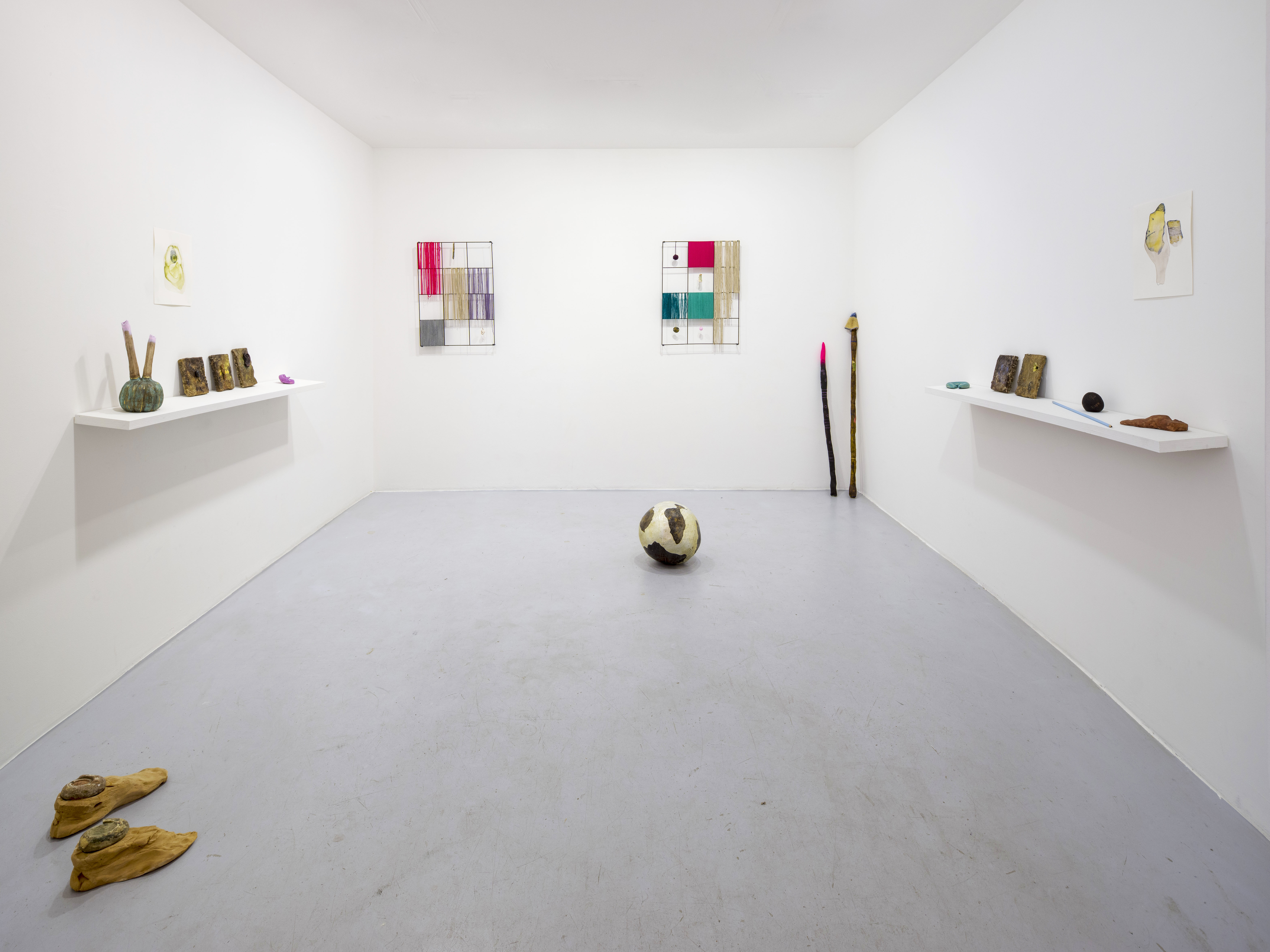 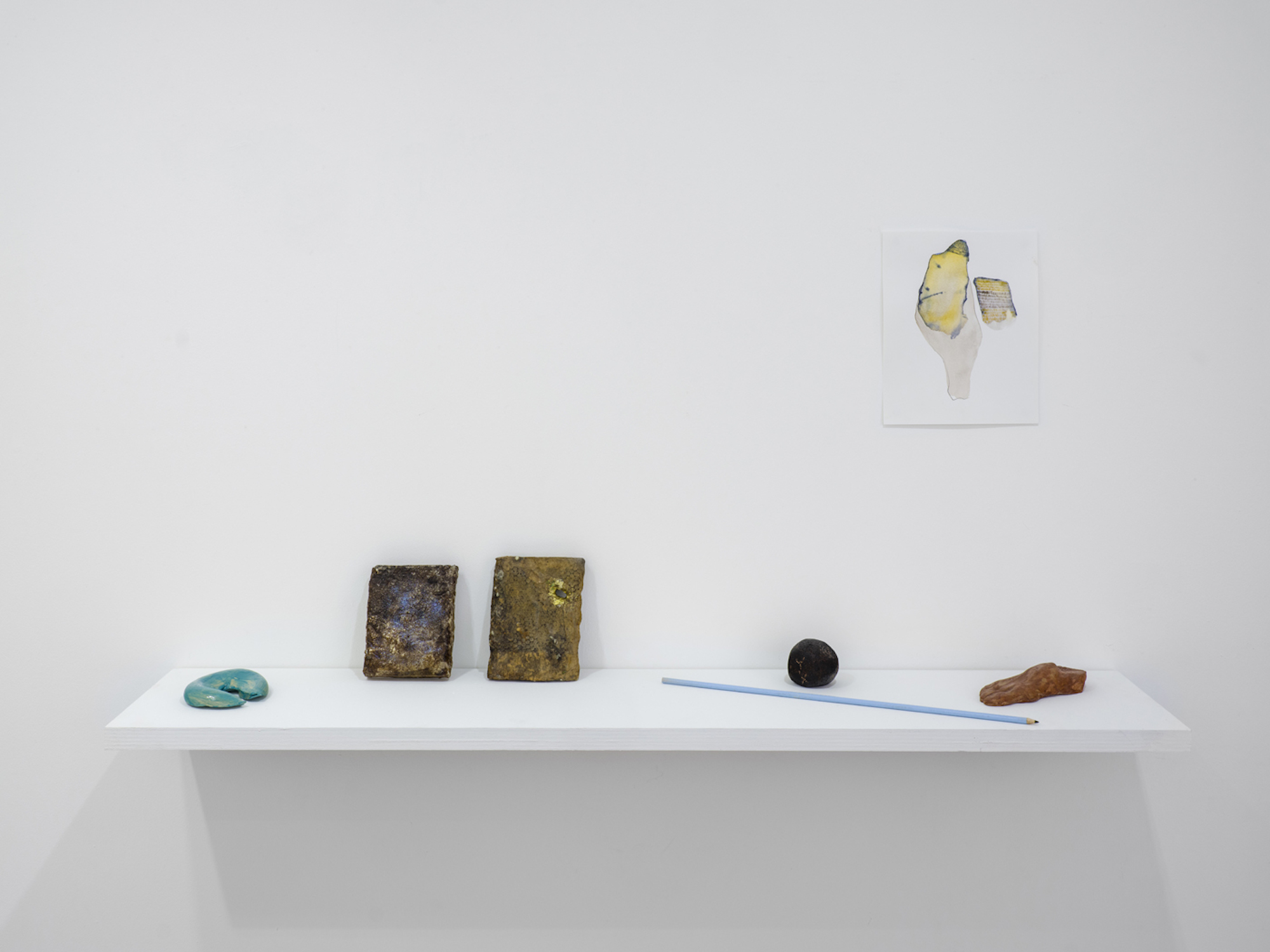 The  Library  of  Encoded  Time  is  the  third  part  of  a trilogy devised by Ciaccofera, which questions the relation  of  signs  to  matter  and  memory.  The  first  part, The Translucent Skin of the Present, made at the Vitamin Gallery in Guangzhou in 2018, was followed by A  Chimerical  Museum  of  Shifting  Shapes,  made  at  the Voice Gallery in Marrakesh.

The works created for this show, planned as a whole, in which each piece resonates with the next, are the result of a twofold line of thinking about both the erosion and saturation of memory, as well as its creative rekindling. Sculptures  placed on the floor and on shelves, mural grids, rods leaning against a wall, works on canvas and paper, all appear like fantasized archaeological objects, installed as if in a real excavation  site, “edified” using local elements, like bricks and grids. As in his similar earlier installations made in Marrakesh and Guangzhou, Ciacciofera uses kinds of shelves covered with signs, inspired by cuneiform tablets and undeciphered ancient alphabets, local bricks, and “earth” clay from France. In a process designed to rekindle their memory, he carries out  an  initial firing which “cleanses” the object’s past, and carries on with the task of the craftsman preceding him with forms of writing, made with needles from the
pharmaceutical industry, pigments and water, prior to a second firing. Set on the floor, these bricks forming the library called The Library of Encoded Time follow
a specific order, as in an archaeological site, tracing a sort of grid with solids and voids, in a rhythm which also suggests a “loss”.

The mural grids enclosed by threads, titled Janas Code (conjuring up those Neolithic tombs called domus de Janas1 which are to be found in Sardinia), where objects
and sculptures are hung, duplicate this rhythm of solid and hollow, echoing the bricks. They are made with grids from local building sites, used for construction, which Ciacciofera cuts up and processes, for which they trace and also make specific supports, in order to keep them  away from the wall like pictures. Decorated  with threads, some of which drop down after a deliberate cut, these new “edifices” thus reveal a certain fragility. The sculptures made of resin and ceramic,  sometimes in the form of trilobites, and the real fossils and collected objects suspended by threads from the grids—based on a practice obsessing the artist since his youth, when

he collected ancient ceramics as well as manuscripts and furniture—connect these works to the quest for universals which informs the artist’s work, beyond the western world. This Neolithic head coming from Central Europe, and this Inca head link these grids to a history ranging from the Mediterranean to South America, by  way of Africa.

The painted clay rods, incised with signs, and covered with pigments and layers of gauze and fabric, the ceramic heads placed on shelves, and the  figurative works on canvas and paper are all connected to a remote past, when the emergence of both signs and figures was imbued with shamanistic rituals, whose mysterious nature today all the more permits re-invention by the work. The painting in which a fish appears (Holding the Rod Parallel to the Water), calling to mind the fossils on the grids, was made using the same principle of layering that we find in the rods, by the addition, in a slow process lasting 200 consecutive days, of several layers of pigments mixed with water, ending up by creating a surface calcification.

In this show, Michele Ciacciofera is interested in signs, in  particular symbolic ones, and their emergence from the Neolithic period on, some 40,000/30,000 years BCE, as well as ancient languages, some of which are still undecipherable today. These signs which have lost their meaning appear, for him, like holes in the memory, witnesses of a past that we think we control because it has been museified, sometimes in an excessive way.

In tandem with this loss, he starts out from the paradoxical finding about the current saturation of memory. The  fact is that the full experience of the present and projection towards the future call, in his view, for a continual updating of the past, a postulate confirmed by his numerous readings on the subject of the work of Kubler, Foucault (archaeology as the only access to the present), and Agamben. In the end, archaeology appears for him as the meeting-point of his other areas of interest, from history to anthropology by way of the political and social sciences. What is more, his attention
to signs and to symbolic language lead him to observe the degree to which present-day technologies, in particular the use of emojis with smartphones, are just a
continuation of this desire for symbolic language rooted in a requirement of human communication. His relation to technology is less part of a criticism duplicated by a desire to return to the past than of a re-updating of the past in the present, the better to decode and re-invent the universals of yesterday and today.