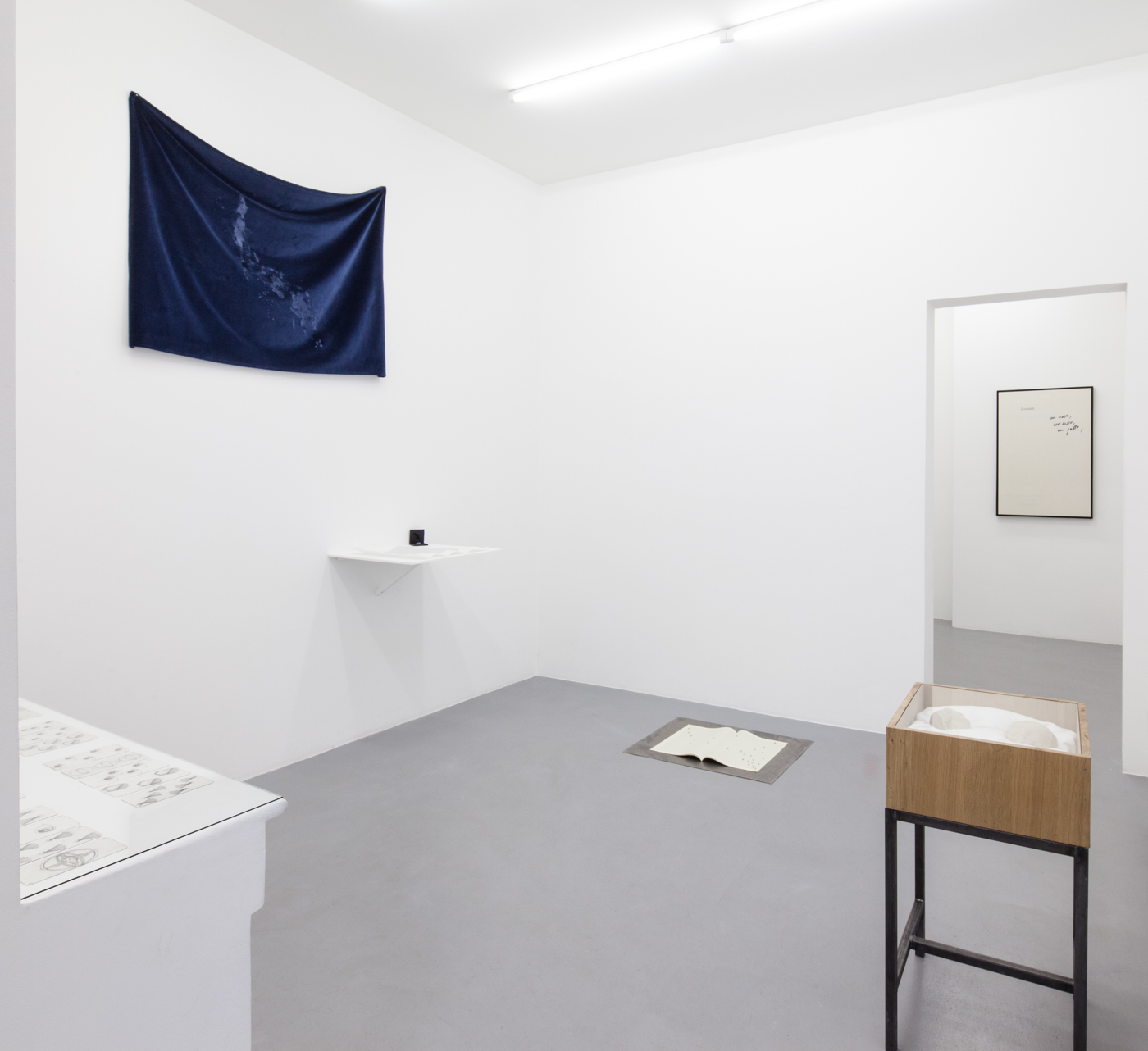 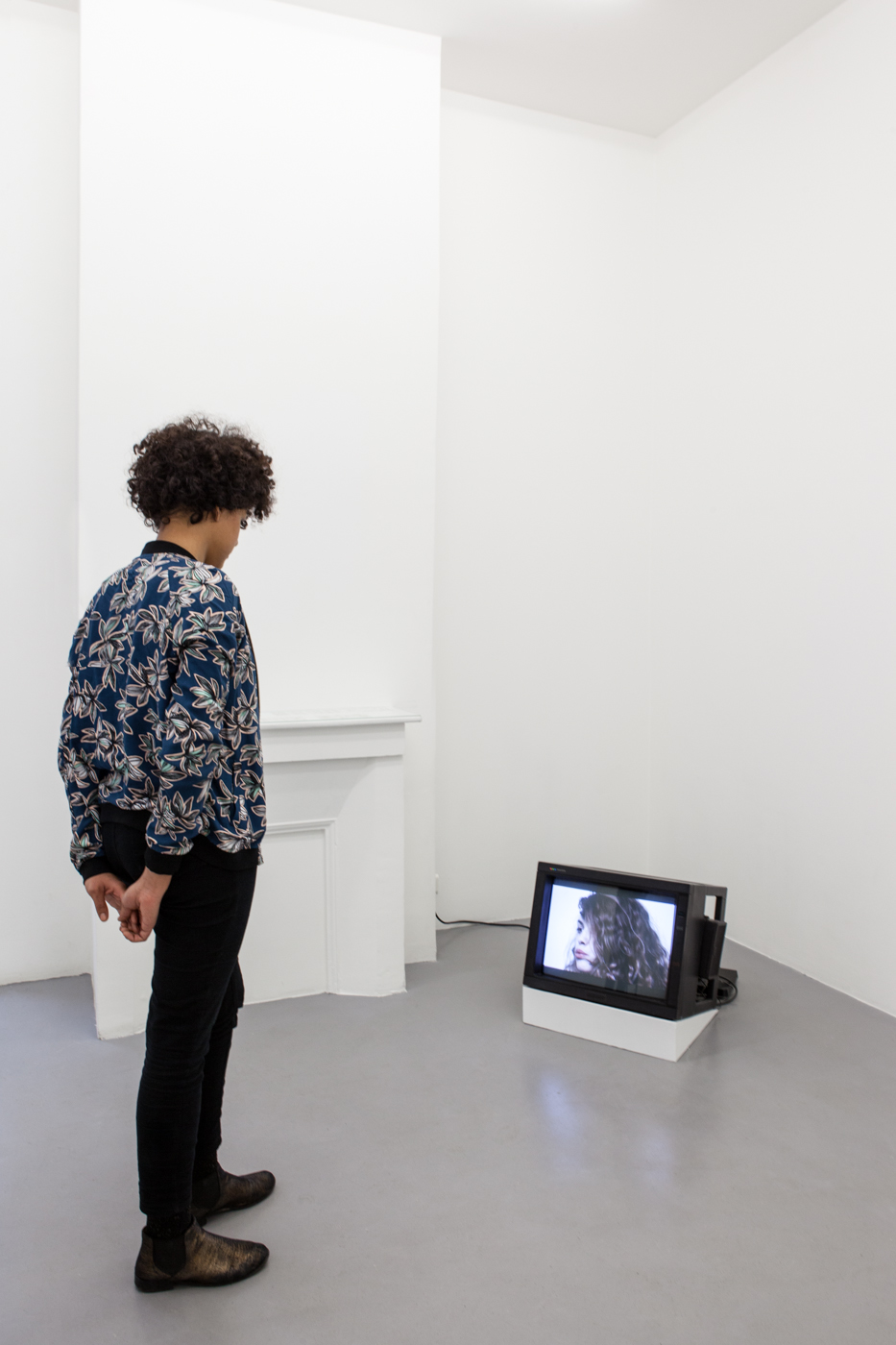 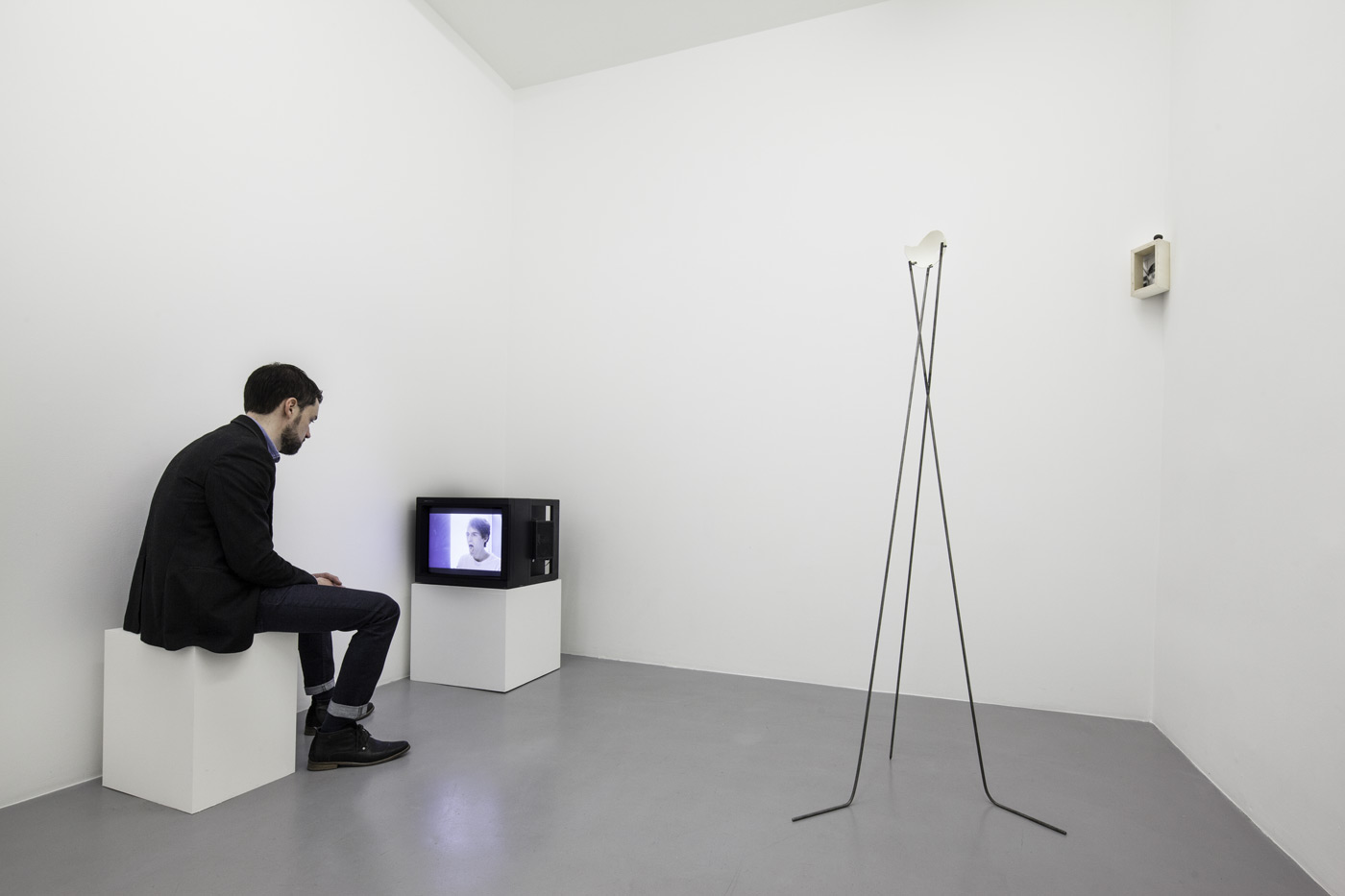 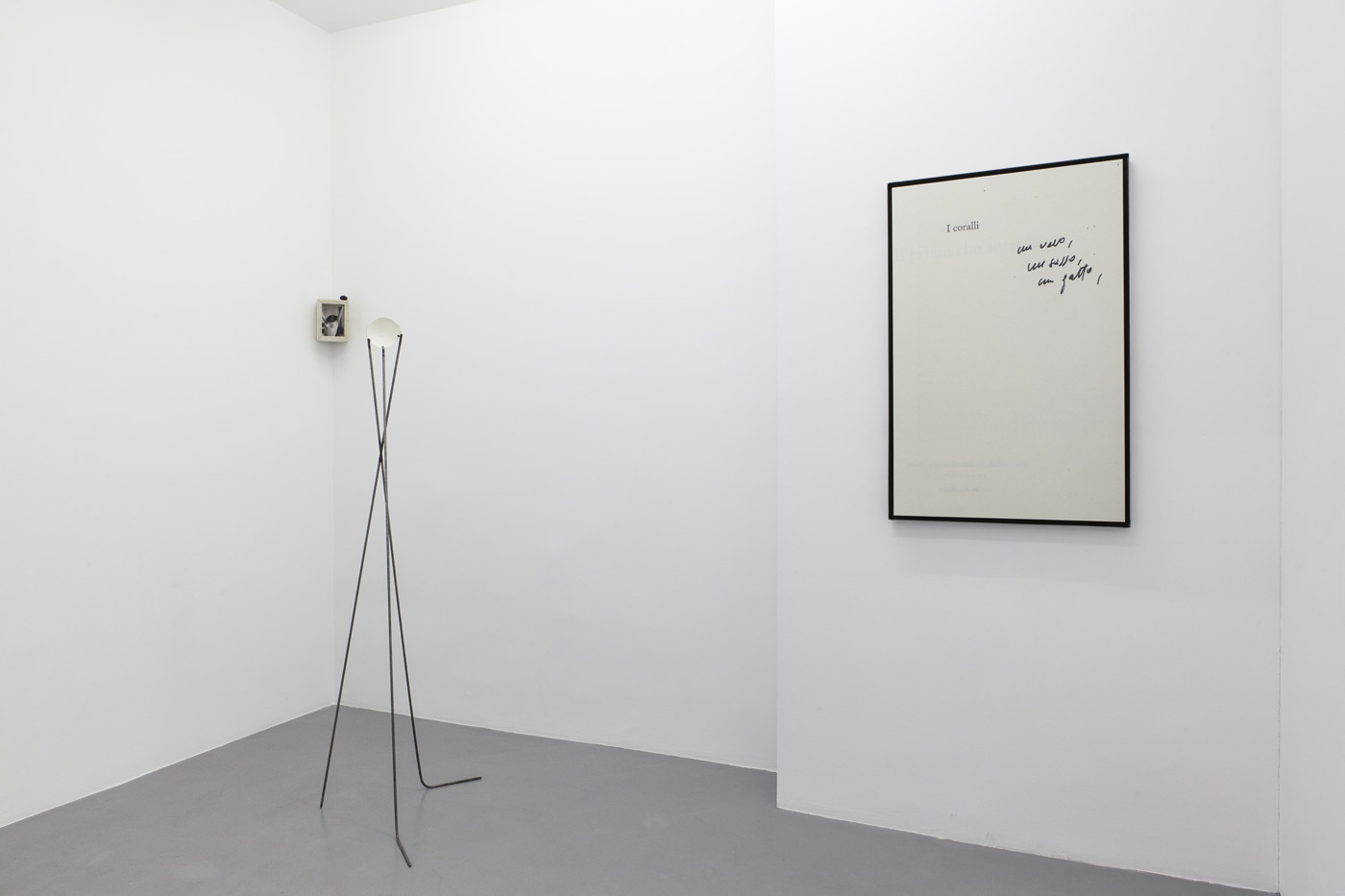 "I stretched out in the grass, my skull on a large, flat rock and my eyes staring straight up at the Milky Way, that strange breath of astral sperm and heavenly urine across the cranial vault formed by the ring of constellations: (...) a broken egg, a broken eye, or my own dazzled skull weighing down the rock, bouncing symmetrical images back to infinity."

Georges Bataille, Story of the eye, 1928

The fragile structure of Margaux Bricler's first personal exhibition originated from a dedication signed in a book. On an almost blank page, a swift and mysterious hand left a triptych of names, functioning like metaphorical symbols open to interpretation: An egg, a pebble, a cat.

Bricler, whose past artistic trajectory was close to conceptual minimalism, takes root this time in the fields of poetic evocation and matter and brings together around ten works, each belonging to a series begun in 2014, la prose du monde (the prose of the world).

The artist uses an aesthetic in which a contemporary, almost surreal romanticism blends with many allusions to the iconography of the Quattrocento and the codes of alchemy; that philosophical discipline which combines physics, astrology, philology, semiotics, spirituality and art.

The repetition of notions and objects, which is deliberately present in the exhibition, gives rise to a curious obsession with the role that chance has to play in our lives. From the organisation of the universe to the impossible position of two dice thrown on a tray, to untameable and capricious love, everything seems to be ruled by secret laws that the artist's works can make visible through epiphany.

It seems that we are being told: It's at the precise point where language becomes obsolete for the delivery of an instable and hidden content that art arises. Art materialises itself here as a vital game, cosa mentale, that the spectator must dare to play on his turn.

To give us luck, the artist simultaneously presents three works involving dice.

The first - La prose du monde #2 (about luck), 2014- transforms the usual logic of the perfect cube which may fall with equal probability on any one of its sides. It features a pair of dice exhibiting a seventh side, a red triangle extruding from the mass. On a vast tray, a square of the same red suggests a possible rule to us; matching the three red surfaces in a difficult balance.

The second suggested game - La prose du monde #14 (∞), 2016 - consists of five azurite dice, a mineral with a high copper content, widely used in the mediaeval and renaissance periods to obtain the blue pigment for heavenly frescos.

On one side of each of the dice, an 18kt gold inscription delicately displays the constellation of the Little Dipper, in which can be found the North Star, indicating the geographical north.

Next to it a map of the sky - that of 17th December 1985 at 10:45pm - reproduces on the same scale the projection of the constellations whilst giving rise to that of Septentrion: here we understand that a tiny possibility exists to cast the perfect throw to make the dice land on the one possibly correct disposition on the Little Dipper.

Finally some dice made of bone and incidentally rolled invoke an impossible melody on a blank music score in
La prose du monde #15 (Euterpe & Tyché), 2016.

Furthermore, this triptych is in some way repeated by La prose du monde #16 (403.291.461.126.605.635.584.000.000 combinations), 2016, a pack of 26 cards on which the numbers have been replaced by letters. The possible permutations between these lettered cards surpass by over one million billion the number of stars in the Milky Way. Amongst this astronomic quantity, just one combination reveals the love story marking the whole exhibition.

The video La prose du monde #10 (the signatures), 2015-2016, is supported by a text by Michel Foucault taken from The Order of Things in which the author exposes the mediaeval theory of resemblances, those that linked the macrocosm to the microcosm.

In the intertwining of spectacular extracts of NASA space missions with certain photograms of Andrei Tarkovski's Stalker and with zoom shots of moles, the subjugation of a body to the planet Saturn is revealed. An air by Antonio Vivaldi, a recurrent composer in the film works of Bricler, supports the narrator's voice in a delicate and elegant balance.

Resting on a pillow are two stones whose shape and dimensions remind us of two skulls; they seem to converse:
"Are you sleeping my love? For as long as I can remember, yes."

"Do you love me? For all eternity, yes."

This timeless dialogue in La prose du monde #17 (the Prosopopoeia), 2016, cannot be anything but our own need to generalise our language to inanimate elements, everything or nothing.

The work most marked by surrealism in the exhibition is without a doubt La prose du monde #18 (an eye, an egg), 2016. A disparate collection is governed by an object which evokes an egg as much as it does an eye, in an inevitable emergence of Bataillien eroticism. Perched on a sort of tripod of human stature, the egg-eye seems to be personified. Through it we can see, in a wooden frame, a small black volcanic rock, also in the shape of an egg and an enigmatic cliché in which the face of a nude woman is covered by a cats' body.

There is no stable and subjacent signified in all of the works; they possess the evocative power to waken ineffable connections in each visitor. The signs which constellate the exhibition are cast with a more or less direct intention, in order to be filled up with meanings, in excess, as we are used to doing in our own daily lives. The same can be said of the photograph of the dedication in the book, La prose du monde #13 (last known portrait), 2015-2016.

Here the echo of Foucault's words returns: "Yet, maybe we would be able to come through all this marvellous swelling of resemblances, without even a doubt that it has been prepared for a long time by the order of the world and for our greatest benefit (...)".

Actually, everything indicates that Bricler's sensitivity and memory-rife outlook invites us and guides us in our experience of wondering through the exhibition an egg, a pebble, a cat. Straight away it is time for us to give ourselves up to this universe woven of correspondences, tasting the meeting between the magic and the scientific and the measure of every person's desire.

A long time ago a certain Roman uttered the phrase ALEA IACTA EST before the Senate. If we literally translate it, it's not fate but the dice that are cast. This translation balances out the cosmologic proportion of the difference between dice, chance and fate.