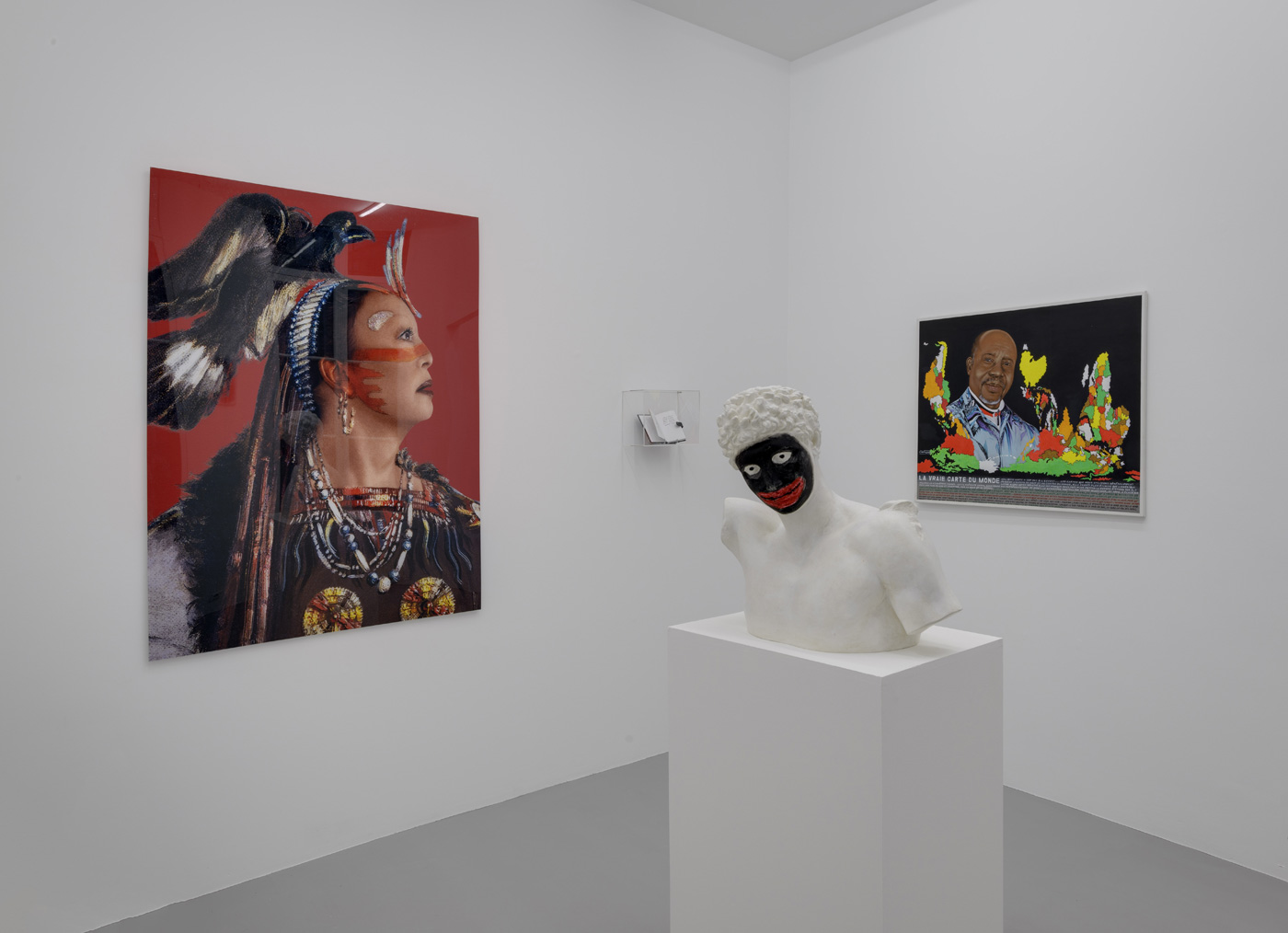 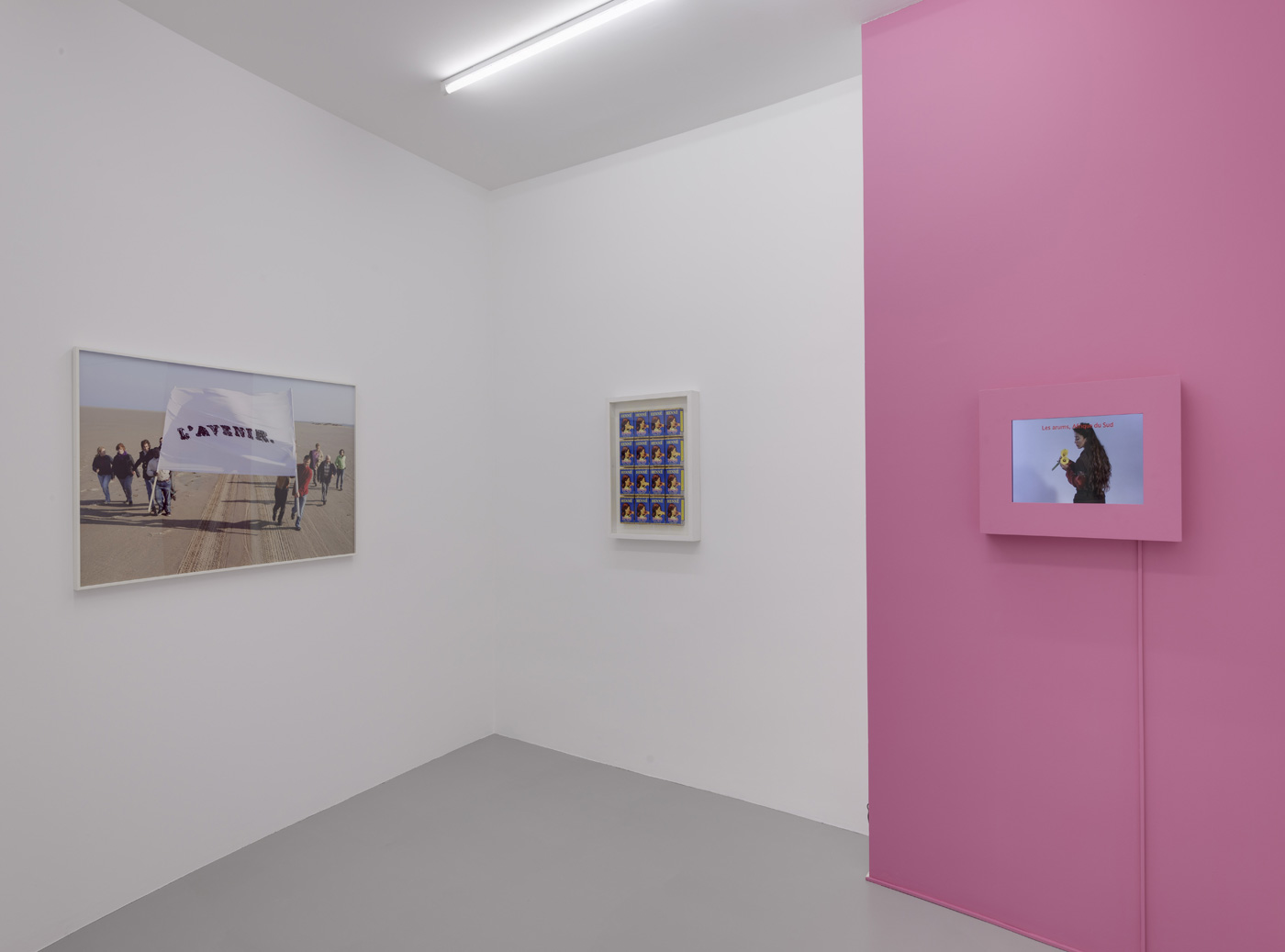 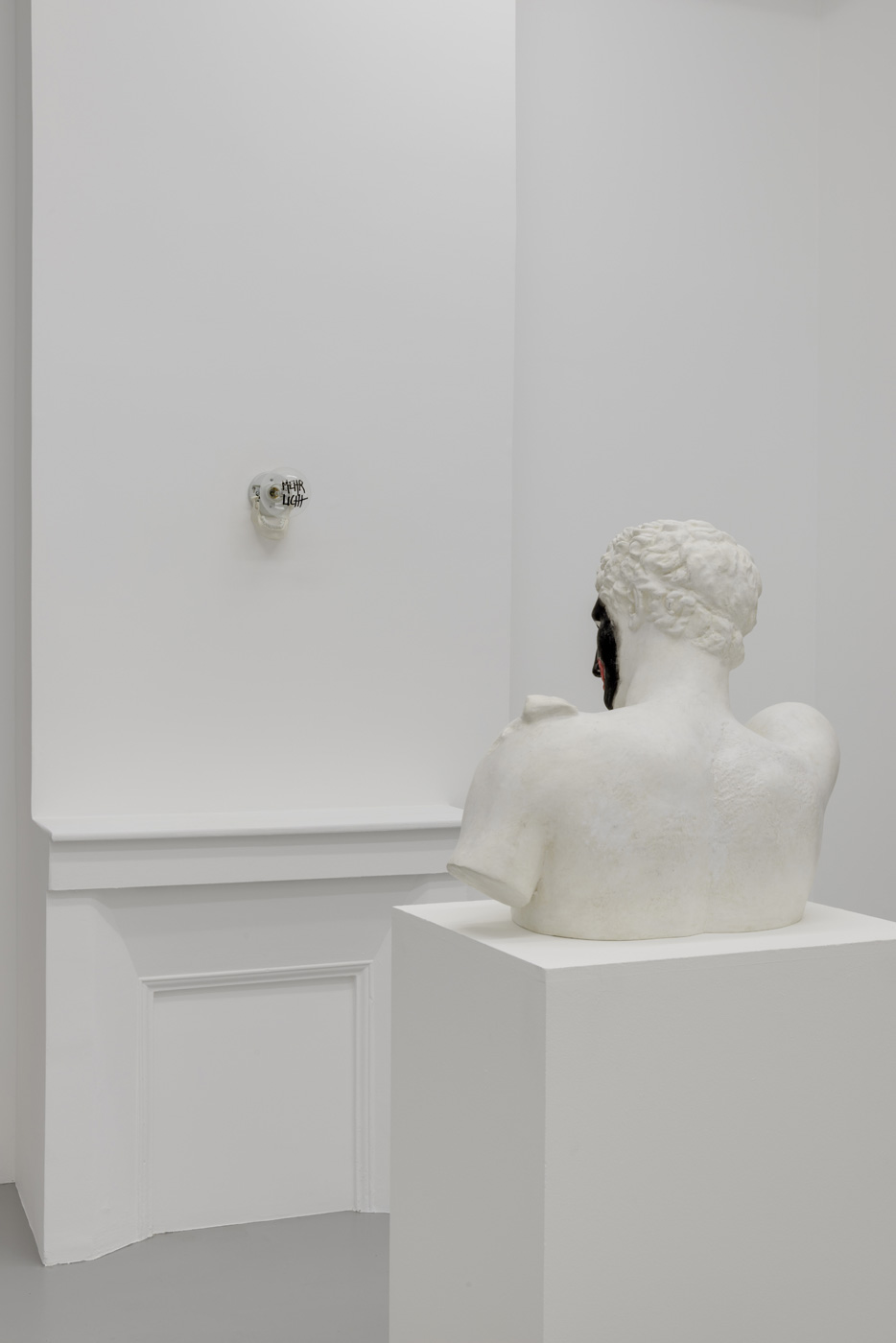 Mehr Licht! is the title of an artwork by Didier Faustino who has simultaneously his second solo show at the gallery.

«Licht! Mehr licht!» are Goethe last words. Ambiguous words. The great man was recording the darkness around him while expressing his desire of a longer life. Mehr Licht! gathers artists commited to humanist values more looking to a bright future than worried about the present time.
On Mehr Licht! (2012) Didier Faustino wrotethese Goethe last words on a big unworking bulb Edison fixed to a human jawbone. As a bedside lamp, this artwork celebrates the discoveries of Goethe in the field of optical science and osteology, appears like a stylized skull which seems to announce the time of a strange wake. As an epiphany echoing Goethe’s one, the sculpture looks like a burlesque trophy.

ORLAN’s artwork, Refiguration self-hybridation, série indienne-américaine #17 (2005), appears as a premonition about a mutant human species issuing from an ever-growing cultural intermingling.
The self-hybridizations produced since 1998 illustrate a hybridization of sexes, cultures, periods and artistic praxes, and lend her method a markedly political dimension that is feminist and open to the world. They pursue the dynamics of an approach introduced in the late 1960s involving themes focusing on the body, sacredness, femininity, beauty, and hybridization.
The self-hybridation, série indienne-américaine were shown in 2007 in the retrospective exhibition ORLAN: The Narrativeat the Museum of Modern Art in Saint-Etienne Métropole (curated by Lóránd Hegyi), then at the galerie Michel Rein in Paris in 2008, at the Musée du Nouveau Monde in La Rochelle in 2009, and in many international exhibitions.

Invited in international biennials and museums worldwide, Dan Perjovschitravels through the world with sketches books. Attentive chronicler of the history on the march, he daily creates fast and incisive drawings, full of humour they are the fruit of his observation of the place where he is mixed with the international actuality of the présent time.
Globalization, global warming, religious and political extremism are his favourite targets. The drawings from these sketch books are reproduced by the artist on the walls of the museums and art centers where he is invited. The exhibited sketches book The patch book (2008-2009) covers the projects of the artist from October 2008 to March 2009 in Bucarest, Bristol, Constanza and Skopje, and the preparatory drawings for his exhibitions ArtFocus in Jerusalem and at the Tri Postal in Lille.The painting of Chéri Samba,La vraie carte du monde (2013),invites us, as frequently in his work, to an irresistible self contemplation.
«I do not see the evil in singing myself», the artist says. Declaration of a free artist who has always lived in this tension: to show himself and to show his art to the world. On this artwork, we can see the artist represented inside the map of the world shouting to the viewer with the title of the work The true map of the world. The artist explains: «Everybody wants to be in the middle of the world, but nobody is able to do it.The idea comes from the exhibition catalogue Magiciens de la Terre (2). When I was reading this catalogue, I noticed small maps showing that the exhibited artists country origin all were coming from the middle of the map. Europeans always believed they were on the top of the world. But it’s not thrue. Me too, I want to be in the middle. We are definitely below but we can be in the middle.»A play on forms and identities is at the heart of Bruno Peinado’s work. By all means necessary is the title of the 2nd album of the Hip-Hop group, Boogie Down Productions (1988). This artwork is a replica of the Hermès by Praxitèle (IVth century bc). As a sanctified work the fragment is like a relic. The party holds for all. The statue is made up the way minstrels who imitated and caricatured black culture in the 19th century.