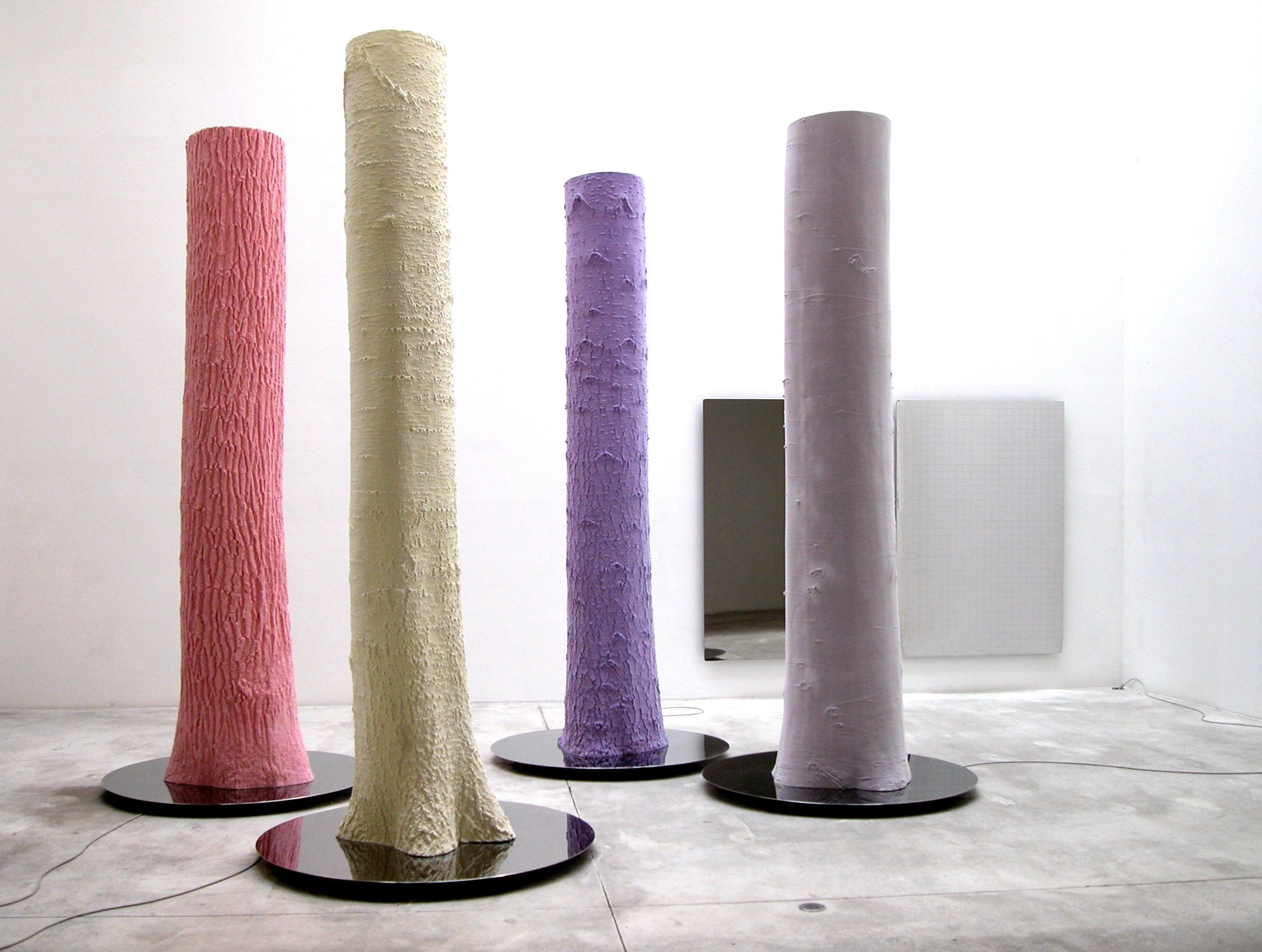 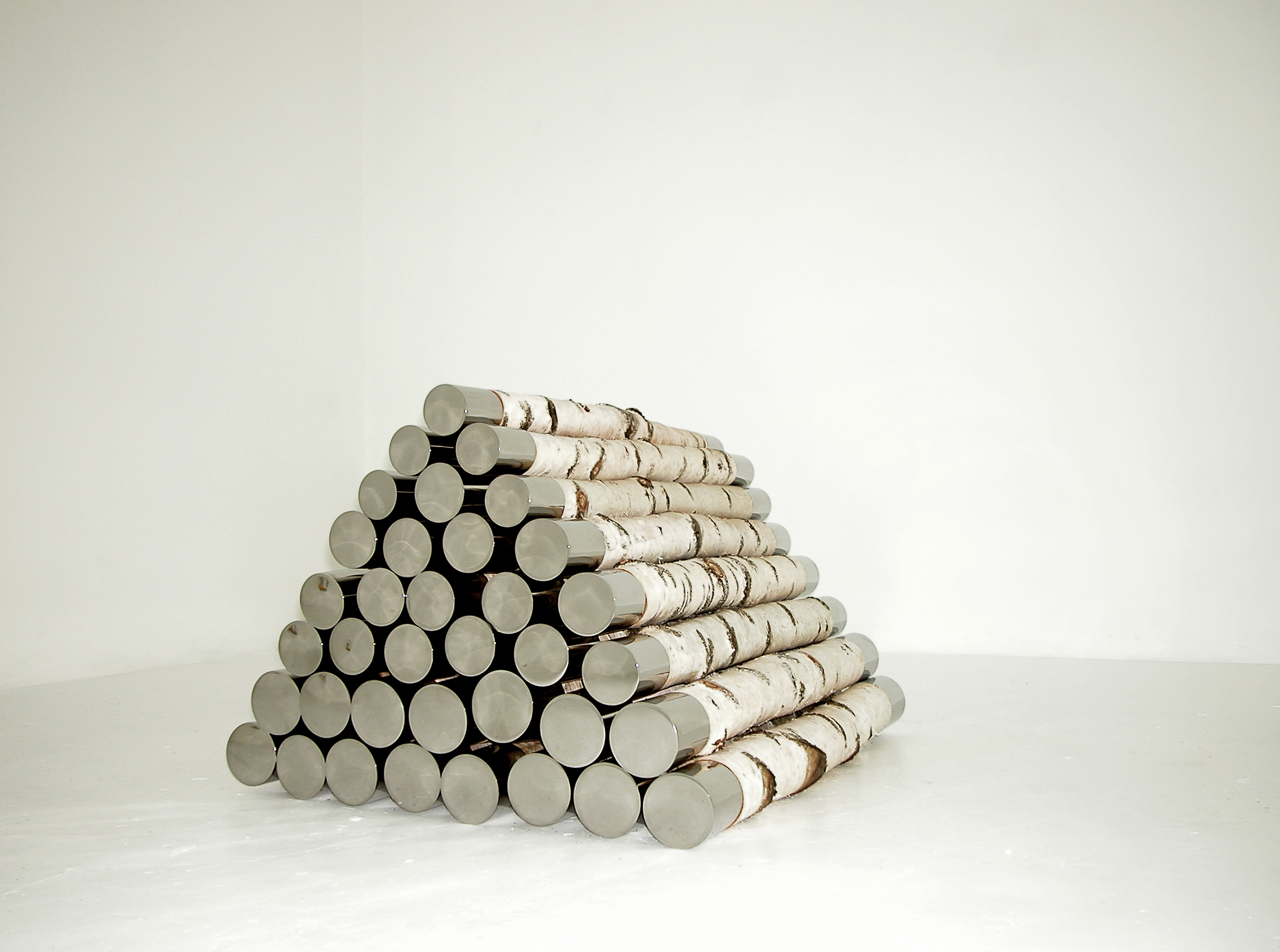 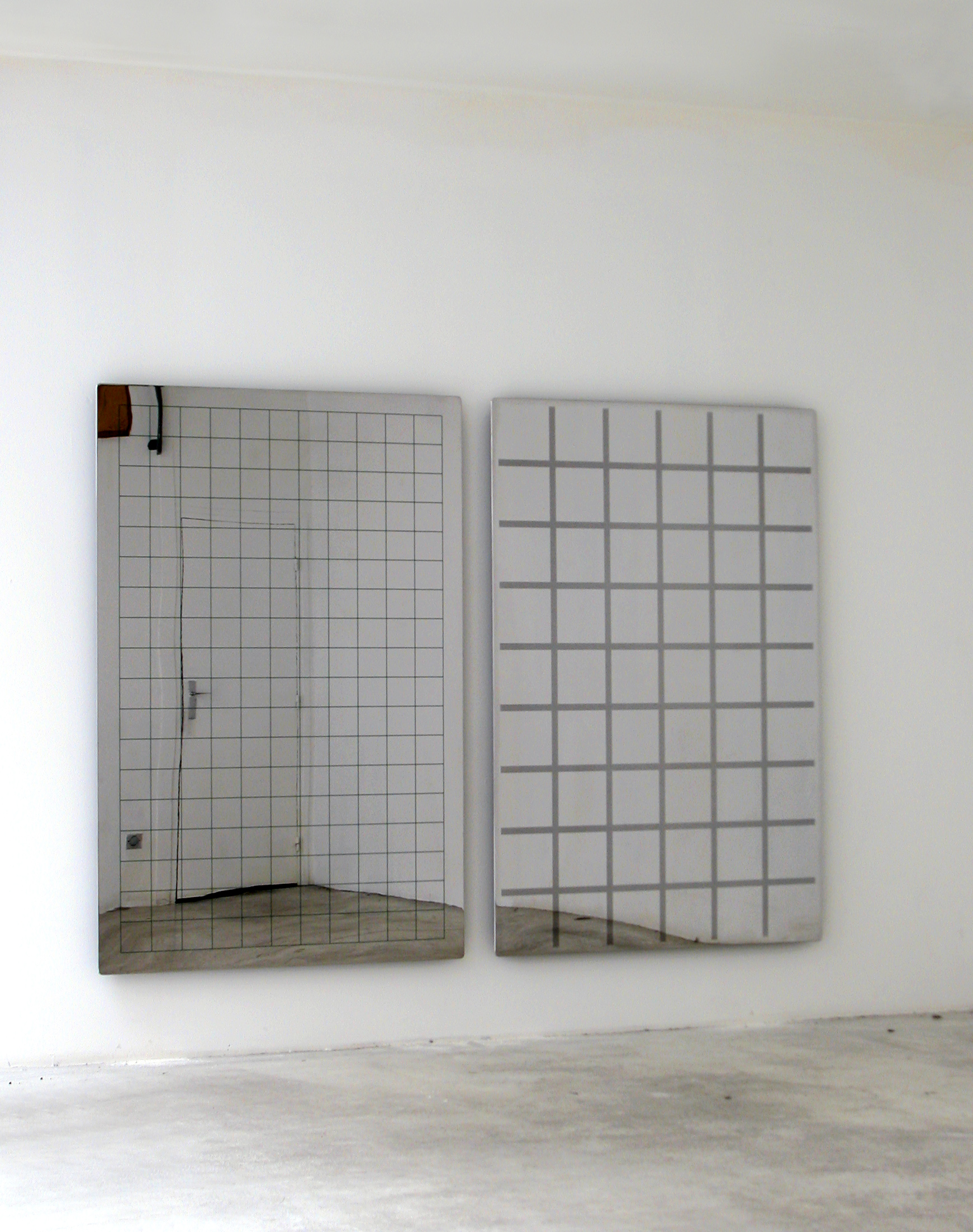 The pieces on view in the solo exhibition by Didier Marcel at galerie Michel Rein give an overall impression of a nature transposed within-at once a "forest" and a "clearing". What is actually involved is something more than a mere transposition (the shifting of a natural element into an artistic context).

For the operation carried out here has to do with denaturation , and pinpoints the artificial and constructed character of the very idea of nature, questioning its supposed "authenticity". The sculptures seem to be an ironical address to this idea of a fantasized nature as "pure" and authentic, and upon which a whole swathe of modern art used to be based.

In the small room, furnished like a living room, the floor has been completely covered with white fitted carpet, on which are placed three-foot long birchwood logs arranged in a perfectly triangular pile. The unexpected combination of materials that are a priori foreign to one another gives rise to a series of contrasts involving cultural terms such as synthetic/ natural, real/ artificial, and domestic/ public. The carpet on the floor refers to the world of the home, to a certain idea of domestic comfort. It also acts as a base in relation to the logs--as its most minimal expression. The shiny ends of the logs add a cultural connotation (or rather something promotional). The steel studs lend a "finish" to the rough objects, comparable to the addition of chrome-plated metal or gilding in use in industrial design (be it furniture, cars or bands of supposedly "de luxe" cigarettes). An addition whereby the design specifically masks its industrial nature, and comes across as gold- or silverwork. An ambiguity on which Didier Marcel's work here on view also plays.

In the large room, four autonomous sculptures form a sufficiently coherent ensemble to give the pieces together an environmental aspect, and conjure up a re-created forest. The four sculptures of tree trunks (beech, fir, oak, poplar) form a kind of set made up of four columns, the embellishment of which consists of the patterns of the bark. The four trunks have been made in a synthetic material, and covered by flocking (a process whereby a fine layer of synthetic fibres is deposited), then mounted on polished steel disks which spin on their own axis. The sculptures are in fact made from plastic casts of actual trees--from being real objects, they become pure motifs, and henceforth involve ornamentation.

Their rational arrangement refers to a landscaped nature, otherwise put, a domesticated, artificial nature--forest as natural area logically organized with a view to some productive end. A dimension to which the material used also refers, as does the choice of colours, which certainly more easily evoke food dyes--pink, purple, white, peach--than traditional multi-coloured statuary. Through the flocking effect, the surface of the trunks likewise calls to mind materials that are used in furnishing.

The revolving bases of the trees act like a boundary, on the same principle as the ends of the logs. The contrast between the polished aspect of the disks and the roughness of the bark calls to mind a scenic device, akin to presentations of precious objects in showcases and showrooms in use in the luxury industry. The animation further bolsters this impression of something stage-directed, which works like an enhancement in every sense of the term.

"Nature", as we understand it today, is a pure product of industrial civilization, and the system of industrial production. The ideology which makes Nature the absolute referent, the ultimate Real, is these days mainly the ideology of industry itself (by way of advertising). Free, virgin, limitless nature as dominant marketing fantasy. For several years, Didier Marcel's work has taken the character of cultural construction, in respect of the idea of nature, as an established fact. A representation of nature systematically mediatized, transformed by culture, coming across as a product, as a response to the primitivist dimension, in some ways naïve or even obscurantist, of certain representatives of Earth Art and Arte povera. The quasi-commercial presentational procedures to which he has recourse may be interpreted as an indirect response to the ideology that underpins these practices.

A series of 120 x 180 cm pictures made of mirror-polished stainless steel, on which are silkscreened grids and patterns of different colours, rounds off the show. These objects have roughly the proportions of doors and windows. Just as the four trees may, in a way, call to mind Robert Smithson's non-sites, so the pictures exhibited play on the same type of paradoxical presence-absence. As casts, the trunks are simultaneously containers and imprints--at once non-sites and traces. The mirror-polished stainless steel disks tend to visually cancel the matter; they work a sort of cut--an operation that samples an element in the real, while at the same time maintaining this reality incorporated by the reflection. The mirror-pictures, for their part, are like non-sites of vision (Smithson himself played on the assonance between site/non-site and sight/non-sight). The pictures refer the eye back to itself, and it is in fact this latter that they give the measure of, more than anything else. The silkscreened grids of the pictures conjure up a lozenge effect, just like the classic metaphor of the picture as window, presenting something real, but whose presence is uncertain--as it happens, a reflection. The fact that their surfaces are thrust in front of the wall, and that they are detached from the architectural medium, emphasizes the effect of weightlessness, and the effect of the paradoxical presence of the pictures. The backs of these latter--a form made of polyester resin which calls to mind the design of certain high-tech objects--as well as the fabric cover which acts as some kind of potential packaging for them--a kind of wrapper or dermis--are part and parcel of the same kind of protocol of acquisition/ consumption which is commonplace in the marketing of luxury products.