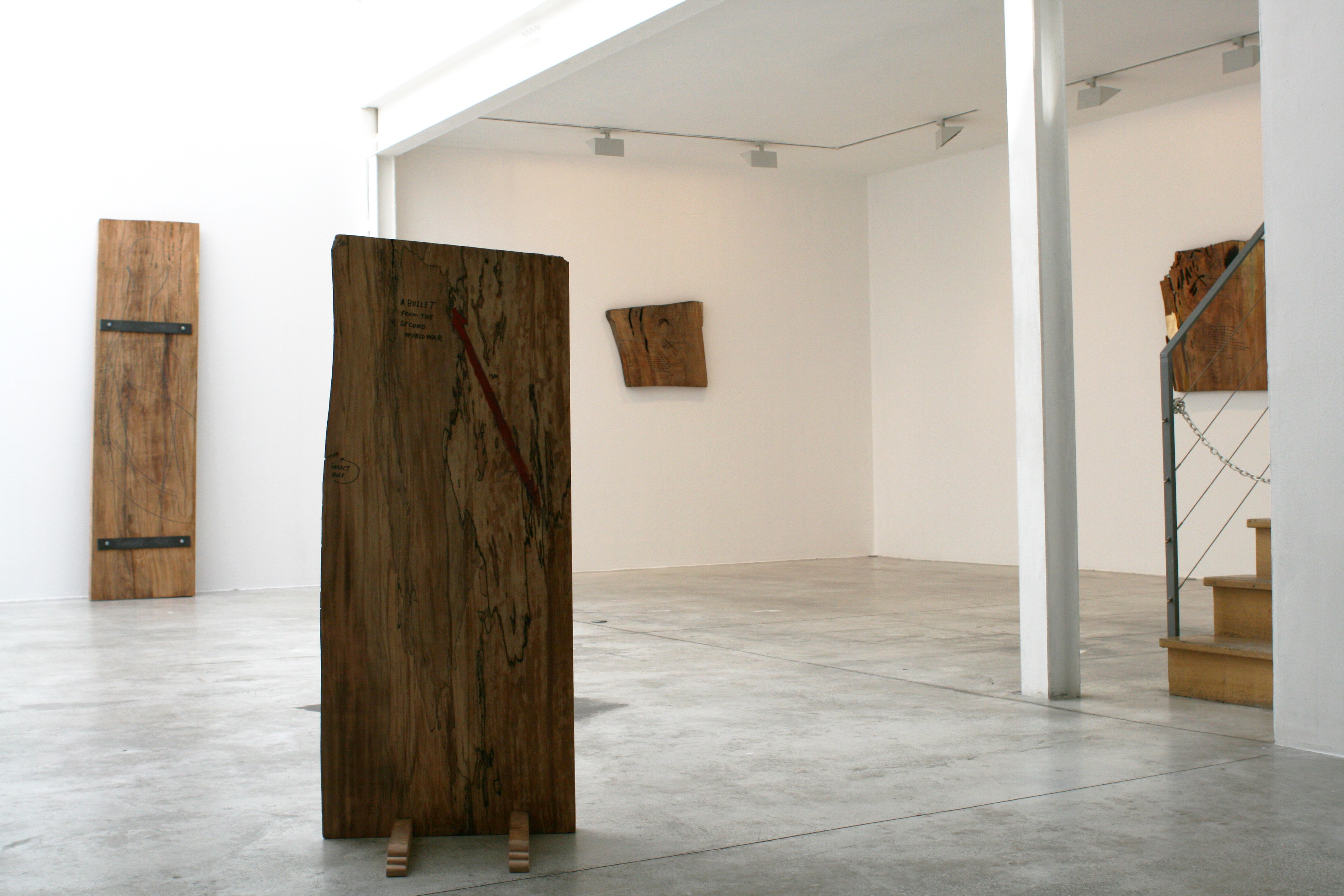 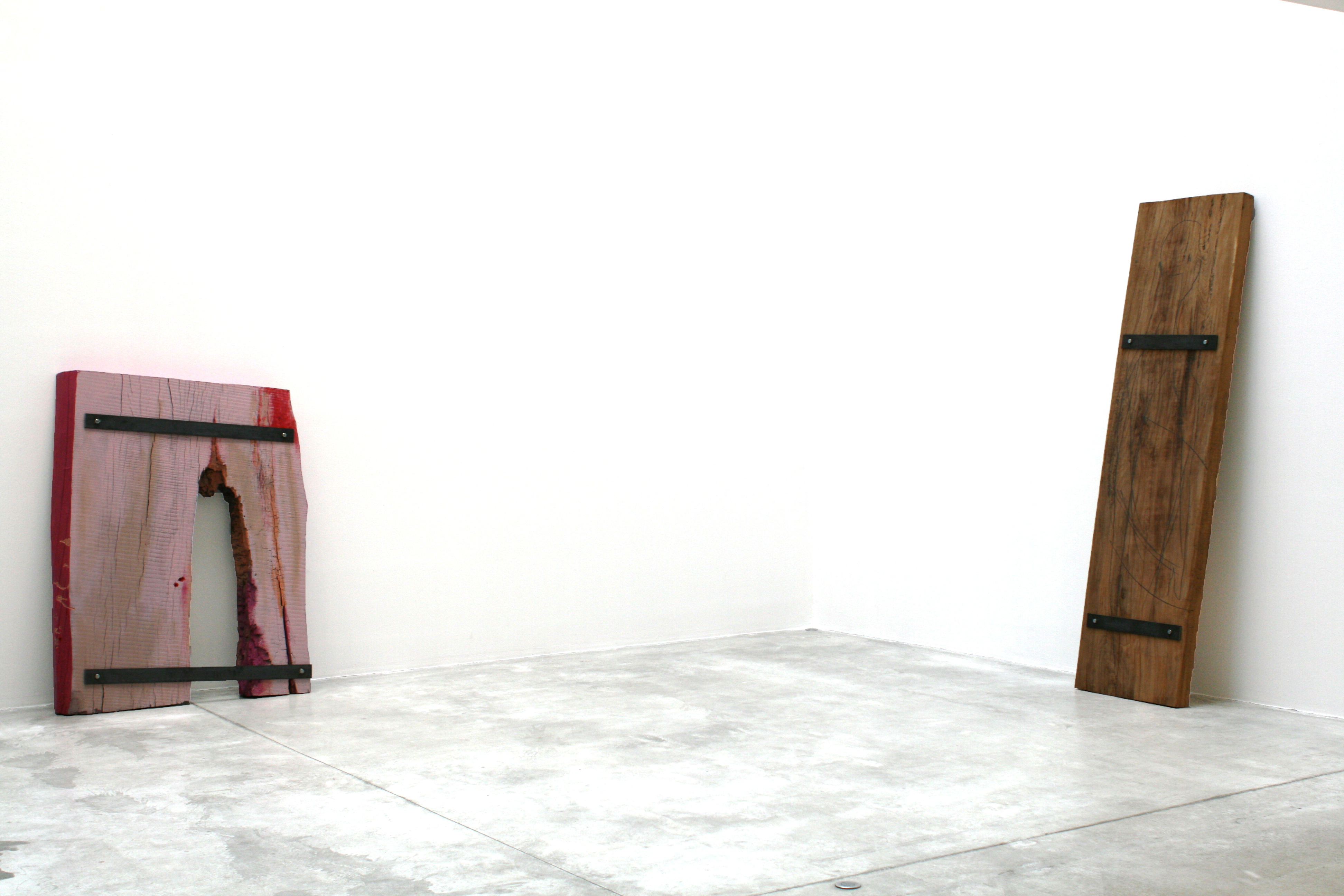 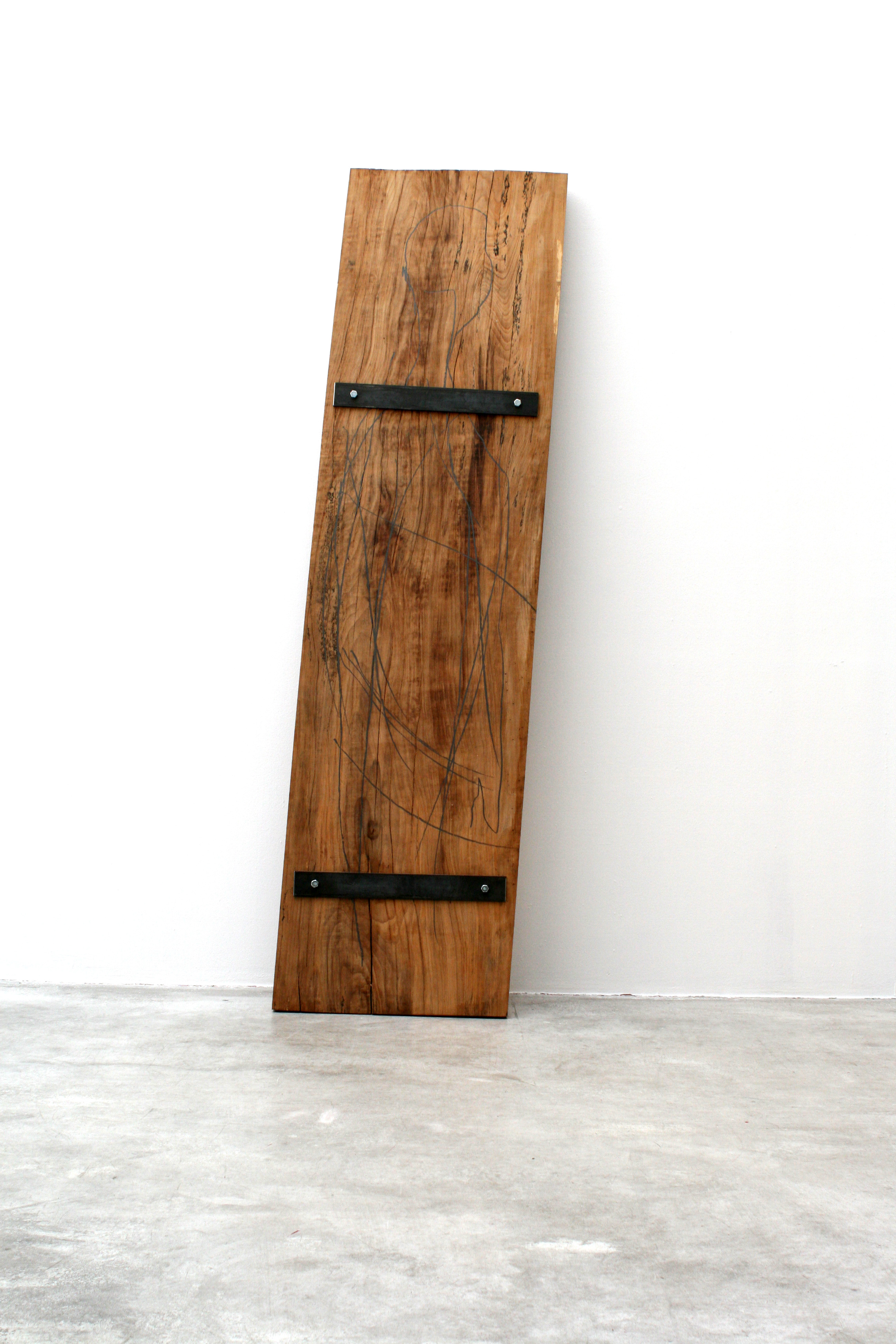 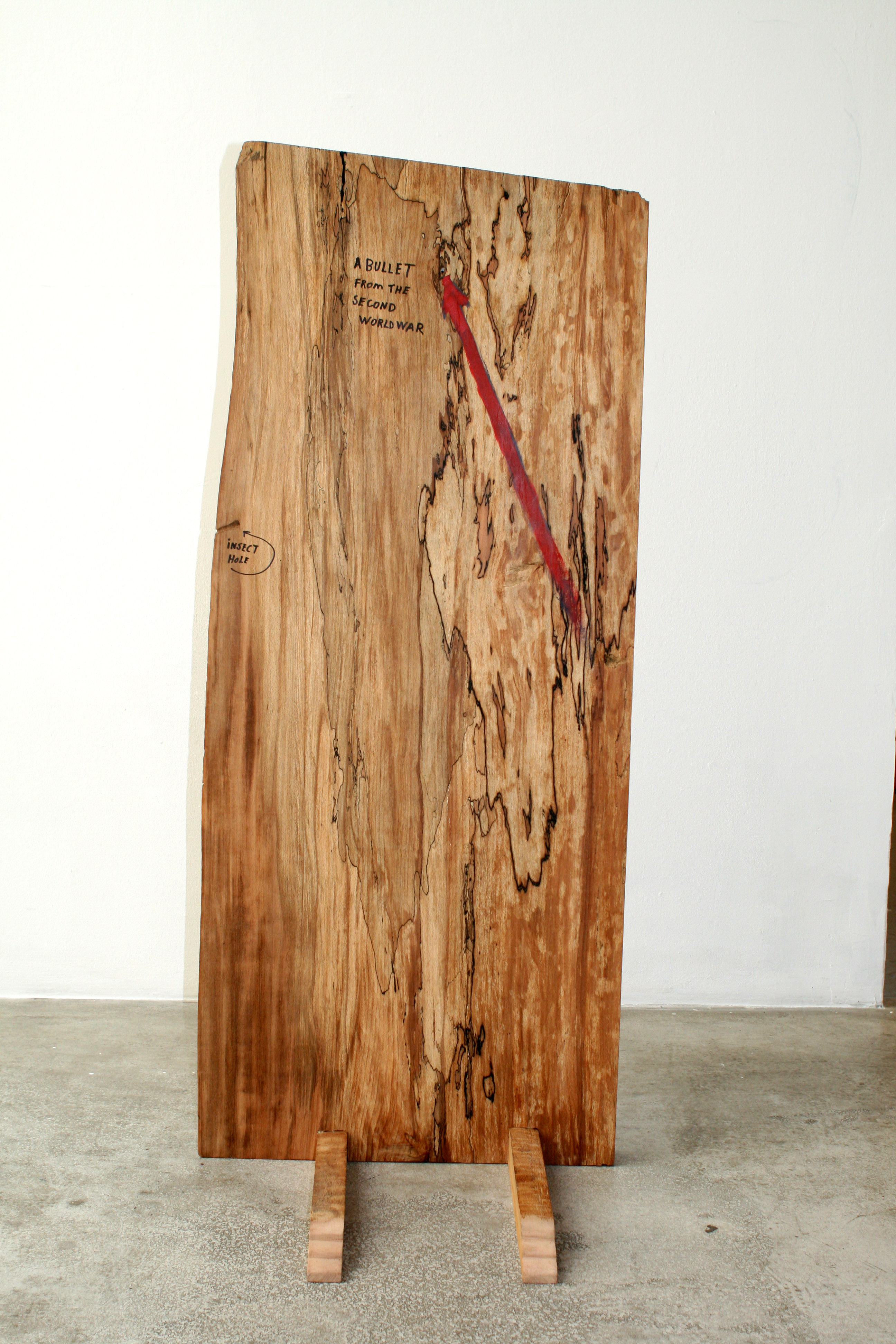 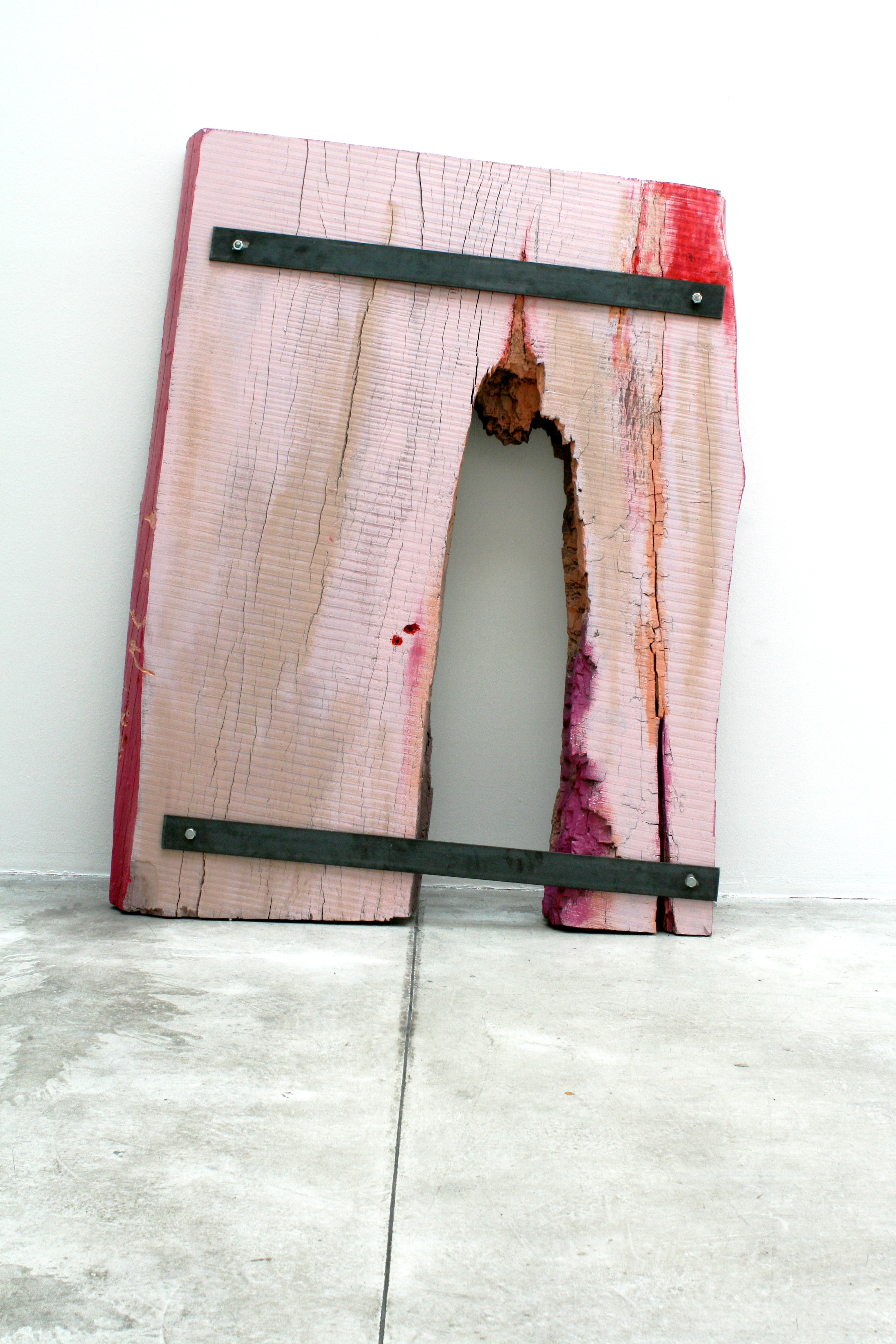 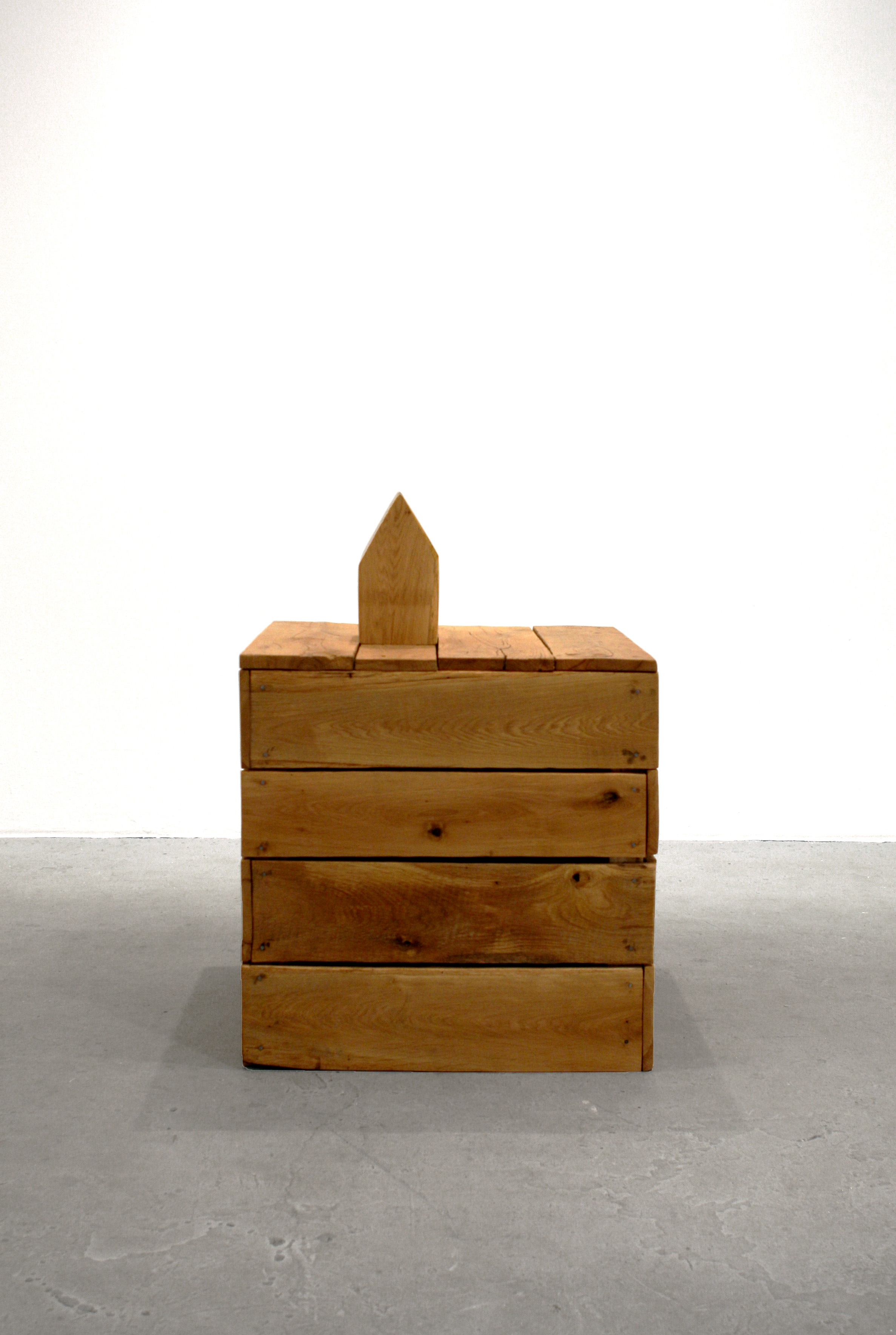 Michel Rein Gallery is pleased to be showing Jimmie Durham’s solo exhibition Labyrinth. Durham first solo at the gallery was An Almost Flying Stone, in 2004. This exhibit is part of a partnership project that involves the Atelier Calder at Saché (June 2 and 3), and the Château d’Oiron (June 23 –September 30).
The works on view in these three exhibitions were produced by Jimmie Durham during his period of residence at the Atelier Calder in 2007.

The Labyrinth is Within You

At the beginning of Labyrinth, there is a meeting with a tree. A beech in Strasbourg’s gardens which fell during a storm. Jimmie Durham sees it as a big carcass lying on its side. “Oh, big tree!” There is no
a priori as far as what use he might make of it. The trunk is covered with declarations of love carved in the bark by successive generations of lovers...  Then the tree’s history is revealed by carpentry, when the artist has it sawn up into thick planks. He duly unearths a new and complex history. The autopsy produces seven bullets, lodged in the heart of the tree since the Second World War. Several seem to have ended up in this wood after passing through a body. A fungus has grown around the copper and lead, and worms and insects have made their tunnels.
Jimmie Durham arrived at the Atelier Calder with this tree, and he had long known he would have to do something with it. It leads him into human folly. It extends the folly of the world. Oh, of course, the problem for an artist confronting such a history is considerable: and why not exhibit this wood as is? Or else process it. Repair it, attack it, turn it into a monolith with no reference made to Arcadia. Get it to speak--with a lunatic’s voice, the voice of the insect installed in the tree, turned into an alienated dragon.
The operations involving water colours, gold leaf and graphite, along with the arrows pinpointing the artist’s actions in an ironical Making-Of, make the labyrinth rant and rave. Poems are written.
Extra rounds are fired. As with the Saint-Frigo, involved here is violence stepped up. An enlargement of the initial gesture. Remember, too, that before civilization, beech trees already stood in the European savannah.
The artist is neither a curator nor a healer: he takes this material into a crazed, poetic place, into the specific madness of art. Abiding by his anti-architectural stance, Jimmie Durham does not construct a labyrinth: he points to it in the tree’s innards and, over and above metaphor, as an echo, in our own guts. Reference is made not so much to the initiatory dimension attaching, in Europe, to the figure of the
labyrinth, but far more to the ancient divinatory arts, prompting people to read the future in the
intestines of a disembowelled sheep. There is no reason for doing this. Apart from human folly.
There has always been a monster in the labyrinth. Brain, body, and entrails are our own mazes. Each one of us has to face up to our own monstrousness. This is the lesson to be learned from Jimmie Durham’s wise and insane maze-like artefact.


Jimmie Durham, sculptor. Born 1940, USA.
Early 1960’s, active in theater, performance, and literature in the U.S. Civil Rights Movement. First solo art exhibit in Austin, Texas in 1965. Moved to Geneva, Switzerland in 1969, returned to U.S. in 1973.
Political organizer in the American Indian Movement, 1973-1980, Director of the International Indian Treaty Council and representative at the United Nations. Director of the Foundation for the Community of Artists (FCA) New York City, 1981-83. Moved to Mexico in 1987, returned to Europe in 1994.
Exhibited in Museum van Hedendaagse Kunst in Gent, Palais des Beaux Arts in Brussels, ICA London (2004), Documenta in Kassel, Hamburg Kunstverein, FRAC in Reims, Wittgenstein Haus in Vienna, Biennale of Sydney (2004), Whitney Biennial (2006), Kunstverein in Munich, Venice Biennale (2005), among others.