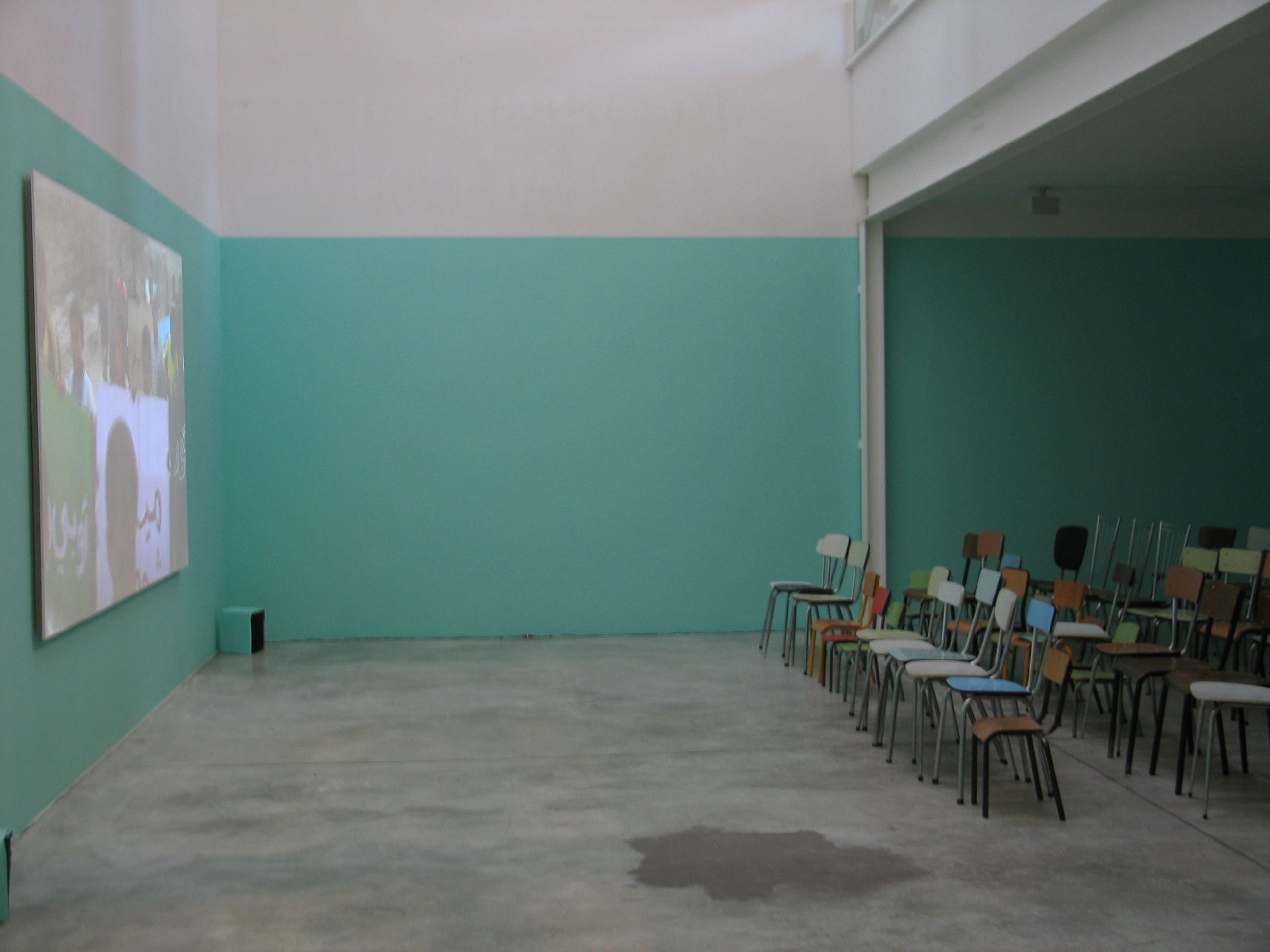 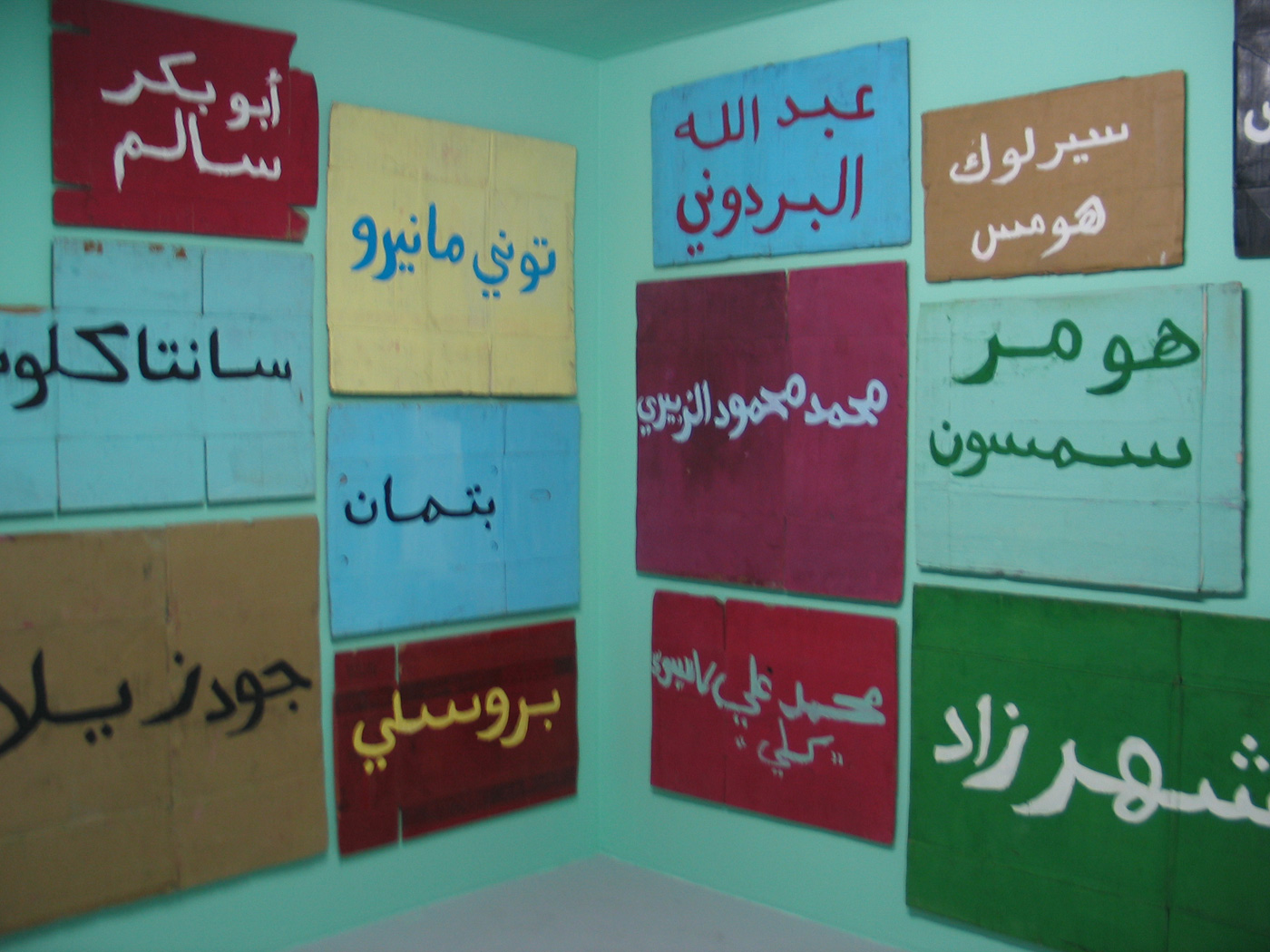 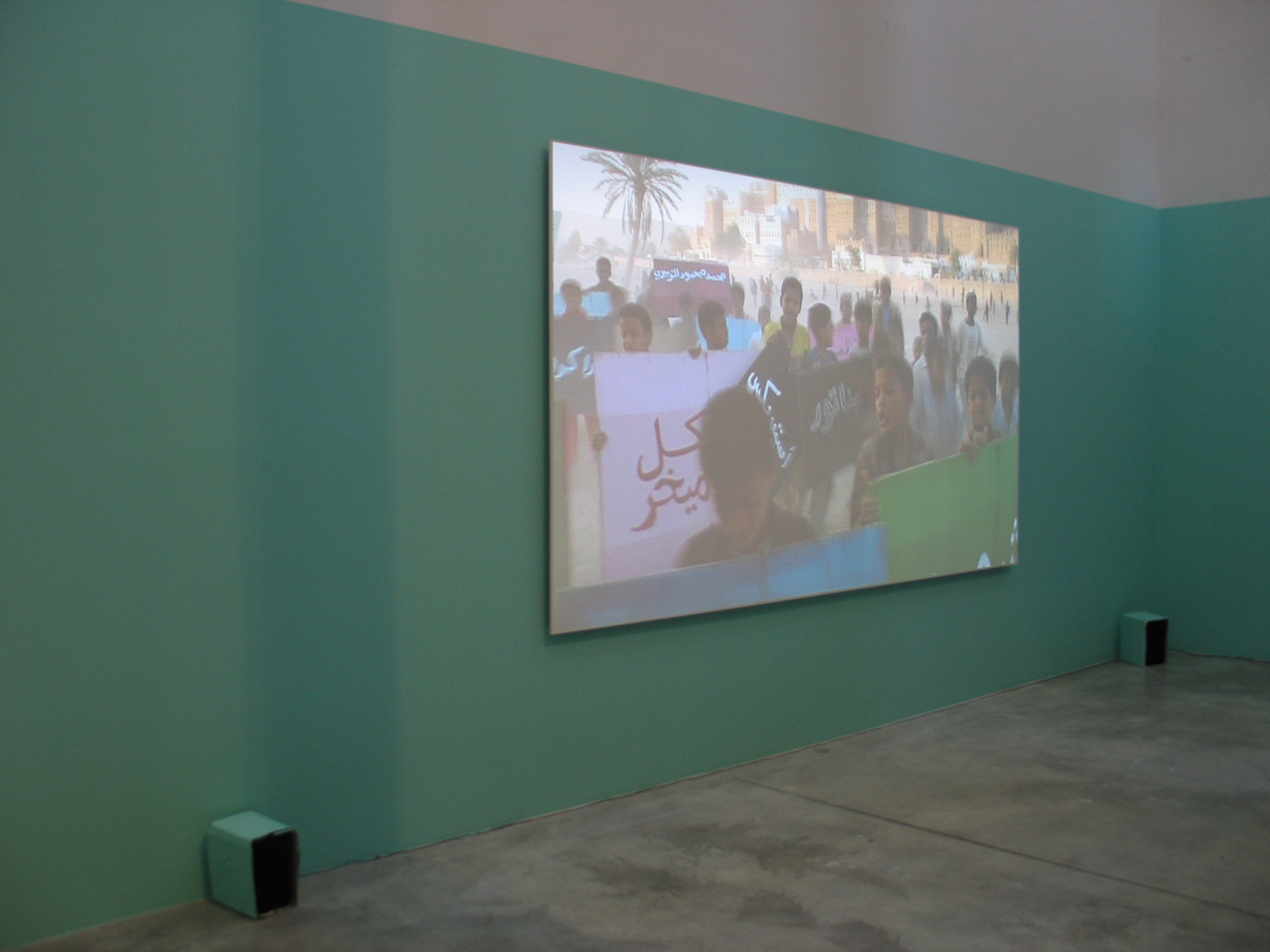 Arabian stars is Jordi Colomer’s second solo show at galerie Michel Rein. Just like for his previous exhibition Le dortoir in 2002, Jordi Colomer is not only projecting a video, he is also installing a complex dialog in which the spectator must find his/her place and construct a point of view that is not directly imposed on him.
In Arabian Stars, Jordi Colomer uses icons of western mass culture in a world where this culture has no root.

The Arabian Stars film (high-resolution master, 38 min.) was shot at the beginning of year 2005 in Yemen. It is staging Yemeni citizens randomly encountered during the trip. The protagonists accepted to join in and to walk facing the video-camera while holding coloured cardboard signs. On these signs the names of famous characters, real and fictional, international and local (Michael Jackson, Pikachu, James Bond or Zinedine Zidane, the singer Abo Bakr Saalem, the poets Al Zubeiri or Albaradoni, the ministry of human rights Amat al-Alim al-Susua…) are written. As their regular occupation is momentarily interrupted by this out-of-place gesture, the improvised performers are still moving in their daily environment: the cities of Sana’a, Shibam, Aden or the desert. Likewise, the words written in Arabic script on the signs seem to bear less obvious meanings in these displaced contexts. A succession of long sequence shots settles the gaze in an expanded time.

The space of the gallery is transformed. The film is projected in a light-green painted room (the colour of Yemeni interiors). Eighty-two mismatched chairs (as an echo of the film’s eighty-two characters) wait for the spectators. The thirty-two cardboard signs are hung on the walls.

Arabian Stars is consistent with Anarchitekton (2002-2004) and (un crime) (2004), both previous projects of the artist’s. In Anarchitekton, a strange character wanders through four cities (Barcelona, Bucarest, Brasilia, Osaka) while waving cardboard models, precarious reproductions of diverse buildings, which can be in turn interpreted as ludicrous standards, utopian provocations or shining banners. In (un crime), a group of twelve people carries bulky letters that build up bit by bit the account of a crime committed at the end of the 19th century, just as it was recounted in the daily newspaper of the time, “le Petit Journal ». The narrative unfolds in the very places were the offence could have taken place.

“I was consciously working within the field of representation; I was totally submerged by the scenery, making every little object, I was locked up on the set… After Le dortoir  I decided to unlock a door, to take a cardboard box out in the street and to work on the stage of reality to see how it could be infected by fiction. With Anarchitekton, I confronted cities with their architectural icons, in (un crime), I tried to see how the city can be inhabited by stories; Arabian Stars is an attempt to visualize all the names which constitute the imagination of mass culture in a context that escapes it, Yemen.” [1] In the three video-works, the increasingly numerous characters drag objects: architecture models, bulky letters, signs bearing names, all made of cardboard. “Yemen is the context and the terrain is reality.” 2 According to the writer Eduardo Mendoza, “It is not easy to imagine what these characters represent in Yemen: We’ll never know what the setting for Sherlock Holmes is in the imagination of a Bedouin.” 3