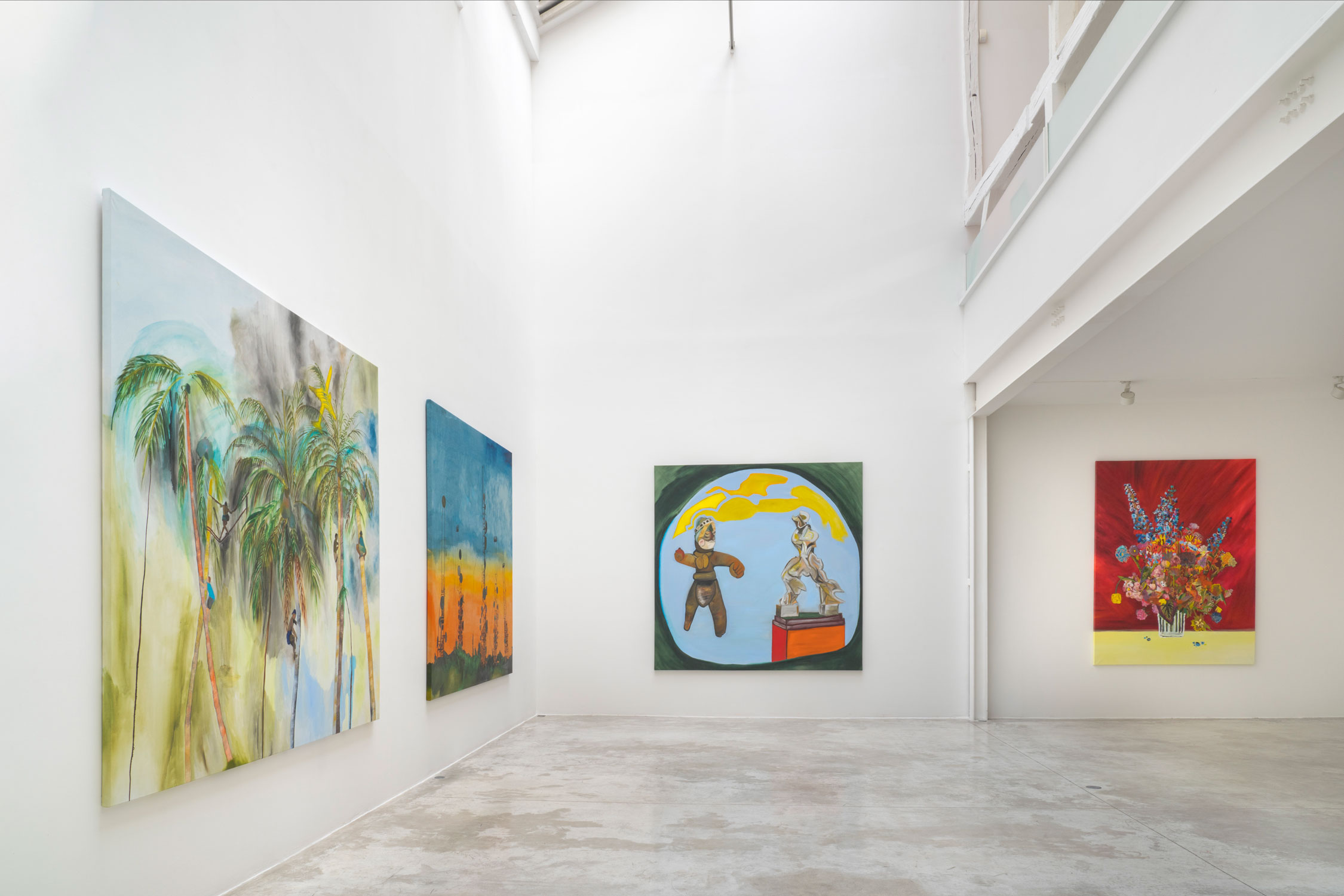 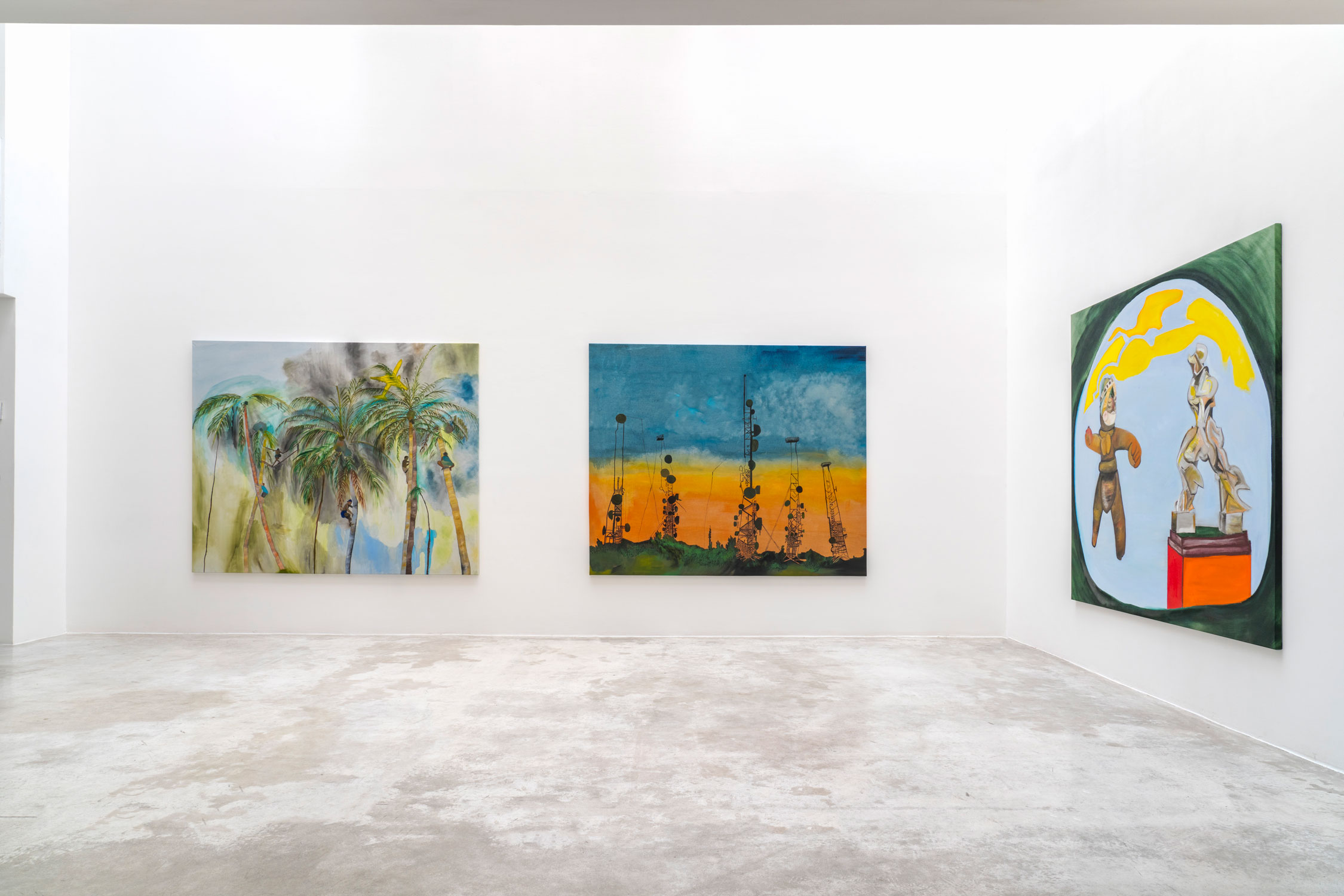 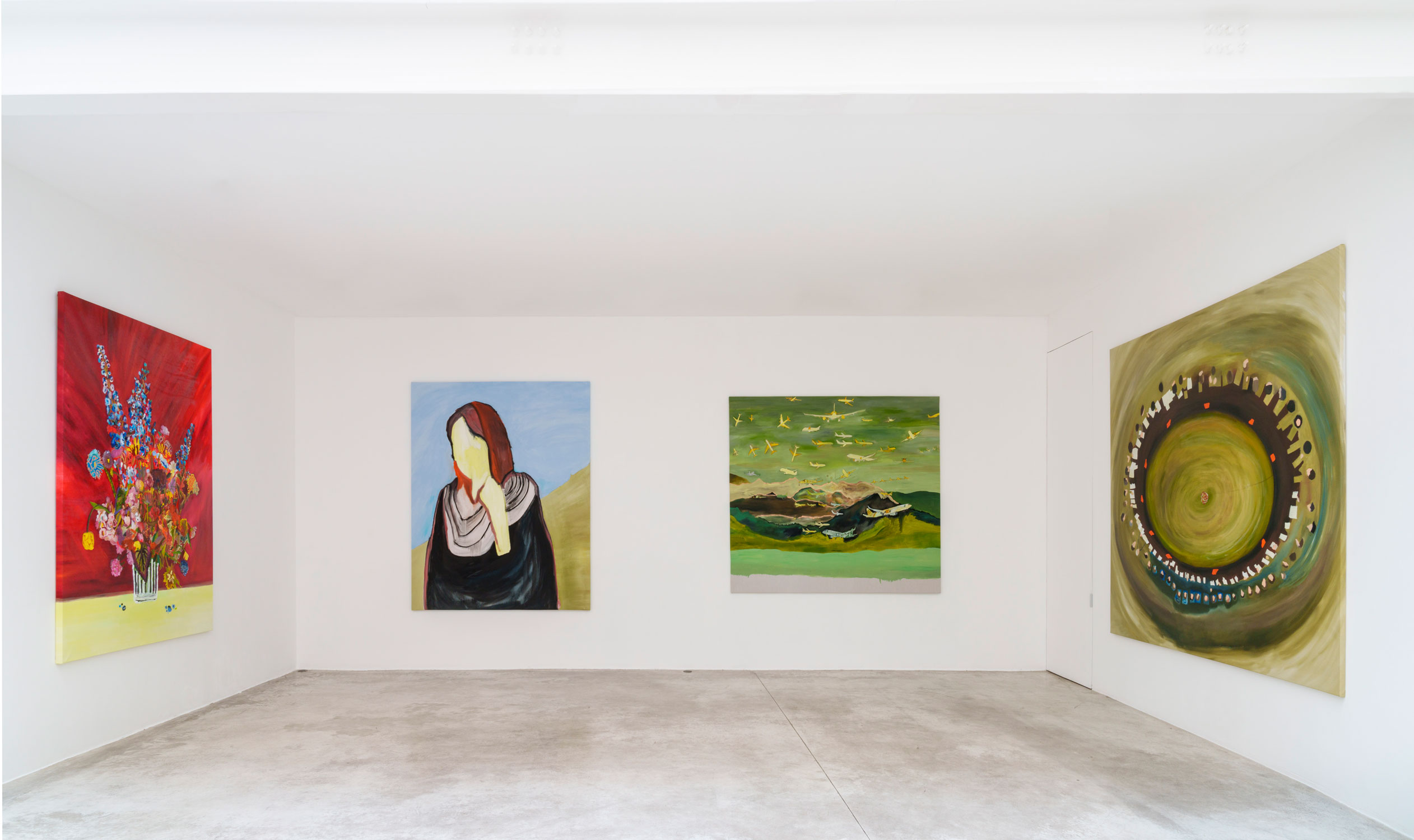 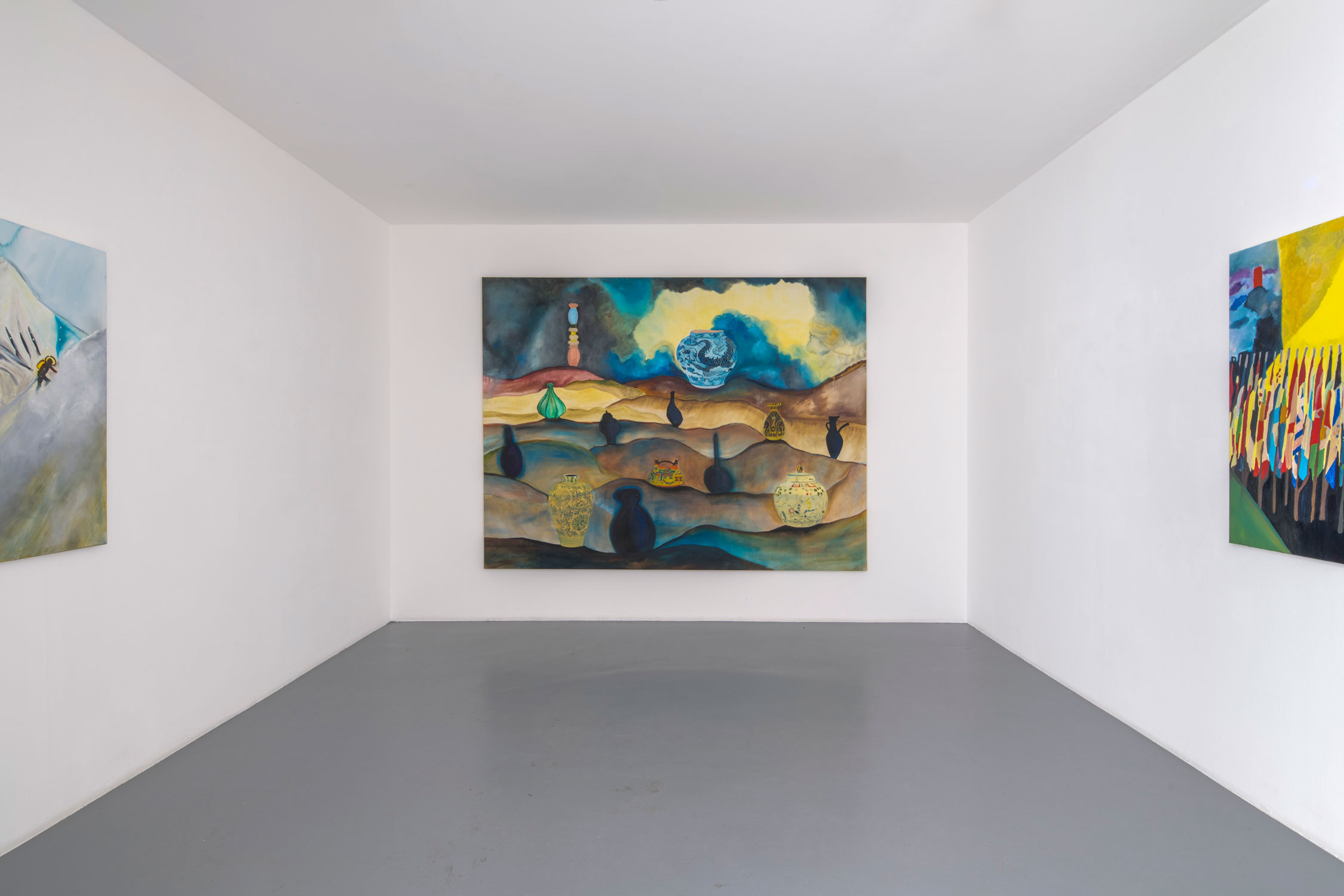 For her second solo exhibition at the Michel Rein gallery, Mariana Bunimov (Caracas, 1972) represents moments that draw on fantasy as much as on reality. There is a kind of theatricality in her paintings. The content of them – as well as the juxtapositions and encounters between them – create situations that offer us different ways of interpreting our world, that suggest other possibilities. Perpetually oscillating between the past and the future, her gaze refuses to take the easy route of linearity; fragments of distant worlds come together to keep questioning us.

Bunimov positions herself as a keen observer of the complex realities of an era in which certainties seem to be crumbling like sandcastles under the weight of wars, pandemics, global warming, poverty, and more.

In one of her works, Unique Forms of Continuity in Space, the player of an ancient Mesoamerican ball game* squares up to Umberto Boccioni’s Futurist sculpture Forme uniche della continuità nello spazio (1913). Are we witnessing a serious conflict, a clash of civilizations, or is this a playful encounter, a dialogue full of humour? The enigma of the past is confronted with the vagaries of a future that had seemed to us so firmly planted on its legs of steel.

The binomials proliferate, dissociate from one another and seem to operate in pairs. Their juxtaposition produces new meaning. So it is that the vertical stacks of radio masts, symbols of modernity, appear as technological vestiges whose bases are lost in the tall grass. They lean and corrode under a twilight glow that heralds the end of an age. Their mechanical rigidity is in stark contrast to the bendiness of the coconut palms that Venezuelan peasants are climbing under an endless tropical sun. The coconut harvest is an activity outside of time, beyond the orbit of any technological context. Only the details of the peasants’ clothing and the presence of an aeroplane indicate a connection to the contemporary era.

Table ronde features faceless men, busy in front of stacked pages with no visible content: a Kafkaesque depiction of international bureaucrats making decisions for the rest of the world, caught up in a briny whirlwind at the centre of the painting. This depiction of an anonymous collective hangs alongside the painting After Mahsa Amini, which recalls the works of Gary Hume. The faceless Madonna questions the relationship between the collective and the individual: the potentially tragic consequences for individuals of decisions made in an impersonal and abstract world.

In Une petite histoire de la céramique, clay vases suggestive of distant eras and territories (Peru, Mesopotamia, China, etc.) give tangible form to the richness of cultural diversity. This little story celebrates both the common threads of a thousand-year-old art form that is practised all over the world and the diversity of multiple aesthetics. The vases float on sand dunes that seem to have swallowed up the rest of the world, becoming silent witnesses of othernesses that now resurface, of multiple possibilities. Once again, the contrast with another of Bunimov’s paintings is striking: in Flight Radar, a hazy sky is criss-crossed by dozens of planes in flight, standardised products of an industrial civilization that is permanently expanding.

It might be in the tone of the majority of these canvases – in these suspended narratives, without illusion or melancholy – that Bunimov’s world comes to life and assumes its colour. Through the particular arrangement of a bouquet of flowers in a vase, the artist conjures up a kind of nature that is neither wholly domesticated nor absolutely wild, raising the possibility of hope, beauty and joy.

* This ritual game transposed the course of the stars and a cosmogonic gateway, according to a cyclical conception of time ensuring/gu the continuation of the community.