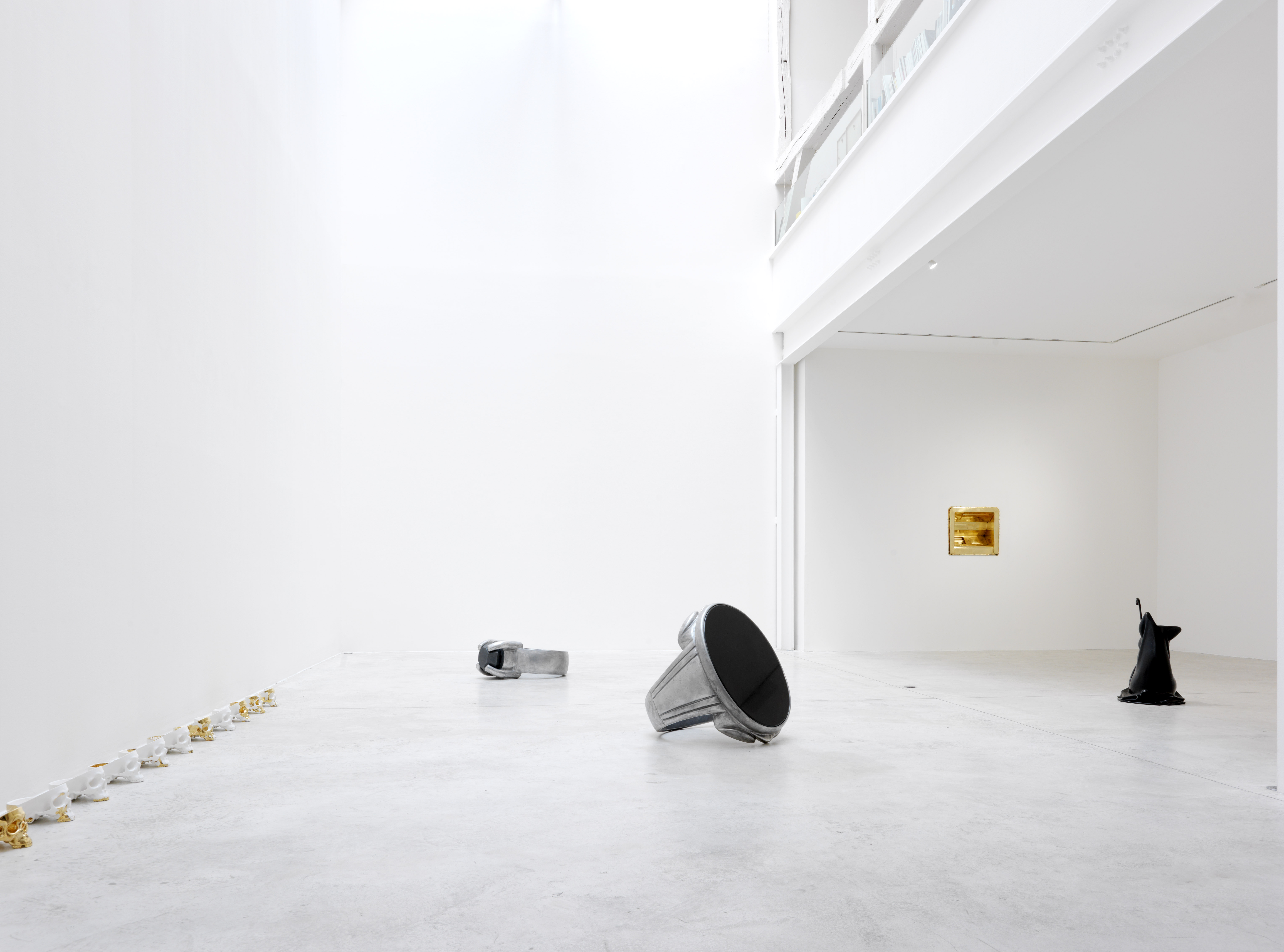 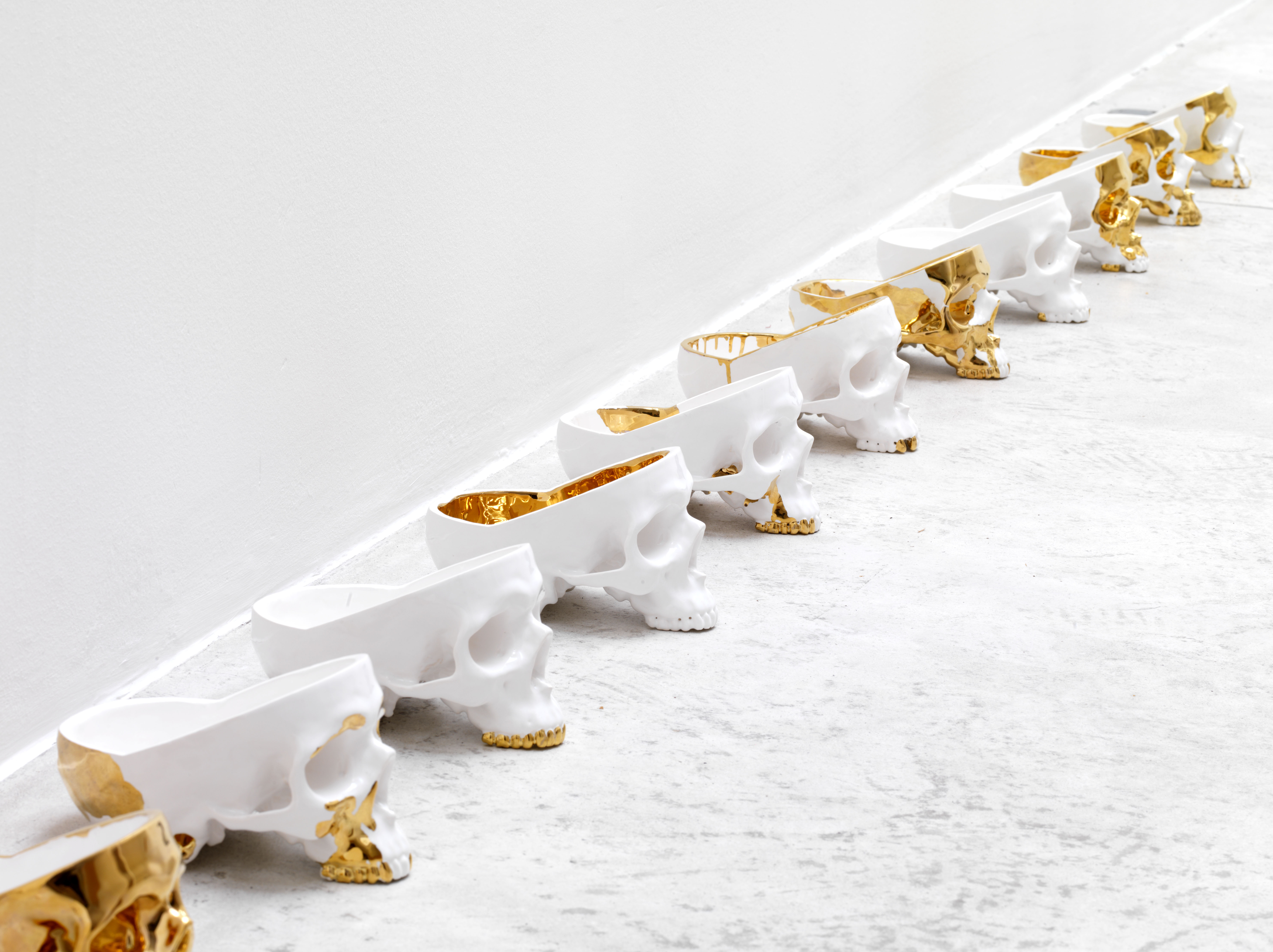 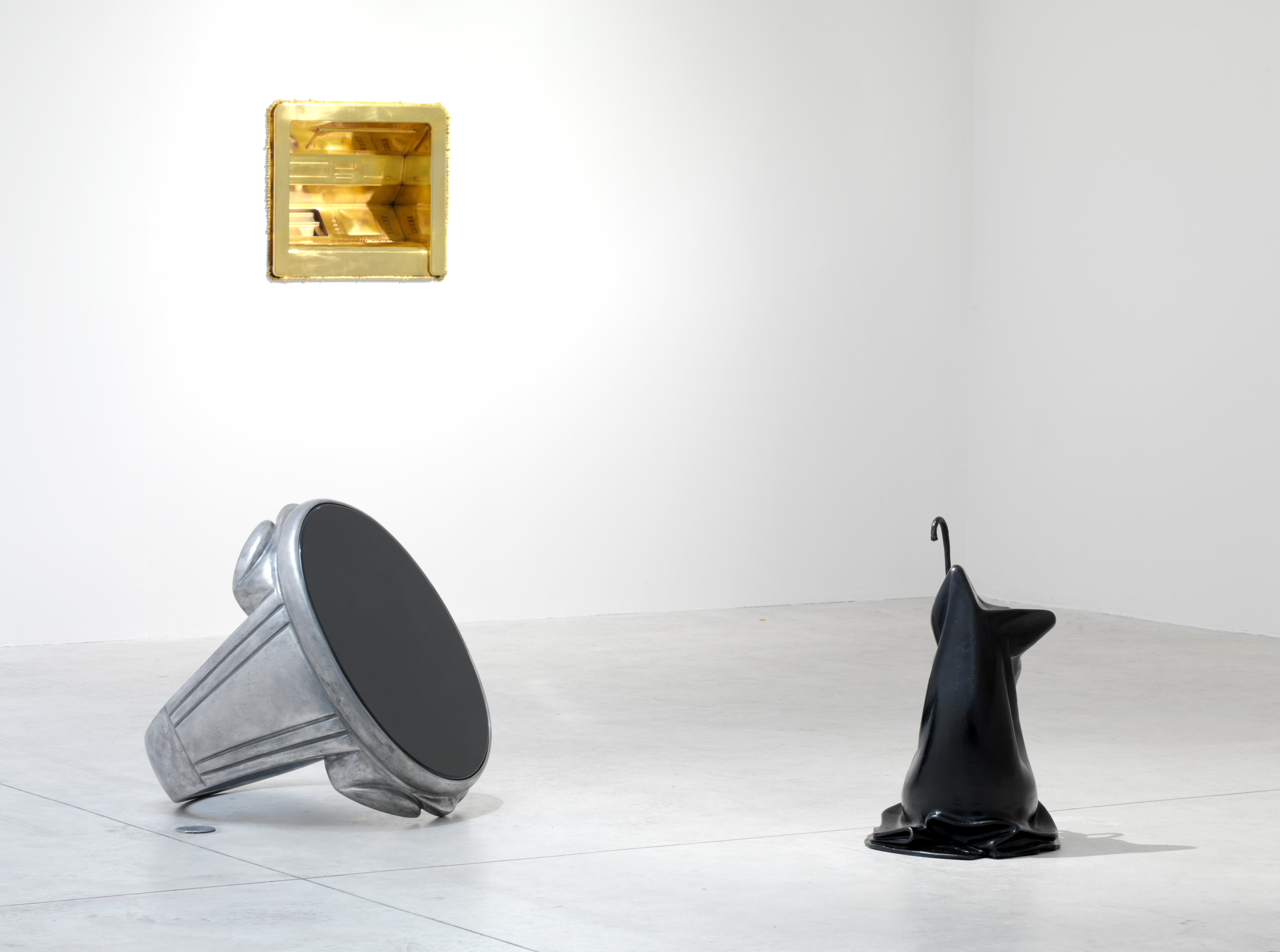 Object, Entity, Sculpture. His, Mine, Yours, Ours…

In his newest one-artist show Stefan Nikolaev is thinking exclusively through objects. This might be quite natural - after all in the world of today objects ever more tightly surround us. But it also might be because the object is one of the most obvious ways to hold on to memories, to capture both the past and the fast changing present, to involve our own selves with the above in a complex web of intertwined moments. It is through objects that we usually explore the world, learn about history, and imagine unknown circumstances. We often try to express feelings and thoughts through objects, we transform them into symbols, and we invest them with meanings and associations.

We award prizes by giving objects, we use objects to commemorate, and objects are also a fact of vanity. Until recently the propaganda of the Marxist-Leninist philosophy was trying desperately to affirm the primacy of the spiritual over the material culture – the latter is obviously winning now while growing and expanding much faster than either our needs or desires. In the history of art the world of objects has offered just as much inspiration to artists as, for instance, the landscape or the human body. Take for example the wine glass in the works of Willem Heda, the copper vessels of Chardin or the famous Ceci n’est pas une pipe of René Magritte…

The objects of Stefan Nikolaev are just as diverse as history teaches us – from the heirlooms to the ATM, from the epergne to the “monument” of the comics’ coyote. Stefan Nikolaev is mixing reality and artificiality in the world of objects; he is transgressing the elitist hierarchies between objects and does not pay attention to their spheres of origin and production. For instance, one of the gigantic rings titled “Nikola” (2009) is a copy of an actual piece of jewelry. It was on the finger of an Orthodox priest, the great-grandfather of the artist, when he died in bed in the hands of a young woman, not his wife. This slightly amusing (though with a tragic ending) story has happened in a traditional Balkan society where people prefer talking about the macho symbolism of the event rather than the specific circumstances of life. Thus the ring grows in importance to the levels worthy of an archaeological relic from an ancient epos. The materials used have similar connotations – they look like coming from the Stone or the Iron Age, from the times of heroes and titans! Stefan Nikolaev is treating in a similar way, like a gigantic sculpture, another one of his personal amulets, his grandmother’s ring” – Donka (2009). It has an even more aggressive character with its powerful chthonic roots holding the stone. One is reminded of the myth about the origins of the ring - from a link of the chain from which Prometheus was freed…

These huge “links” from the chain of family history would give a field day to a semiotics expert – they provide vast spaces for reading into the gender relations in the Bulgarian, Balkan society of the past, their current interpretation, connotations and symbols that are springing up in the works of contemporary artists almost subconsciously though quite persistently.

The human sculls that Stefan Nikolaev seems to be obsessed with – happen to become fruit bowls - What Doesn’t Kill You Makes You Stronger. Fruit of the Loom (2009), and are projecting quite different aesthetical impulses. The porcelain’s fragility, the pure whiteness of the material, the exquisite forms and delicate gilding of the objects – all these qualities could easily add up to a certain kind of “beauty” had it not been for the reference to a bone (the term “bone porcelain” is still used for the kind of material where bone ashes are mixed, though not human). Scientific research maintains that the ability of our brain to recognize and distinguish faces does not make us more “accustomed” to the sight of a skull. This is the reason why for most people a skull is a direct reference to death – Vanitas, all is transitory, all of us – too. Then why - the skull as a memento mori in the u?berdesigned life of the contemporary human being? Or maybe this is a reference to the times of the medieval Bulgarian Khan Krum (8 c. AD) who ordered a mug for wine to be carved out of the skull of the Byzantine emperor Nikephoros Ist whom he defeated in battle? Although within the European Union questions concerning national identity are not always possible to settle through the copyright over ratatouille, for instance, still the specifics of the national cuisine and table arrangements do remain substantial. Maybe the porcelain skulls in the Stefan Nikolaev show are material evidences for the “clan” memory?

If this is the case then we can surmise that the professional memory of the artist is causing the appearance of the solid metal image of The Coyote (hero’s details here - Wile E. Coyote, the “bad guy” for The Road Runner. Both characters invented by the animation director Chuck Jones for Warner Bros. are now over 60 years old) – I Hate America and America Hates Me (2009). Quite naturally any coyote in an exhibition room today will turn into a reincarnation of the famous roommate of Joseph Beuys from his I like America and America Likes Me performance (1974). Although Beuys managed to, formally, not set foot on the actual territory/ground of America during the realization of the event – he had been driven by an ambulance from the airport to the gallery and back, his performance has left an important mark on the artistic life of the country.

The experience of Stefan Nikolaev is a polar opposite - born in Sofia, Bulgaria, Stefan Nikolaev has been living half of his life in Paris, France. It is possible that the differences between these two territories have been vanishing lately. However, the symbolic distance between the (still) brilliant cultural capital of the continent and the (still) attractive and repulsive with its exoticism l’autre moitié de l’Europe (as was the name of the first after the fall of the Berlin wall significant show of Eastern European contemporary art in Paris in 2000), may not be neglected. The artist is positioned between two cultures and traditions, two types of education and languages. Yet he still manages to interpret those and to “translate” himself into both languages while fixing his life impressions and consciously avoiding either the simplistic symbolism or the narrative. His coyote, wrapped in the recognizable felt blanket and shepherd’s staff, has replaced the artist-guru and exists in the space as an obvious question about the possibility of easy love from first sight between the different kinds of collective experiences.

The most luxurious and precious object in the show, both in its material substance and direct meaning, is Cry Me a River (2009). The ATM replica is a focal point of the Stefan Nikolaev kind of cultural mix of iconoclasm and idolatry. It is not just a humble readymade transported into the temple of art; nor is it a simple darling little thing from everyday life though executed in a better material. It is not the typical for pop-art “stretching” of formal means over new objects of desire either; nor is its aesthetic shape the illusion for perfection of things that our memory tends to produce. The exact replica of an ATM galvanized with 24-carat gold is a shiny altar for the cult that we cannot do without.The ironical title of the work should be seen, according to Stefan Nikolaev, as a comment on  the yet unclear future of the bidirectional dependence between the human and the machine; a comment on love and hate; on the need for prosthesis; on the fear of the oracle and his predictions. Of course, Oswald Spengler is right when claiming, “money is a category of thought”. At the same time it’s impossible to forget the inspirational verbal bang of Fidel Castro: “Capitalism is using its money; we socialists throw it away”.