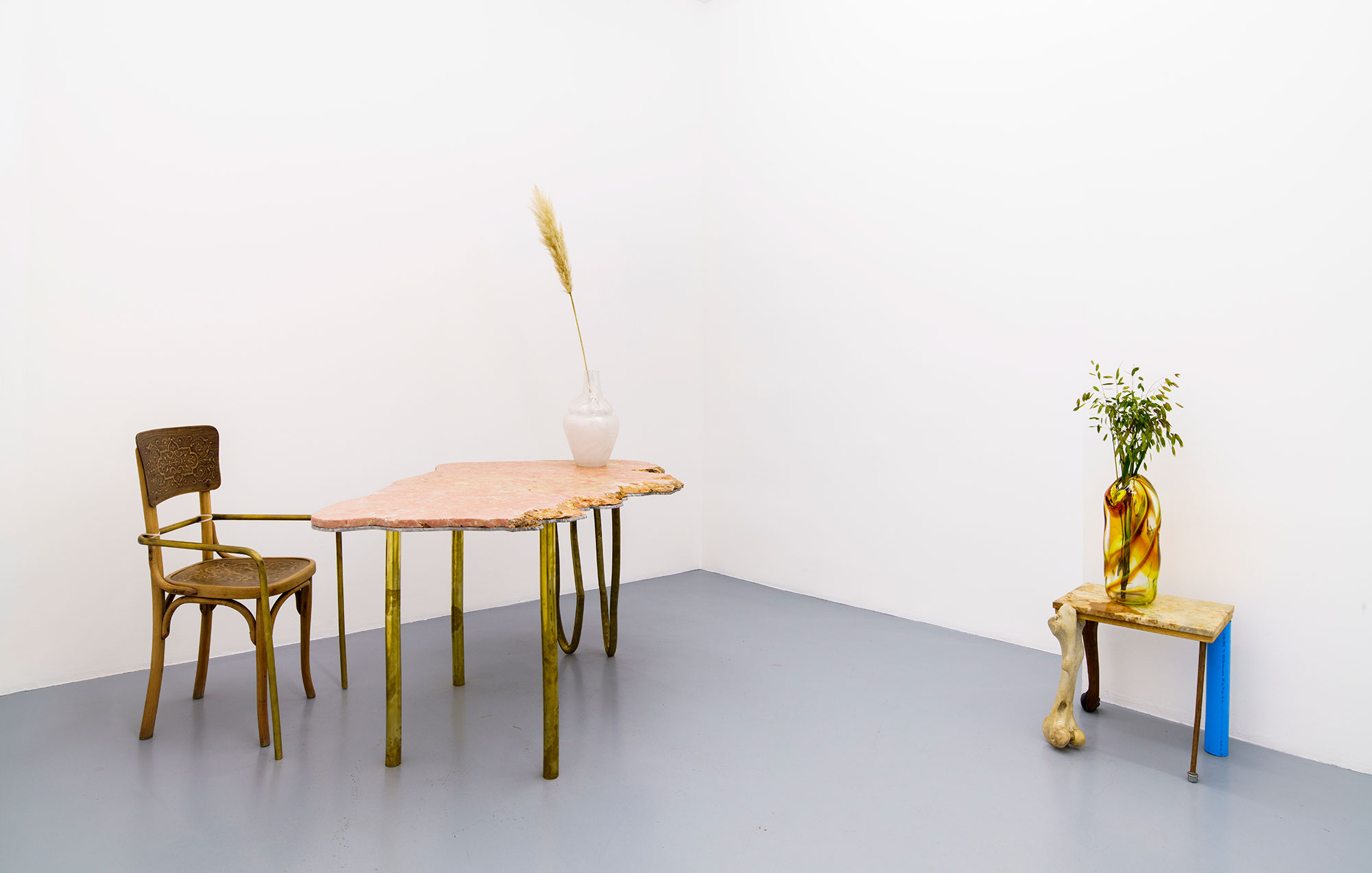 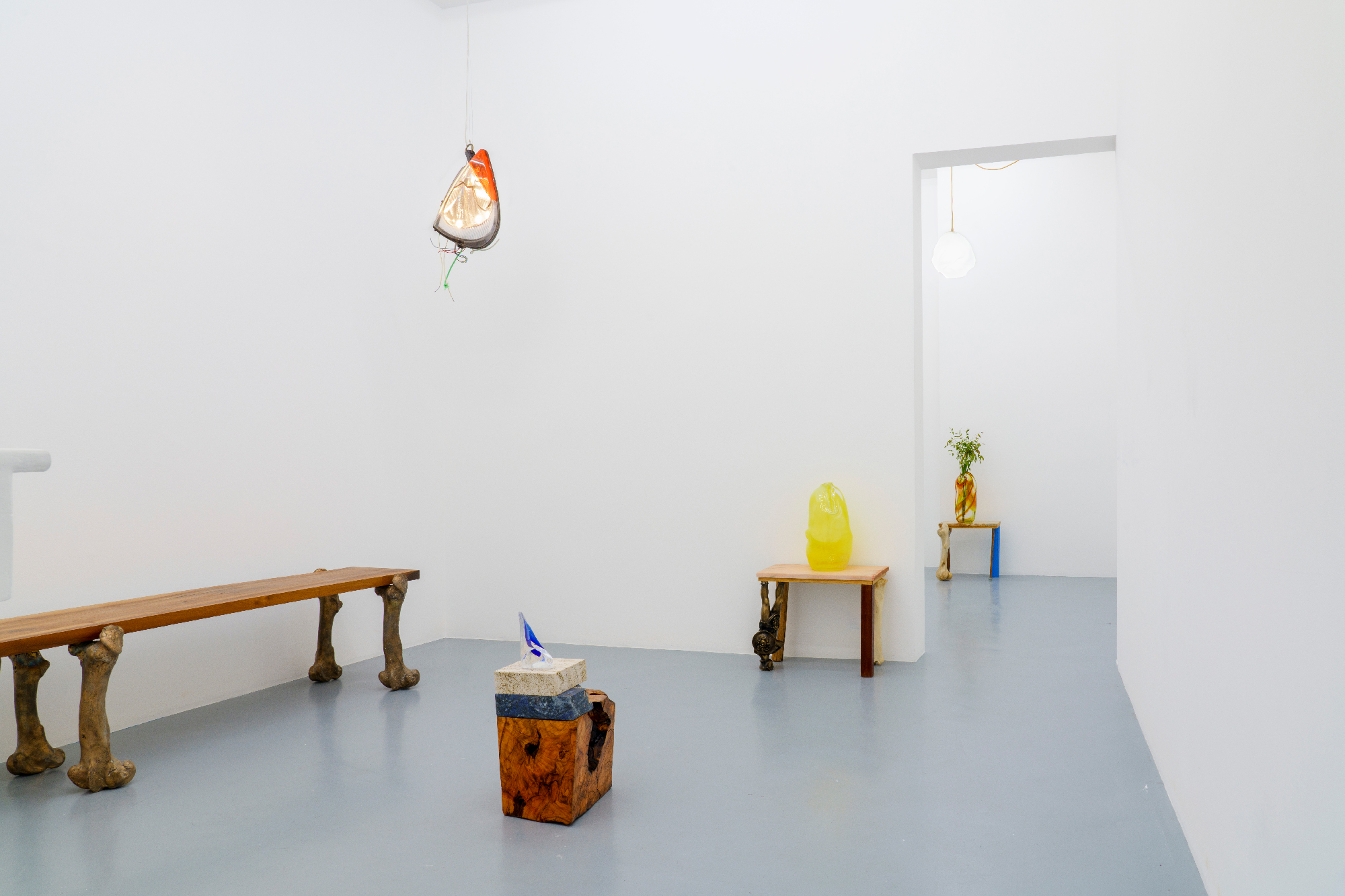 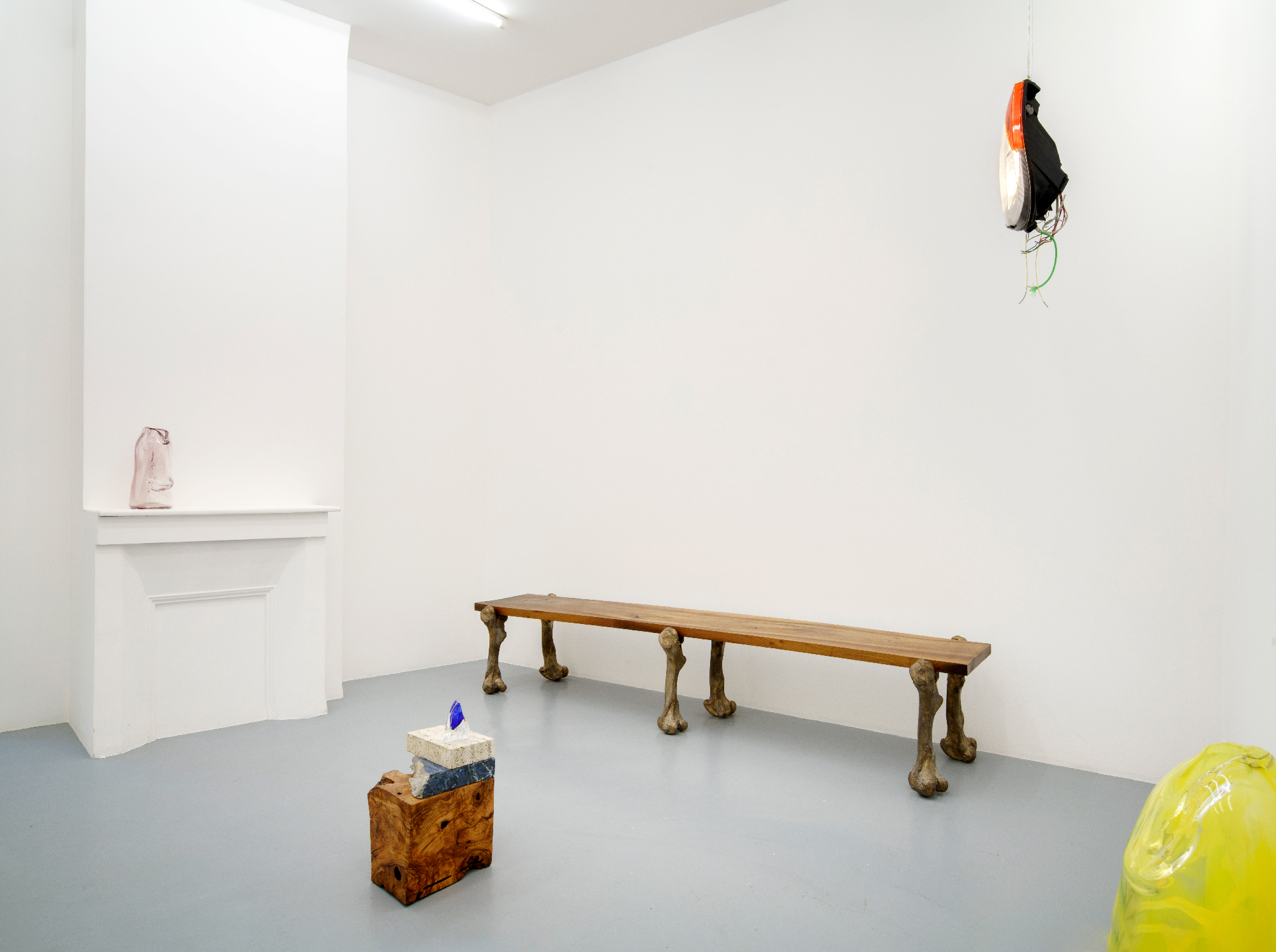 Michel Rein Gallery is pleased to present works by Maria Thereza Alves and Jimmie Durham for Labinac, a design collective they started in 2018.

All of these works evolve around the interaction between different materials, old and new, re-used and/or created ad «hoc». The creation is invoked not only in the moment of its production, but also in its second, third, fourth phase of life, when the new owner who will acquire it will bring a new life to it by inserting it into their space using it as a chair, table, light...

Works made for Labinac were exhibited in Milan, in Venice during the 17th Venice Architecture Biennale, in Berlin.

The exhibition gathers works including a majestic  bench made  from walnut and bronze casts of horse bones, created  by Jimmie  Durham. Maria Thereza Alves chose to work with glass for her series of vases entitled Forms of life. She uses molten glass, an incredibly malleable but also complex material. All of these works are unique and were made through a process of experimentation between the artist and glassblowers.

For us, it was obvious to exhibit these works. First of all we have a long common history with Maria Thereza Alves and Jimmie Durham and we have been representing them for almost two decades. As a result, they are both at the heart of the gallery. It is also important to us that Labinac is a collective design process where other artists participate or will participate in the future to enrich the label. Objects created for the Labinac label are poetic and reflects all sustainable concerns. They make the choice to re-purpose materials or to work with craftsmen such as glassblowers and bronze casters.
The common denominator for the whole process is solidarity. There is also the purpose of supporting the crafts works of indigenous people in Latin America.

Maria Thereza Alves was born in 1961, in Brazil. She is a multidisciplinary artist, writer, activist and designer. She has participated in Manifesta 12 and 7, the 32nd and 29th São Paulo Biennale, the Sharjah Biennale and in dOCUMENTA (13) among others. She has had solo exhibit at MUAC in Mexico City and a survey exhibit at CAAC in Seville. Alves participated at the Toronto Biennale in 2019 and the Sydney Biennale in 2020. She is recipient of the Vera List Prize for Art and Politics 2016-2018 from The New School in New York. Her book, “Recipes for Survival” has been published by the University of Texas Press.

Jimmie Durham was born in 1940 in USA and died in 2021 in Berlin. He was an artist, designer, poet and writer. As a young person he worked as a carpenter and construction worker. He came from a family of woodcarvers. Durham began working in alternative theatre and writing poetry in 1963 during the beginning of the civil rights movement in the U.S. Besides countless solo exhibitions, he has taken part in numerous international exhibitions such as dOCUMENTA (1992, 2012, 2022), Whitney Biennial (1993, 2003, 2014), the Venice Biennial (1999, 2001, 2003, 2005, 2013, 2019), the Istanbul Biennial (1997, 2013) and many other shows. Jimmie Durham was awarded the  Golden  Lion  for  Lifetime Achievement at the 58th International Art Exhibition of the Venice Biennale.

Maria Therza Alves and Jimmie Durham have made their own furniture and work areas in each place they lived over a forty-year period.