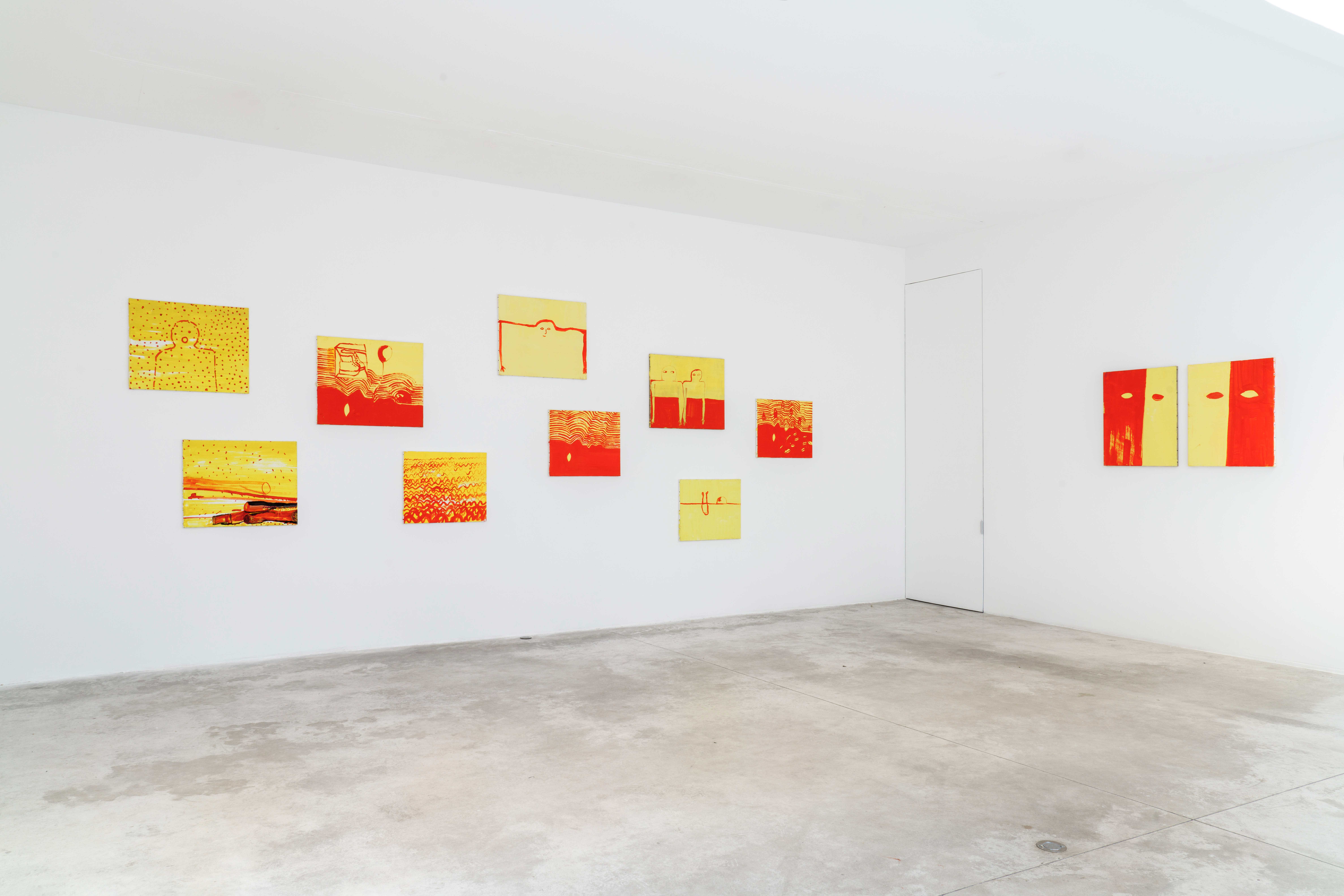 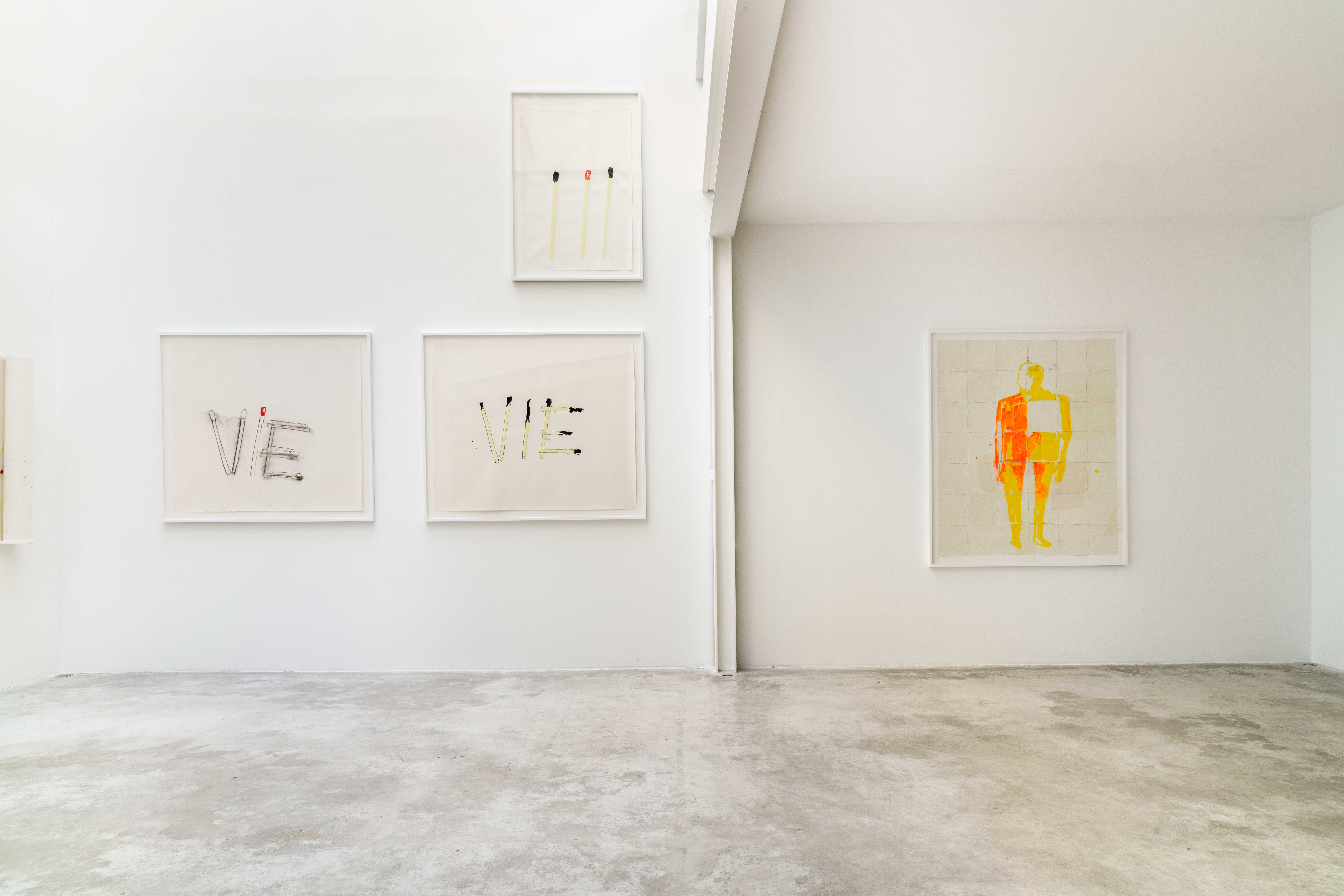 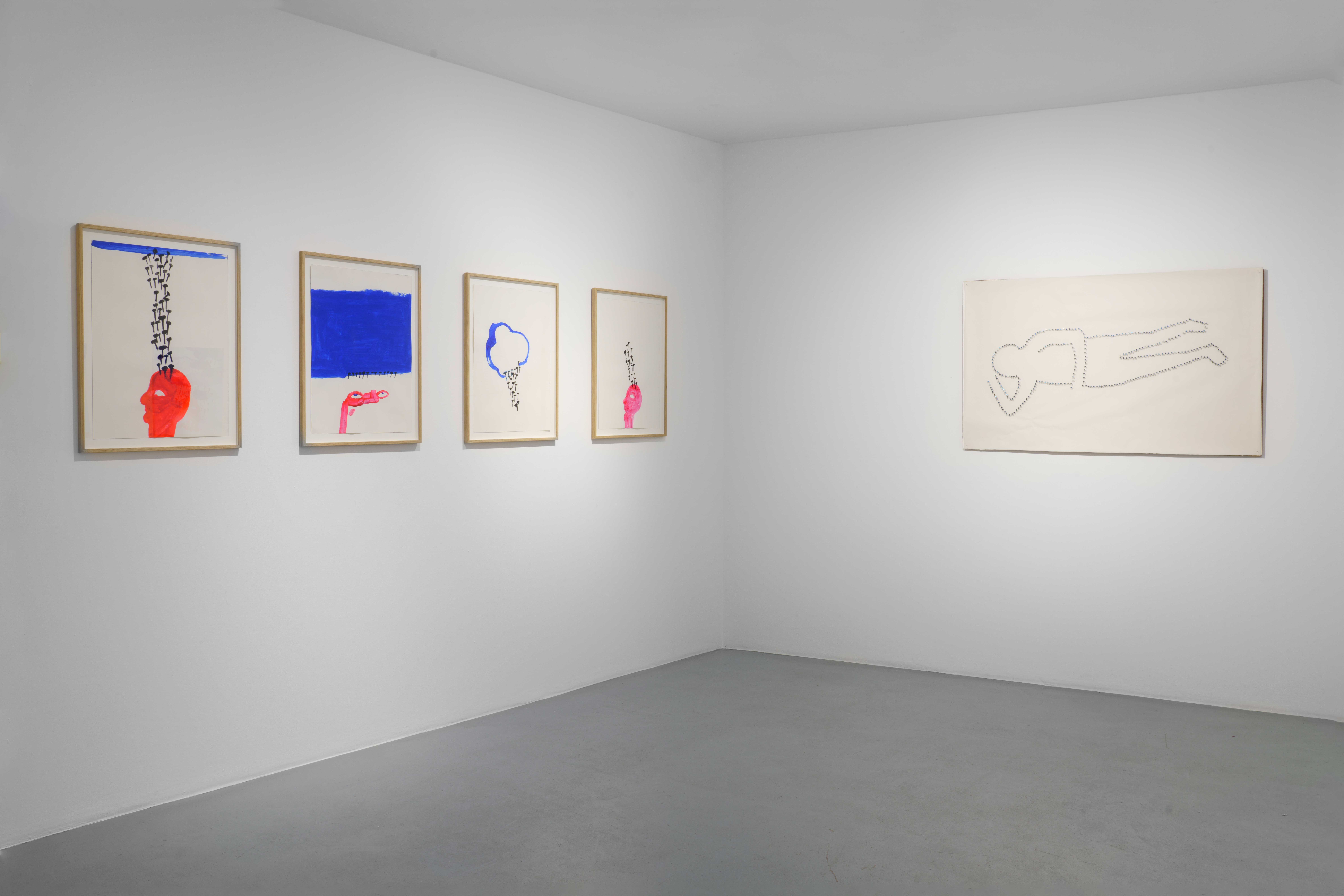 By way of myths and fables, we know that living beings can come into being from a bit of earth or bread, rise forth from a spark, espouse the form of wind, and silently inhabit our small objects.

The layout creates an expanse of colour by opening an eye to it. Rod, dot, line, loop, letter, word, wave... It doesn’t take much for a graphic element to beckon, and become an image. In three of the red paintings on a yellow ground produced in 2021, the outline of a face is also a landscape, variously enlarged or inhabited. The interplay of signs spreads an anxiety in solar expansion and the fullness of the frame. This applies, incidentally, to the whole series.

From her early days, more than 30 years ago, Anne-Marie Schneider has stayed with the “fragile unbreakable” line (the title of her show at the Musée d’Art Moderne de Paris in 2003). Colour arrived in the early 2000s, first of all in splashes and washes in drawings; then in 2008-2009 with paint and canvas, and an initial fierce and magical cycle, inspired by Beauty and the Beast. Between 2000 and 2007, Anne-Marie Schneider made four super-8 films, alternating animated sequences with off-the-cuff live shots. The editing operation applied to eclectic material enabled her to broaden the work involving analogy and “fantasy” (in the strongest sense of the word). Although there is nothing systematic about her work, she goes about in a spirit of great rigour, in the smallest decisions to do with the layout and the way the coloured shapes are cut out. It is with the wherewithal of poetry that the artist explores and conveys “the opposing demands of life and death in a prosaic world” (Joseph Conrad).

One and the same constructive simplicity based on elementary units hallmarks the sets and figures on view here, all made in 2021. A large frieze shows a host or line of matchstick figures, some with black heads, others red-headed; several are waving their arms. The water that the paper has absorbed along the layout lends volume to the stick-bodies. In the large triptych, VIE (LIFE) is also written with matches. The interplay is allegorical. Back in 1997, in one of the drawings in the set exhibited at Documenta X, a lit match formed the I of “Information”.

The match is a small object with a large symbolic scope. Anne-Marie Schneider is not the first artist to show an interest in it: suffice it to think of Magritte’s Personal Values (1952) and Raymond Hains’s Seita match-books (1964). Interplays of scale upset the order of forms. In a eulogy of “small things” as opposed to the superficial excess of pathos, the Austrian author Adalbert Stifter wrote: “The force with causes the milk in a poor woman’s pot to rise and overflow is the same as the force that causes a mountain to spit fire and have lava flowing down its sides” (preface to Cristal de Roche, 1852).