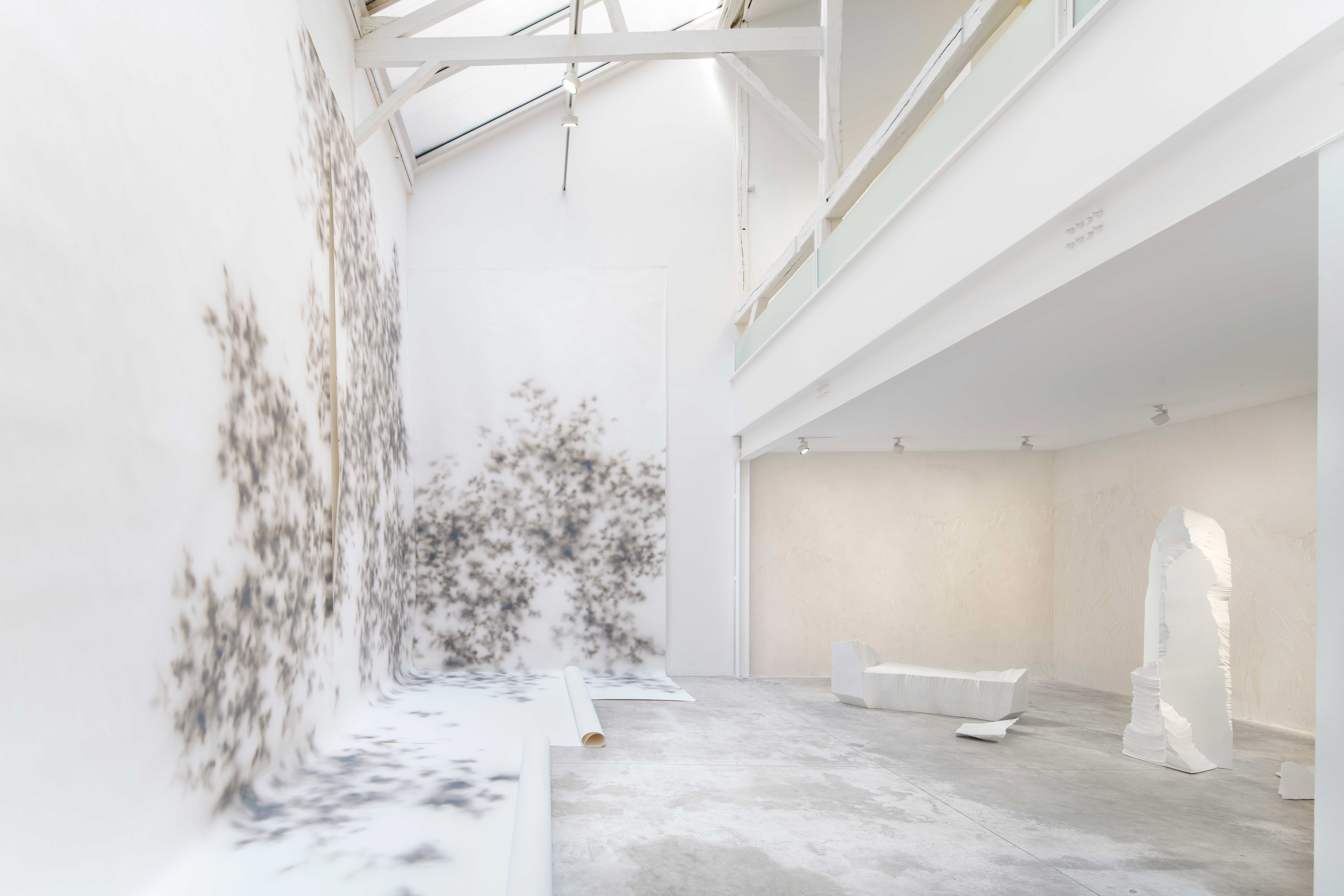 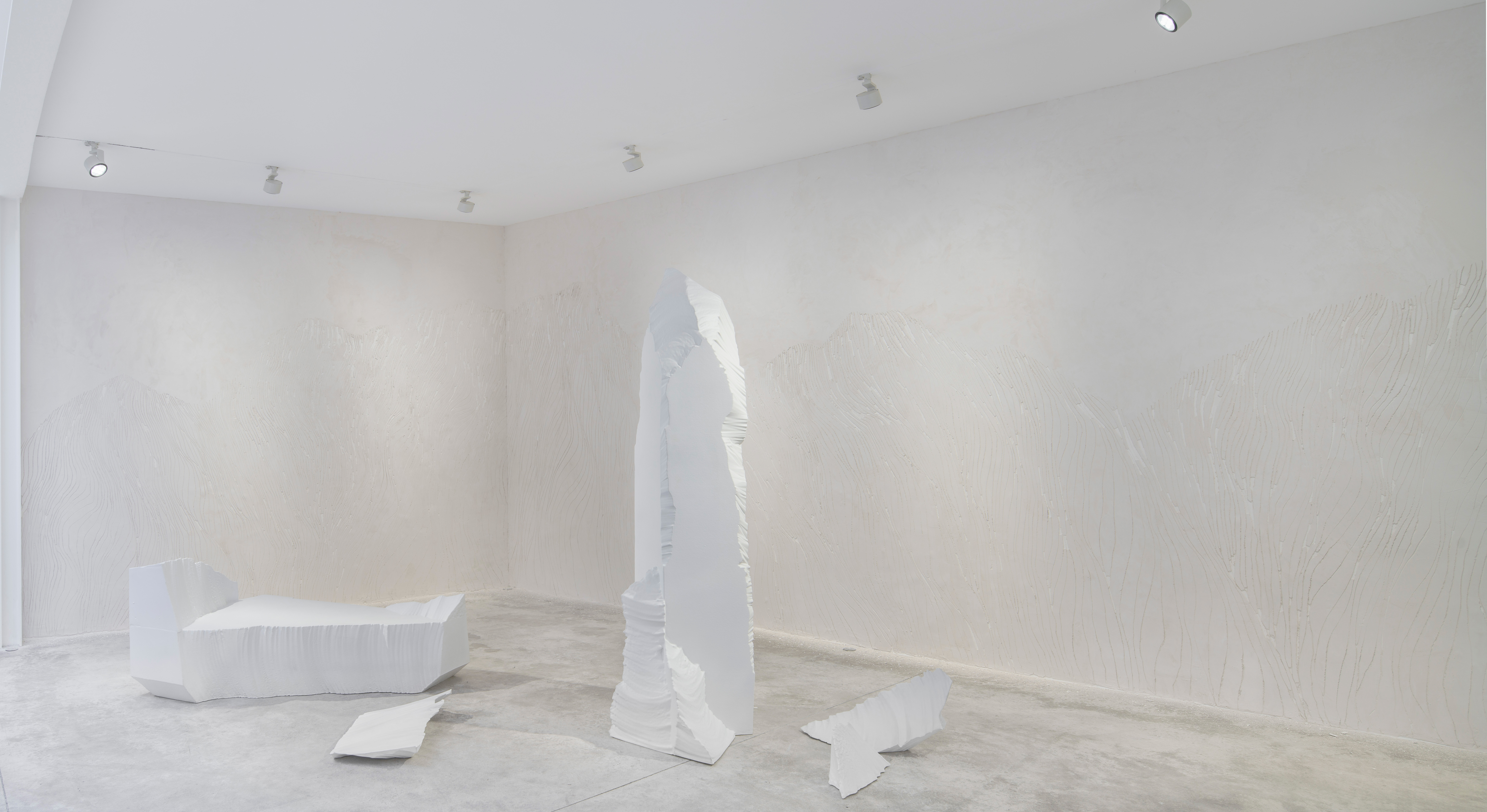 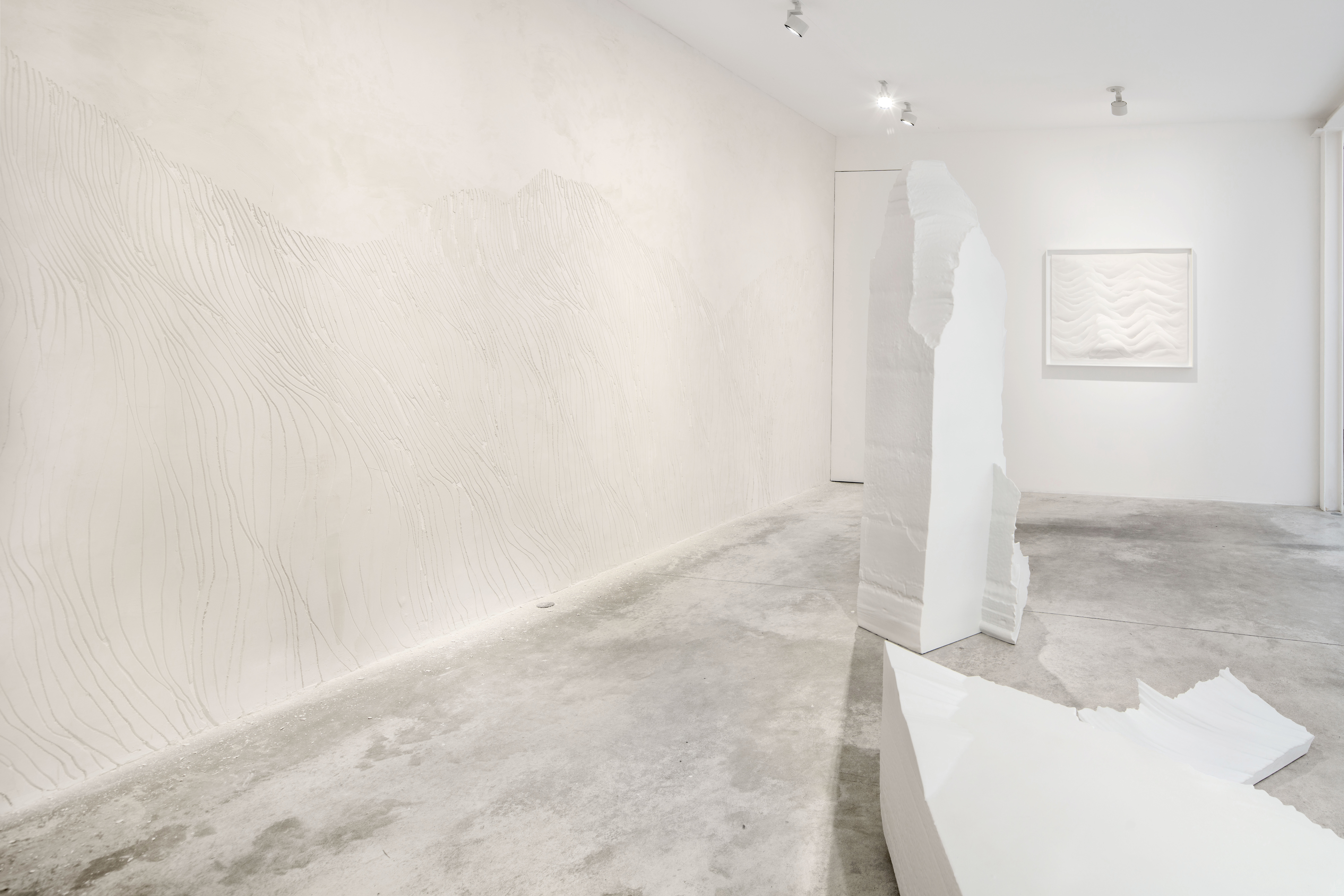 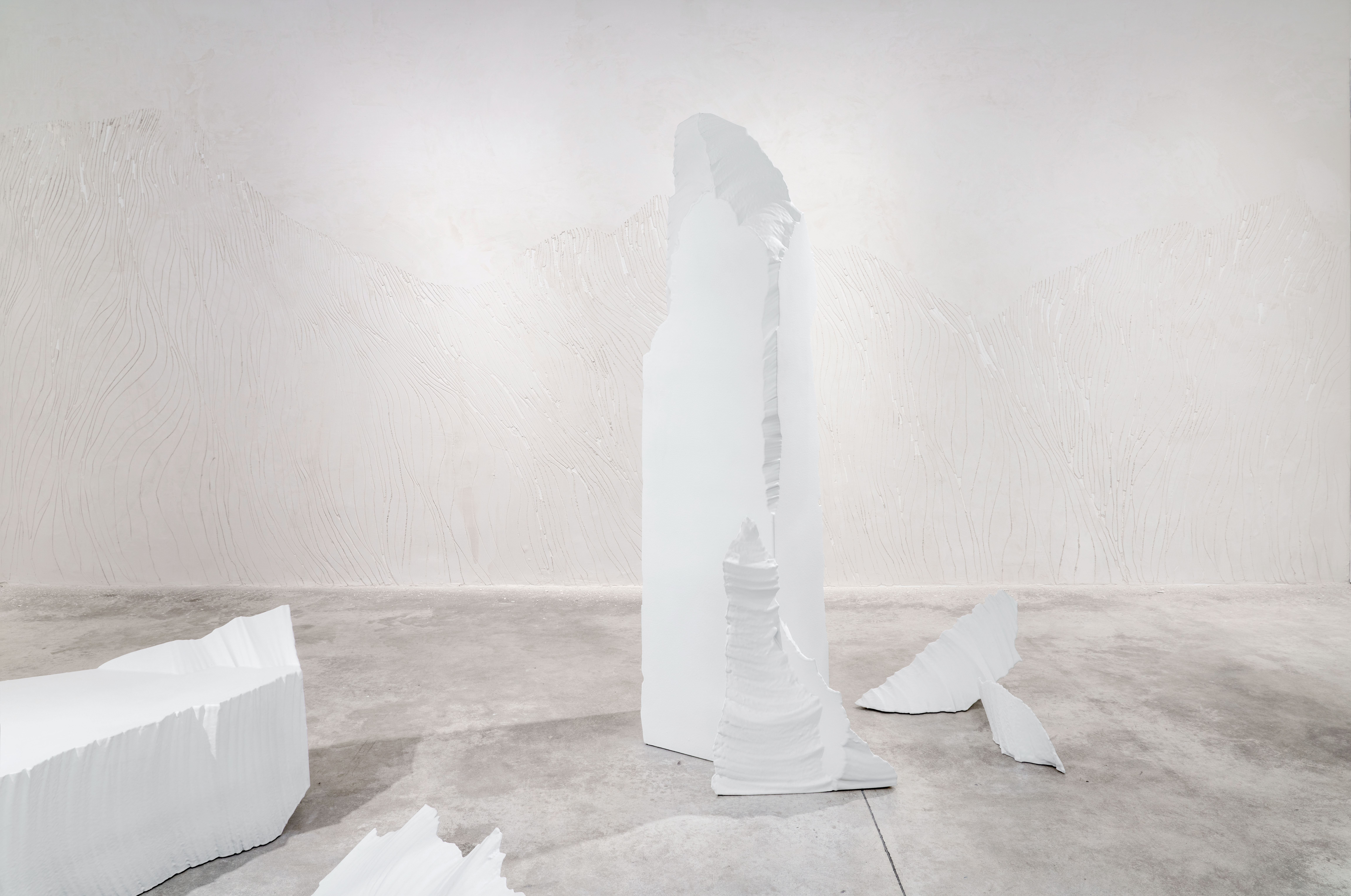 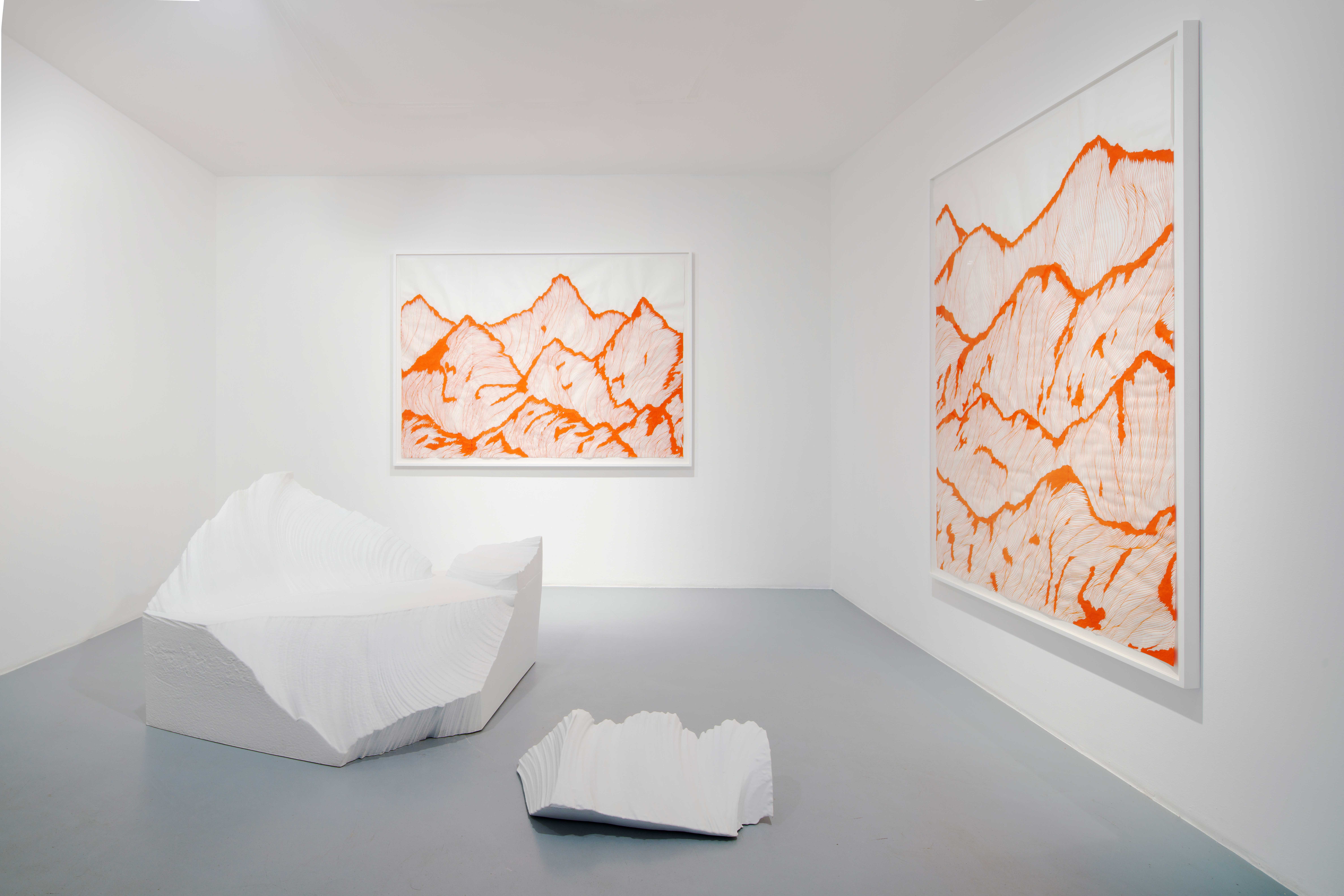 It is easy to lose oneself in the drawings of Sophie Whettnall. Immersive in scale and influenced by the chiaroscuro dynamics of landscape painting, Whettnall’s work has a hypnotic effect.

But it is the artist’s performative approach to drawing and installation; the inimitable spatial and corporal reflexes of her physical process, that ultimately results in an immediate connection for the viewer.

Whettnall’s visually striking pieces are produced through physically demanding iterative processes. She creates work in series for which she employs repeated procedures or protocols that often engage common materials in counter-intuitive and sometimes violent ways; building up shifting patterns from primal hand-made gestures. The exhibition Monuments intérieurs presents work from four distinct drawing series, with four different generative techniques that are nonetheless unified by a transfixing tension between intimate and infinite dimensions.

This subtle yet radical tension is immediately evident for example in Whettnall’s ongoing series titled Red Landscape; in which images are built up from hand-drawn red ink lines in parallel formations to create undulating landscape contours reminiscent of topographic maps. Vibrant energies are created by the push and pull effect of her characteristically laborious line made with a bamboo stick that both establishes a personal sensibility and accumulates to create the impression of vast spatial expansion. Whettnall’s drawing protocols further generate subtly changing configurations whose space and time-bending qualities are essentially endless. This boundless dynamism is only emphasized by their appearance in formats that seem to reveal only part of a larger pattern/processes within their fixed size or frame.

In fact, the primacy of Whettnall’s time-binding, meditative process of ‘drawing’ is revealed by the variety of formats she uses in her work, from ink on paper arrays and scratched plaster walls to larger public plazas; as if it is a spiritual force itself that takes on various manifestations. In the site-specific Plaster Drawing (2021), Whettnall etches parallel lines in fresh plaster directly on the gallery wall, a kind of reverse bas-relief in which the ground is figured. Here again we find the topographic iteration, where one freehand line generates the next to form landscape like shapes; organic three-dimensional bodies generated by unpredictable gestures.

There is a violence inherent in the Plaster Drawing process that is integral to its ragged organic beauty. In fact, Whettnall’s work is often characterized by the opposition between antagonistic forces but it could be seen more as a transformative activation of multiple tensions, like a lens that can see more detailed or expanded areas of our continuous reality. While working she combines both strict control and a surrender to chaos, confronting us with these distant yet nonetheless intersecting realities and reminds us that we already reconcile them every day. This paradoxical range of physicality appears in a further series of ‘drawings’ created merely with torn paper sections. The topographic layer motif is apparent here too but there is also a fine gradient of light and shadow between each cut as the light falls on the slightly three-dimensional paper strips, building a vastness with elegant three-dimensional clues.

Whettnall is in fact well-known for her subtle pieces that allude to the delicate shadows of foliage. Seemingly displaced from deep in the forest yet detached from existing referents, these shadow works nevertheless seem uncannily ‘real’, functioning like signs that trigger deep-set archaic memory. Often painted directly on existing surfaces, their strange familiarity could further stand in for memory or the mystery of cognition itself. Black Dust (2021) is a site-specific iteration of this process that responds to the situation of light in the gallery space. Each leaf is created in a gray tone specially mixed from ink and pigment and it is their ‘organic’ accretion that allows this technique to form realistic configurations.

Labour, light and landscape all come together in Whettnall’s work. Influenced by the way light is portrayed throughout the history of painting and especially in the landscape genre, Whettnall’s work re-contextualizes this sensibility in today’s performative terms. Landscape has always unlocked both spiritual and profane dimensions, and it is associated with both the immaterial and the material worlds. But its ‘abstract’ nature means that ‘landscape’ can be both mimetic or completely imaginary and still maintain non-figurative properties. It is this non-human, yet limbo-living world that Whettnall arrives at through her driven, intuitive techniques.

Whettnall’s practice is defined by her use of ritual techniques that can access unconscious intentions and thus allow the resulting work to appear in ‘natural’ and polyvalent ways. Ideally this concentration on the means over the ends extends to the viewer: shifting perception itself and thus what is perceived thereafter. Vast landscapes, hidden interiorities, shaky crawling shadows of leaves and plays of light: in Whetnall’s work, the oft-obscured netherworlds of everyday living are called to attention.

From May 21 to July 4, 2021 Sophie Whettnall has a major solo exhibition at the Chiostri di San Pietro, Reggio Emilia (Italy), cur. Carine Fol, in collaboration with CENTRALE for contemporary art, Brussels.