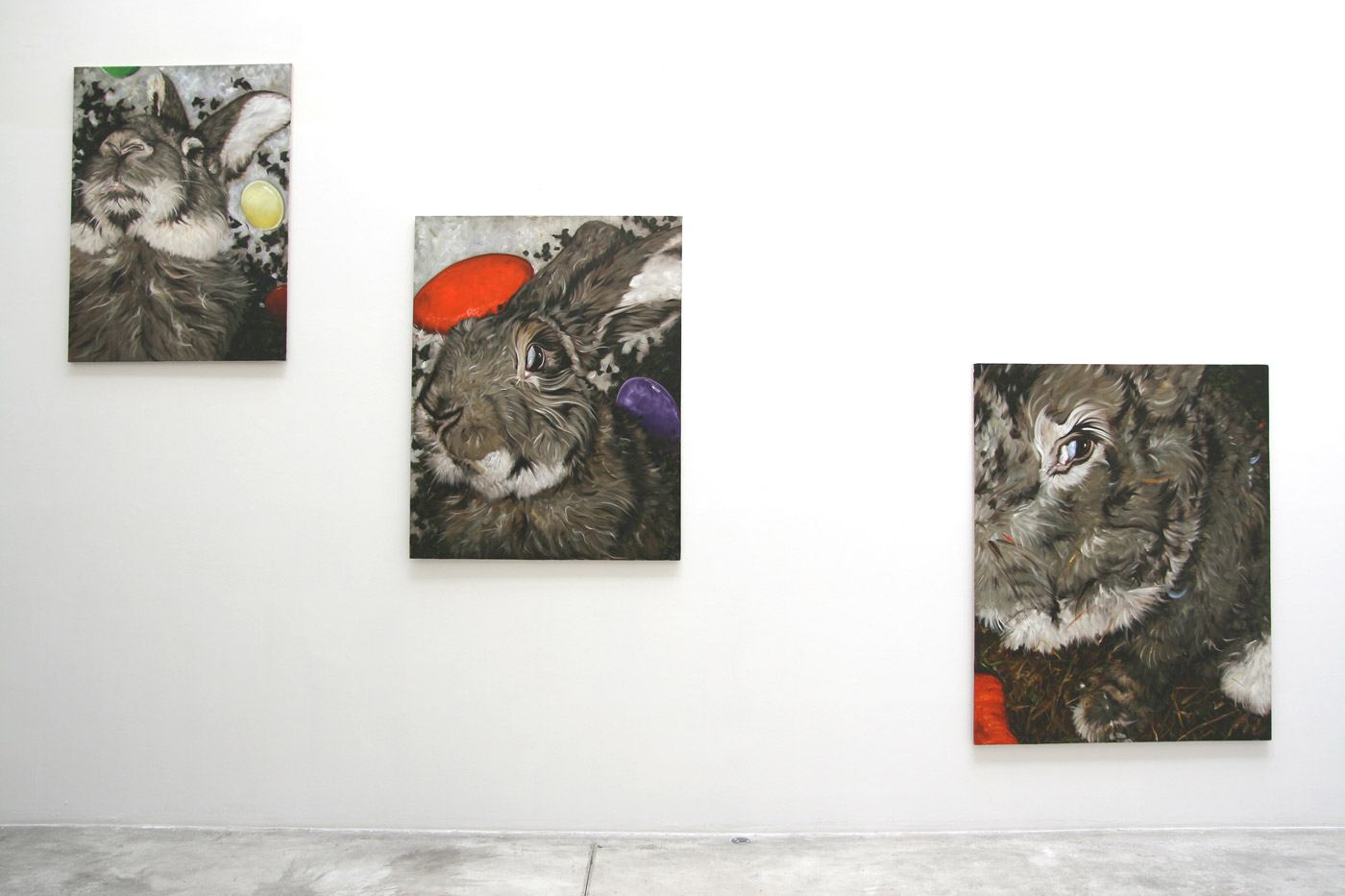 For his second solo exhibition at the galerie Michel Rein, Armand Jalut is showing a set of recent paintings and drawings.
The works brought together for the show may offer some surprises, and all to the good if they do, because the artist who has produced them is not averse to disconcerting viewers. This young painter has a "silly" side, which prompts him to paint rabbits, hens, Smarties and plates of fish 'n' chips; and at times he manages to bring forth a certain singular unusualness from such intentionally monotonous and trivial subjects. Our discovery of the subject triggers an operation that is subtly directed by the artist, and consists in confusing onlookers.

Le Dindon/The Turkey (2008) is typical of a situation that Armand Jalut is forever re-creating: while we see a turkey's rump close up, we are very swiftly confronted with a disturbance of the form by the treatment thereof. The figure loses its solidity and drags us through a pure pictorial chaos. The illusion of depth fizzles. The distinctive features amid the creature's silken feathers, forming a colourful froth, and the surrounding vegetation become blurred, and merge. The picture's undeniable beauty is offset by a slight dull noise which contaminates the atmosphere and makes our eyes wince. This is tantamount to wondering if it is the subject which is disturbing the virtuosity of the execution, or if it is not rather this markedly distinctive technique that hampers our enjoyment of the comic and grotesque character of a turkey's arse, also known as a parson's nose.
Armand Jalut's chickens show the same symptoms. Their ill-defined outlines liken them to clouds whose shapes -sometimes conjure up animals. La Poule n°2/Chicken n°2 (2008) calls to mind, turn by turn, a headdress of ostrich plumes, a fire work, and a landscape littered with sparks, flames, and smoke.
Armand Jalut introduces disorder into the inane and sickly sweet atmosphere of a post card depicting a kitten, reproduced in a large format (Le Chaton/The Kitten, 2008). The kitten's fur is much more stretched than in the original model, the hues are duller, and the little animal ends up looking like some stuffed toy that is a bit grubby and more than a tad monstrous-a Gremlin-cum-kitten, if you will. Armand Jalut regularly shows his pictures in the form of polyptychs. Canapé, Bûche glacée/ Sofa, Yule Log (2008) brings together five paintings that are, a priori, very different. The organization of these images tends to bring to the fore a whole set of secret and mysterious links, liaisons and analogies. Armand Jalut thus shares with the characters in Witold Gombrowicz's novels the childish pleasure and excessive concentration that are applied to interpret the least sign, and grasp the distance separating two objects. An isolated cabin in the woods, a feather boa that glides about a young woman's neck, an open mouth full of food, a sofa's ripped arm rest, and Picard Yule logs which restlessly quiver. All this has the look of a feast noiselessly consumed, and celebration that is meaningless and unshared.
There is a quivering akin to that of the Yule logs in the charcoal drawings of pastries. The quivering cannelés give the impression of being contaminated by a strange virus, and on the point of breaking up and becoming substanceless.
With Armand Jalut, a plate of fish'n'chips takes on the appearance of some fantastic landscape. His fingers, which he often paints as they rummage through food, look like the enormous threatening worms in David Lynch's movie, Dune. Weird hallucinations, reality distorted, secret intimacy with the shapeless, and personal mythology, this is where forms come from in Jalut's work, from degradation.