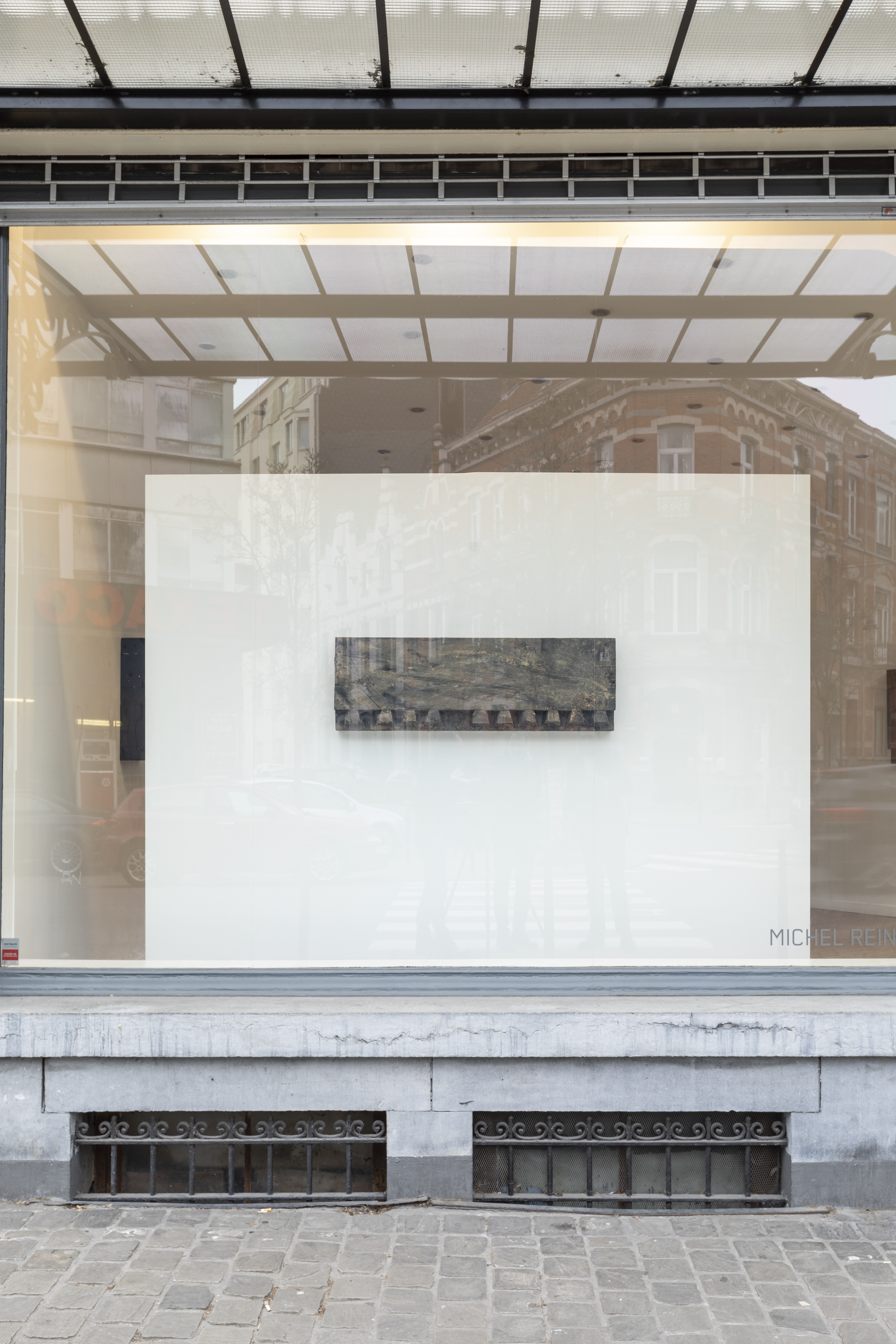 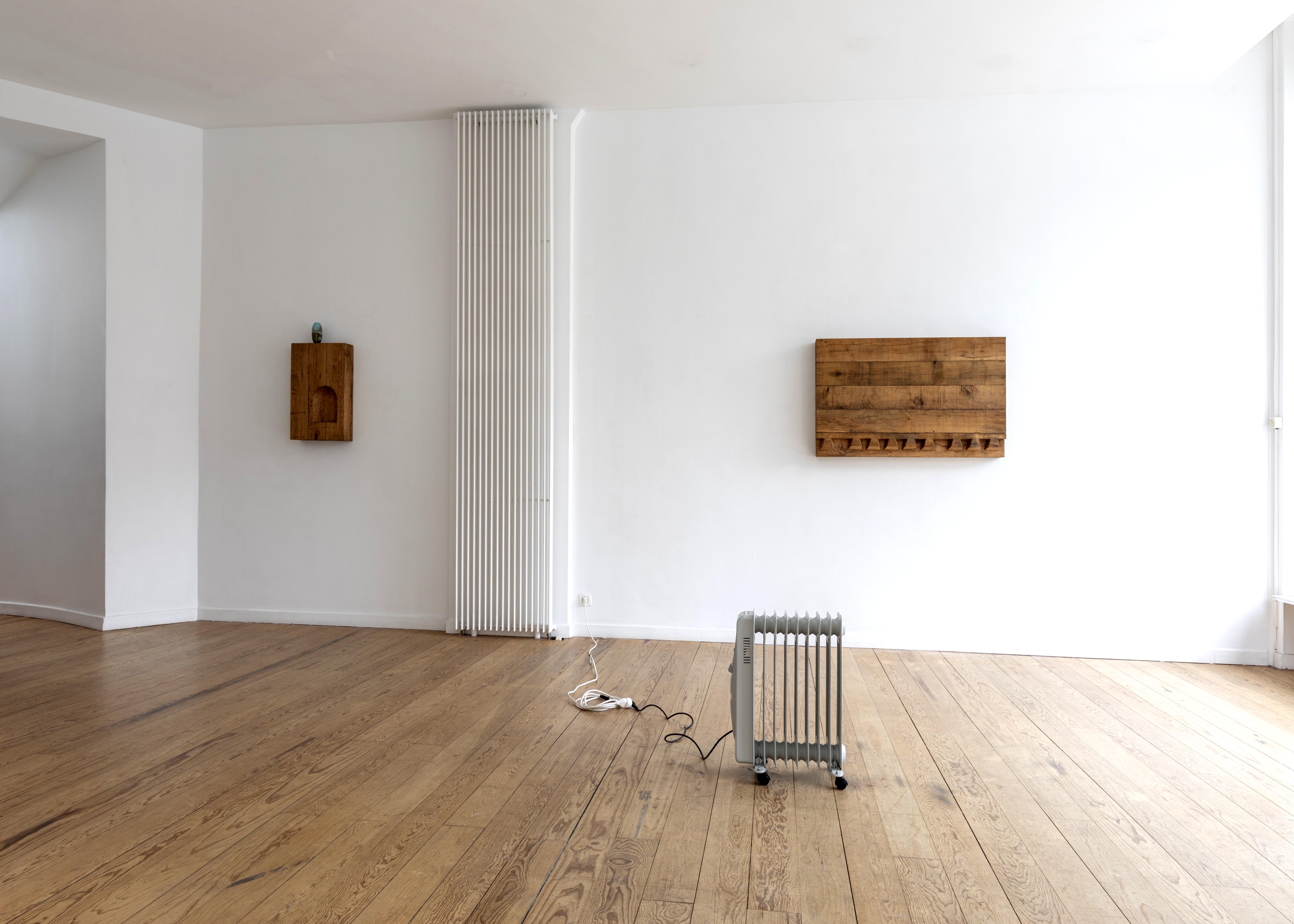 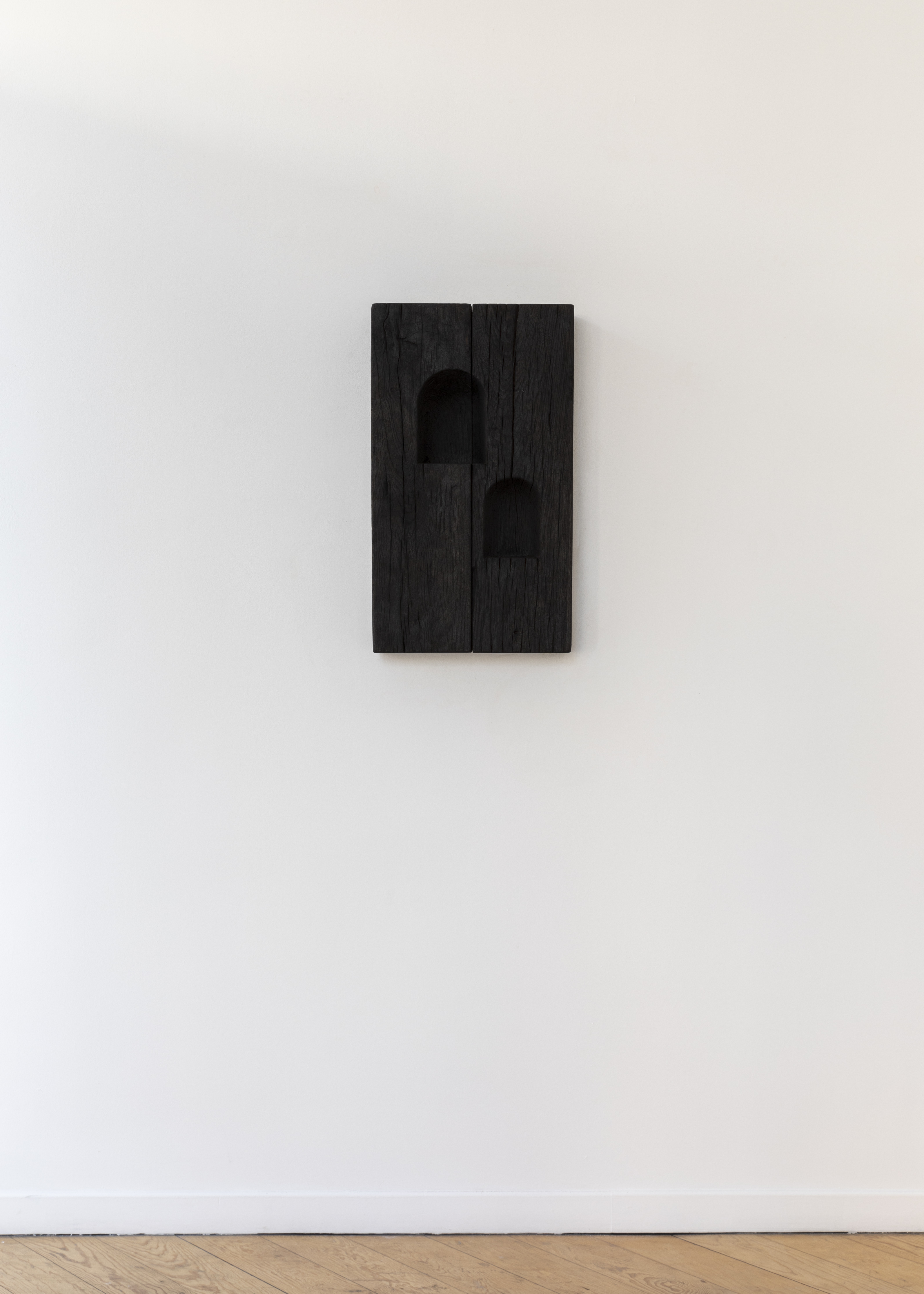 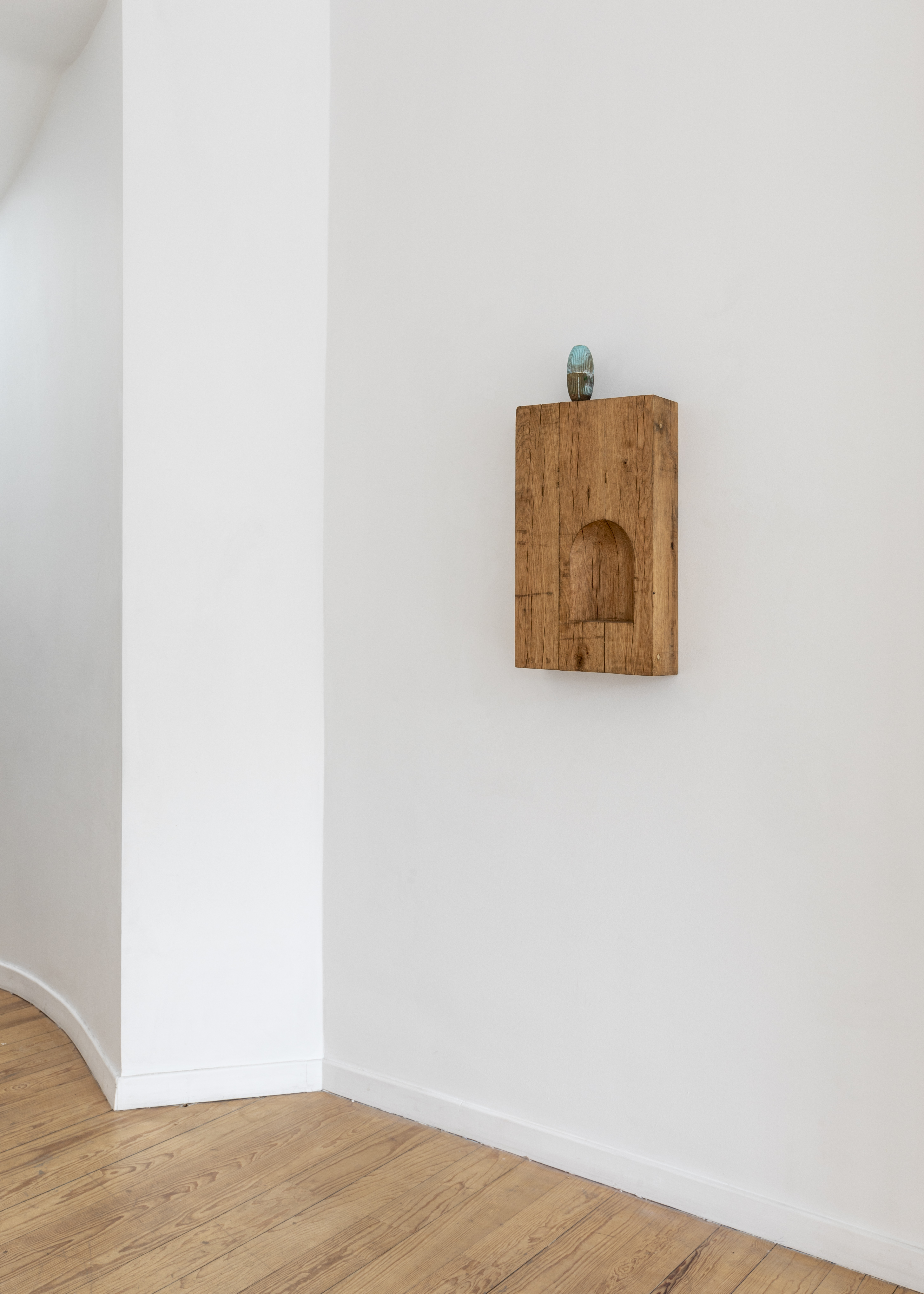 Excerpt of “The Shrewdness of the Missing Part”

The “new works” exhibition comes out of the ground. It displays pieces carved in the oak, dipped in olive oil, and some tossed in the fire, scattered around the room among photographs of dusty shades. Triglyphs, larariums, images are close by, lofty and quiet, from the aniline black, neutral and deep, for some, and the polychromatic wood brown, with streaks of reddish-to-brown, fallow and tan, for the others.

What happens when we face a work of Sarin? First of all, it is an object which we can see. Araw matter, a rough texture, a cracked surface, crafted by the concerns of the sculptor. Since Sarin is a sculptor; he builds bulk shapes, embossed by direct carving, moulding and assembling. Thus a call of the matter snatches us.

Yet this call is accompanied by an aspiration towards that which we can’t see. The works of Sarin conceal another mutineer and traumatic place. They mould that which they shy away from the specta- tor’s sight: their missing part. This shrewdness of the missing part, far from annihilating the sibylline beauty of the pieces themselves, innervates the art of Sarin. A missing part which, as the endocardium enshrines the most intimate layer of any human heart, engulfs the millenary fascination of the being. Here, this missing part swivels around the axis of a catastrophe. Each work embodies and suggests at the same time the instant before. Thereby, each work exhibited here fixes a state of changeover.

And also, in Sarin, there is the light. This light is primarily that which sheds lights and whips the retina of the spectators. Absorbed by the aniline black of some Variations on he of the triglyph, and Va- riations on he of the lararium, it doesn’t only spout of the contrast with the immediate environment, but arises from the pieces themselves. A strong antagonism between clearness and obscurity which, as in Caravaggio, doesn’t have a core, cannot be explained, erupts, always necessary in the experience of the matter. But the most decisive in Sarin is the light which isn’t here. It’s the light of mystery, shadiness, concealedness; a latent light which always defined Sarin’s works. Baudelaire venerated the sample of chaos in a plate of Goya, where light and darkness played along. Here lies the sampling of the instant before chaos.

In the way of an architect, the artist always designs his exhibitions as a place of living. This space spreads the intuition of a human phenomenon. A human phenomenon which examines silently the survival of the species whilst enhancing its decay. The place of the exhibition is but the stage of the ear- th, yet a stage with no show. The individual feels the call of a millenary home disseminating throughout him, the home of Man. For instance, all the omnipotence of Earth browses the density of Work n°6. The beholder, affected by this telluric gravity, seizes the weight of the massif triglyph. One suspects the miracle in this suspension, which says the suspense of the instant before. The stop, the silence, the ten- sion, all the nature of man is packed in such a prodigy. “Earth, prolific in fruits, fertile in conquerors, hail! I sing an art useful to your greatness”, proclaimed Virgil in his Georgics.

Accordingly, the Variations on he of the lararium but relay the ground in vernacular move. Their reassuring nooks withhold the natural silence of an experience of thought. These excavations call the resolution of an unspeakable problem of obviousness. As Hitchcock suggested the drama by the adding of mute images, so many tracks toward access, Sarin establishes the instant before, that which the calm earth prepares since the origin and that the artist but delivers without ceremony. Here lies the silence before apocalypse, the silence of a century.

In his “new norks”, Sarin provides an intimate and millenary work, which guides us through over- lap and experience toward the conscience of the instant before. By his step in the exhibition space, the visitor draws its extent. Above all, the missing parts of his works yell their symphonic presence in this era of fundamental disorientation. The shrewdness of the artist endows the disincarnated world with a resolution, which settles for reflecting the survival of Man. The works of Sarin, in short, are a two thou- sand years old. New, he introduces them to us today.