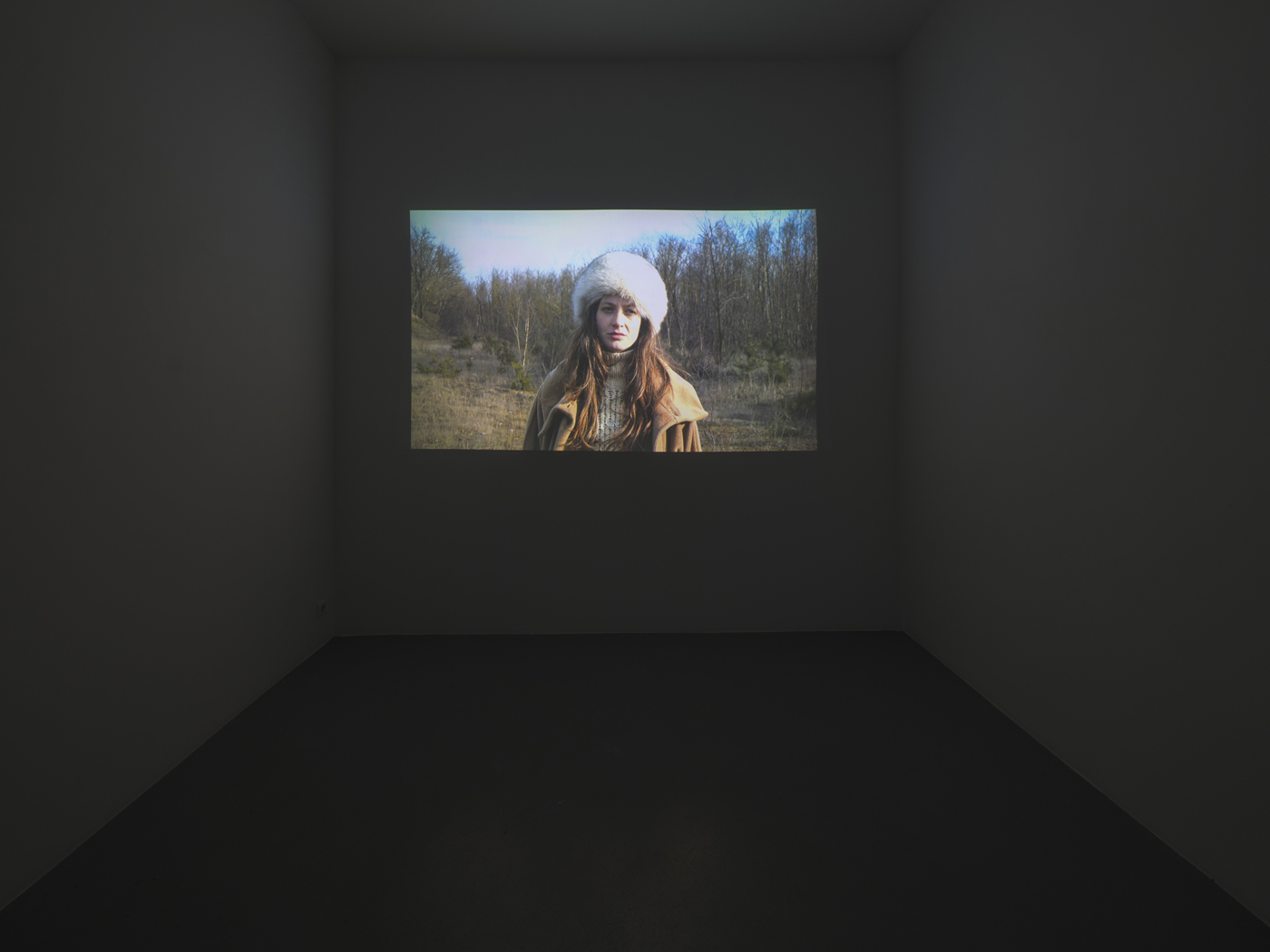 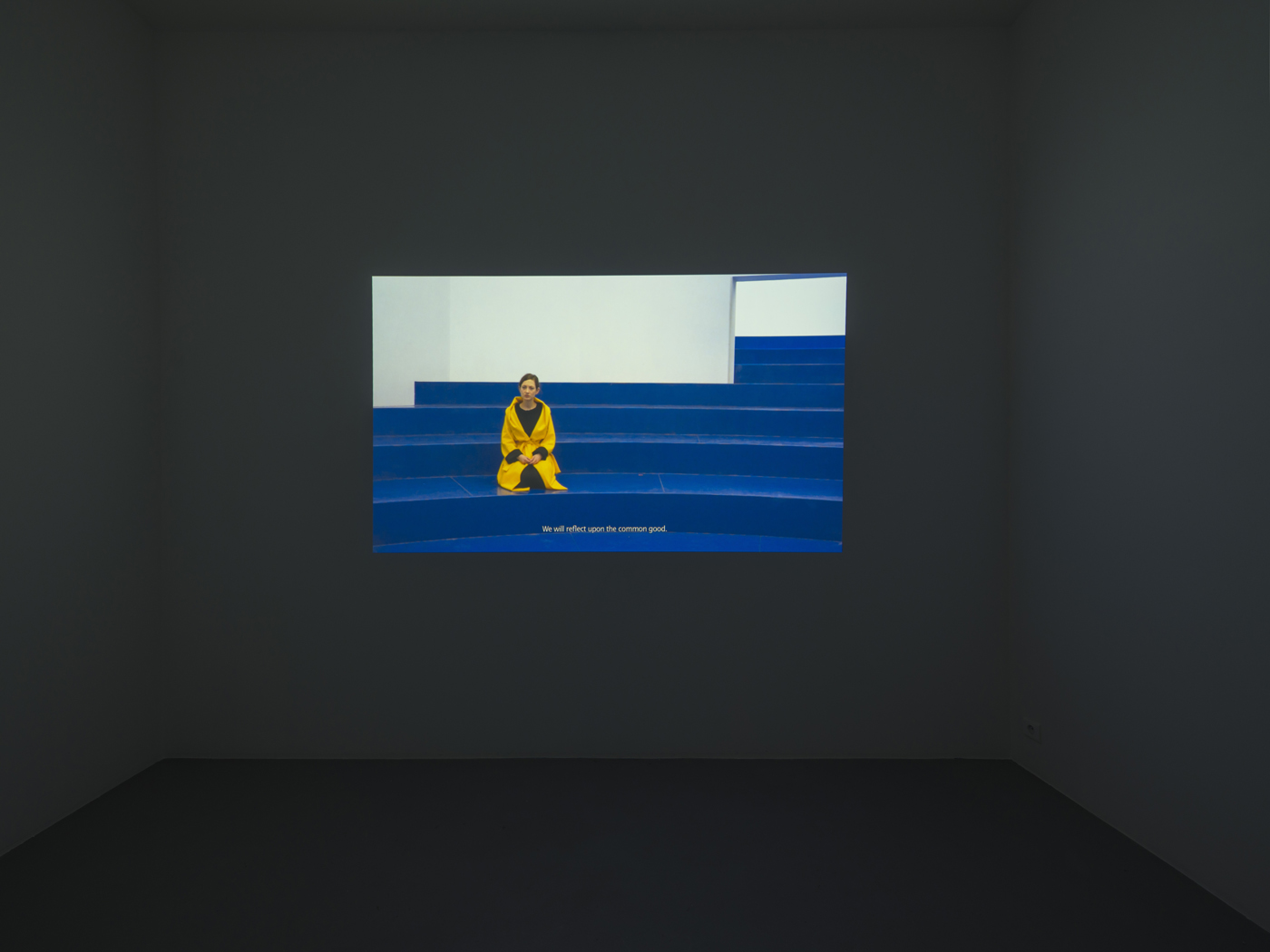 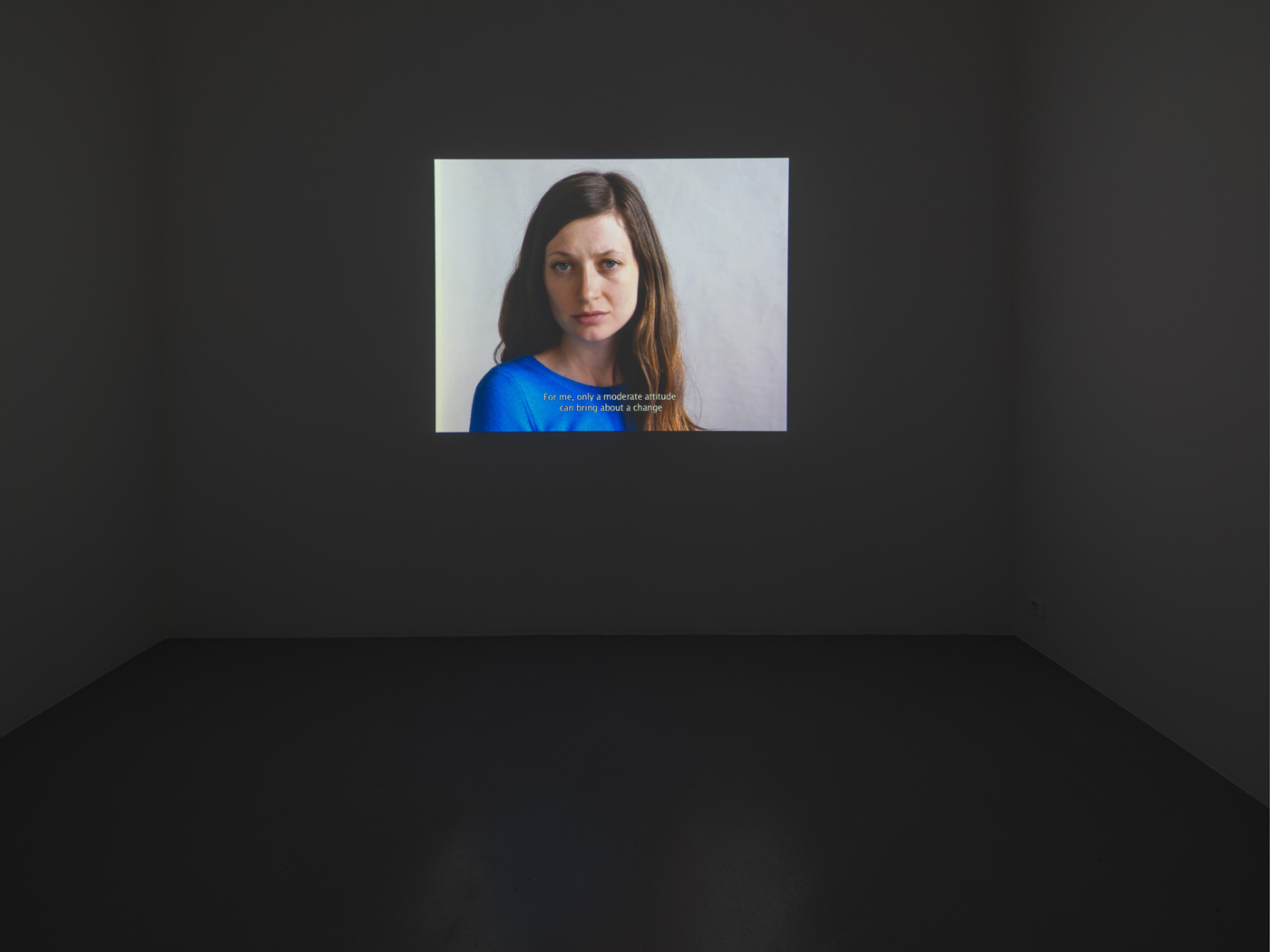 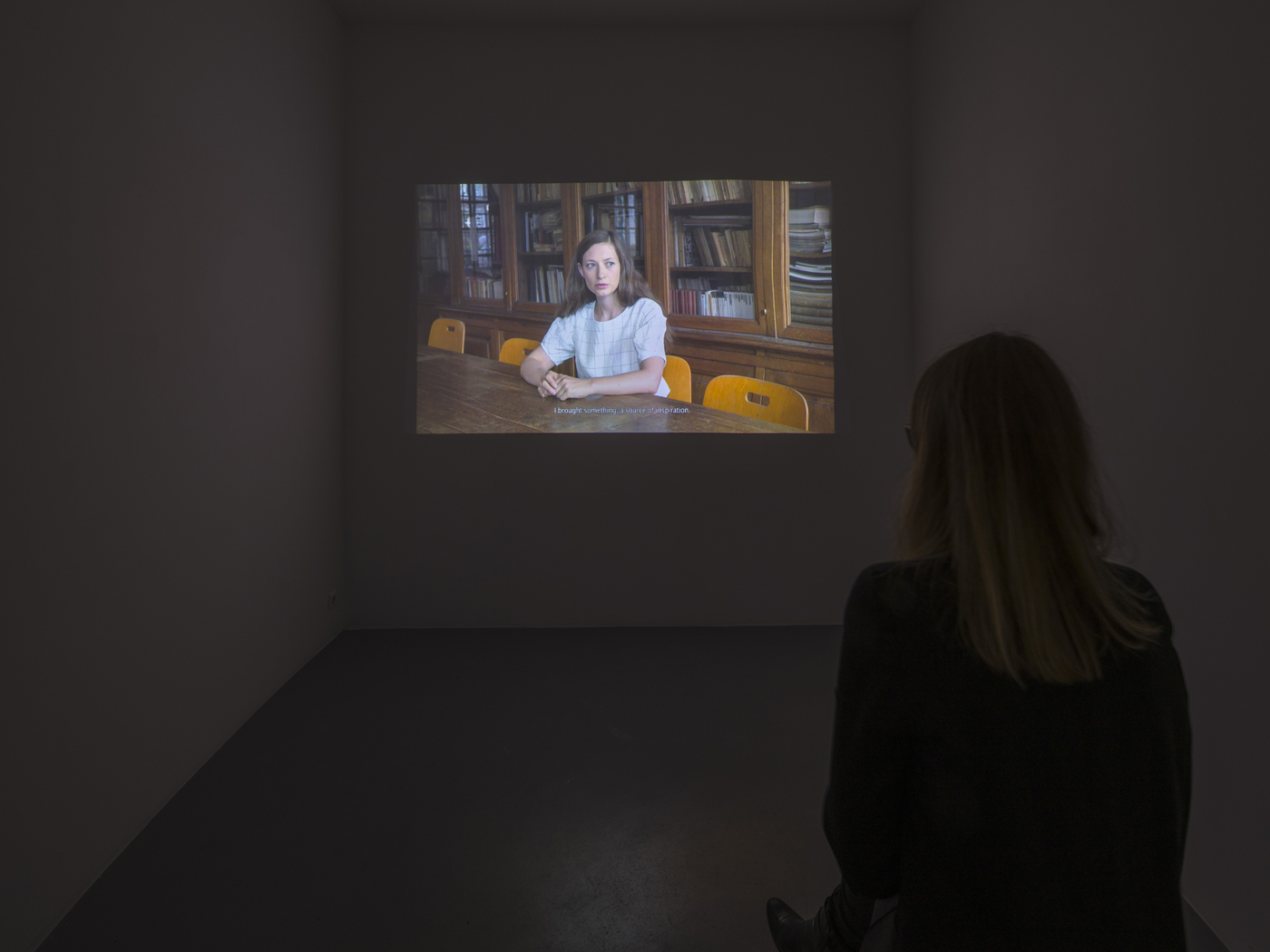 Through her video-performances, Ariane Loze undertakes a methodical deconstruction of cinematic norms, stripping her films down to their most basic, structural inner workings. Her post-minimalist aesthetic brings together conceptual expression and home-made execution in a kind of degree zero of representation that is underpinned by an immediately recognizable narrative made up of static shots of a straightforward action or event: a dinner, a meeting, a chase, or a wander, for example.

Regrouped together as the MÔWN project (Movies on my own), Loze produces her videos in a wholly autonomous fashion: not only does she take on the roles of director, screenwriter, editor, dresser, and sound and lighting technician, but also, with a few rare exceptions, plays all of the characters. In a striking echo of the simplicity of the films’ décors and the immobility of the camera, this economy of production shifts the emphasis towards the interpretation of each character, the incongruity of the situations in which they find themselves, and the derisive criticism that infuses their lines; together, these elements respond to and challenge prejudices, codes, and presumptions. Absurd slices of social life or allegories of inner, psychic experience, these microfictions play out in dystopian worlds that often appear deserted and where the protagonists work through states of crisis, interrogating and confiding in one another, or searching for a way out. In this way, Loze offers an incredulous look at the social, economic, and cultural hegemonies that order the contemporary world, diagnosing the vanity that permeates it to situate her audience at a remove from the action where they can experience a perspective that is at once critical and amused.

«I shot the first of these four videos in April 2017, between the two rounds of the French presidential election, in the weird climate that was then reigning. People didn’t want to go and vote. People said it didn’t serve any purpose. Democracy seemed laughable, the atmosphere was heavy, full of fears for some. I had an idea for a video about the difficulty of dealing with change. I would deal with the personal and family level. The election atmosphere prompted me to broaden the subject. A feeling of dizziness seems to be the symptom of our disoriented age. The past has lost its clout and its ability to shed light on the present. Everyone is trying to protect themselves within an invisible shell, made up of stances and opinions which help people to absorb the violence of the world, minimize the importance of facts, and put the misfortunes of others into some perspective. The ego thus defends itself and is formed  by protecting itself, seeking its place among others. It is in fact the sum of several “I”s which exist together, sometimes confront one another, and mutually obscure each other. These facets of the ego are alternately incarnated by ambient behavioural codes, be they gestural or verbal. They adopt dominant forms of discourse, frequently in contradiction with each other, defining a sort of personal makeshift thing which we call the personality. The video presents these representations of the world, relieved of their will. The four characters explore through words this paradoxical feeling of the asymmetry between action and will, between morality and empathy, between dream and reality. All this in a bare setting. This is a slightly desperate observation which ends with a sentence which offers no exit: “I don’t know what to do”.

In  the Open Studios at the HISK, I showed the first five minutes of this video to the public. Katerina Gregos, the curator of the Riga Biennial, saw it and was very interested. She wanted to show it in May 2018 at Riga. We talked about it, and the idea of also making another video going beyond that observation of powerlessness came up in our talks, too. So in February 2018  I filmed Inner Landscape, in a landscape of wild moors. It’s a video about movement in an open space, which obviously contrasts with the enclosed and austere atmosphere where the anxious exchange about Powerlessness takes place. And in the video the rising movement has a sense. One of the characters introduces the possibility of changes in the offing, and at the same time suggests – as the landscape does - the idea of rising. The conclusion goes way beyond the cramped horizon of present-day human consumption: “The living will escape from domination and predation, the living will never again be subject to desire, will, and the hunger of another living being”.

Shortly thereafter, I found myself in residence at the Fondation Biermans-Lapôtre, a Belgian house at the Cité international universitaire in Paris, In that harmonious setting, I keenly felt that effort agreed to by earlier generations to create places of this sort, and lay the foundations for basic principles meant to guide our conduct. The context of consumption and instant satisfaction in which we are currently living leads us to totally neglect them, even if they are still inscribed on the pediments of town halls and schools. In Etudes et Définitions filmed in the Fondation Biermans-Lapôtre library, I followed in the footsteps of those forerunners who fought for us. I went back to the ground-breaking texts, in particular the one for the European Union Consolidated Treaty. And I used the light, transparency and tranquility of those peaceful places to think about those words and let them once more ring out.

A little later, in June, I went to the Venice Biennale, and I once again found myself in one of those places which are both the result of an interest in culture and the outcome of an internationalist and pacifist movement. Since the 19th century, people have devoted all their efforts and their money to peace among peoples, and they have had a thought for future generations. They have put public issues well ahead of their own interests, and have made that an ideal. Of course, this happened in a paternalistic context which is altogether outmoded, while colonial empires were being established, but the principle behind this action oriented towards others is still admirable. While I was thinking about this civic commitment, in the Giardini in Venice, I happened upon the installation of the Traumnovelle architects in the Belgian pavilion. It conveyed the same concerns as my own, in an extraordinarily precise architectural language. I wrote to those architects to ask for permission to film in that space.

Not long before the end of the Biennale, in October, I duly returned to Venice, with a suitcase full of costumes for my characters, and my head brimming with ideas, but without having as yet written a word of script. Before setting off, I had gone to see the couturier Jean-Paul Lespagnard. He was just back from a trip to Mexico, and was very tired: “Here, take this too”, he said to me, holding out a yellow coat, before going to take a short siesta on the sofa in his studio. Once on the spot, I immediately felt that that outfit was the right one, that with its colour it instantly made sense with regard to the very specific blue of the installation. I didn’t even open the suitcase with the costumes. There were still lots of visitors in the pavilion. I started to film and make my script up as I went along, and take some test shots in that space. People thought my performance was part of the work created for the pavilion. Those test shots, getting things adjusted, took me four days, from Thursday to Sunday. The public’s presence created a very dense atmosphere which helped me a lot to find the right words to sum up the moment we are living in, and the aspirations and expectations that we all share. On the Monday morning, with the Giardini closed that day, in barely three hours I filmed the definitive version based on the pre-editing.

These four videos reflect almost two years of thinking, at the whim of the events which punctuated public life and gave the mood of the day its flavour. To start with I had absolutely no plans to make a series, and even less something proceeding from one video to the next, leading to a kind of conclusion. I myself am surprised that the last one managed so well to anticipate the goings-on we all know about and link up with the lines which some of the characters utter.»