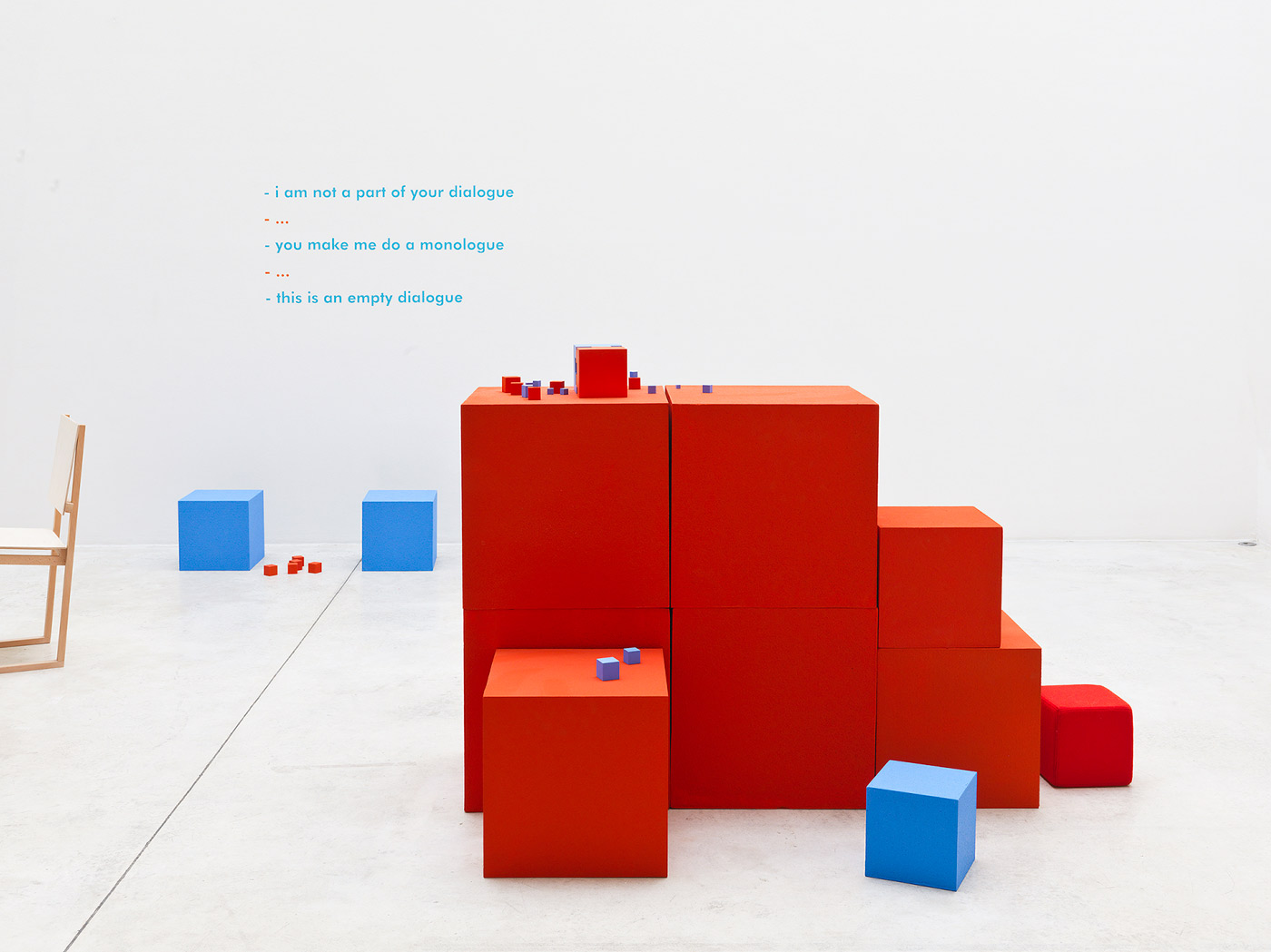 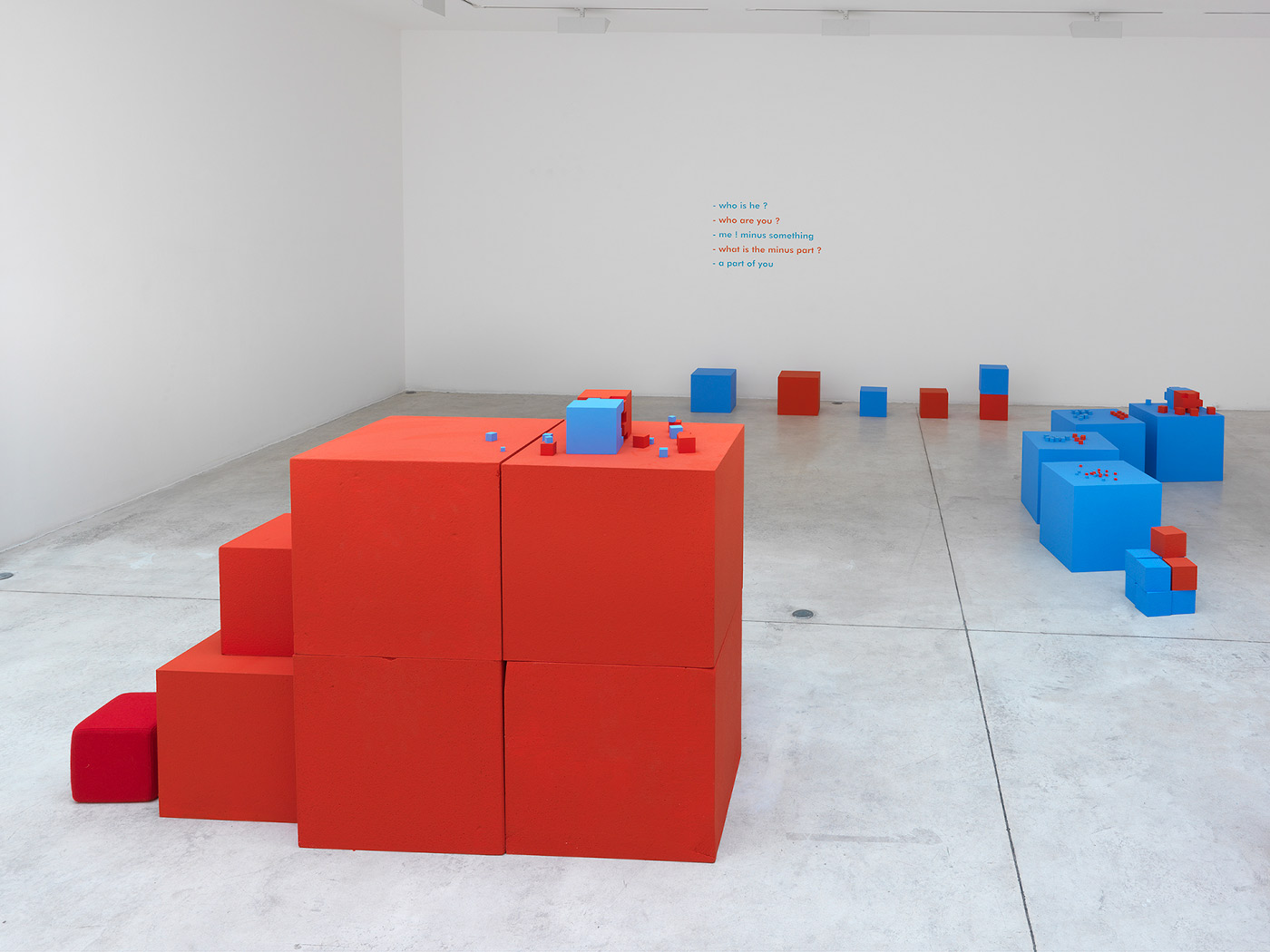 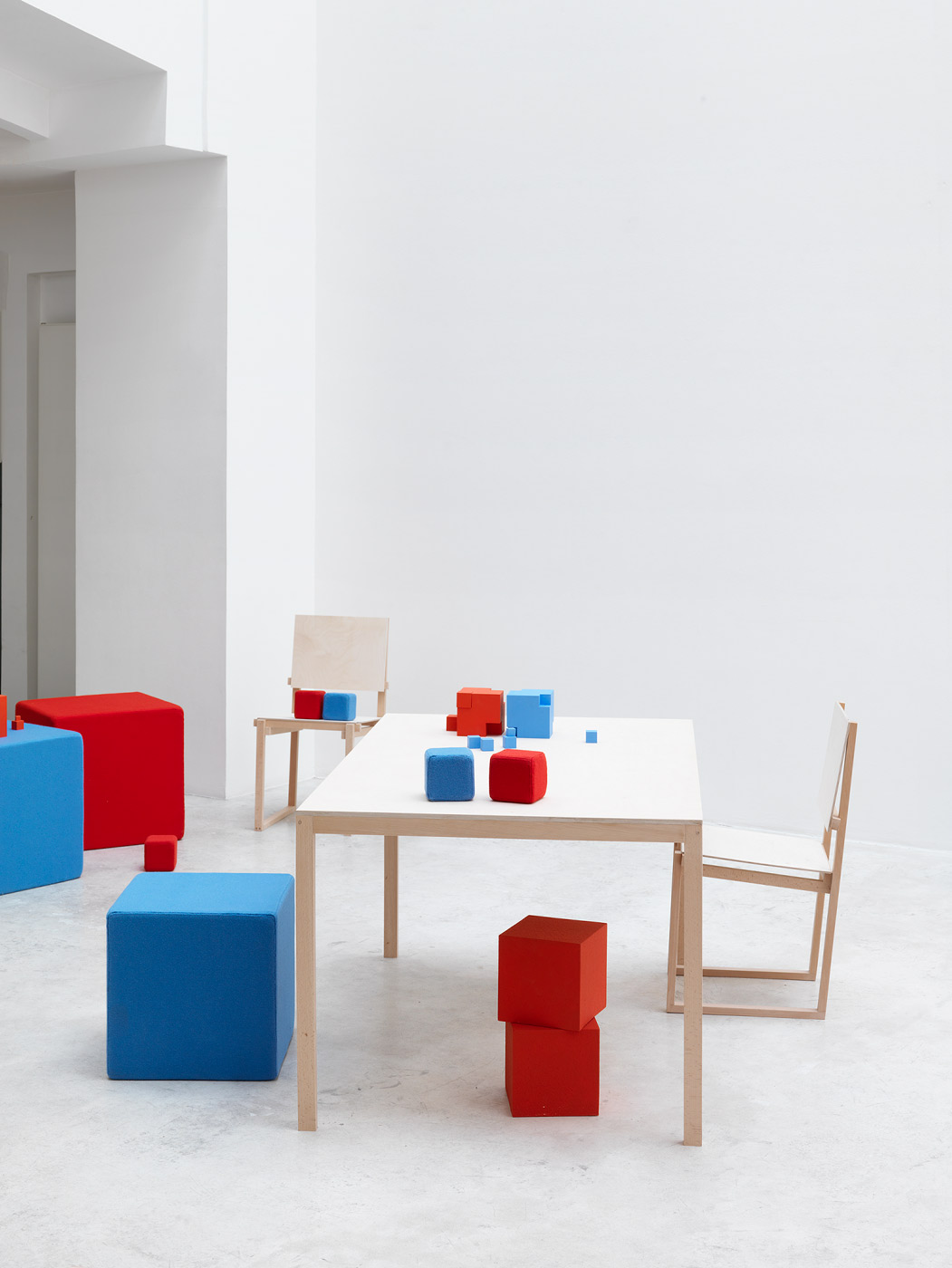 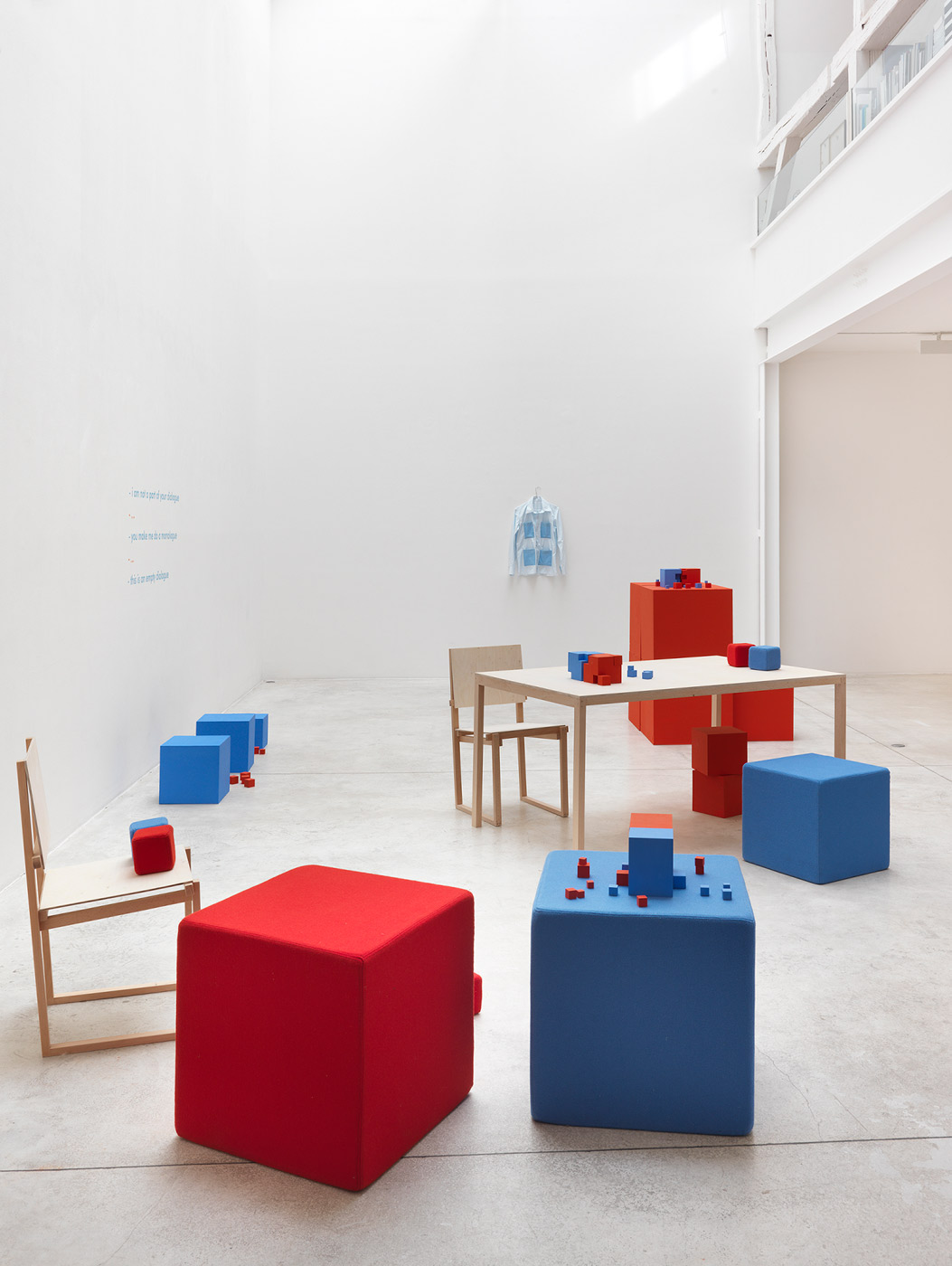 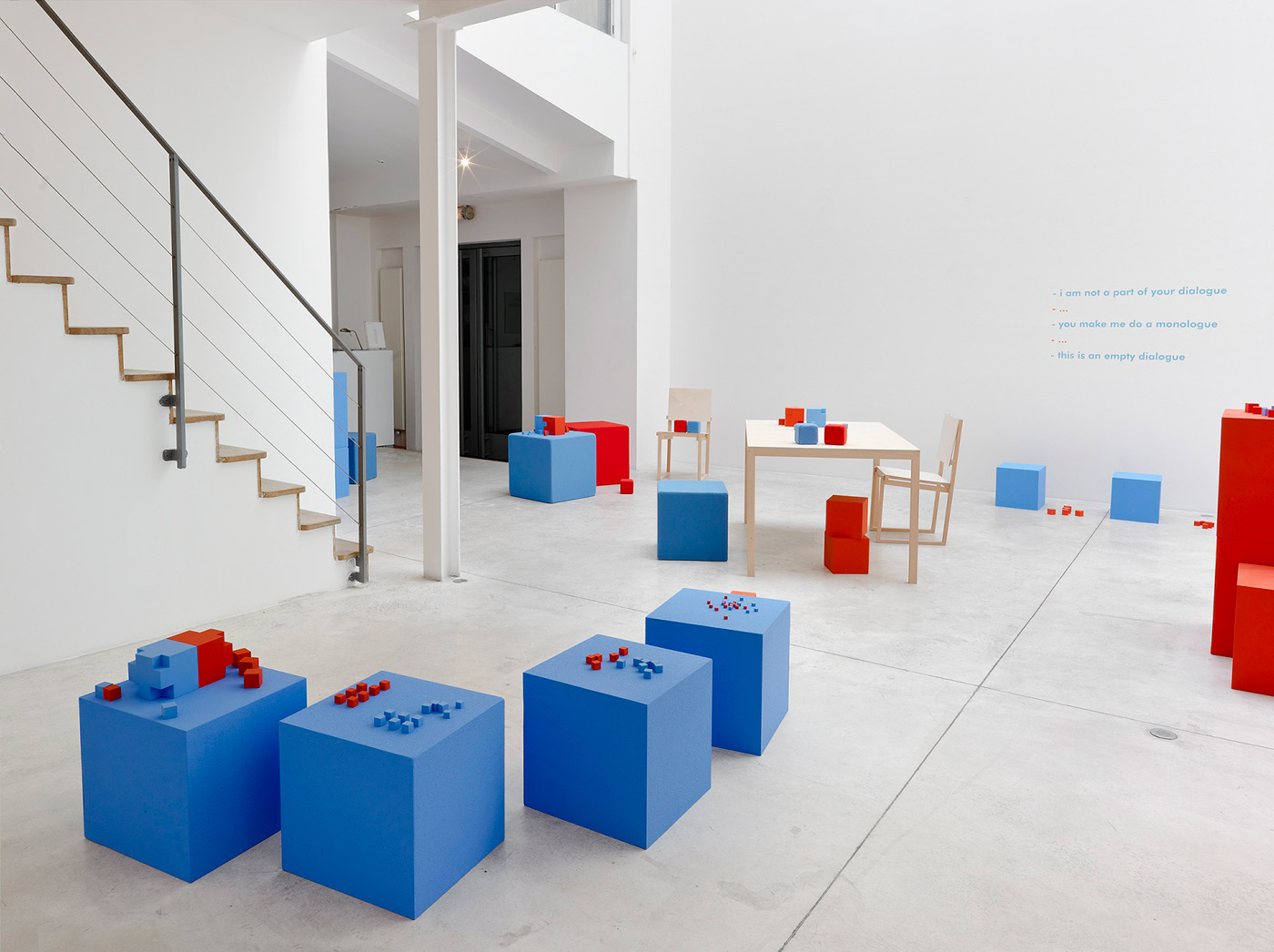 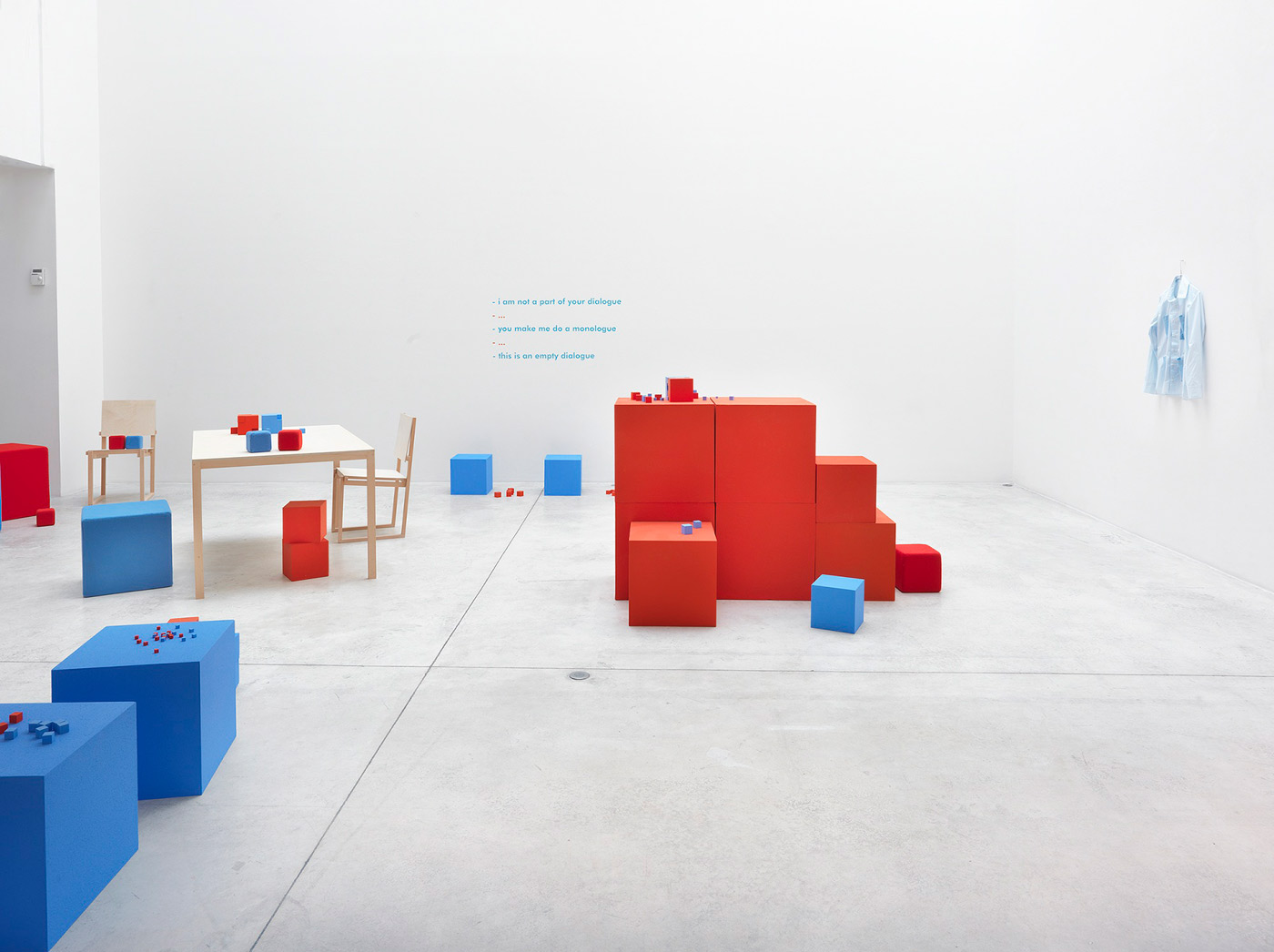 "The exhibition in Michel Rein gallery a part of elements, objects and groupings, from small cubes to the large volume of the Two persons house" currently being built in a garden in the Lapa quarter of Sao Paulo.

This house lays out a relationship between two people, two selves, A and B, two spaces, intertwined together. The house constructs this "relationship" or bipolarity in the design of the space, the space itself marked by two colours, red and blue. For these two people, living in this house would be what Maurice Merleau-Ponty calls "the power to let yourself be undone and redone by an actual other"

The house is made up of several discontinuous elements or grouping of elements. There are three types which are principally differentiated by their size. They could be described as static, mobile and ephemeral.

The principal of cubes and allotments creates equivalence between the objects. Each cube, whatever its size, is not to be considered as a part of a whole ? that of the "two persons house"- but as a whole in itself. Following this idea the cubes of the "two person house" can be devided into three groups.

The first group is composed of two major blocks interlocked, which together form the core of the house where the two people can live. Those blocks are connected and open onto one another. They are of two different colors, blue and red, both colours denoting a person. The red and the blue give their mark to all the groups of elements in the "two persons house".

The second group is made of elements small enough for one or two people to handle, carry, and move around. They can be re-positioned and permutated. Some fill gaps and obstruct windows and connections between the two blocks of the first group, and thus seem to be directly part of this previous group. They can be found or placed inside or outside the house, far from or close to it, sometimes very far indeed, in an unreachable place even. The volumes such as furniture and clothes form part of this group which is filled with numerous though unnumbered elements. They moves from their space of existence to the gallery space and beyond.

The third group of elements can sit in the palm of the hand, or fit in a pocket. These elements, although part of the house, are so small that they can be disseminated, scattered or mislaid. Thus dispersed they redistribute the house's "relationship" outside of its own spatial and static limits, in the gallery for example. The house dissolves, and thus can form again in a new setting.

"Two persons house" articulates two principles. A principle of scale, leading from large, habitable, objects to very small objects - which can be held in the palm of the hand or lost- and a principle of a separation of space between two people characterised by two distinct colours. As the scale diminishes the boundaries between the two people becomes blurred. With each scale change a new scale relation is created along with a change of direction: from the exhibition to the scale model, from mobile elements to abstract constructions.