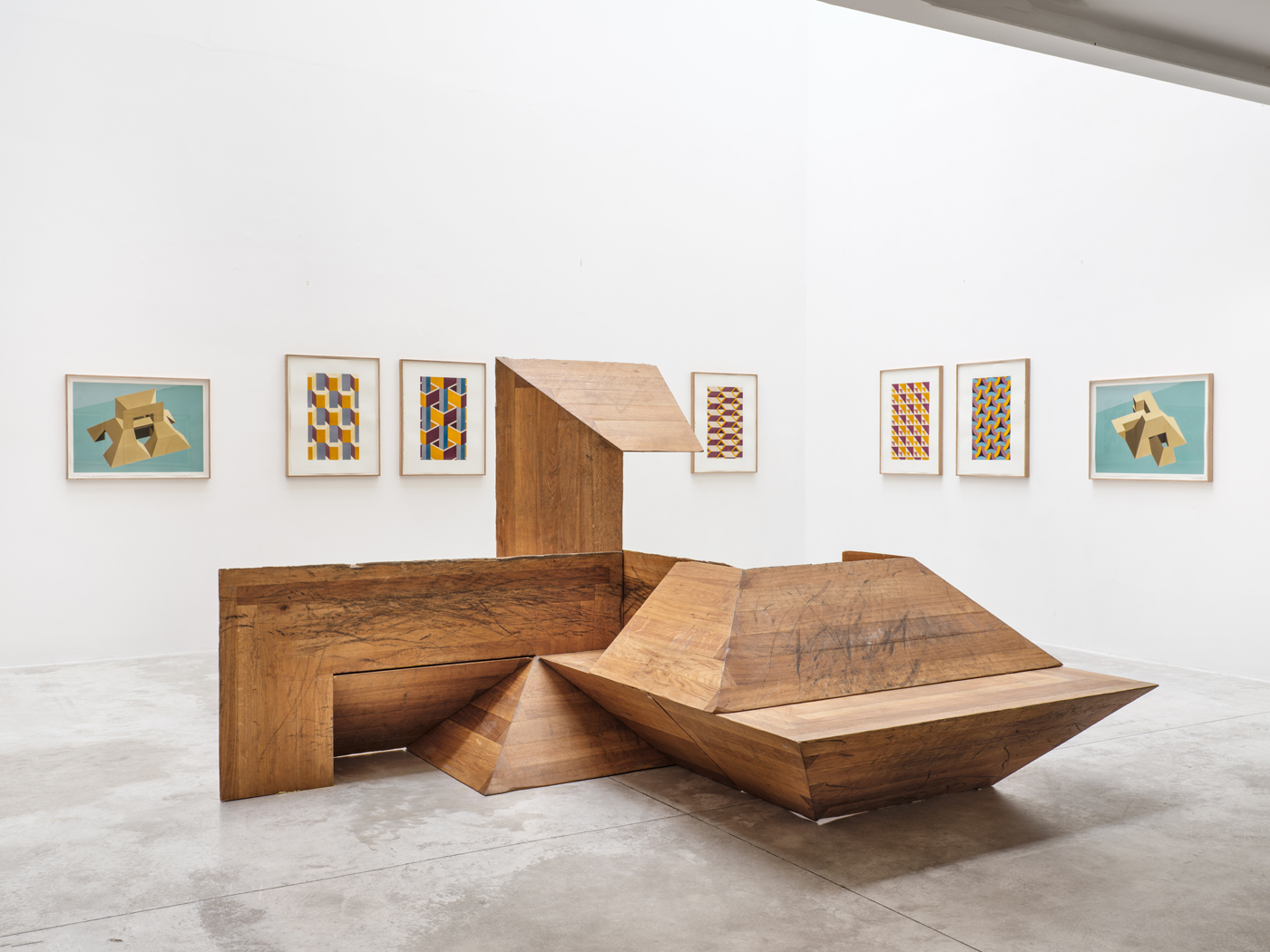 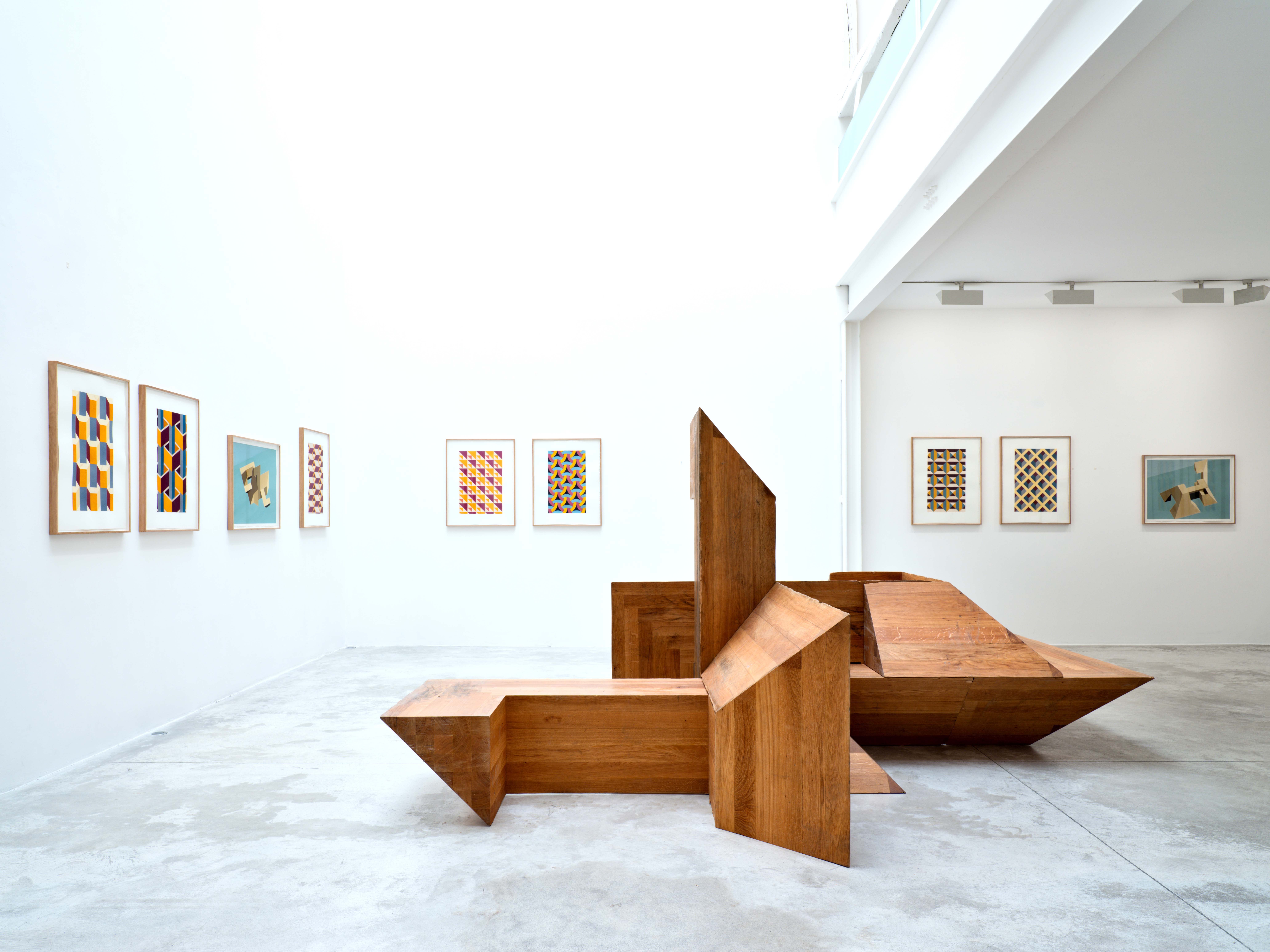 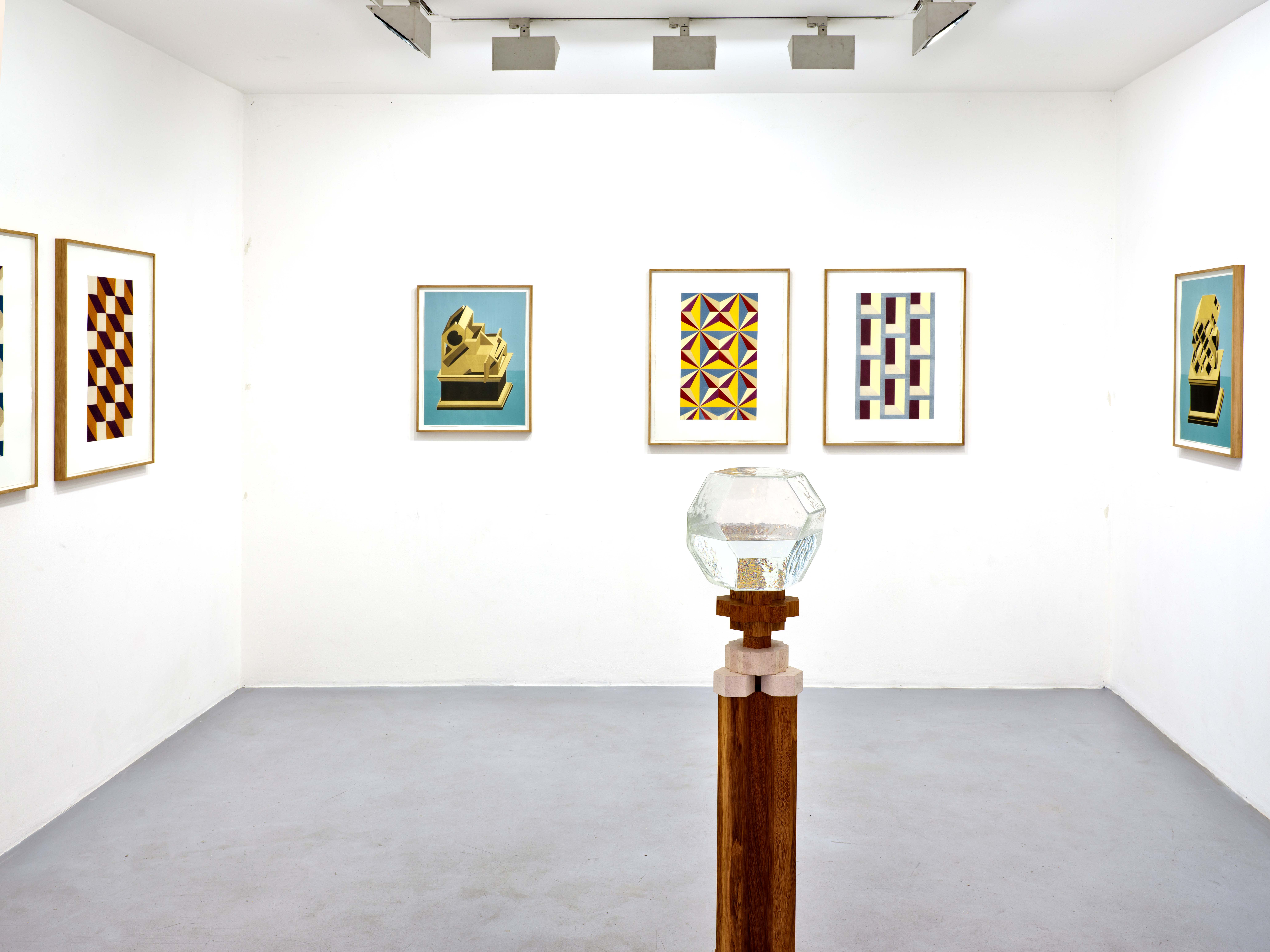 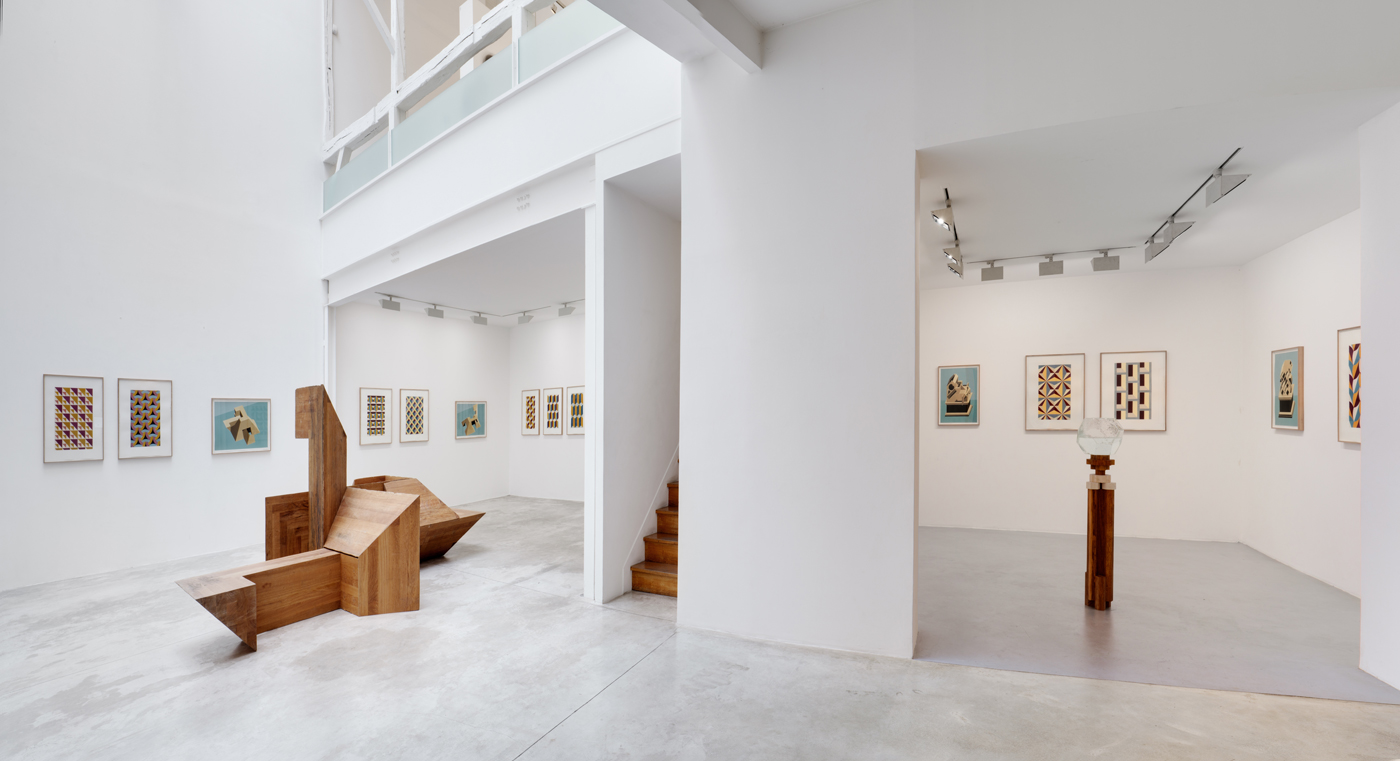 At Michel Rein, displayed in the same sequence as in the Tuscan monastery, a series of 23 coloured paper collages reproduce to scale the mosaics of Monte Oliveto’s “marmi finti”.  This is a frequent procedure in Zarka’s practice: excavating in a wealth of existing forms and repurposing them in a different context, further complicating their implications and expanding their connections. As Guillaume Désanges states: “Raphaël Zarka does not seek to give form to his ideas, looking instead for the ideas underlying forms.” [1]

Such is the case of the Regular Scores from Zarka’s Paving Space project, a series of modular sculptures that replicate a model produced by German mathematician and crystallographer Arthur Schoenflies (1853-1928) as part of his research on the regular partitioning of space. Beyond their use as means of visualizing his ideas, the Schoenflies modules generate forms that Zarka appropriates for sculptural purposes through operations of scaling and careful material manufacture. This migration of intention extends to skateboarding, a practice that has a prominent place in Zarka’s work. The Regular Scores are instrumental sculptures which can be performed by skateboarders who leave visible traces on their surfaces. It is a perfectly built, yet broken geometry filled with the tension caused by the convergence of references and uses it contains. The surface of the sculpture, freed from its demonstrative mathematical function -as Zarka allows gaps between the modules that should be otherwise perfectly joined together-, accommodates the evidence of a “geometry of movement[2]” embedded in skateboarding. Its modular nature allows for it to be reconfigured, enacting an oscillation between virtuality and actualisation throughout the exhibition.

The drawings of potential configurations that Schoenflies modules can produce multiply the possibilities of representation that may or may not be realised as sculpture. In a smaller room of the gallery space is displayed a sculpture titled The Third Man (after Arthur M. Schoenflies), where a glass polyhedron (a truncated octahedron) half-filled with water is placed on a plinth whose cross section corresponds to the hexagonal shape of the side it sits on. In the spatial analogy with Monte Oliveto, this room refers to the choir of the church. Some of Giovanni da Verona (1457 circa – 1525)’s intarsias that decorate the seats of this choir allude directly to the tools of representation and are in themselves incredible examples of perspective and representation of polyhedra. Even if not visually present in the exhibition, they still produce content relevant to it.

There is a profusion of connections between the history of ideas and their representation that run through the geometer-painter Pierro della Francesca (1415-1492) who mentored Luca Signorelli and taught mathematics to Luca Pacioli (1447-1517), author of The Divine Proportion. In the 1495 portrait attributed to Jacopo de’ Barbari, Pacioli appears next to a hanging rhombicuboctahedron half-filled with water, its proportion being that of an adult human head – a third head in the portrait. The “multiplinth” makes reference the illustrations in a treaty by seventeenth-century German stonemason Peter Halt who depicted polyhedra not floating on the page, but sitting on a supplementary structure. In Monte Oliveto, Zarka reconnects all these elements through Schoenflies who, among all the thirteen Archimedean solids, only worked from the truncated octahedron.

The Renaissance is credited with a sheer development of perspective, an operation that conflated geometrical studies and draftsmanship. But, as Carlo Ginzburg points out, the use of perspective as a visual metaphor has been applied since Machiavelli to politics, philosophy and historiography to describe the multiplicity of potential viewpoints on reality. Zarka’s association of different forms of knowledge and his appropriation of geometries associated with their historical representation seem to amplify the relevance of an anachronic layout that conjures up both abstract and actual renderings of reality.

[2] Zarka appropriates this term from a work by Schöenflies of the same title written in 1886.

[3] Catalina Lozano is a curator and a writer, she is currently the associate curator of Museo Jumex, Ciudad de México, Mexico.