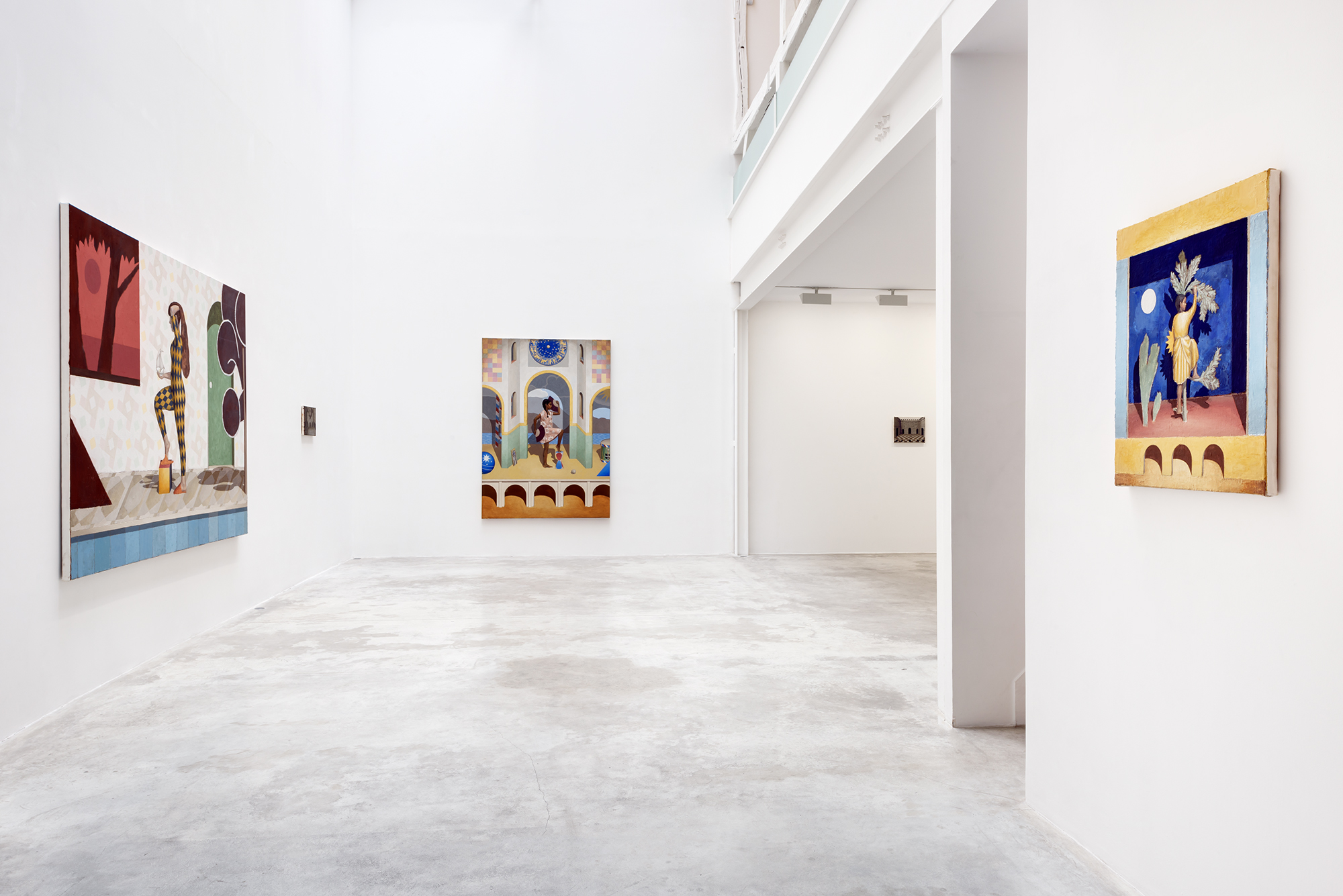 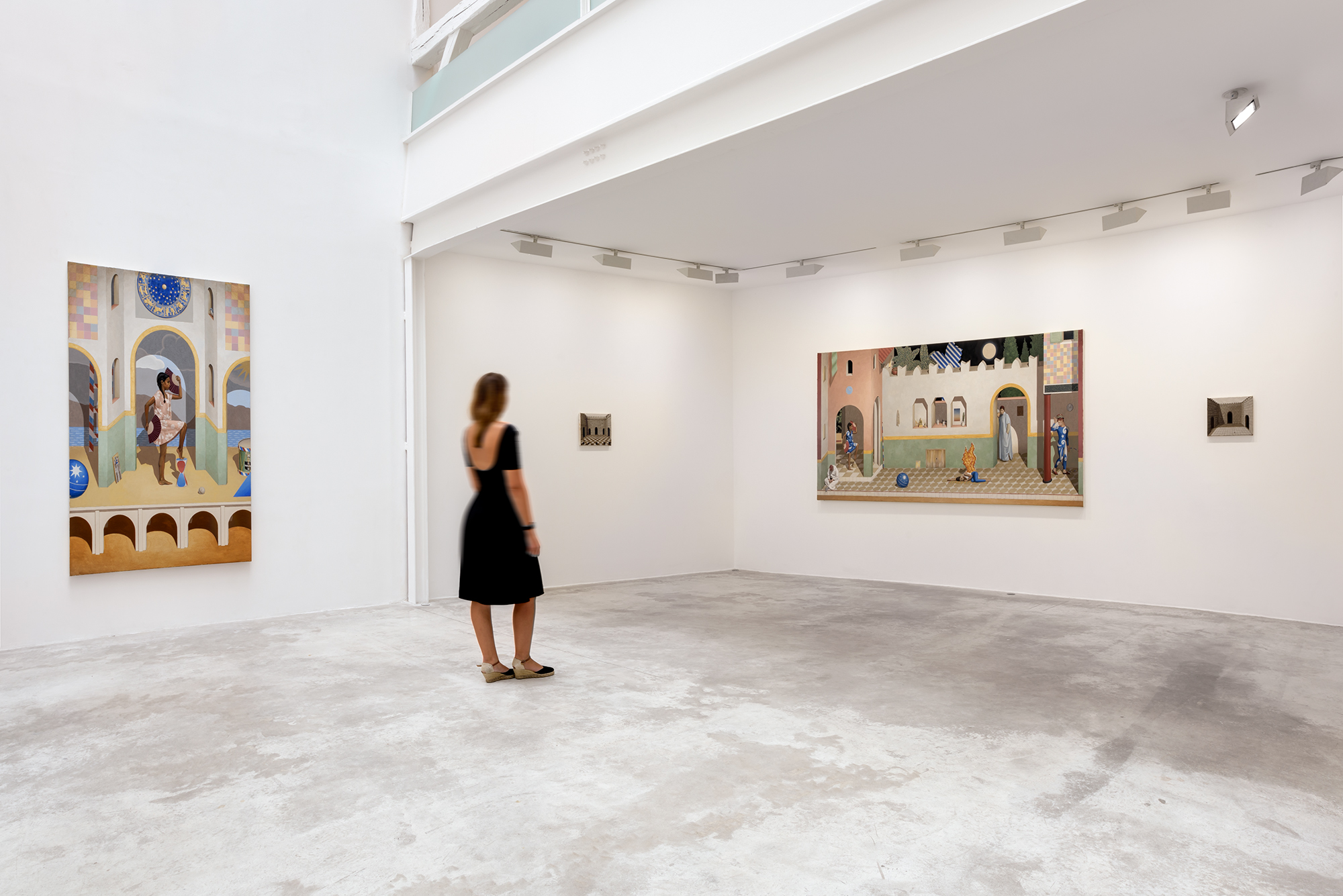 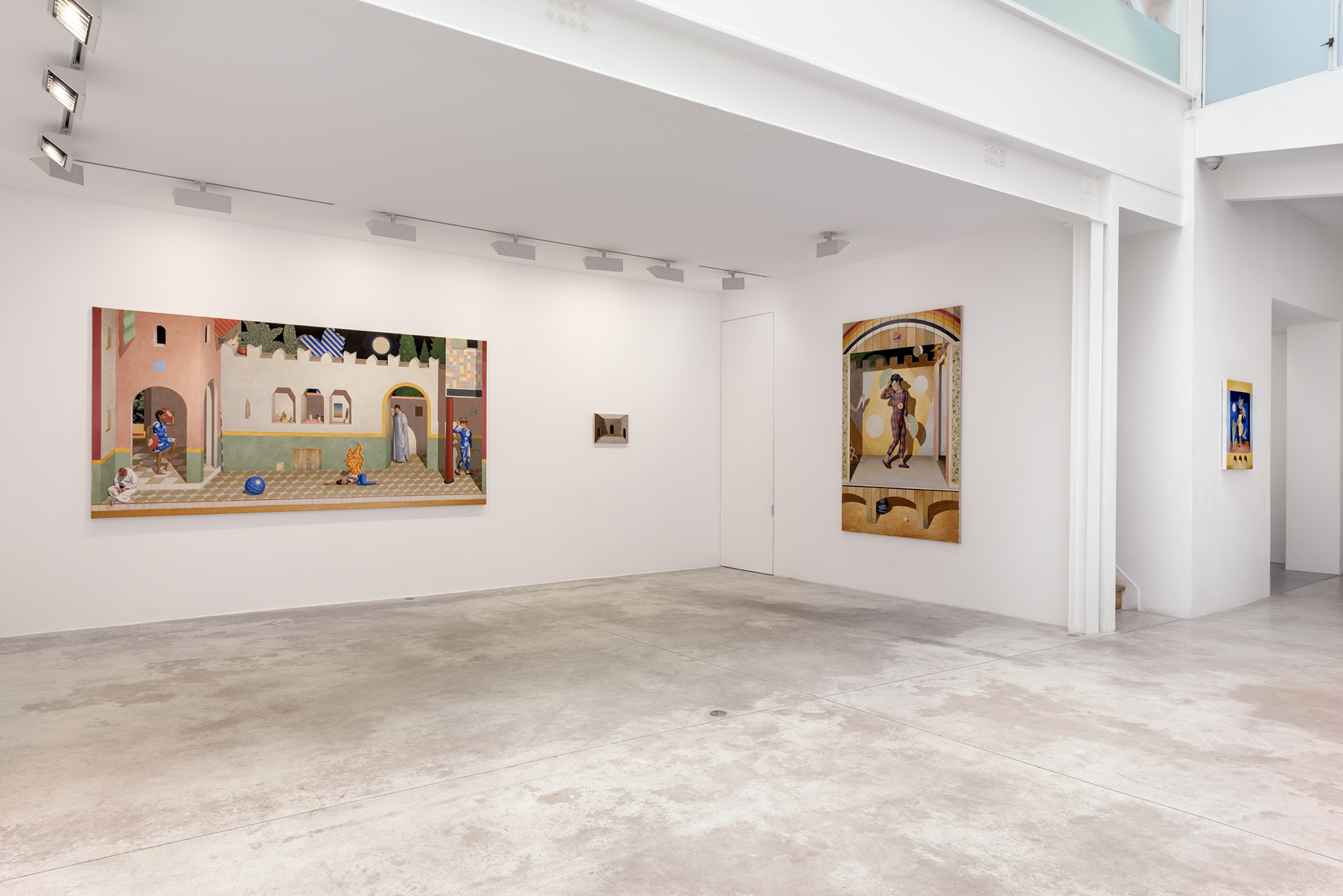 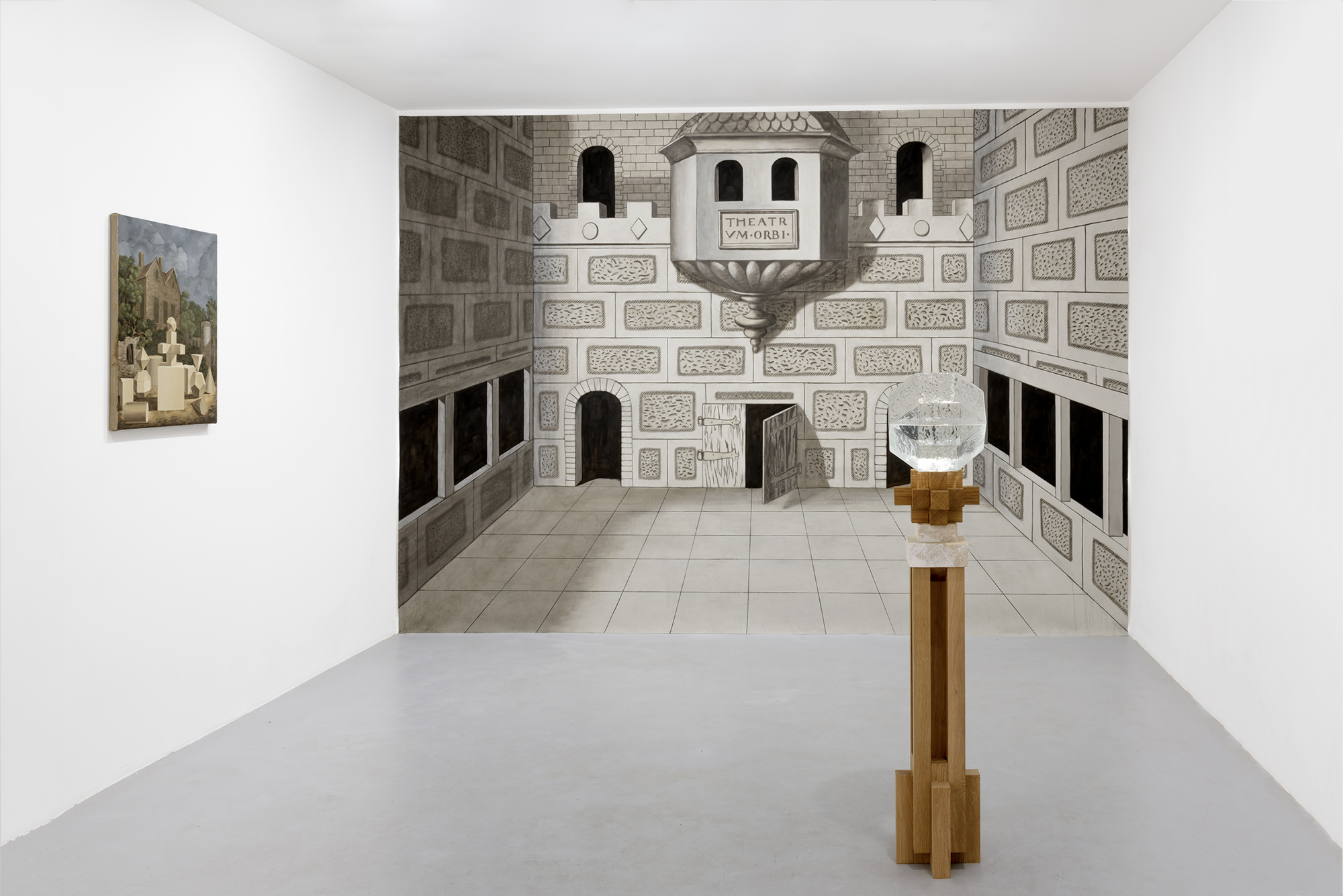 In front of us, a large canvas is stretched out: a cobbled courtyard surrounded by high crenellated walls. The canvas takes up the entire wall, reminiscent of a theater stage set. The only difference is that a set normally  adjusts  its  perspective  to  that of the spectator’s position; it i  a false extension of it.

The stonewalls painted on the canvas do not prolong the walls of the gallery and a gap has been inserted between the space of reality and the fictional place, a discontinuity which gives up on illusion: the space that opens up is not ours, it is other. To the left of the abandoned courtyard there is a motionless
landscape, inhabited by strange polyhedrons. No human presence —the only bodies there are geo metric. Christian Hidaka did not invent the two scenes that open the Players exhibition; he borrowed them from two works in which they illustrate two methods  of organization, in time and in space. The polyhedron landscape interprets a plate from a mid -18th century treatise on linear perspective by the English painter Joshua Kirby. The painting on the wall picks up an etching from the Utriusque Cosmi Historia , published between 1617 and 1619 by the hermetic philosopher Robert Fludd, another Englishman. In a passage dedicated  to what he calls the “techniques of the Microcosm”— techniques by which we organize our internal activity—Fludd speaks of the  art of memory. This art, passed down from classical rhetoric, recommends orators to translate knowledge or speeches into striking images “striking” images, which is to say strange, peculiar, for we remember the bizarre but forget the banal. The  orators would then place these images in a mental space with a known and unchanging plan. Whenever they would revisit this space they would come upon the images that held their memories. Fludd’s method recommends that we choose theater stages to serve as memory spaces. It is one of these theaters that Christian Hidaka reinterprets in the first room of the exhibition. As for the images that must populate this stage in order to change it into a memory space, they appear in the second room...

Between the colonnades, on the two -colored tiling and beneath the arcades of places that have lost none of their geometry, a troupe of Players interpret strange and motionless pantomimes. Christian Hidaka’s Players are few in number and return from one composition to the next. Here, they are harlequins, young female acrobats, men in djellabas, a silhouette stretched out beneath a fire...In other paintings we find women in kimonos, musicians, silhouettes shaded by parasols. These figures are signs because of their style, linear and flat; because of their outlines, as immutable as the strokes of a digit or a letter; because of their function too: they signify, but in a language whose rules we do not master. They wield a limited number of accessories fans, spheres covered in stars, multicolored cubes—which seem to function as accents. If the young girl were a letter, she would be pronounced differently when her fan is purple than when it is red.

Christian Hidaka’s paintings function through a condensation of inspirations. There are Fludd’s theaters of course, but there is also the Italian Trecento with its tilted tiling, its closed spatiality, its pale, muted fresco-like colors. Images of carnivals also come to mind, as do Venetian painters, Pietro Longhi’s masks. In other instances, one wonders if the fans playing against backgrounds that resemble paintings are not meant to evoke Noh. Then one is struck by the similarities between  videogames and this universe where volume is expressed through accentuation of the plane, where figures switch outfits and accessories, just as gamers dress up and equip characters to their liking. The strangeness of this world is similar to the images of memory: it can only be deciphered by the one who composed it.

Walking around the exhibition, places and scenes follow one another in a regular scansion; the gallery in its turn is transformed into a memory theater. It can be revisited in the mind: first the antechamber with its empty spaces, thereafter the main room with the Players performing their mysterious ceremonies. One painting after another, the visit can be reconstructed. But we will always be unable to break the seal of these images and gain access to the knowledge and the speeches that they hide within. The image remains image. Nothing can unfold the enigma.