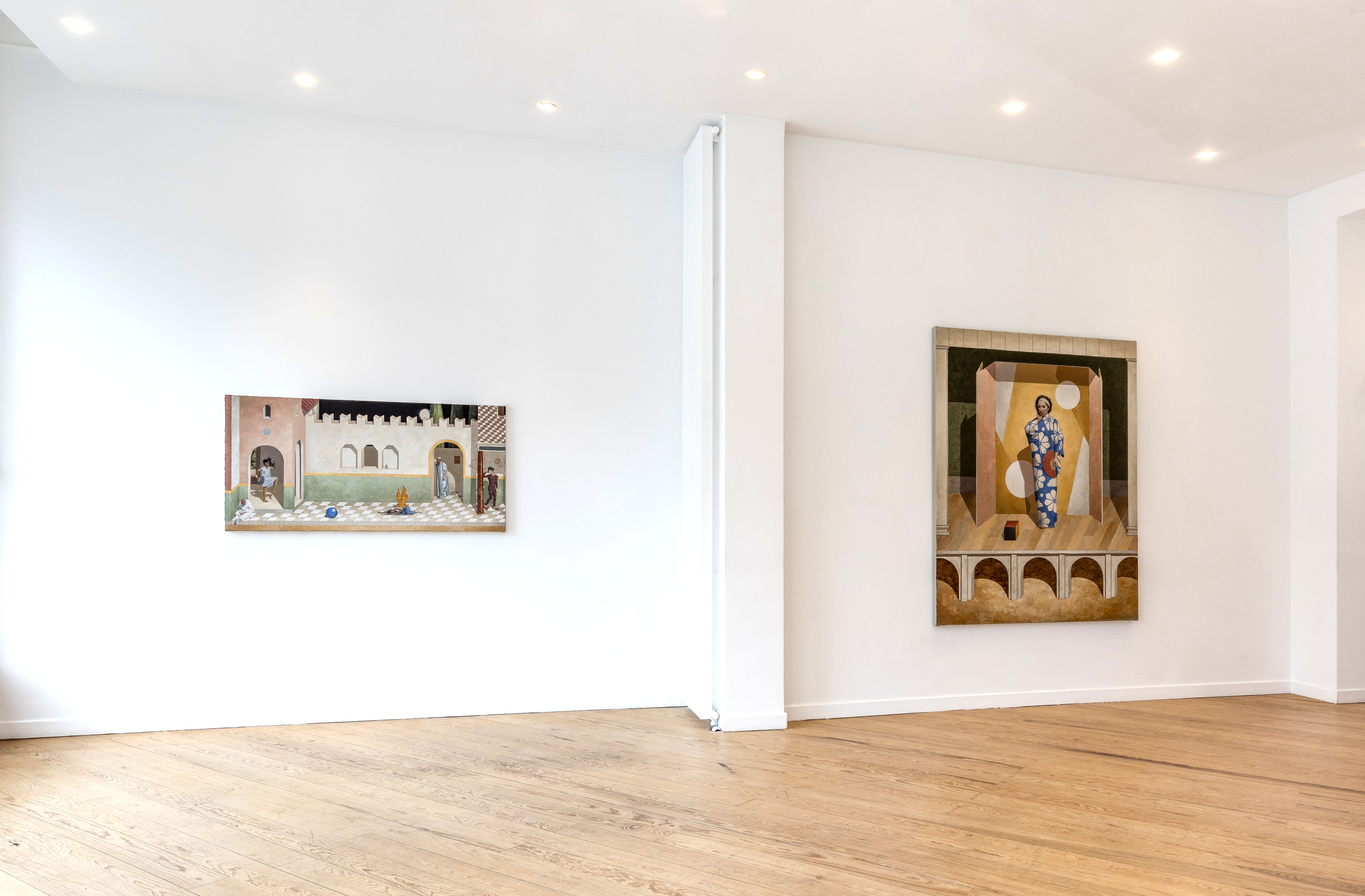 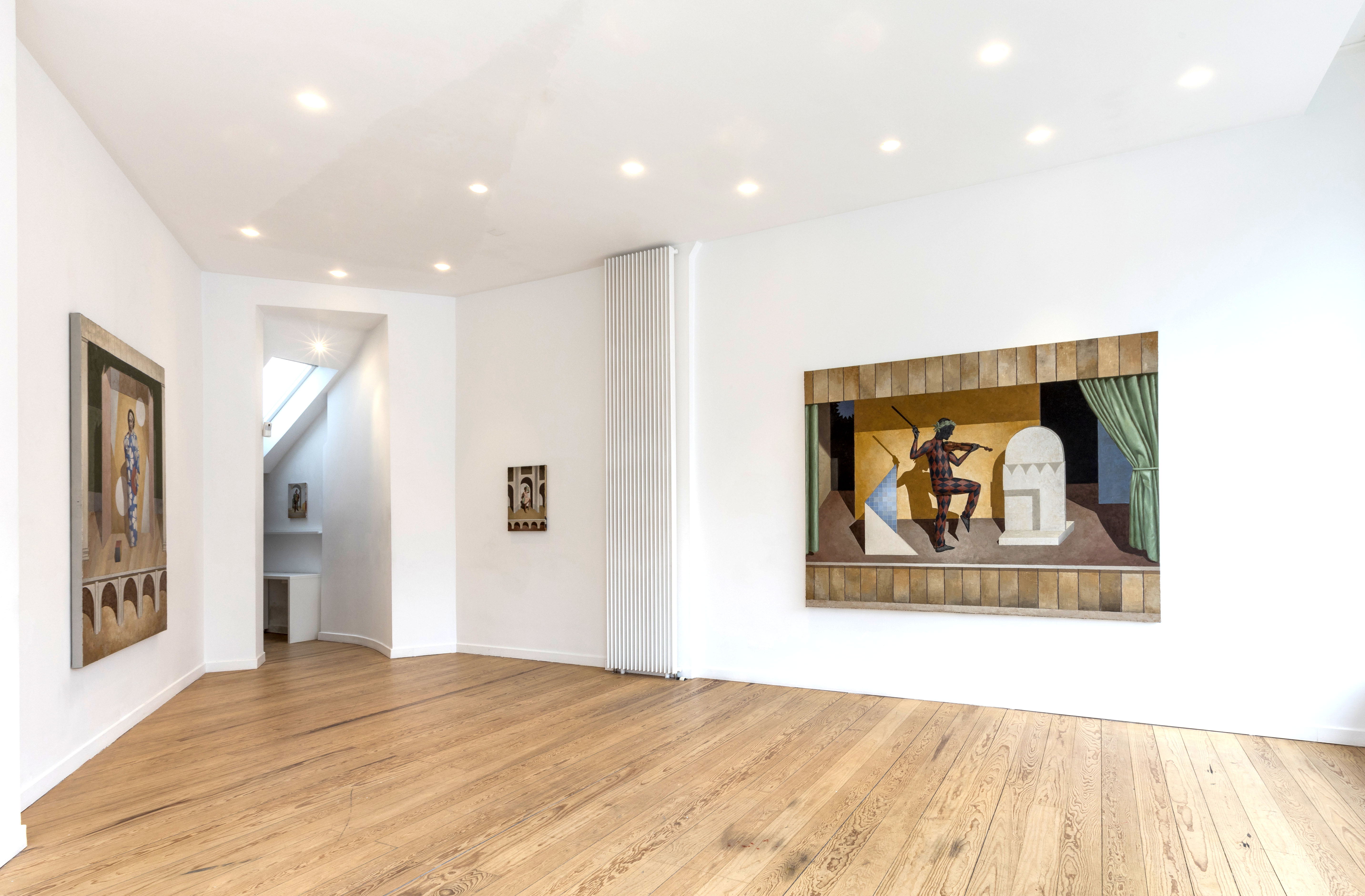 Circuses and saltimbanques were instinctively shared subjects of Picasso and Apollinaire between 1904 and 1905, and both painter and poet frequently combined circus, fairground and theatrical imagery in their works. Picasso’s circus works of this time, and his monumental canvas Family of the Saltimbanques (National Gallery of Art, Washington, 1905), coincide with two draft poems entitled “Spectacle” (“Performance”) and “Les Saltimbanques” (“The Acrobats”), which Apollinaire penned for Picasso on 1 November 1905, and featured travelling circus groups, fairground and theatrical imagery of nomadic performers of various kinds. Apollinaire later revised “Spectacle” under the title of “Crépuscule” (“Twilight”) – which was published in Alcools in 1913 –by reworking the last stanza of the poem that he originally gave to Picasso in 1905 to include a reference to Harlequin Trismegistus. The verses that the poet wrote for his friend in 1905, “Spectacle” and “Les Saltimbanques”, have since become two of the most popular poems of the twentieth century.

The iconography of Apollinaire’s poems are therefore intimately bound up with the imagery of Picasso’s Family of the Saltimbanques painting, and as a symbol of the poet’s and painter’s fraternal complicity. Picasso forever kept his great friend’s blue postcard (Musée Picasso, Paris) inside a 1905 sketchbook: a sketchbook filled with images of harlequins, saltimbanques and other travelling players, and underpinning both the poet and painter’s creative partisanship. These were poems that Picasso secretly guarded throughout his life, celebrating Harlequin but based on the great mythological character Hermes, and conflating Harlequin Trismégiste with the magical figure Hermes Trismegistus (Thrice Great), keeper ofthe underworld, god of fertility and author of the occult treatise and creation myth The EmeraldTablet, which was adopted as a seminal text by European alchemists.As art historians have observed, the poems “Spectacle” and “Les Saltimbanques” take the arts of magic and illusion as their main themes. These poems eulogize Picasso as the magical, demonic figure Harlequin Trismegistus. For the poet was well aware of old Walloon legends regarding “her-lequin” – a soul departed from hell.

In “Spectacle”, Harlequin (Picasso) is identified as a sorcerer whose magical power over nature helps him to bind heaven and earth with the supernatural act of unhooking a star. Meanwhile, the hanged man, who gives Harlequinhis theatrical cue to begin the performance, takesthe symbol of a traditional Tarot card. In “Les Saltimbanques”, however, Picasso is portrayed as Harlequin Trismegistus the alchemist, who transforms the “doors of grey inns” into a scene of “drums and gilded hoops”, so as to draw a poetic analogy between art and alchemy.This poetic symbolism is most clearly expressed in SmallPlayers(2017), which, to my eye, evokes the theatrical setting of Parade;the tantalizingequilibrium of Acrobat on a Ball (Pushkin Museum Moscow) and Circus Family (Baltimore Museum of Art), the latter imagesdescribed by Apollinaire in The Cubist Painters (1913) as “Adolescents sisters, each one acrobatically balancing high on a ball, lightfootedly set the spheres spinning radiantly as the planets.” Apollinaire here intimates a direct connection between the heavenly spheres and the acrobatic displays of Picasso’s entertainers: “They can leap into the air and their best turns are movements of the mind.”Hidaka’s acrobats and players likewise mimic the subtle balance between the artist’s inner and outer world, his musical Player–who has one foot between the boundary of the subliminal and the wider universe–majesticallyconjuring up the eternal mysteries of artistic creativity. Equally in Marabout, Hidaka’s dark magician/instrumentalist represents the artist asdivinity, beauty and art his universe. ‘The spectator should be devout and respectful”, warns Apollinaire,“for they are celebrating silent rituals with painstaking agility.” This imagery also held a personal meaning for Picasso and, as the artisttold Josep Palau i Fabre, depictions of circus performers first began to appear in his work after he happened upon a troupe of wandering acrobats on the Place des Invalides, traditionally a site for fêtes foraines (fun fairs) in Paris. Apollinaire, nevertheless, took the credit for sowing the seed of the circus “in Picasso’s soul... whence it grewinto marvellous works of art.”

We know from Fernande Olivier and Picasso’s other friends that the artist loved visiting the Cirque Médrano, mingling with acrobats and clowns in the circus bar, and listening to the tales of the Spanish owner “Boum-Boum” (Géronimo Médrano), as well as other compatriots on the road. Henri de Toulouse-Lautrec and Georges Seurat had earlier depicted the same circus (then called Cirque Fernando), but, whereas their paintings show performers and the audiencein a ring or beneath canvas, Picasso preferred to highlight their itinerant, gypsy-like qualities by placing them outside.The significance of the subject is not only poetic, but has a fundamental bearing on the driving forces behind the opposing values of Picasso’s later Synthetic Cubism, especially seen in the processes of his assemblage sculpture. This is something not loston Hidaka, whosepixelated flames, magical circles, balls, and strange cubistic setpieces in Small Playerset al, become an embodiment of his own commedia dell’arte. The legendary characters and magical symbolism present in Hidaka’spaintings are anunintentional self-portrait also– a representation of the immortal artist-cum-performer as a meditative and insularvisionary. As one scholar has observed of Picasso’s harlequins and saltimbanques –something equally true of Christian Hidaka’s paintings –“For Apollinaire, the acrobats’ painstaking and ritualistic performances epitomise [that]... the human potential to outreach our mortal condition is most gloriously realised in the timeless work of Picasso, the painter in whom slumbering deities are reincarnated; with all-seeing eyes, outstaring the sun, he remakes the world in his art.”