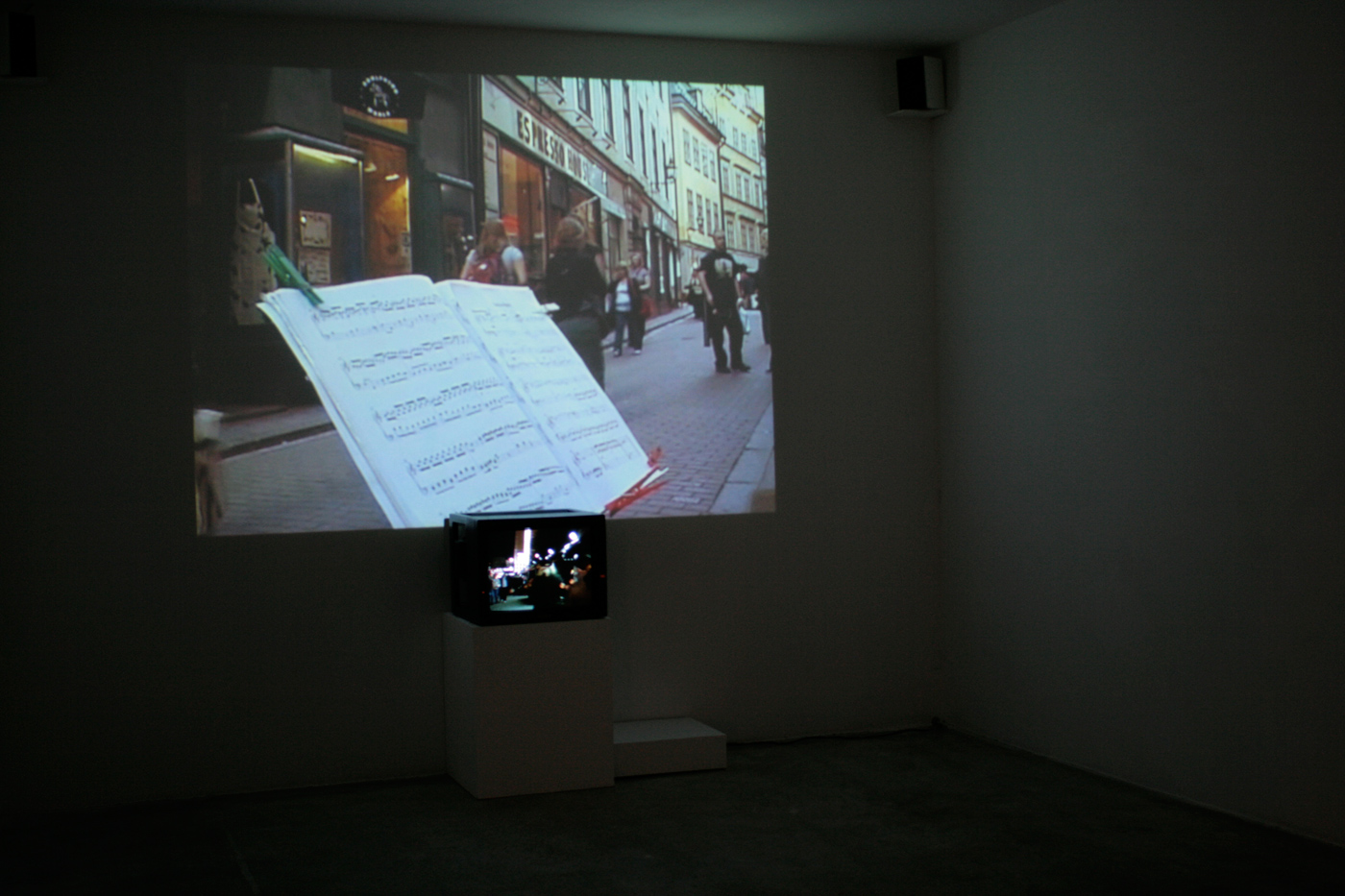 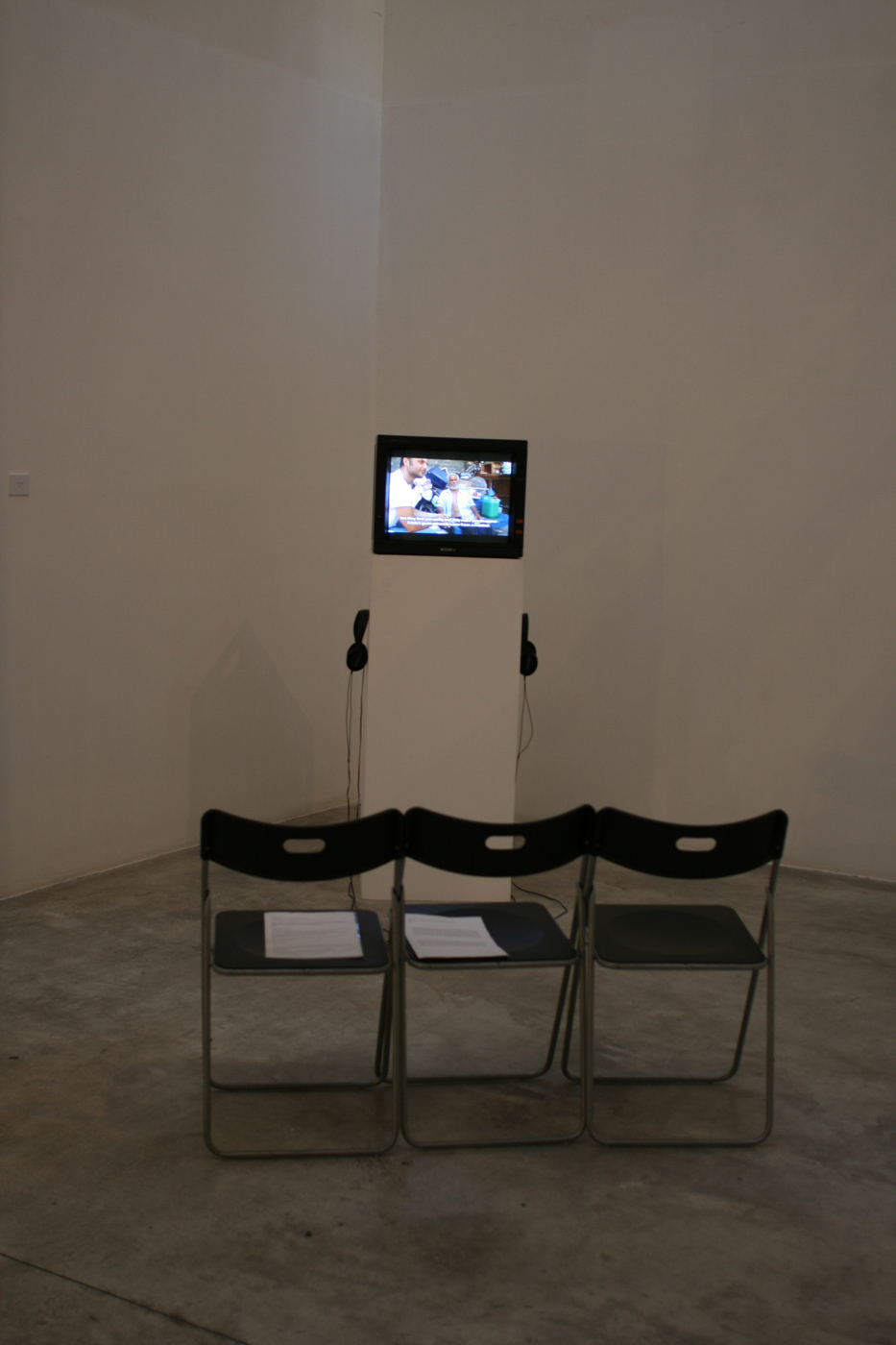 For his second solo show at galerie Michel Rein, Mark Raidpere is presenting four new video works. His first show at the gallery in 2006, soberly titled Videos, took as its point of departure the artist's family circle, but his new works encompass broader subjects.

For Vekovka (2008), Mark Raidpere films a ballet of passers-by, carrying various household and decorative objects, all new and wrapped, from the window of a train stopped at Vekovka station, in Russia. The camera mimics the eye of one of the passengers and follows the ceaseless toing and froing of the hawkers and vendors. As voice-overs, two passengers, one Estonian, the other Russian, are talking to each other. To the content of their conversation, about the Baltic and Russian identity, the image opens our eyes to a form of midland Russian smalltown everyday and its inhabitants.

In Majestoso Mystico (2007), Mark Raidpere juxtaposes images broadcast by TV during the 2007 riots in Tallinn, and those of a Russian musician, former member of the Tallinn orchestra, now a street artist in Stockholm. This installation is the outcome of a coincidence. On 26 April 2007, during a residency in Stockholm, Mark Raidpere organized  a shoot involving the musicians Ivan Shumilov and Björn Svensson, so that they could play the theme tune from the film Silence of the Lambs in downtown Stockholm. At the same moment in Tallinn, Mark Raidpere's native city, riots broke out between the city's Russian minority and the forces of law and order, after a decision taken by the Estonian authorities to  remove from the city centre the monument in honour of  Russian soldiers.  Affected by this outburst of violence, the artist decided to use the images as a counterpoint to the performance of the two artists met in Stockholm.

Dedication (2008) takes on the form of a family portrait. Linking up with some of his earlier works-Shifting Focus, Father and Voiceover (2005)-Mark Raidpere films his parents in a static shot. On the painted doors of the piece furniture they are filmed in front of, we can detect his reflection behind the camera. Raidpere calls for silence and concentration; his mother sometimes smiles when she hears the music of Erkki-Sven Tüür.  After the shot, the artist gets his parent' impressions.

"Mark Raidpere (...) presents his work as not simply a linear expression of what was previously considered private, a disclosing of what had been in the closet, but rather as a rejection of that either/or scenario which attempts whether in arts or politics to determine who may display or disclose what, and when. Time, then, becomes the last, receding resort. Jörg Heiser, "Mark Raidpere: Up Close and Personal", Frieze n°107, May 2007.

Mark Raidpere will be part of the Shift Festival at Kunstmuseum Basel in October 2008 (with: Sean Snyder, Anri Sala, Akram Zaatari, Sadie Benning, Josef Dabernig, Günter Zehetner, Lynda Benglis, Adrian Paci, Pawel Althamer, David Maljkovic). He is invited to the Espace Croisé in Roubaix for a solo show in 2009 (as part of Lille 3000).