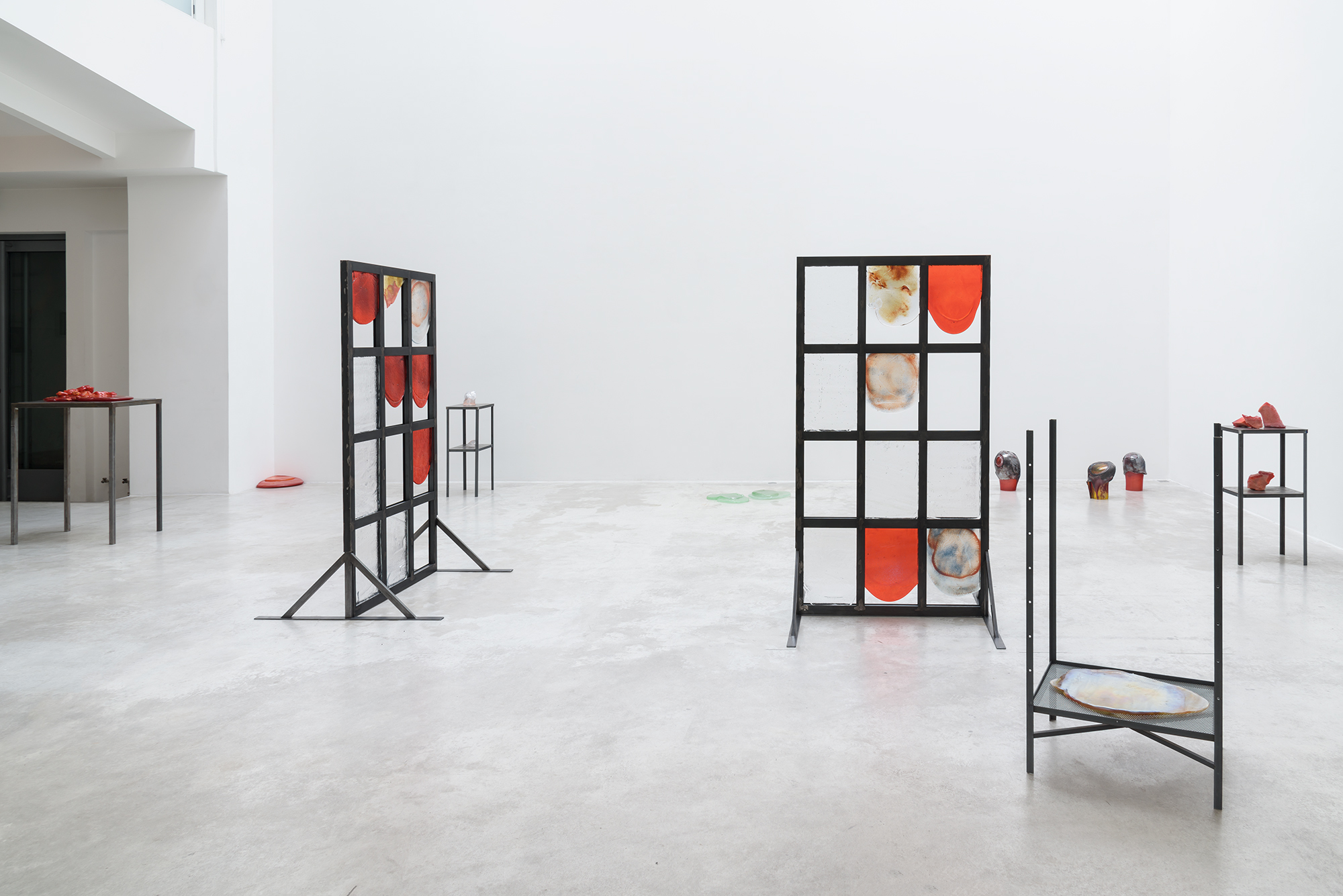 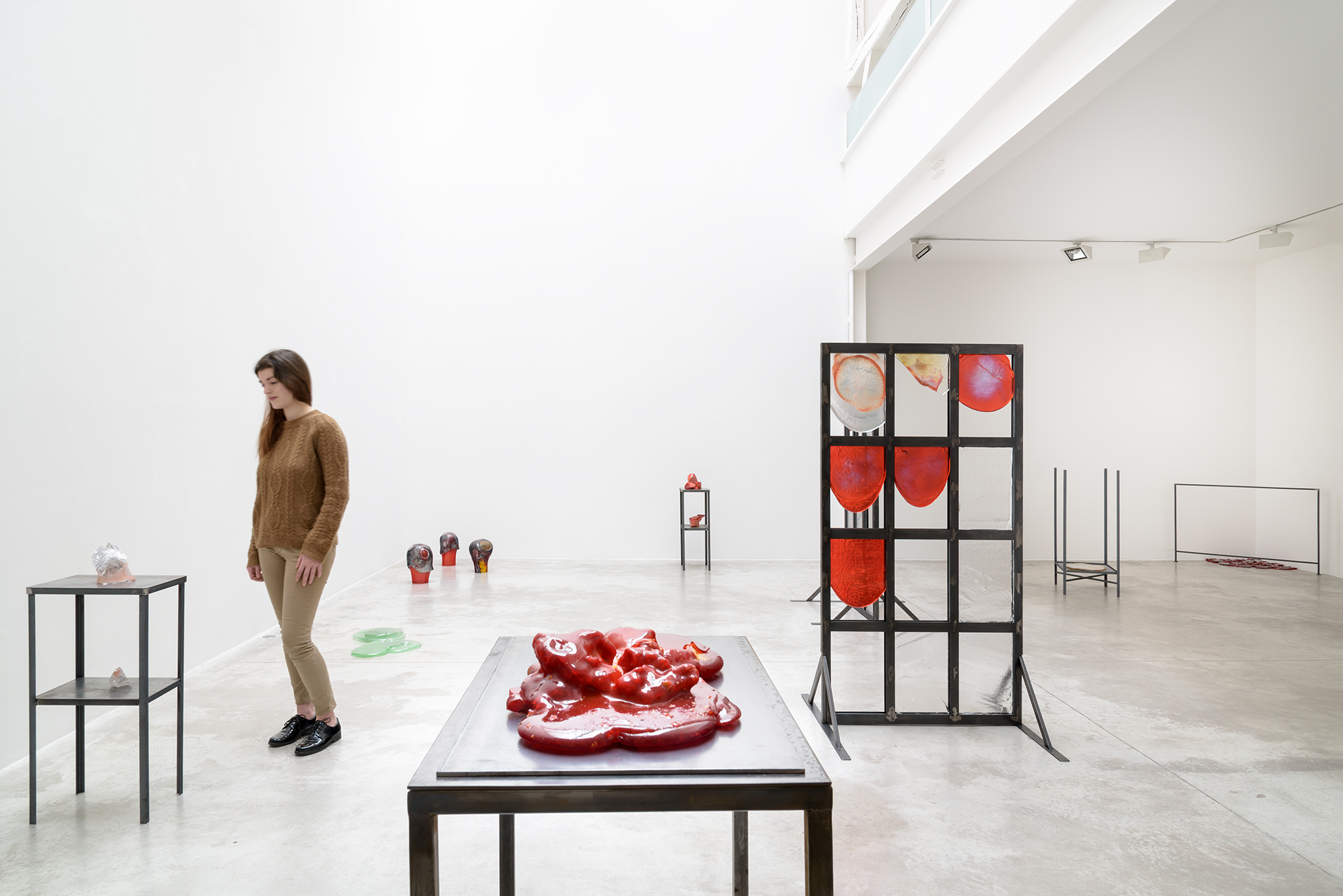 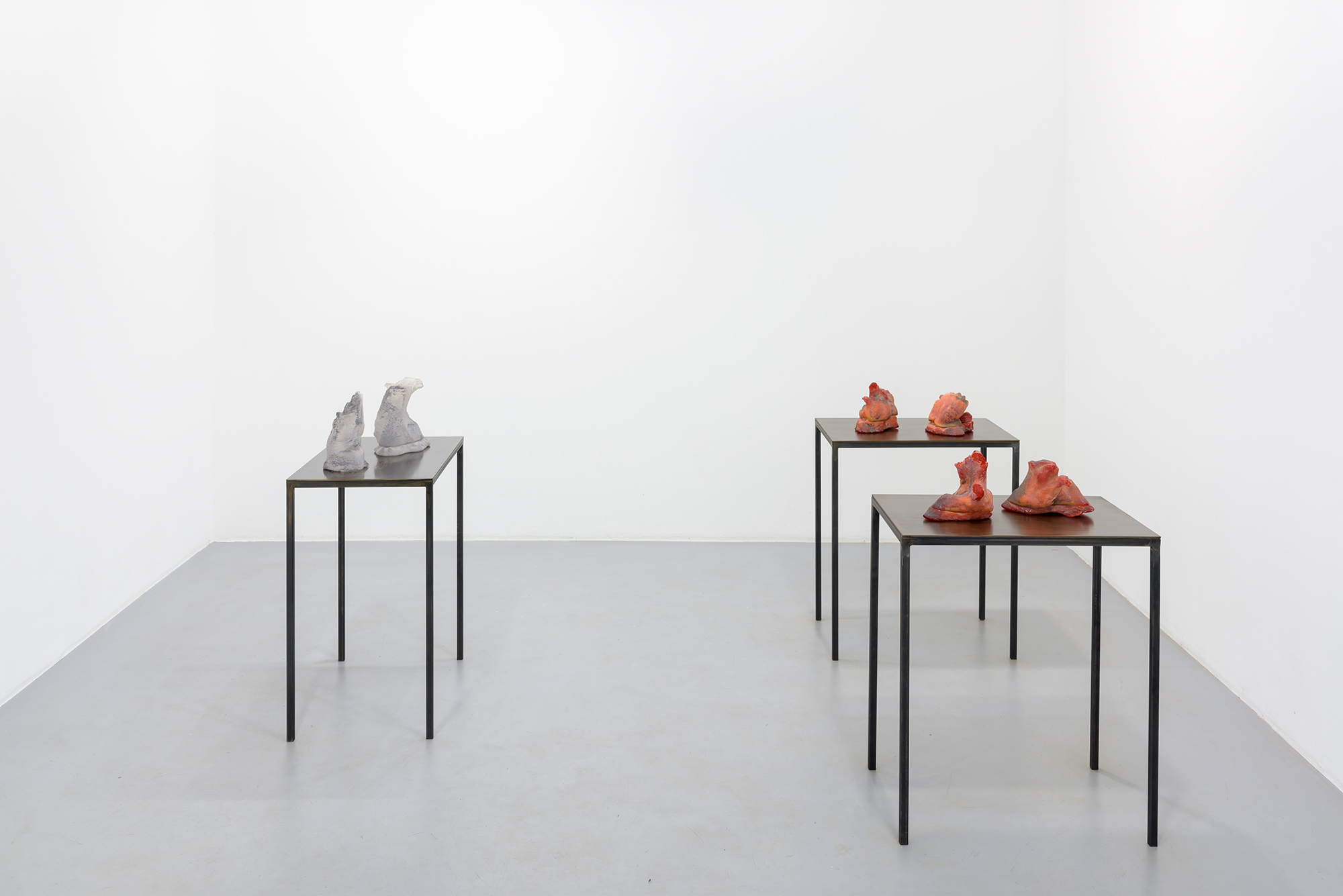 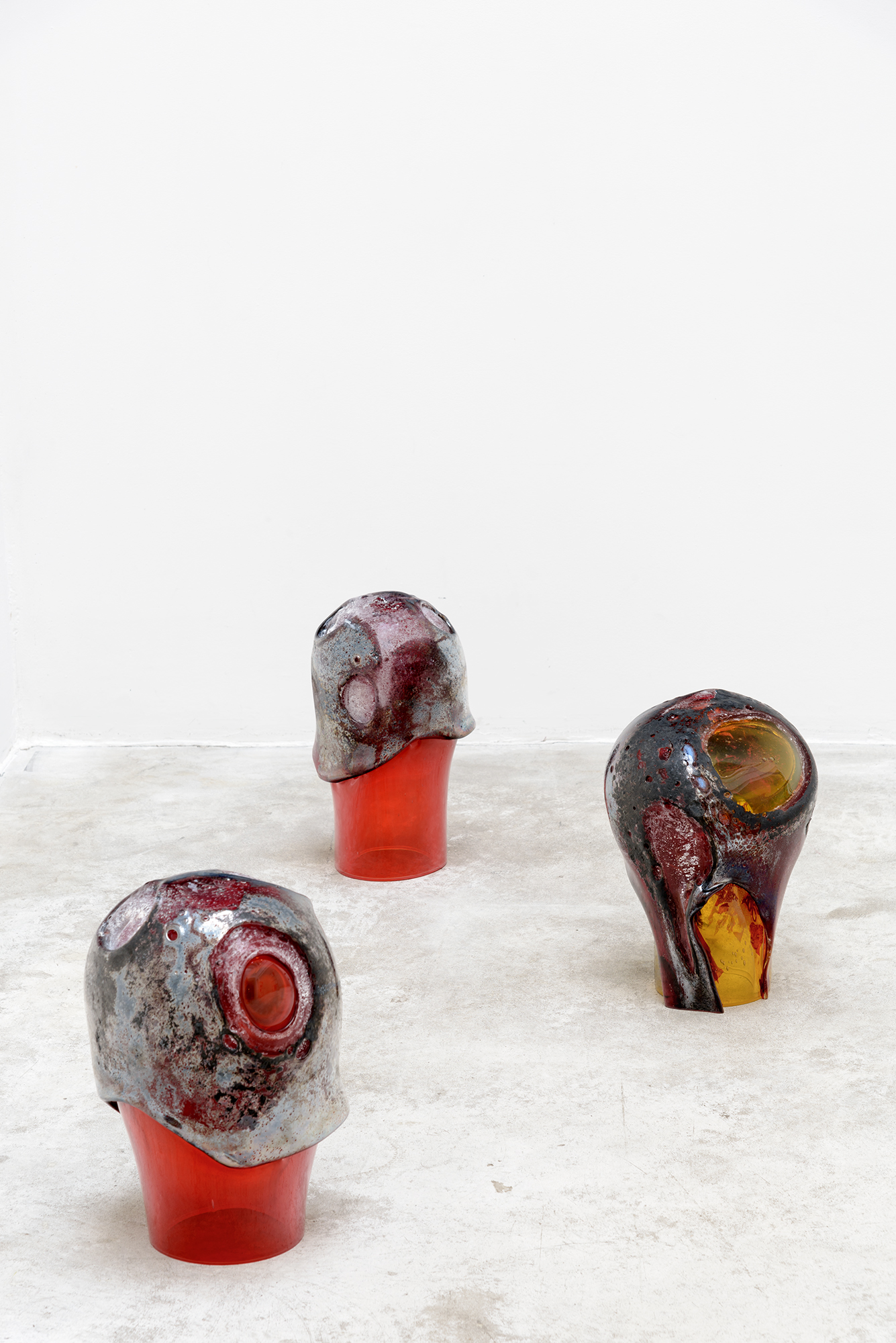 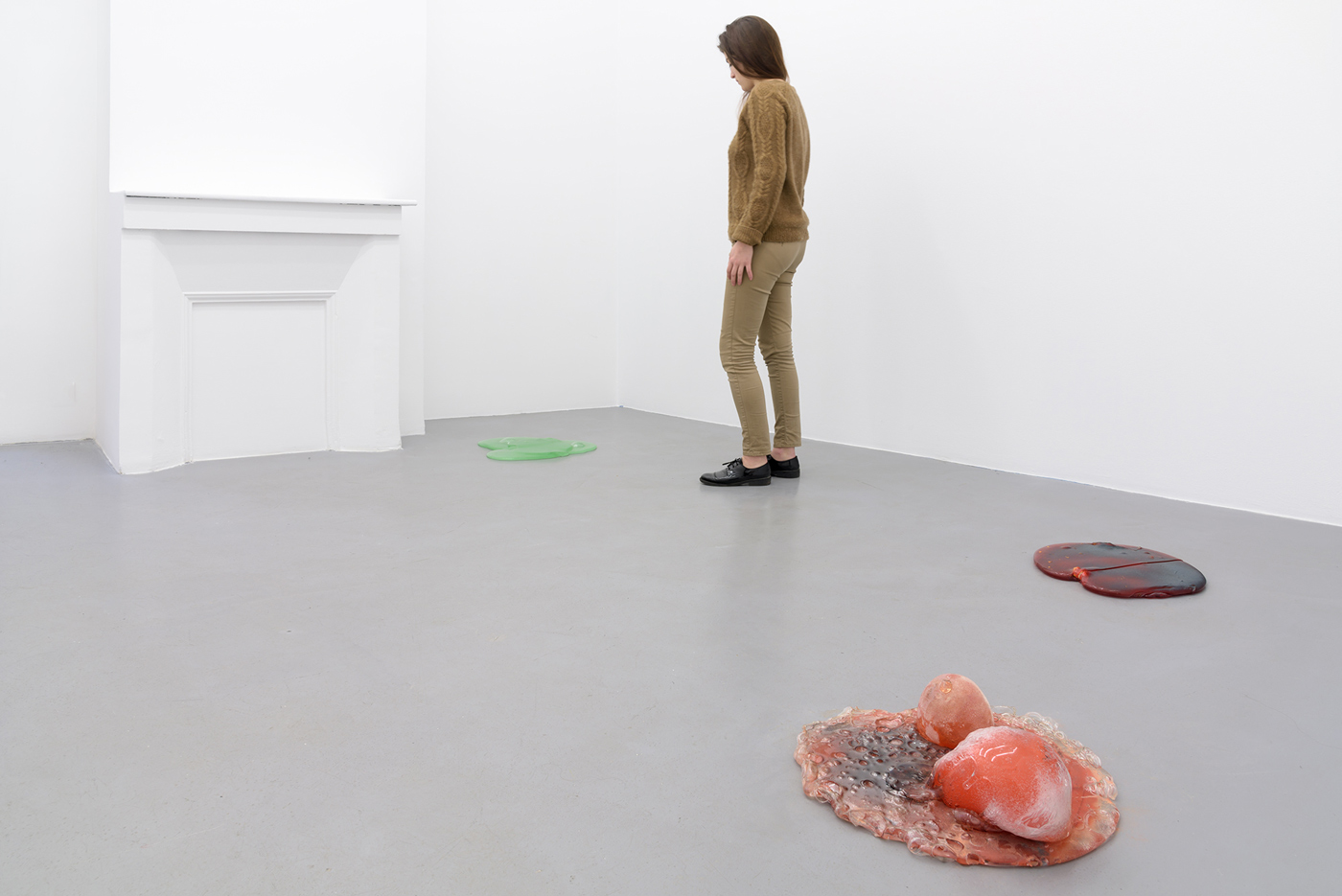 In October 2016 Jimmie Durham and Jone Kvie, who since long highly appreciate each others work and are in a fruitful exchange for many years, had with the support of Galerie Michel Rein together a residency at CIRVA in Marseille for 3 weeks.

Both seized the opportunity to work and experiment with glass in production for the first time in their oeuvre and pursued their own artistic endeavours with this material.

Both artists produced works of their own, but also created two works as a collaborative experiment. All of these works are presented here.

“ For hundreds of years physical material, matter, was divided into three categories: solid, liquid and gas. Late in the 20th century glass was added as a fourth category. Liquid, solid, gas and glass, because scientists needed the clarity. Glass is never really solid, it is in a state of flow that does not flow in our universe. One scientist described it as flowing more slowly than the universe operates.

That means there is stuff daily around us that is as though it is not of this world.

It is of this world though, starting out as ordinary sand, it is then heated until it seems soft. Sand is minerals such as quartz, which have a crystalline structure. But with high heat it loses the crystalline structure as it becomes soft.  Watching people work with glass at a furnace, I see that it never becomes liquid. That is an added, hypnotically strange, property; melted glass is not melted, does not become liquid. It can seem viscous but that is also deceptive - it is the same as it is as cold glass, only softer.

One of the nice properties of glass is that it is always pliable to some degree. It will very often break and shatter but it will 'bend' a certain amount before breaking.

What is most useful about glass is the transparency - - - hard stuff that you can see through. Even better than magic; it does what we say.  Become a window pane for a house or car, or it accepts added minerals to make the most brilliant combinations of colour and light.

Humans quite understandably, want to domesticate everything. Early on, we were too insulted by being bitten, hit or cut.  As we learned about glass the process involved learning to domesticate it, make it appropriate for every part of the parlour from window to the decanter and wine glasses we drink from and the glasses hooked on to our faces to help us read each other's poems.

When any of this glass breaks it becomes immediately against the law. And dangerous.

For me broken glass shows the true qualities of glass. It vibrates. It scares us. To encounter broken glass is like meeting a dangerous wild animal. It has a constant energy; energy that cannot fit into our world.

Working with molten glass at CIRVA in Marseille I learned that glass often breaks as it cools. We think that is because it cools too quickly or unevenly or something. But that is only descriptive, not really explaining what happens.

There is a great inner tension in glass. I guess that is because it is moving slower than the universe.

Jone Kvie's sculpture is incredibly varied because he uses any material that seems to echo a need in his brain. The individual pieces always re-interpret our perceptions of objects or phenomena in the world. But with an intellectual lightness that is similar to the spirit in which Italo Calvino wrote.

Jone and I had planned to do projects at the CIRVA glass workshop in Marseille for several years but could not free up time.

We finally did it in three beautiful weeks in October 2016. Each of us wanted to see how to return to some essentiality of glass. I wanted to show these strange qualities of both flowingness and the willingness to dangerously break.

Jone has done works also about the flow, yet always connected to volcanic action. He also made casts in wet sand using his hands to form the negative of the finished pieces. The results are properly unsettling, combining the human body with wild earth and wilder glass.”

Jone Kvie (b. 1971, Stavanger) lives and works in Malmö. His practise as a sculptor is characterized by a fascination with existential questions, and by an intention to extend the notion of art towards contemplation over the world’s being, and what it means to be human in it.