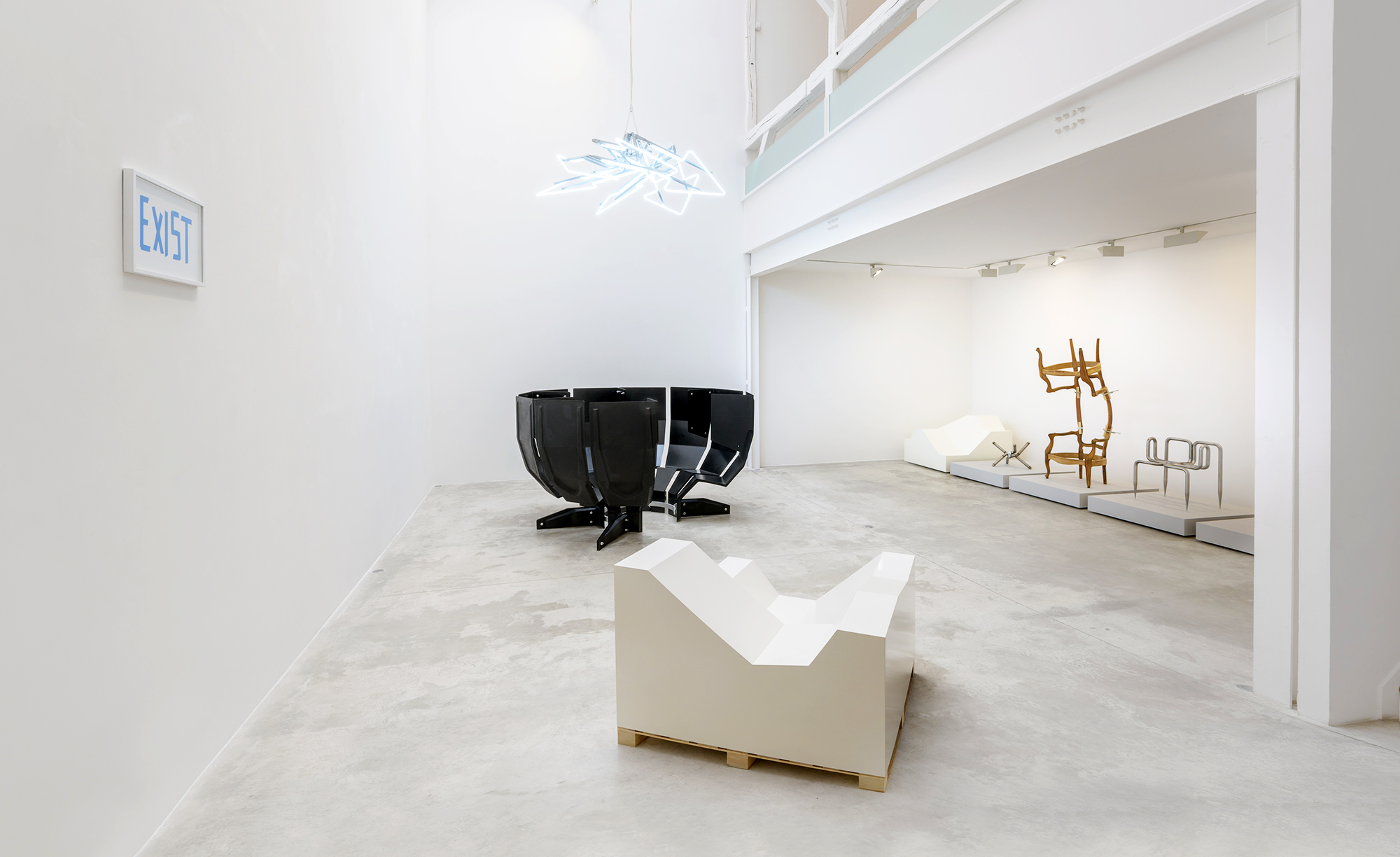 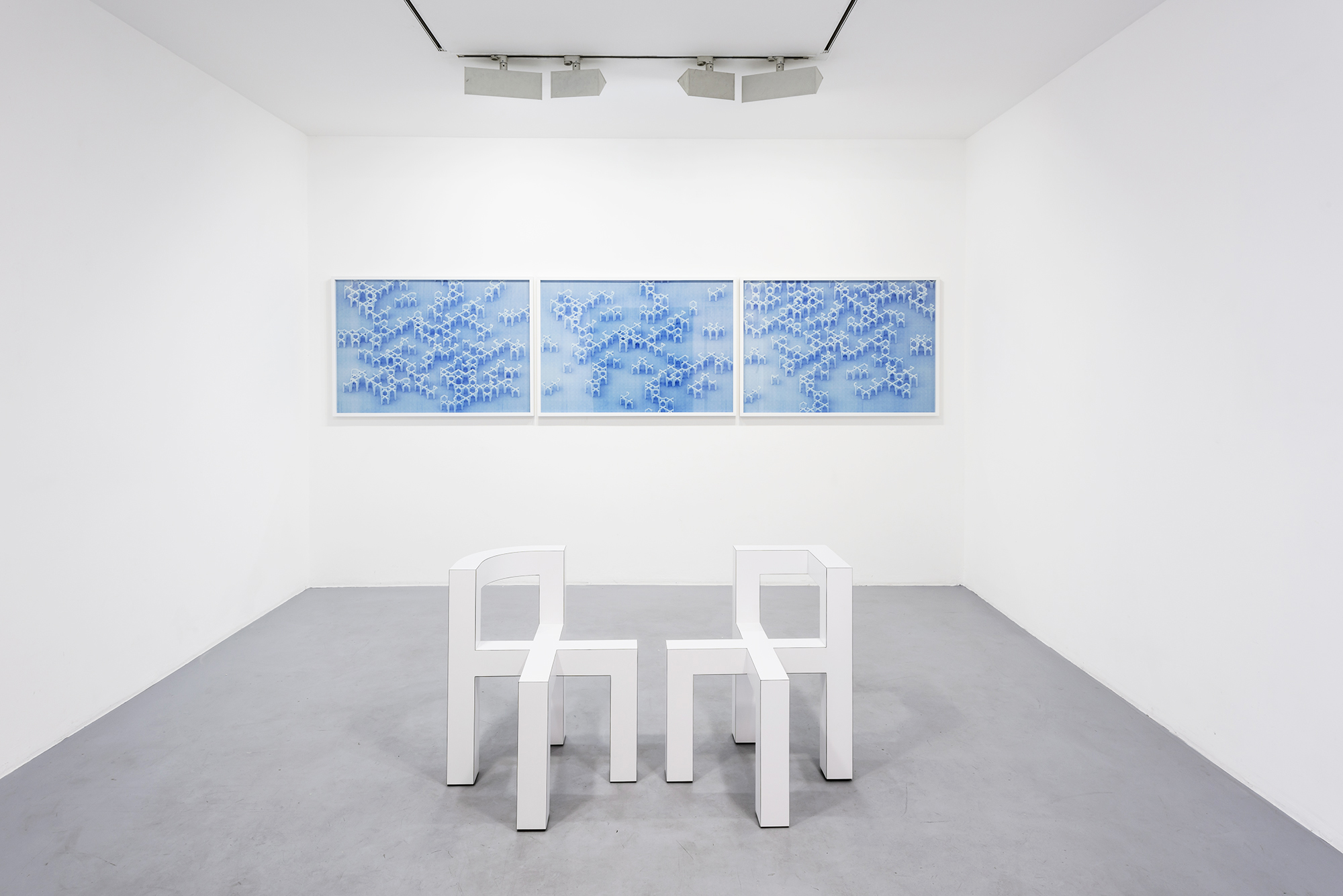 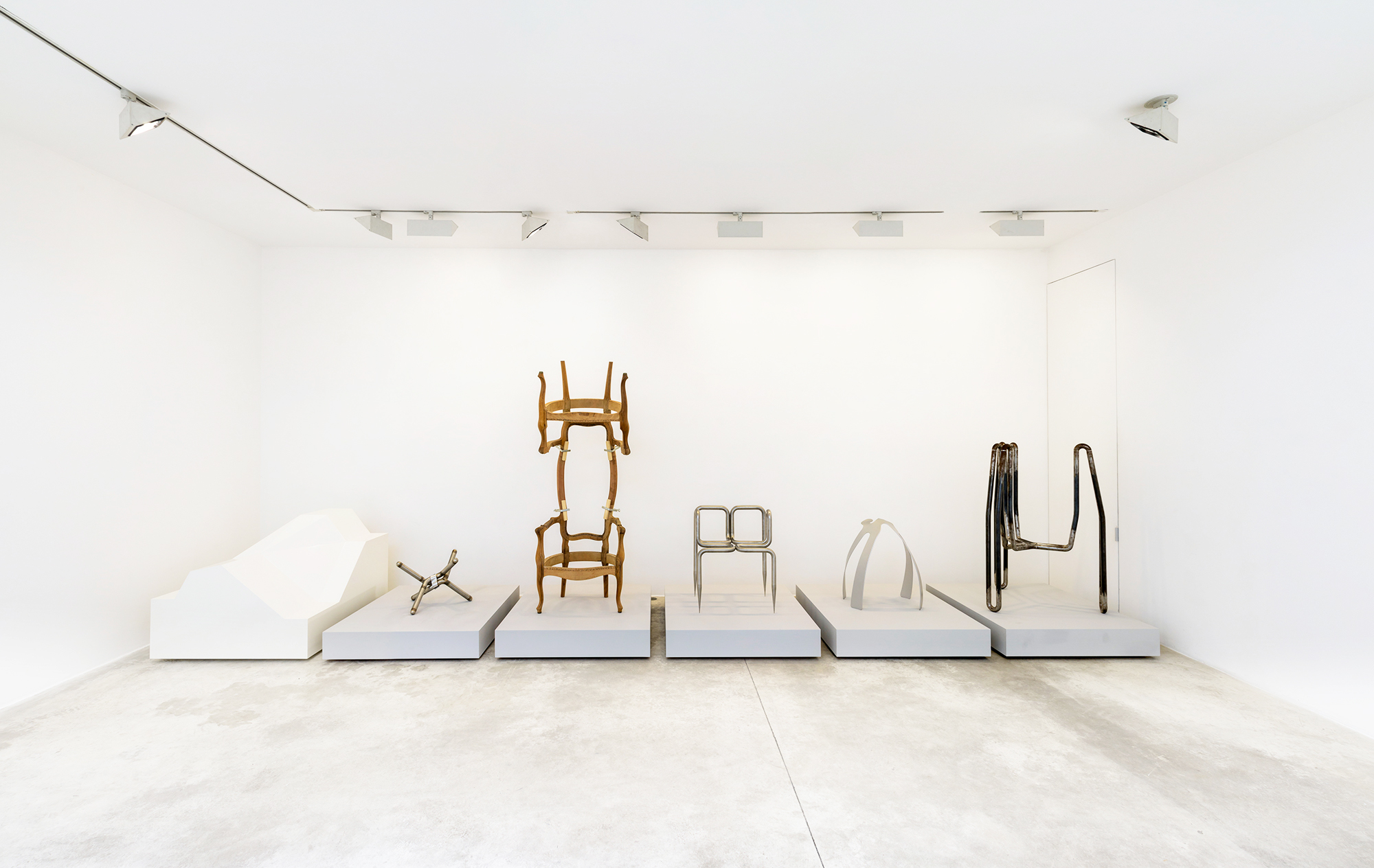 He’s sitting on the fence, one would say on the other side of the Channel. Didier Fiúza Faustino has been working for many years on the cusp of art and architecture, between space and sculpture. We know that, with this artist, the said barrier is capable of great contortions (Break, 2009; Vortex Populi, 2015) which further aggravate the discomfort of the on straddling in this way.

The theme of the exhibition MY CRAFTS is very precisely that of uncertain seating and denied commodities. Ten works made over the last sixteen years, which we have difficulty calling “chairs” as they mishandle not only our bodies but also and foremost the categories established by design theorists and other decorative art specialists (Les Liaisons dangereuses, 2008).

Ten works to be further considered as milestones in Faustino’s work, formations which appeared during his spatial work and were then integrated into this or that installation or associated with this or that building site.

A chance encounter between barbed wire and a bent tube; Love me tender (2000) opens up the series and seems to dictate to the other works his anti-ergonomic treaty with a slightly deceptive title. It is in fact often at the expense of our tendons and cervical region that the canons of the history of architecture and design have been modified, hybridized, bloated or emaciated here (Donnie Darko, 2014).

Faustino seeks to establish the degree zero of individual (Expliseat, 2005) or collective (Sympathy for the Devil, 2006) comfort. He questions Western postural conventions and thereby our addiction to armchairs. For this purpose, he reveals the possibility of a rock (Broken White Cube, 2007), and a horse (Hermaphrodite, 2010). As he is not concerned with losing oneself in the sticky heat of the upholstery, the artist never fills in the gaps. That is the body’s role (Temps sauvages et incertains, 2007). Often, mere concrete reinforcing rods and steel sheets suffice. The object, being reduced to its most simple structure in this way becomes both a territorial marker and an observation post. Its calculated, deliberate instability puts the user at risk and consequently stimulates his attention.

The last born in the series are multiplied; a couple of seats (Delete Yourself, 2016) design infinite combinatory landscapes, whilst giving knowing reverential winks to the work of Sol Lewitt and Superstudio. Polarised like the two wings of the Uncut House (2010), almost a genre in themselves, they are intended to be, as paradoxically as is possible, as massive as they are puny, simultaneously structural and monolithic. The angular one is an atom of space, a terminal giving us the origin of the three Cartesian coordinates. The curved back of the other one provokes disorder in the system. He doesn’t care for templates and cuts on the crossbar. Faustino himself (Nowhere Somewhere, 2013) makes his own – truant – way through the rigorous land registry of disciplinary fields.