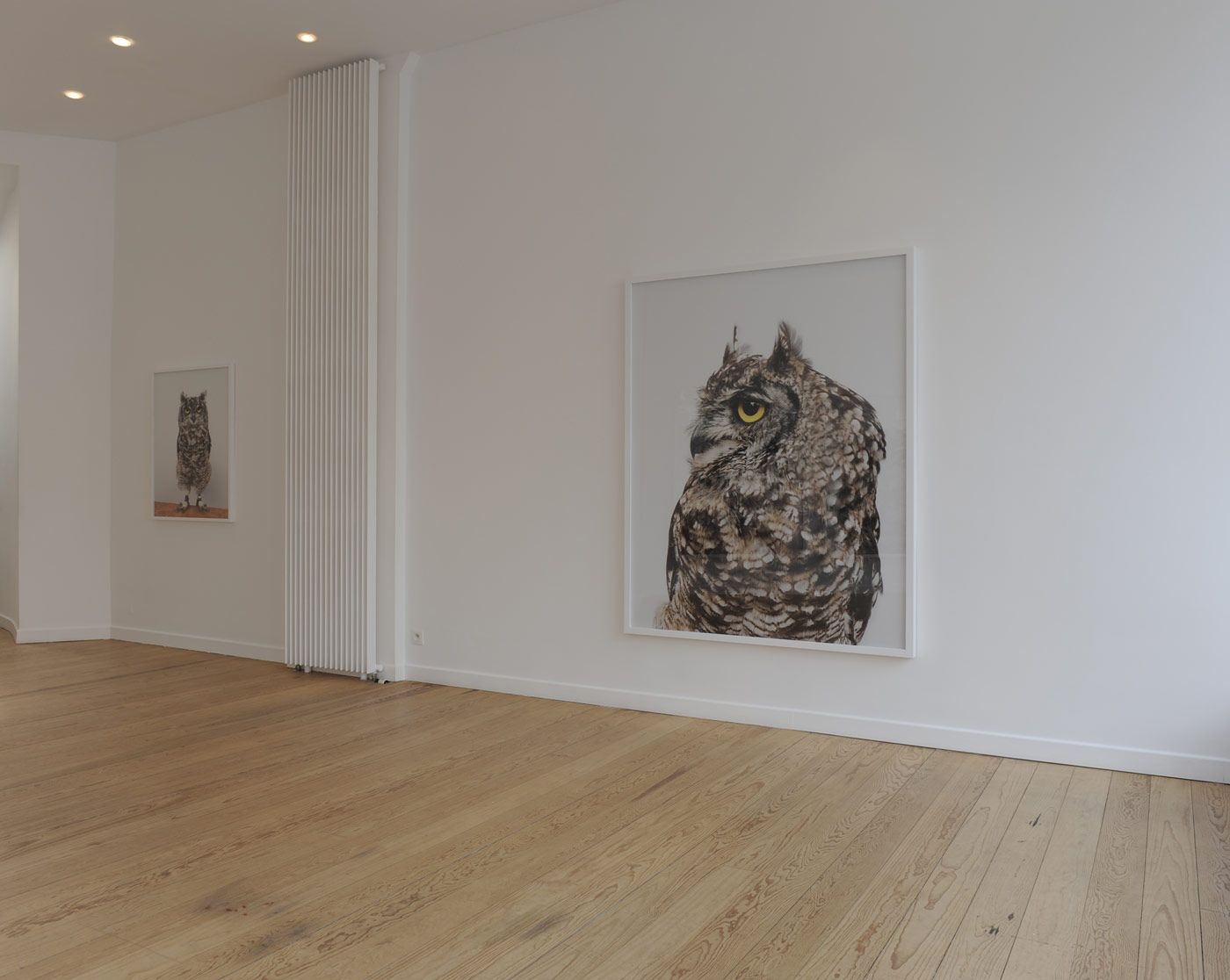 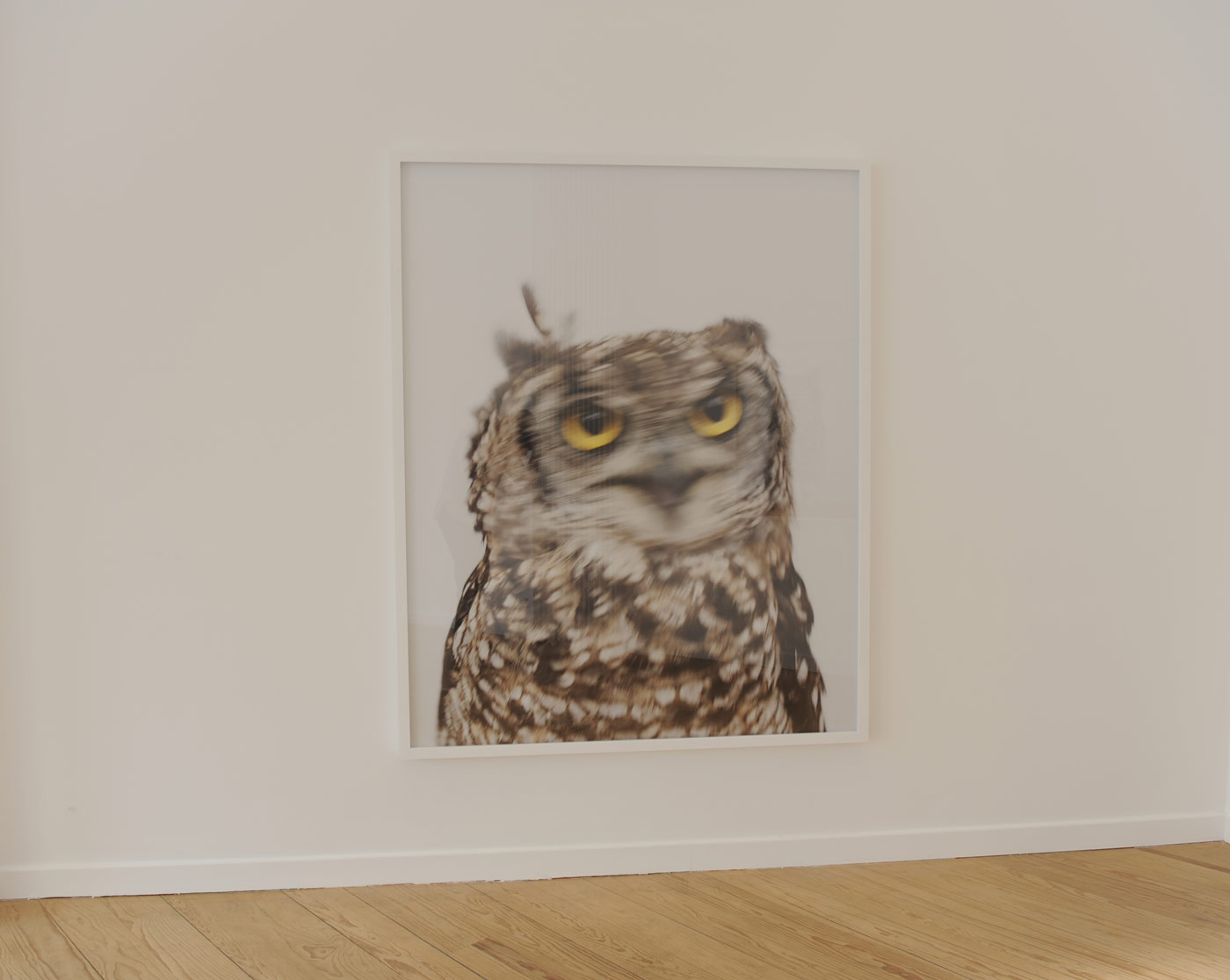 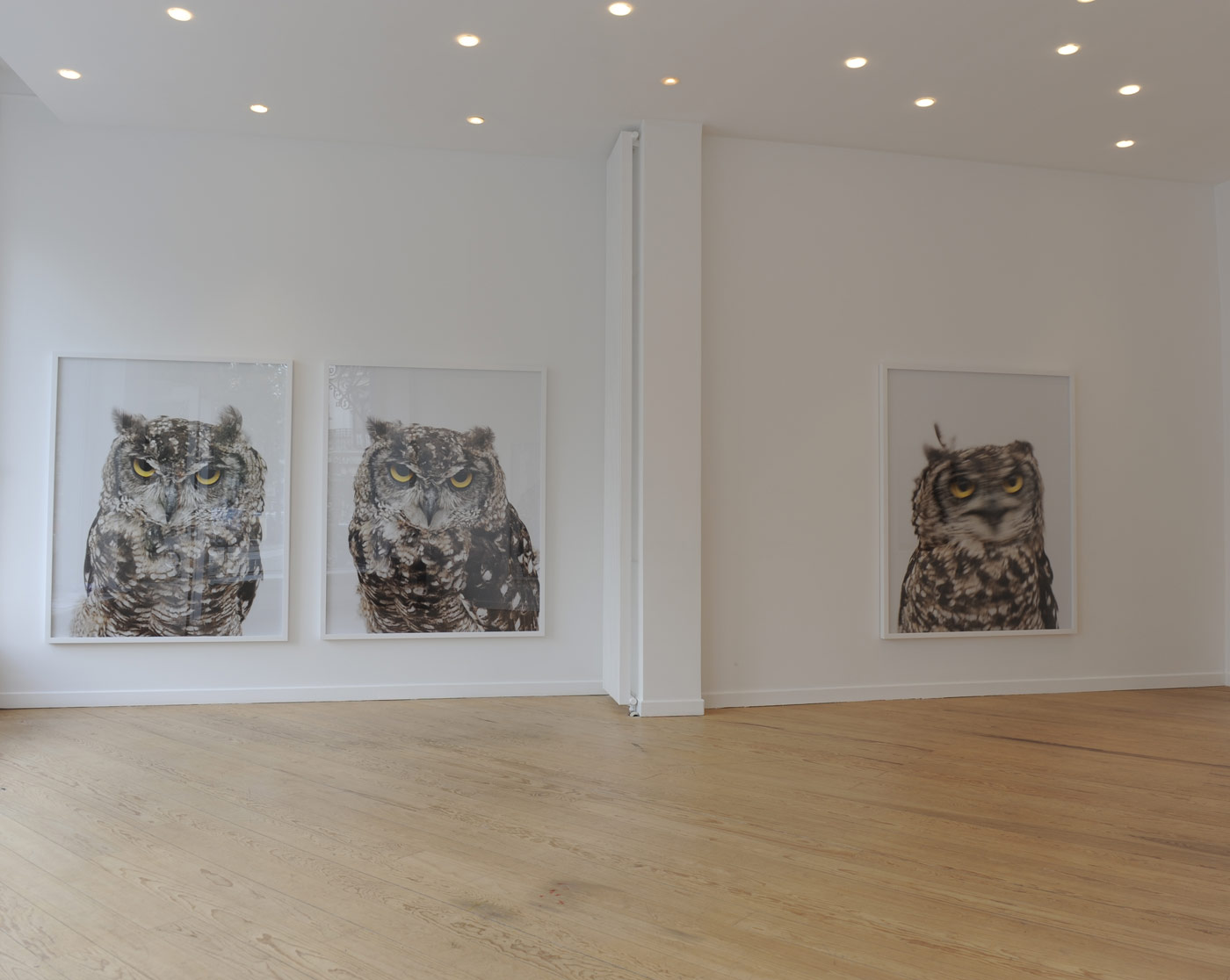 An owl is looking at us with a critical mien, distanced or even a little amused. It’s the eyes, sitting on a level facial plane, that distinguish the owl from other birds, giving it an almost anthropomorphic air. In terms of looks, that special physical design makes it man’s equal partner. If the owl, myopic during daytime, is indeed focussing something visible or simply reacting to noises made by the camera, we do not know. The ambiguity turns the owl’s stare into a metaphor of  how we look at, and assume to understand, photographs. This is an owl with message: Seeing and recognising are two different things.

For  thousands of years, the owl has embodied wisdom and inscrutability. As such, it was described by Aristotle and the elder Pliny, and depicted in heraldics and numismatics. But, chasing it’s prey at nighttime, the owl remained also scary to humans. It was attributed demonic qualities in myth and folk tales. Looking at the owl today, our perception still echoes that ambiguity of sageness and mystery.

In his series of Portos portraits, Franck Christen invites us to revisit this traditional perception. The pictures are the result of an intensive dialogue between the photographer and his animal counterpart, of a multi-faceted relationship which even seems to include playful and humerous moments. They are classic three-quarter or full renditions of the subject against a completely neutral backdrop. There is no context, no environment, no defined surrounding, not even the cast of a shadow to divert from the interaction with the photographer.  This „neutral“ presentation, the absence of time/location-coordinates commit the whole picture to the bird’s physical presence and physiognomy. The flat face and the torso together compose an almost geometrical beauty. What led modernists like Picasso, Max Ernst, Hans Arp and others to an aesthetic reduction is here used for photographic composition, while at the same time preserving the richness of nature’s original form. The lively plumage, the piercing look are amalgamated into portraits which are simultaneously highly individual and timeless. What we see is this one bird Portos, and at the same time an incarnation of the whole species. It is present in all its physical splendour but remote from all animal conditionality, elevated to pure aesthetic beauty.

The mysticism captured in these photographs is fed by a specific sensibility for interior qualities behind the uppermost layer of reality. Franck Christen, born 1971 in Mulhouse in French Alsatia, is gifted with an unfailing sense not just of the aesthetic but also the spiritual properties of his subjects and a full set of  tools to visualize them in this most technical form of art, photography. He has developed from these talents a unique pictorial language applied to a wide variety of subject matter, comprising portraits of human and animal beings, landscape, urban scenes. Never content with the obvious, always out to probe the essential qualities of any given subject, he will invariably arrive at a result combining elegance, grace and a measure of respectful distance. Leaving to others the heated discussions on photography’s ability to render the truth, he refuses to let his own work become a battlefield for such controversies. Instead, his pictures are a striking example of how much truth can be transported by photographs before the controversy even begins.