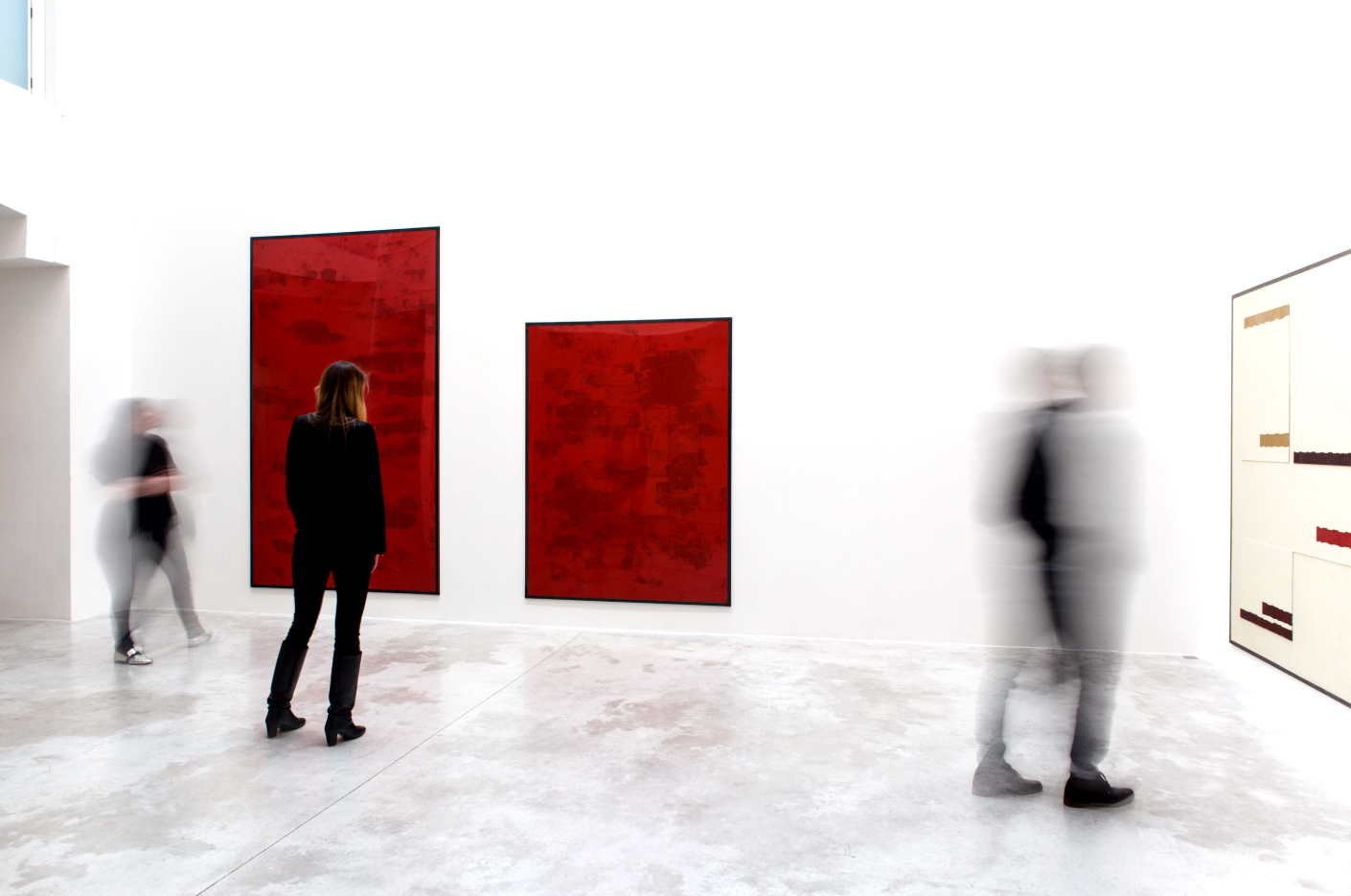 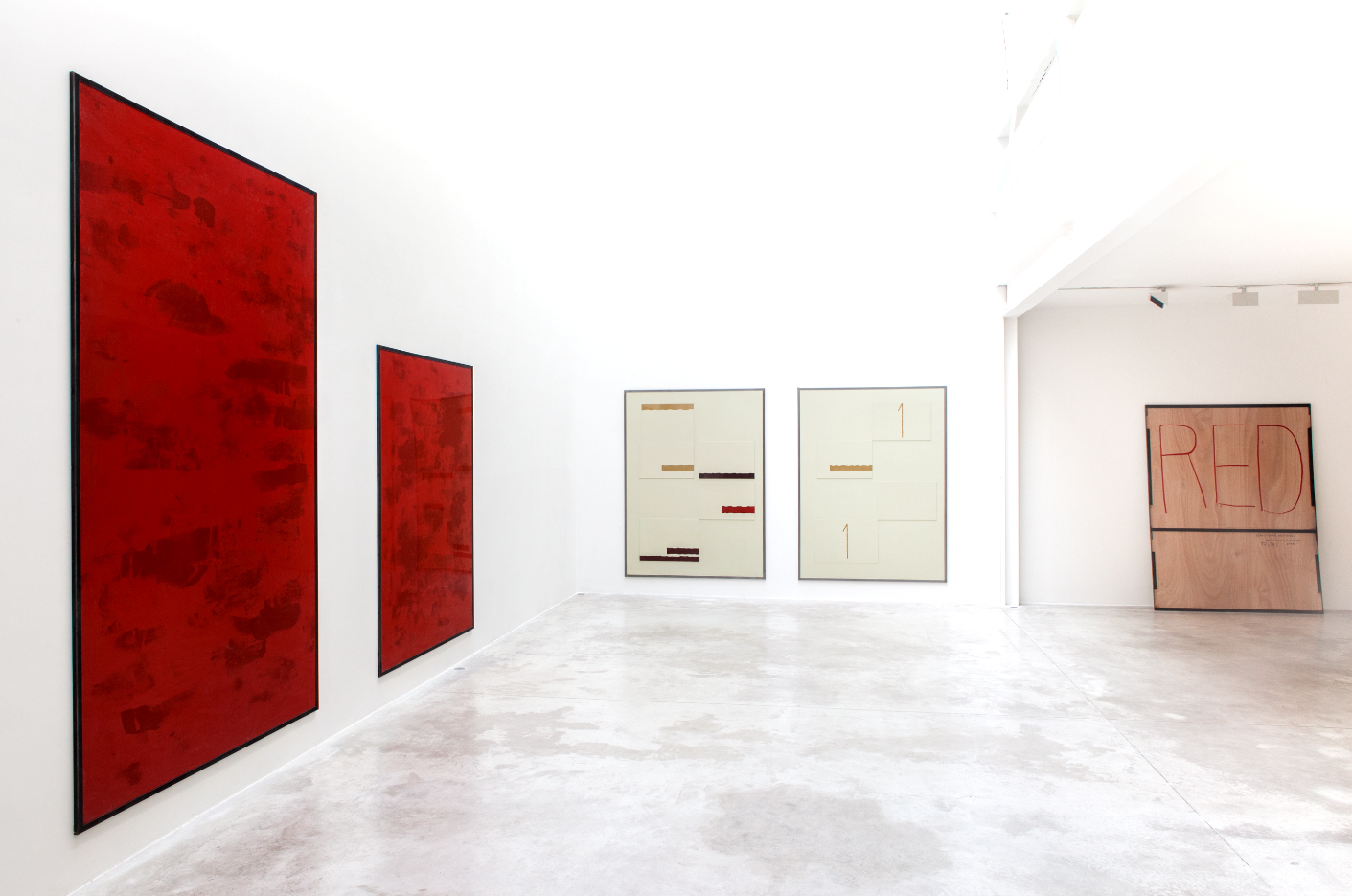 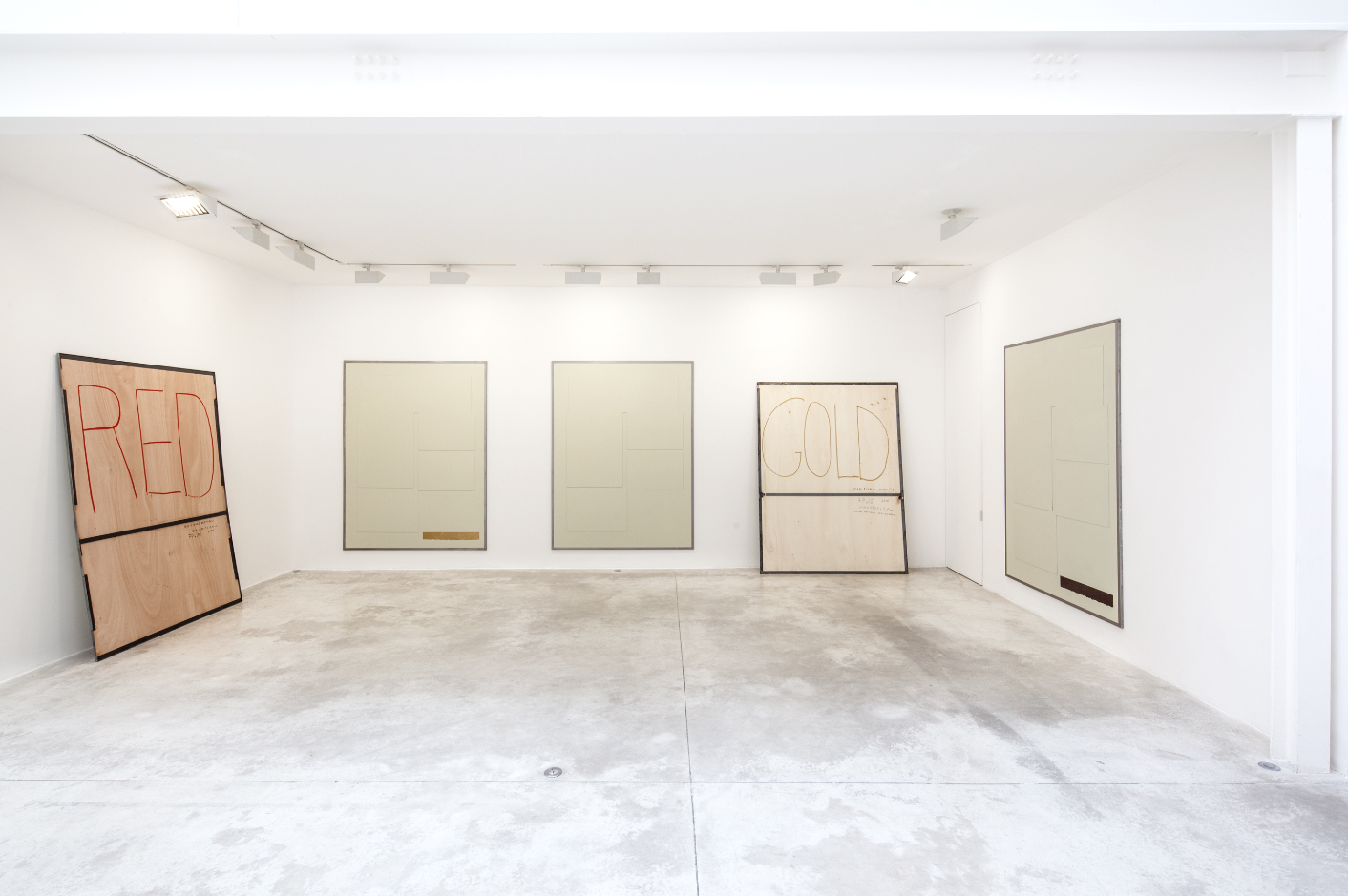 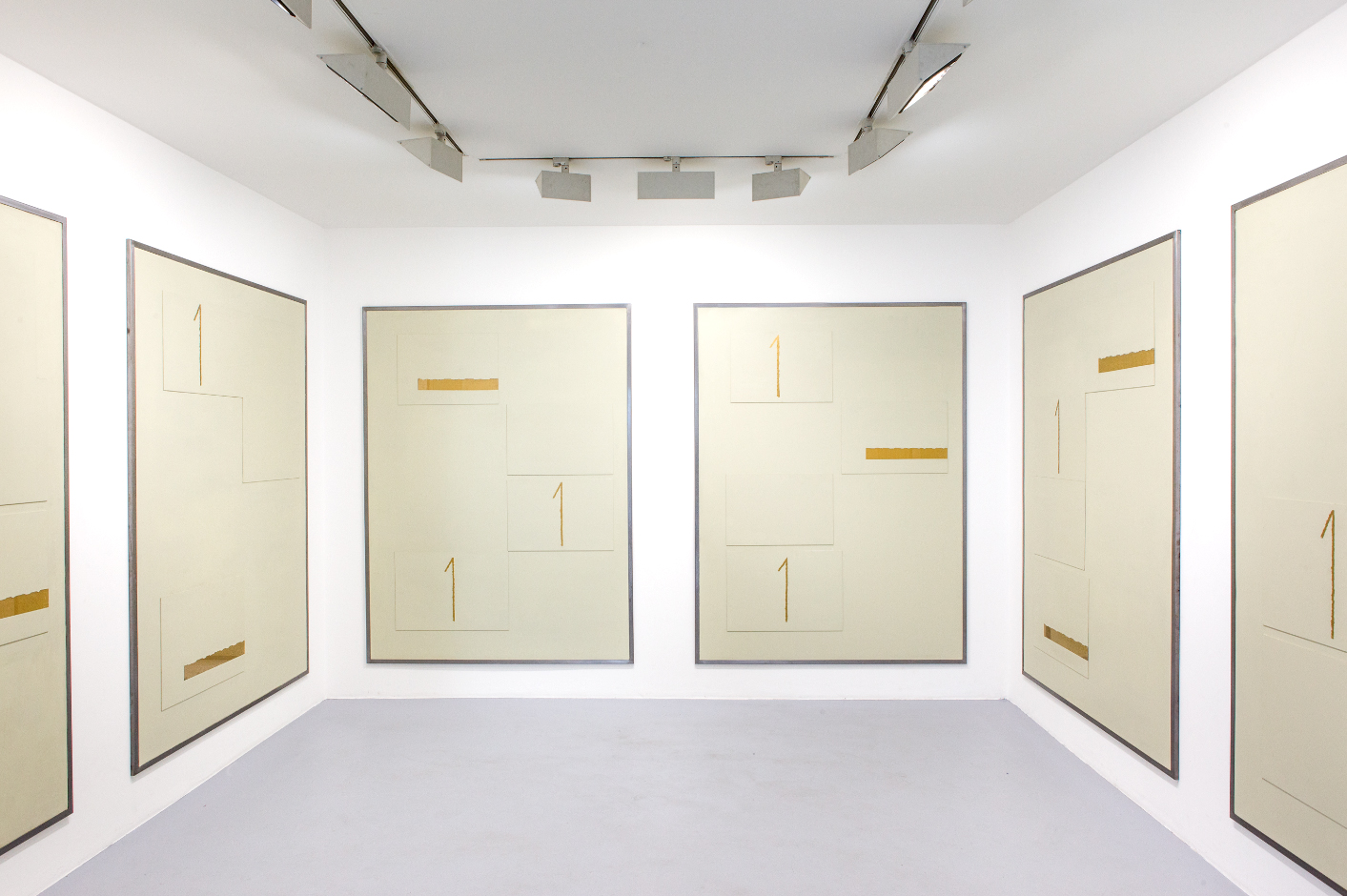 Discovering a Jean-Pierre Bertrand exhibition means entering a quasi liturgical space where red and gold mix with honey, and also glimpsing a field of experimentation made from some elements of measurement, from a collection of relationships to the body and to colour like matter and energy. A builder’s art with an idea of man and how he may be worked by the mind and the verb. We can also identify a type of Shamanism, rectified by a mondrian rigor.

Since the Shems, which appeared in his repertoire around ten years ago, the artist has pursued his path, reducing means and progressively replacing colour by elementary equations. In these new works, like in the Shems, big vertical panes of Plexiglas are made opaque through applying parchment coloured paint. On these panes rectangular tiles of the same material and colour are laid and arranged. Almost perfectly vertically aligned and united by a corner or a widthways gap, these tiles are drawn to and beckon each other. The regrouping of these large works running from wall to wall suggests jumping, friendly arrangements (shifting, interweaving) between different panes of Plexiglas. They are neither exhibited in a logic of substitution, nor in an attempt to create diptychs but rather a vision of the same reality in another light.

To the coloured bands found in the lower part of the panes of Plexiglas the number 1 is added for the first time, drawn in small dashes, almost dots, by finger. This number, the first one that came to mind, breaks the silence in a certain way, and underlines the importance given to measurement. Despite the gold, this indexation format marking is also a handcrafted gesture. As for seeing extremely stylised and fragile silhouettes in it? Why not. That would only reinforce the intense presence of the body supported by blood-coloured vertical forms and by the curiously greenish parchment colour which resembles that of a corpse. It is, may we say, a white that is familiar to us, infinitely more familiar than the suprematist space or than Manzoni’s hygienist achromia.

The grouping of the 1s in a tight space produces a force field, which is counterbalanced by the big reds, colour-matter, pure energy, which welcome us in the main exhibition space. The isolated 1 that we then find naturally causes us to turn around to recognise its singularity and measure its detachment from the compact group. Turn around, learn to look in all directions, to perceive how the works of Jean-Pierre Bertrand modulate and shape the space. Turning is notably one of the gestures of this exhibition. An artist’s and a card player’s gesture, as cards are brought to mind in Red and Gold, two large format prints (laid) on the floor and (we believe) facing the wall. Two works which are either absent or in waiting and whose layout, other than energising and restarting the presentation (in so far as it can be seen as a card trick), also highlights its impermanence. Gold and red, these words, written with the tube, replying to the numbers marked with the finger. One can say of them that everything is left to play for, or on the contrary that the exhibition is sealed by their layout in the form of headstones. Jean-Pierre Bertrand’s art, in its material simplicity shows a tremendous force of evocation, a way to make minds meet and to open a field of vision ranging from parietal art to the conceptual. It’s neither another variation on the ultimate tableau or on the mourning of the lost paradigm but a space where we are made attentive and receptive to painting like survival.