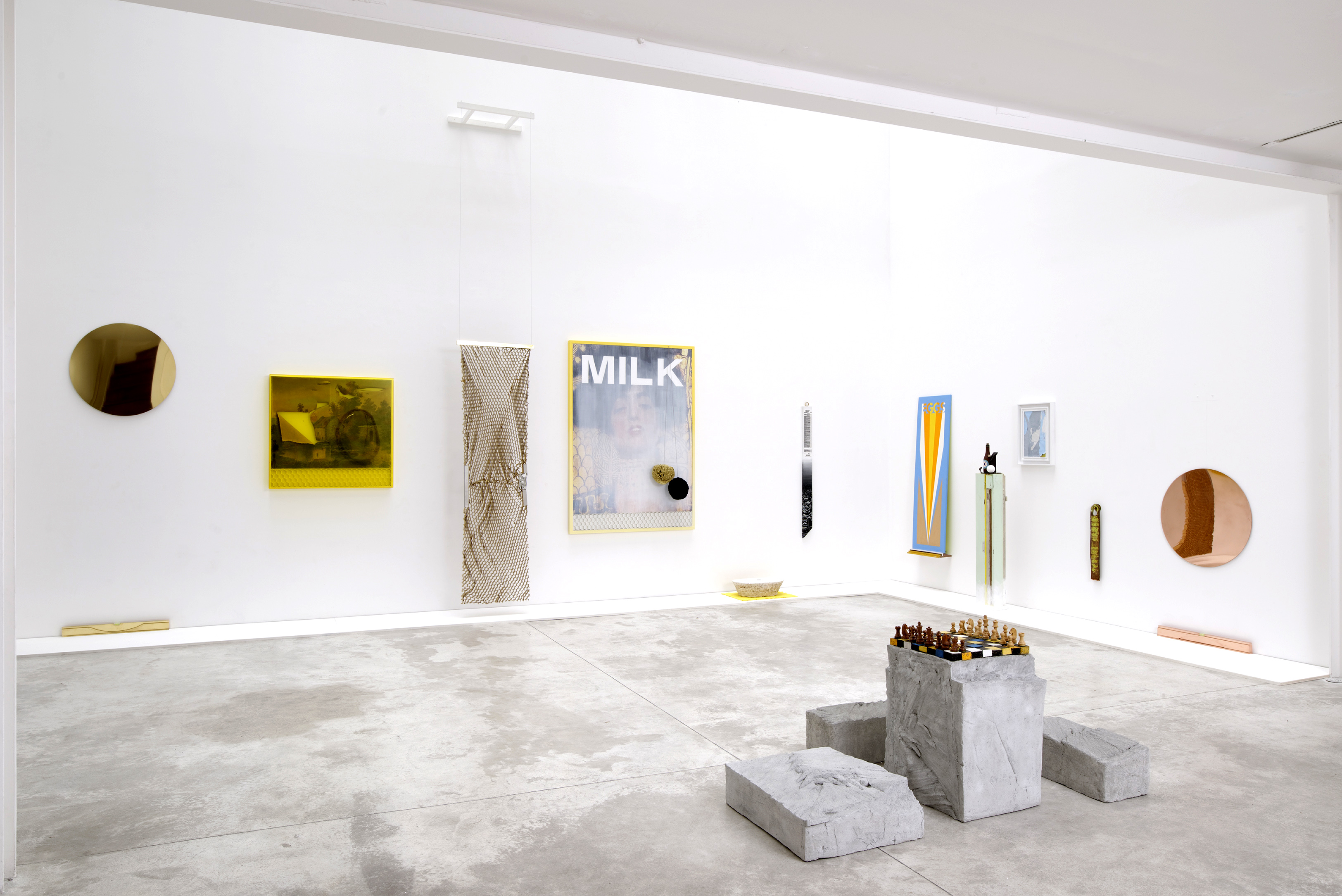 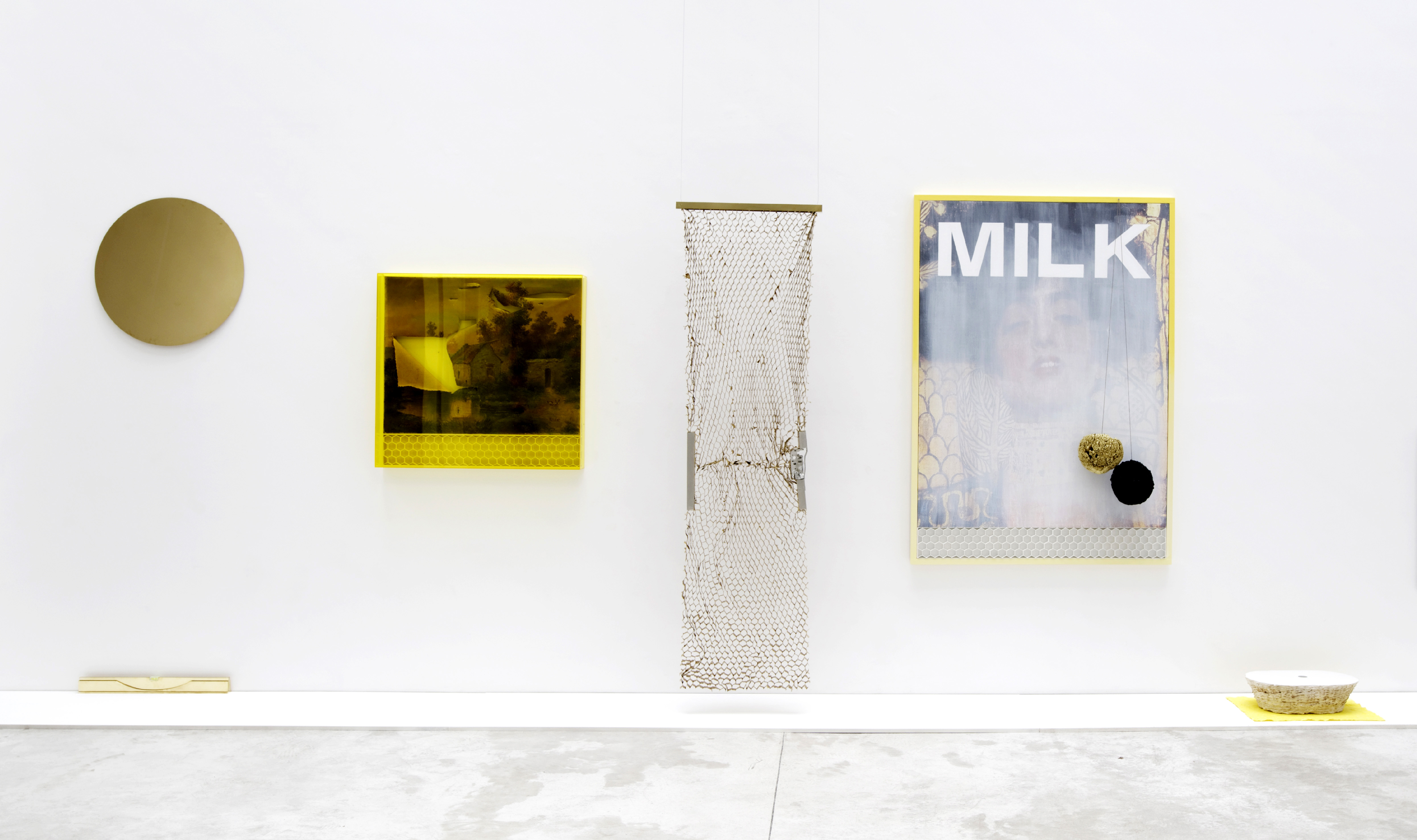 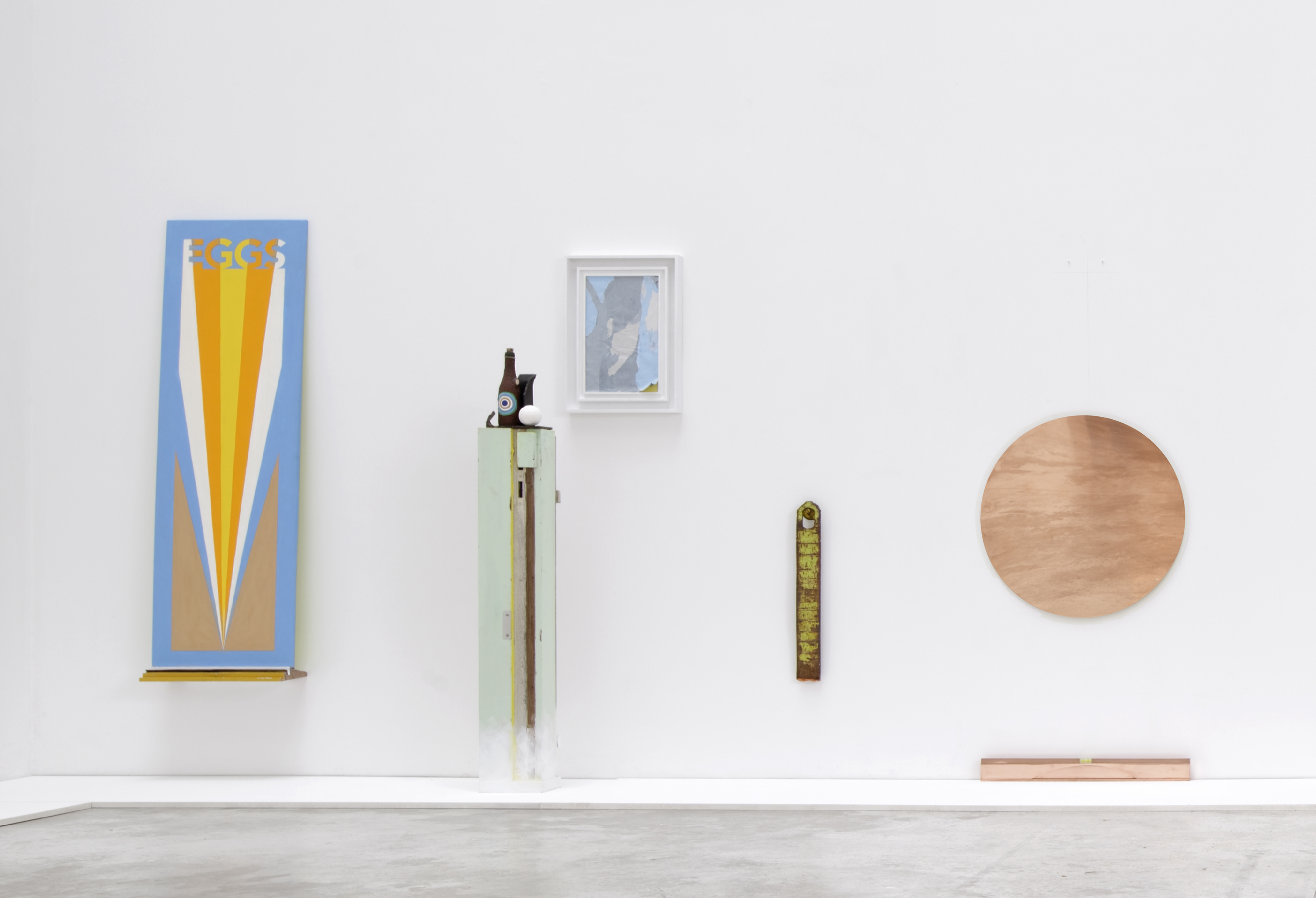 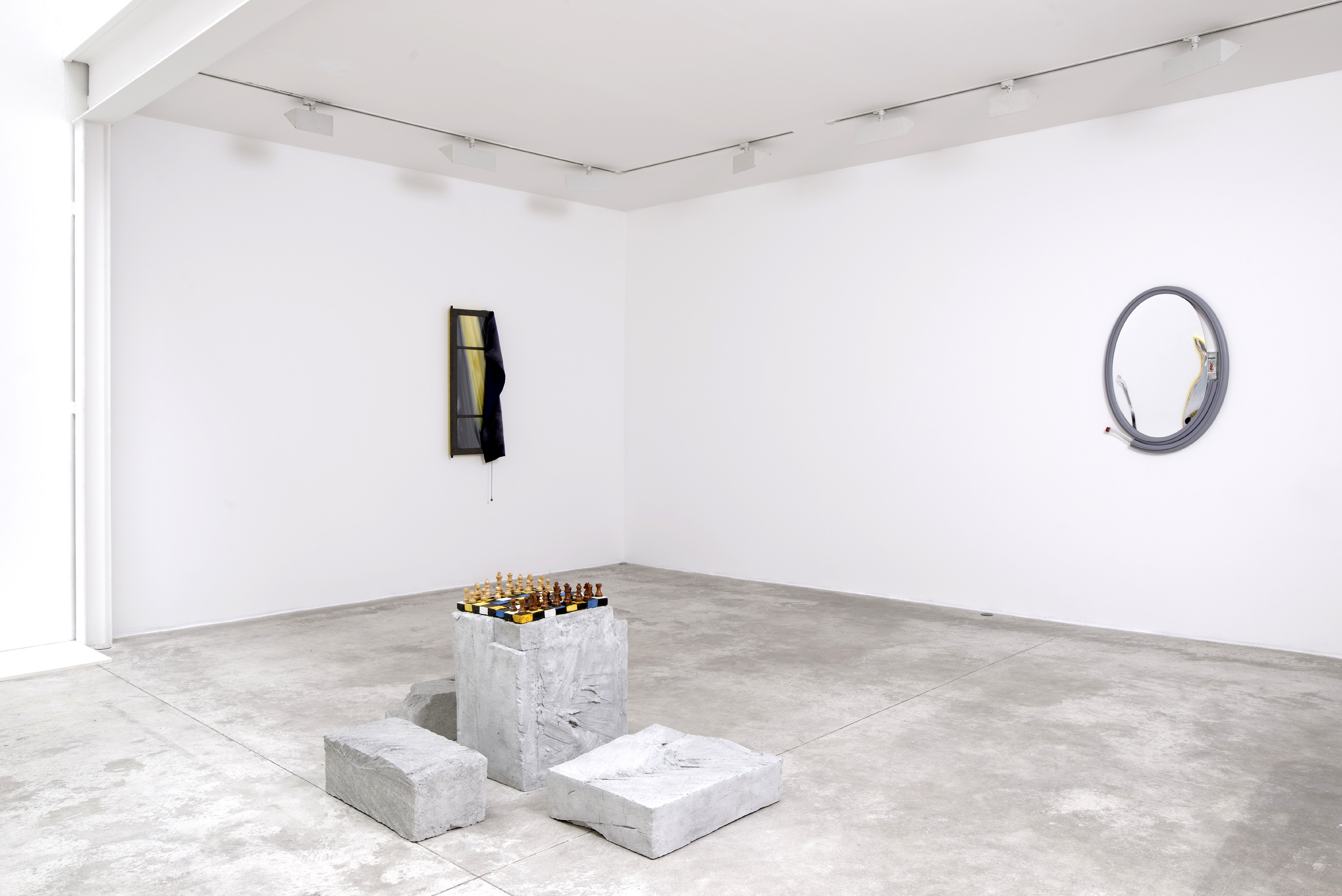 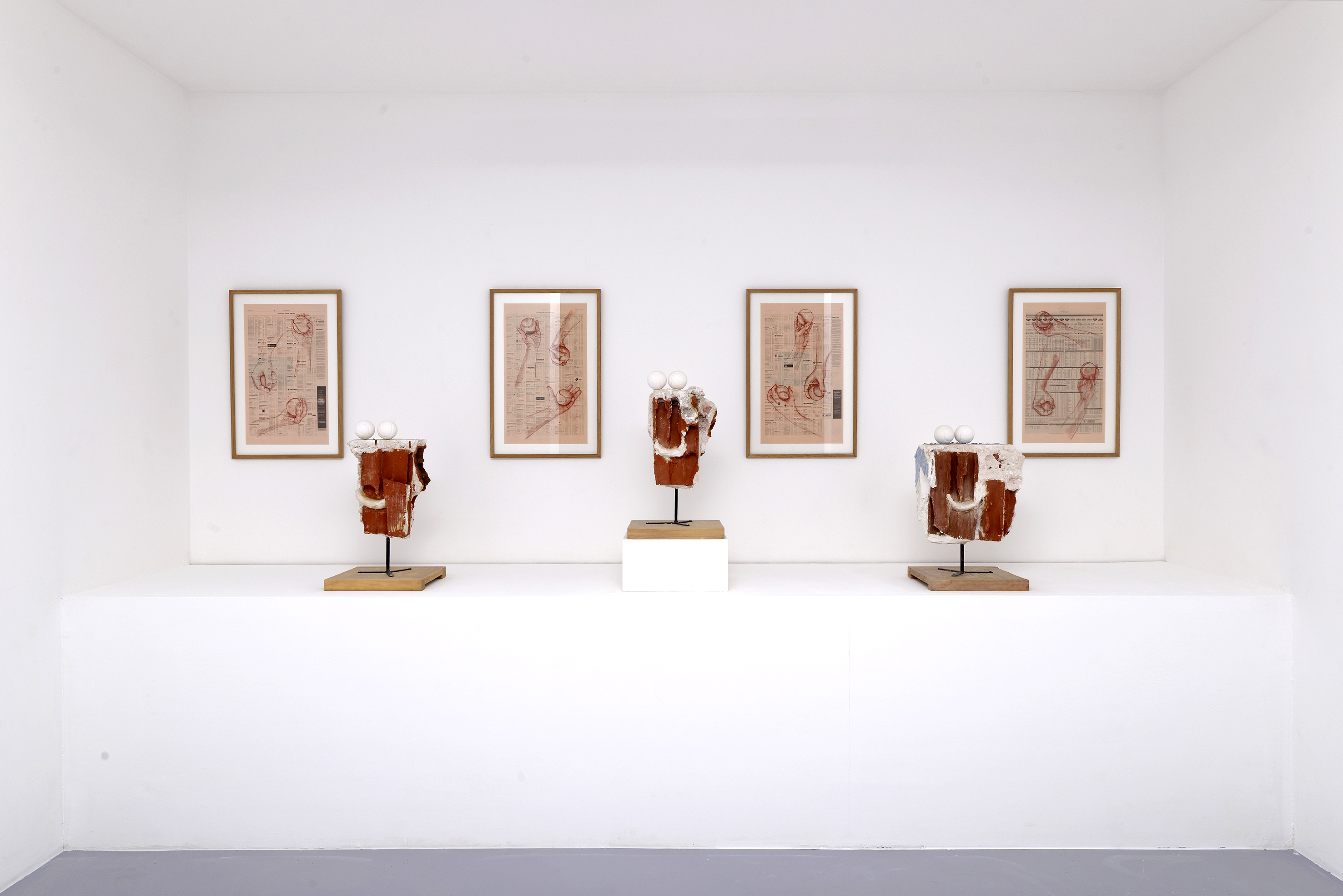 Michel Rein gallery is pleased to welcome Franck Scurti’s fourth solo exhibition after My Creative Method (2012), No Snow No Show (2011) in Paris and Still Life (2013) in Brussels.

Since 2010, I set up my workshop in a street of Paris’ 13th district, la rue Dunois (Dunois Street), where I find my main source of inspiration. It’s right here, in this street that I find these obsolete objects or these materials stripped of value, choosing them because they show a certain potential then I redefine them, as rebus for which it is necessary to decode the socio-historical meaning. In t he first room, t he collect ion of sculpt ures unit ed under t he t it le “Blockheads” appears at first sight t o be fragments of brick walls, but on looking closer certain details seem little by little to form a face.

On the wall, slightly in the background, anatomical sketches are drawn on the financial pages of newspapers. If the stockbroker’s model of the artwork’s value now substitutes the traditional merchant’s model and academic norms, these simple volumes of bricks, displaying a sarcastic smile, take on an unarguable reality when faced with the predominance of our subjective judgements. The collection entitled “The Yellow Suite” follows the outlines that have structured my work over the past few years. In keeping with “The Brown Concept”» and “Nouvelles Lumières de Nulle Part” (“New Lights from Nowhere”) displayed at the Mamco last year in Geneva1, “The Yellow Suite” consists of a dozen works, all of which are created independently and displayed according to a linear museum layout. The rising sun is the sign that everything is starting anew. Solar discs, perfect circles, coins are to be found throughout my work, like a leitmotiv or a brand mark. In “Salaire Solaire” (“Solar Salary”) the two moments at the rising and setting of the sun limit a period in time which is that of a day. Placed at the beginning and the end of the series, “Salaire Solaire” opens the tale of “Yellow Landscape”, an oil painting, which was found lacerated but has been reappraised by its framing. “Yellow Landscape” creates the fictional unity of place in this narration, whose meaning is not given. Further on lies “Judith and the Colors Catchers”, a recovered advertising poster whose colours seem to have been absorbed. The poster shows a woman’s face, adding a novelistic character to this laconic series where each work metamorphoses into a narrative sequence fed by the political, economic and scientific data that punctuate our daily lives. As a counterpoint to this museum series, many pieces come to define recurrent themes in my work. In this way “You Cannot Loose If You Don’t Play” plays on the analogy of our paths as pedestrians and a game of chess, or “Miracle on Dunois Street” on the miraculous and unexpected find on a street corner.