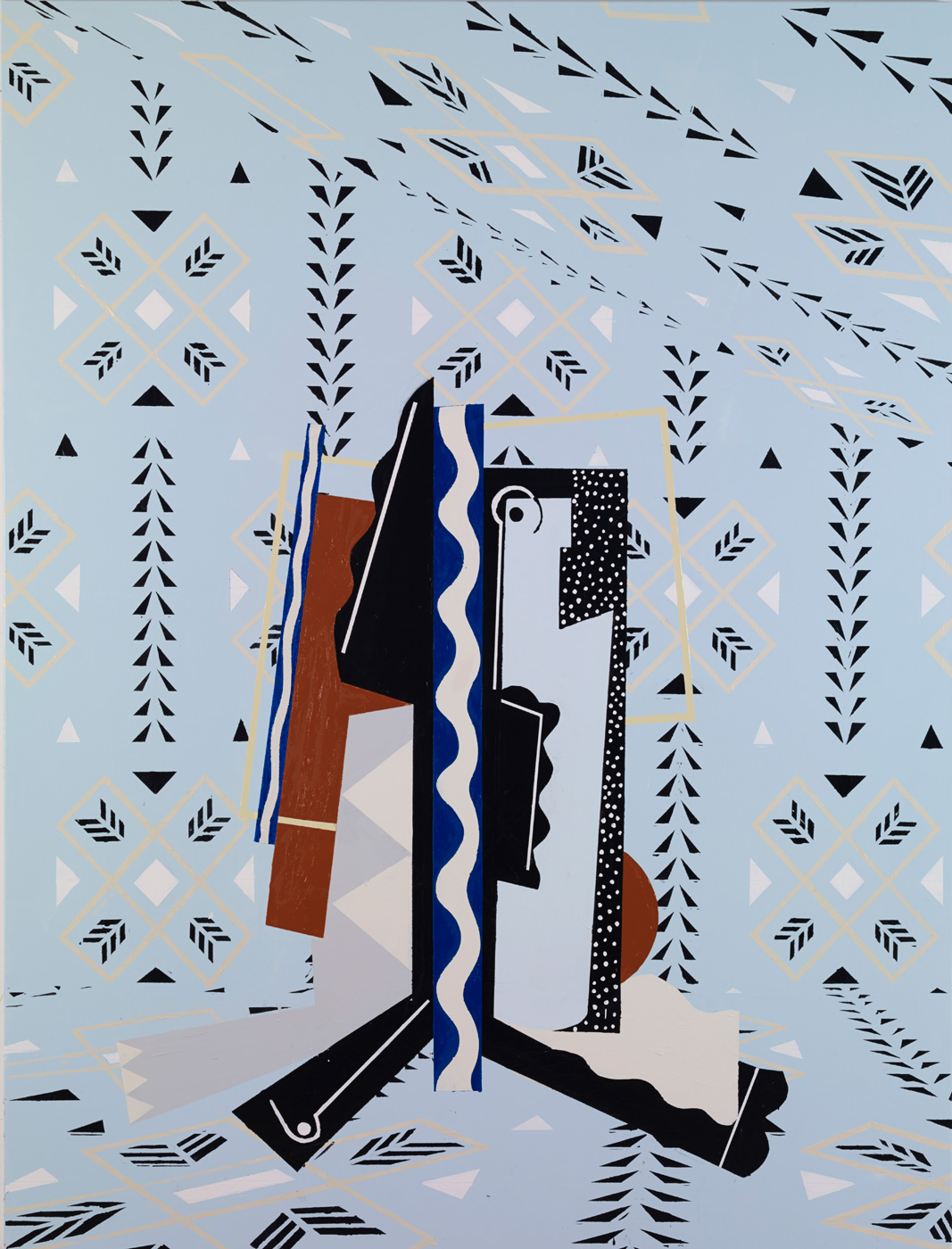 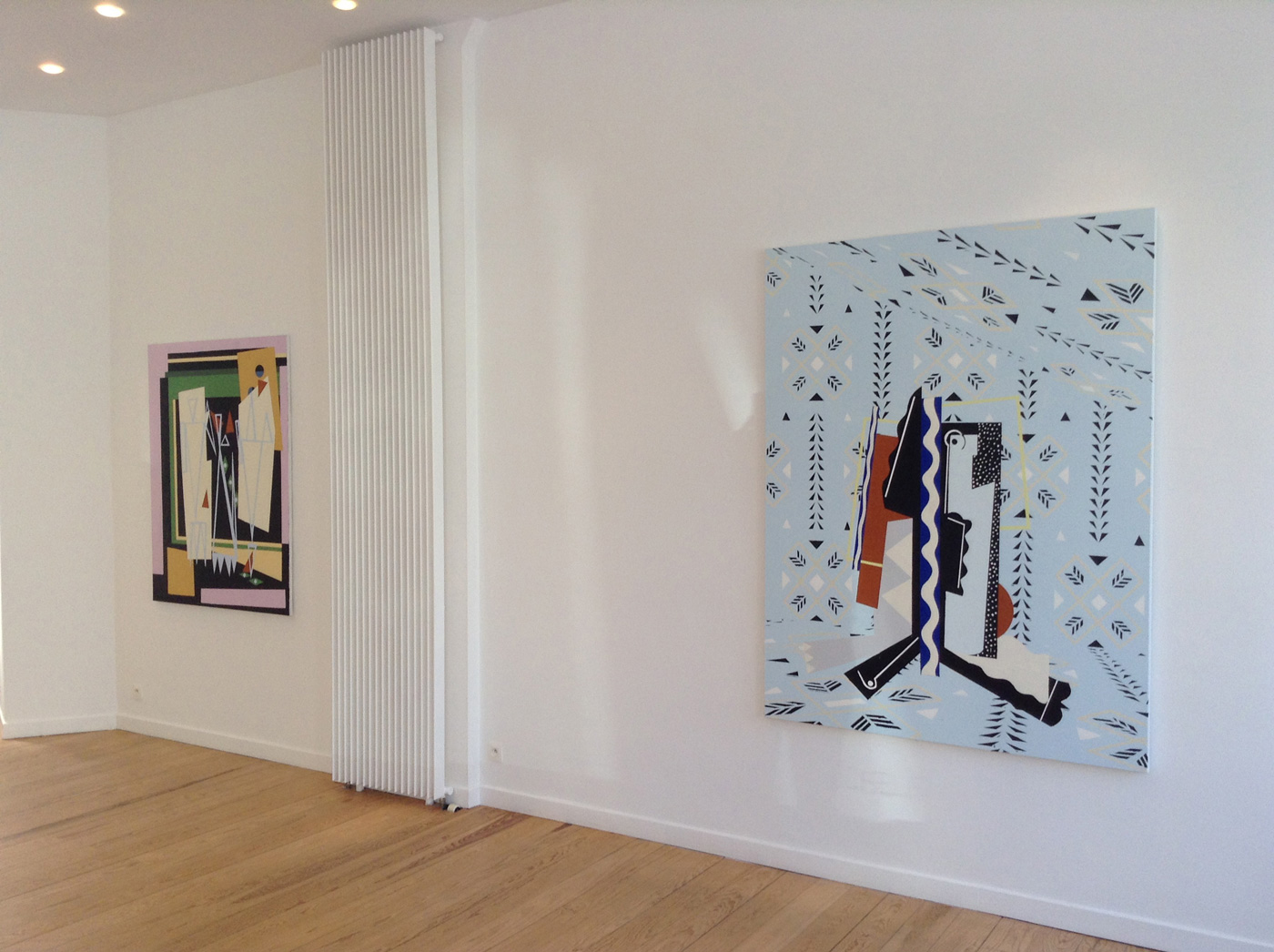 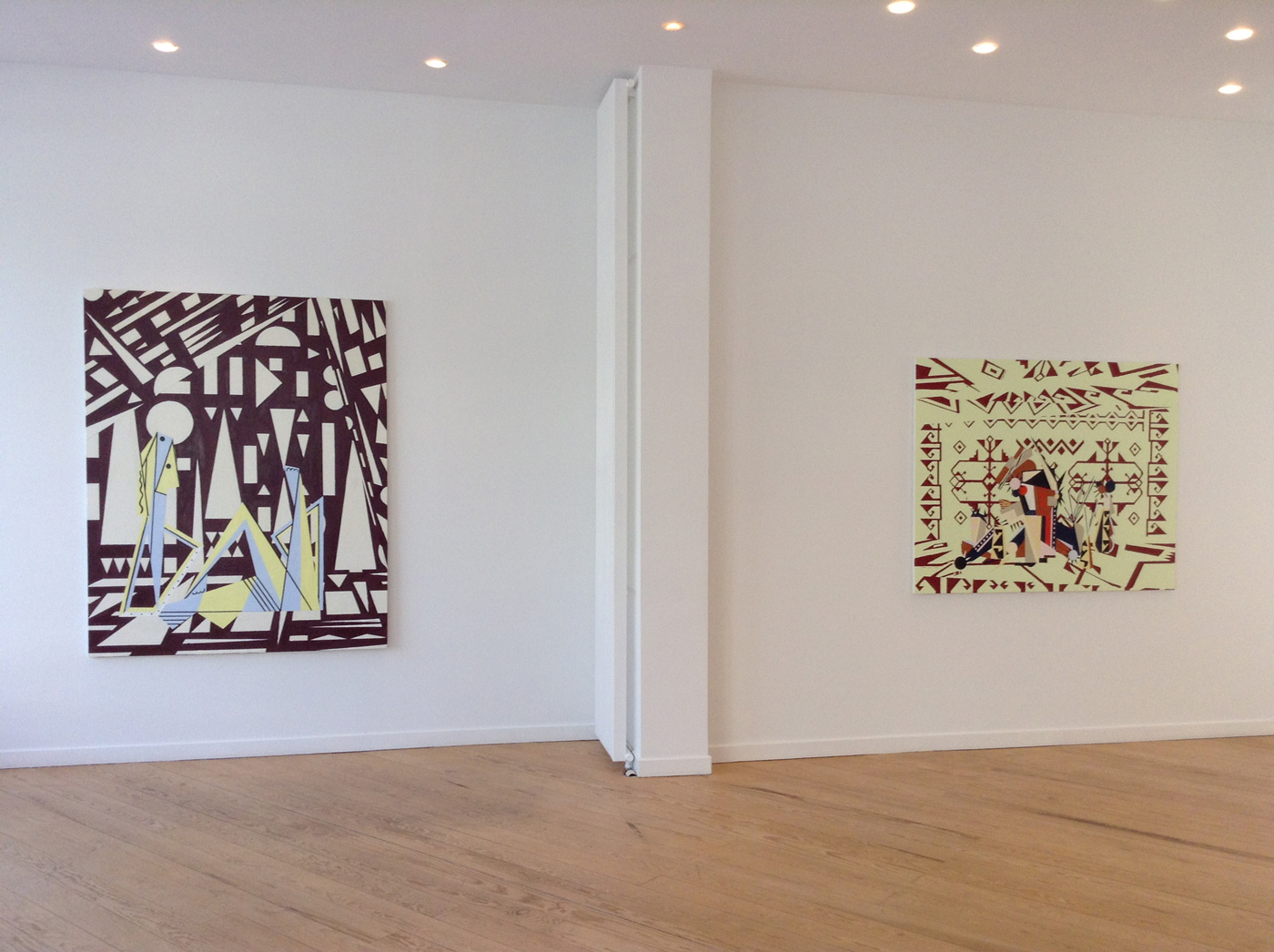 Guillaume Désanges: Your work has regularly changed over the last few years, to a point where it has become almost “periodic”. There are no clean breaks, but rather a sort of trajectory which proceeds by morphing from one series to  another. Is there a inearity to this evolution?

Farah Atassi: I don’t believe in clean breaks in an artistic career. I constantly try to invent new forms and my vocabulary is enriched as time goes by. My approach is therefore more accumulative than subtractive. Often elements which have kept me busy me in the past will reappear on a canvas but in a different way. In “Interior with Flowers”  for example I used the pattern of the carpet which was the centrepiece of my previous series but associated it with forms I had never painted before.

GD: Recently you do more head on work with decorative abstraction by distancing yourself from the architectural questioning that filled your first paintings. Could one say that the pattern now takes precedence over the space?

FA: The space remains and retains its importance but has changed, as it is no longer necessarily illusionistic. The  architectural dimension has disappeared to be replaced by a flat surface. If some depth is recovered, it’s now through collage in the centre of the painting, of figurines which are often bodies treated as objects. This is notably the  case in the paintings “Ballet” and “Dancing Figures”.

GD: What are the dynamics or desires which determine these almost organic interior mutations in your work?

FA: It’s the constant need to create the strange and to not fall into formal comfort. For this I create collections of forms which are presumed contradictory. This need is met by the gap between the background and the subject. In “Woman in a Studio”, I started off by painting a geometrical abstraction and then placed a cubist figure in the space. The figure served as an element which came to perturb that space, contesting it and breaking a sort of harmony.

GD: Could one say you have a relationship of permanent dissatisfaction to your own work?

FA: I’ve always kept a critical distance from my own work. Whenever I finish a series for an exhibition I have an intense feeling of satisfaction, then that feeling disappears very quickly and I start over again from scratch.

GD: So are you driven by a critical distance from your work rather than a feeling of ecstasy?

FA: You can’t have one without the other. I try to fight my own clichés by exploring different visual devices. This research results in exaltation.

GD: To what extent do you consider painting to be an autonomous gesture and a critical tool? In other words, what is the ratio of intention to intuition in your work?

FA: Before starting work on a series, I lay out a roadmap, using a selection of iconographic and pictorial references.  It’s a relatively constrictive starting point which gives its conceptual unity to the series. When it comes to  paintings however, I am confronted with new individual pictorial problems which force me to find answers I hadn’t previously imagined.

GD: There is a sort of progressive deconstruction in your painting. The subject is becoming less and less clear and more and more dispersed.

FA: I do not deconstruct; I paint deconstruction. Fittingly, this is an exercise in construction! It’s a principal  echoing cubism, which has greatly inspired me for this new series. In a general manner, as you have already told me, I do not do abstract painting but figurative painting representing abstractions.

GD: I sometimes have the impression that you revisit art history in a systematic or even unconsciously chronological manner. First the avant-gardes of the 1920’s then the modernity of the middle of the last century, then a psychedelic universe of the 1970’s to now arrive at the 1980’s and a certain type of superposition of “postmodern” patterns.

FA: I am inspired by modernism in a broad sense, but not only modernism. At all events I do not follow chronological  order. I believe that painting constantly resumes the same forms. A pictorial work advances through the arranging of  already existing forms. A successful painting is a painting in which contrary forms circulate. For example, I have  elements of decorative arts coexist with minimalist art without creating a hierarchy; I’m just as attracted to a wallpaper pattern as I am to an abstract painting. The background of my paintings often resumes an abstract painting  that I transform into a decorative pattern. For example in “Blue Collage”, I transformed one of Matisse’s patterns into a background setting.

GD: The generation you belong to has bridged certain gaps by looking critically at the history of shapes, meaning  there are certainly less ‘artistic taboos’ than before. Nevertheless, isn’t there a sort of vaguely guilty pleasure in  your approach and a relationship to the forbidden side of the painting or in the painting?

FA: It would be illusory to think that there are no more bans or taboos in art. Each generation conveys its own clichés. Painting will always remain an act of resistance, including and especially at a time when art without medium  is sometimes likened to a reflex, or a form of unquestioned academism. In the same way that there are formal tensions in my paintings, I would like these tensions to be able to play a role of discreetly perturbing elements, in conflict with their display context.