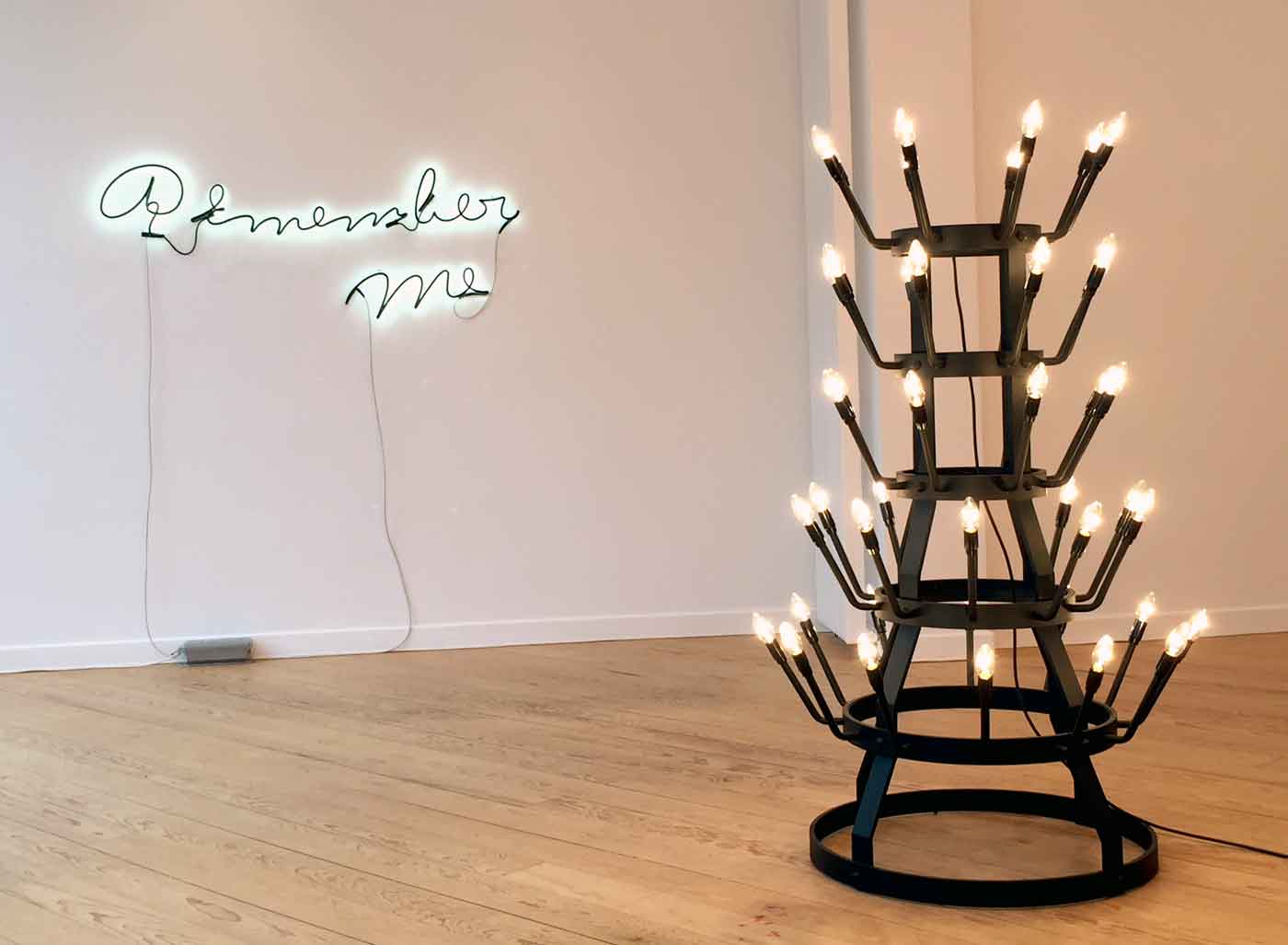 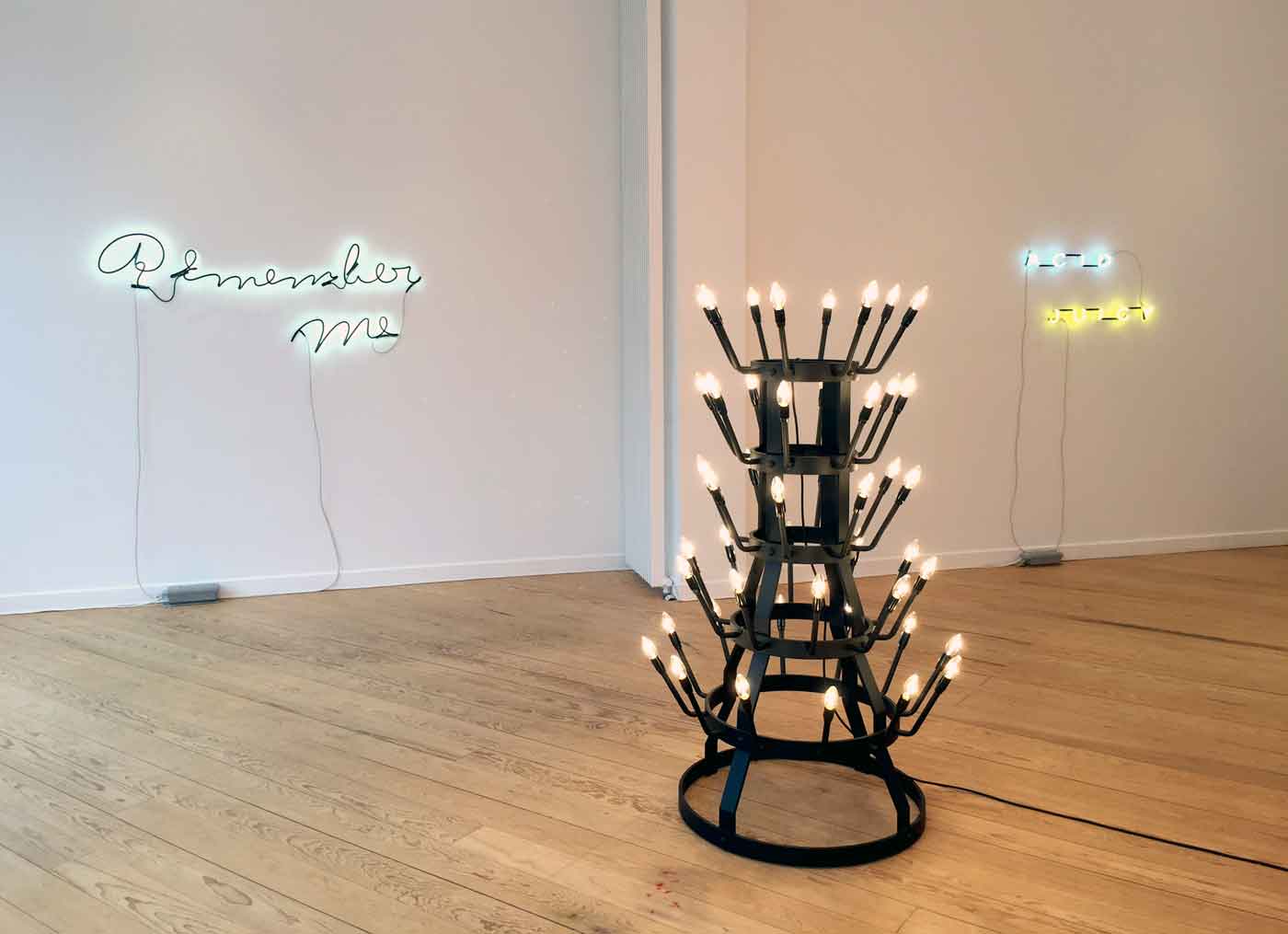 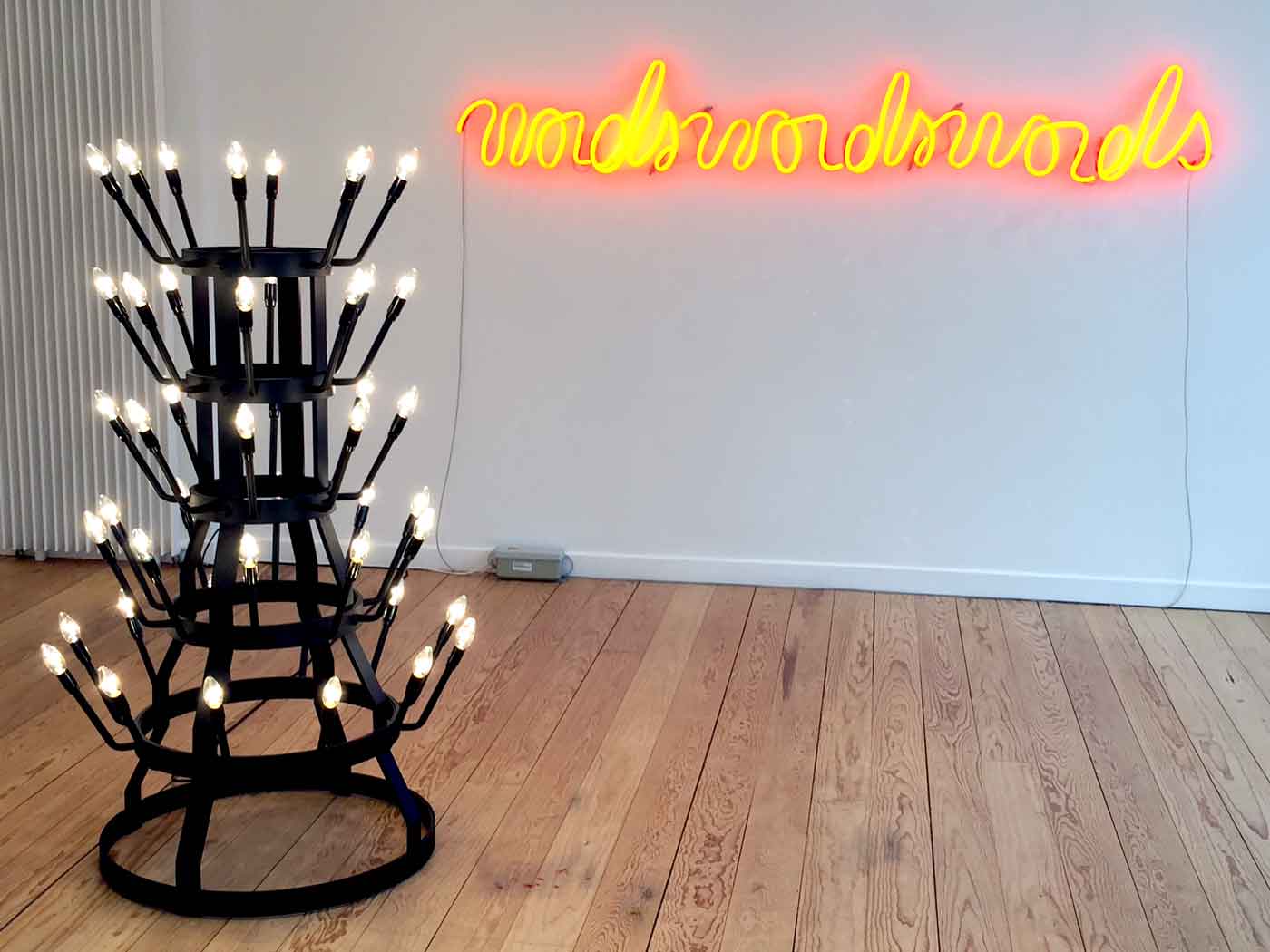 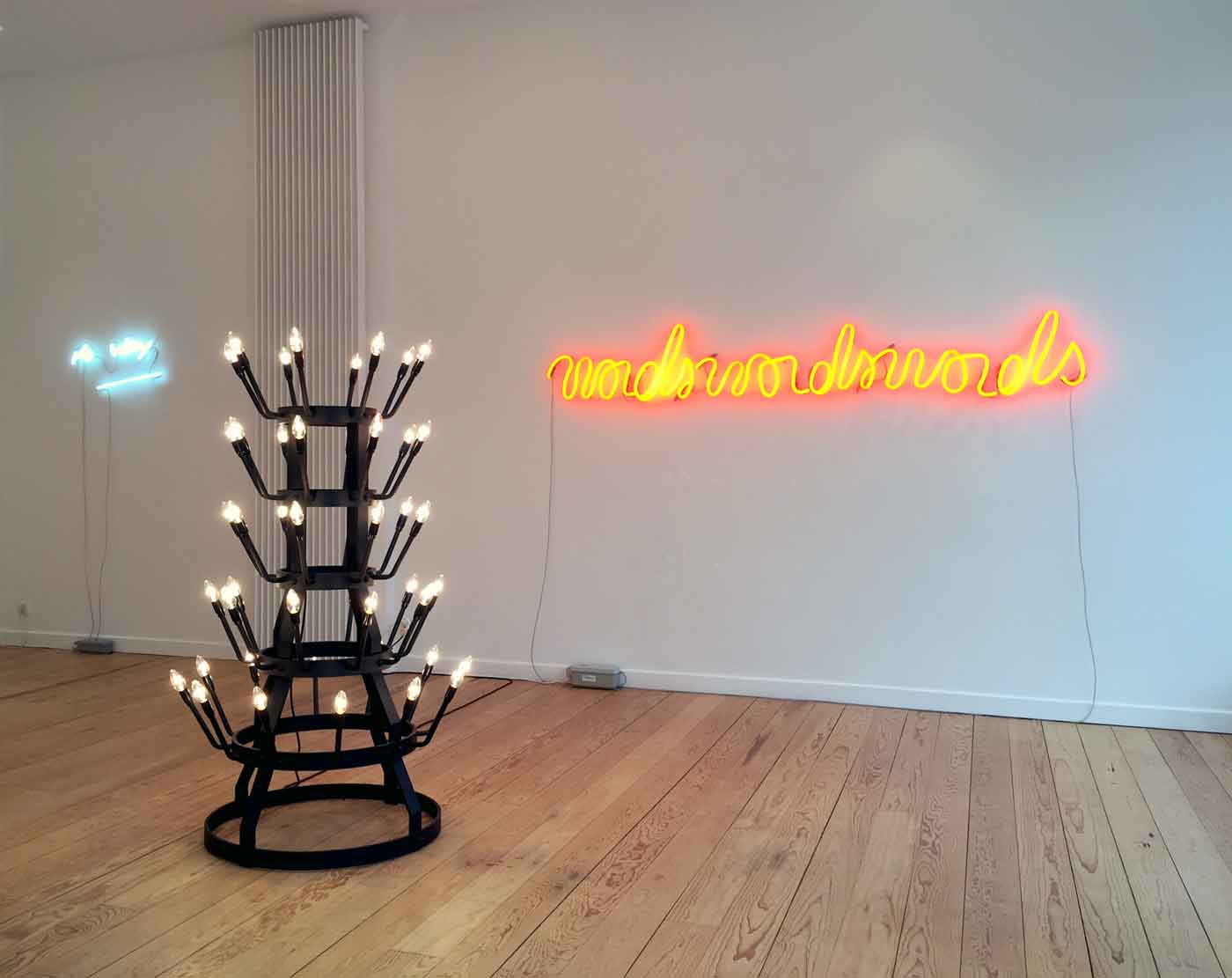 First as a chief cameraman, moviemaker, then actor, Jean-Pierre Bertrand, fancied cinema. Since the seventies, Bertrand has incorporated his interest of cinema into his work and developed a mixing of photography, movies, writing, painting, drawings on recycled papers, neons and installations. His work is radiant and full of references, although the artist claims that you can get into it without a key. "Reading and studying all of what has been written on my work is not necessary. You just need to be without any intention to communicate with it, to let what lies in everyone come out and reveal what the unique and the substance are".

The origin of his inspirations remains a mistery. Nevertheless, the artist chose to place the origin of his artwork in the history of Robinson Crusoe. His works, and his components are full of references to Crusoe's Island: salt, lemon, honey, plants… With Jean-Pierre Bertrand, impregnated with lemon juice (an allusion to the lemon trees discovered by Robinson Crusoe on his island), honey, or with Flemish medium which makes it translucent, the paper comes to look like parchment. As a result, it ressembles skin. The paper is also altered by being washed, soaked, nourished by salt, then worked with red coagulating acrylic giving it some transparency.

His neon works are often an association of two « letter-words » placed one under another. One white word and one coloured word united, can be seen as an allusion to lemon juice, which is very often used as a medium by the artist.

Bertrand's work has been seen at Centre Georges-Pompidou, Paris, MAMVP, Paris, Musée Picasso, Antibes, Carré d'Art, Nîmes, Documenta, Kassel. He represented France at the Venice Biennal in 1999. Present in either private or public collections he realized public commissions for the National Library of France, Paris and stained-glass windows for the Bourg-Saint-Andéol Chapel.

Marie José Burki (b. 1981 in Biel, Switzerland) lives and works in Brussels and Paris.

Photography, neon, text and video are the preferred media used by Marie José Burki. Using visual devices, her work focuses on creating constantly shifting relationships between static and moving images, which ceaselessly interrogate our perceptions of reality in a world saturated with images. Associated with close observation of the background of daily life, the confrontation of these media contributes to the realisation of a ‘fixed’ temporality, and, by this very means, to an evocation of time as at once real and suspended, accurately reflecting its relationship to the world in which we live.

Marie José Burki works contain plays and stakes in the action of translating words into images and reciprocally, images into words. The catchphrase "words, words, words" originally belongs to one of the most famous tragedy by William Shakespeare : Hamlet (Act II, Scene  2). In this scene Hamlet seems buried in the reading of a book when Polonius asks him what he’s reading. Hamlet just answers "words, words, words".  The quotation is usually used to underline knowledge’s vanity, and worthlessness of language and books.

He is concerned with the representation, display, and reception of imagery. His work is made of different medias, used to explore the african-american identity, both its history and the racial and social questions related to it. He often incorporates recognizable icons into his work, many from well-known advertising and branding campaigns.

The artist uses language and the popular imaginary to broach questions often hidden by our society. Acting as a witness, he sees himself as an archeologist of the visual culture, that he transforms to show what the mainstream says about the world.

With Remember me, 2014, Hank Willis Thomas conveys an important message in a simple form. His use of the neon is very effective, as it puts black colour in front and white behind, as a metaphorical nod to history. It says not to forget the struggle of the millions of African - Americans who suffered from white people cruelty,  and stood strong, during a large period when society was designed to keep them down. Here the title becomes a quote that hangs from the wall, as a note, handwritten, that can shine forever, so the viewer can nerver forget what happened.

Hank Willis Thomas has exhibited in galleries and museums throughout the world. Among recent exhibitions, he did shows at the Jewish Museum in New York, Seoul Museum of Art, Cleveland Museum of Art, at the Corcoran Art Gallery, Washington, ‘The International Center for Photography, New York, and the Biennal of Istanbul.

Thomas' work is in numerous public collections including the Whitney Museum of American Art, The Brooklyn Museum, Museum of Modern Art, and the Solomon R. Guggenheim Museum, New York. His collaborative projects have been supported by the Tribeca Film Institute, Open Society Foundation, The Ford Foundation, and have been featured at the Sundance Film Festival. He has permanent installations at the Birmingham and Oakland International Airports, and The Oakland Museum of California, San Francisco.

Stefan Nikolaev (b. 1970 in Sofia) lives and works between Paris and Sofia.

His work is centered on the multiple transformations and crossovers between what we know about objects from everyday life and what its become after the artist’s intervention. Under the visual surface of his works there is an on-going narrative about the complex relations that the artist has with life and death, time and space, consumerism and basic necessities of life. As a box of tricks invested in an exchange economy of signs, his objects are at once strange and familiar. Employing certain tactics such as removal, revelation, displacement or dismantling, the status of things is reconfigured by enlarging, reassigning or re-imagining them, so that the resultant work provides an uncanny sense both of its own belonging within, and separateness from the material world from which it derives.

On a technical aspect, Stefan Nikolaev is very careful about the execution of his works to the point of obsessive engagement with their physical presence qualities.

Stefan Nikolaev’s ‘candelabres’ take various forms, black or white, laying on the floor, hanging from the ceiling… It’s a work of art, obviously grounded in the history of art, and useful object of everyday life. These attractive objects, directly derived from the bottle rack ready-made of Marcel Duchamp, have light bulbs where one would normally put bottles. The object becomes spiritual, source of illumination, both literally and figuratively speaking.

Stefan Nikolaev has exhibited in galleries and museums throughout Europe. He represented Bulgaria in Venice Biennial in 2007. Among recent exhibitions, he did shows at Palais de Tokyo, Paris,  Les Eglises Centre d'Art Contemporain, Chelles, France, CCA, Glasgow, Scotland, Fondation d’entreprise Ricard, Paris, Casino Luxembourg, Luxembourg, Montenegro Biennial, Montenegro. A monography about his work ‘One for the Money Two for the Show’ was published in 2012.