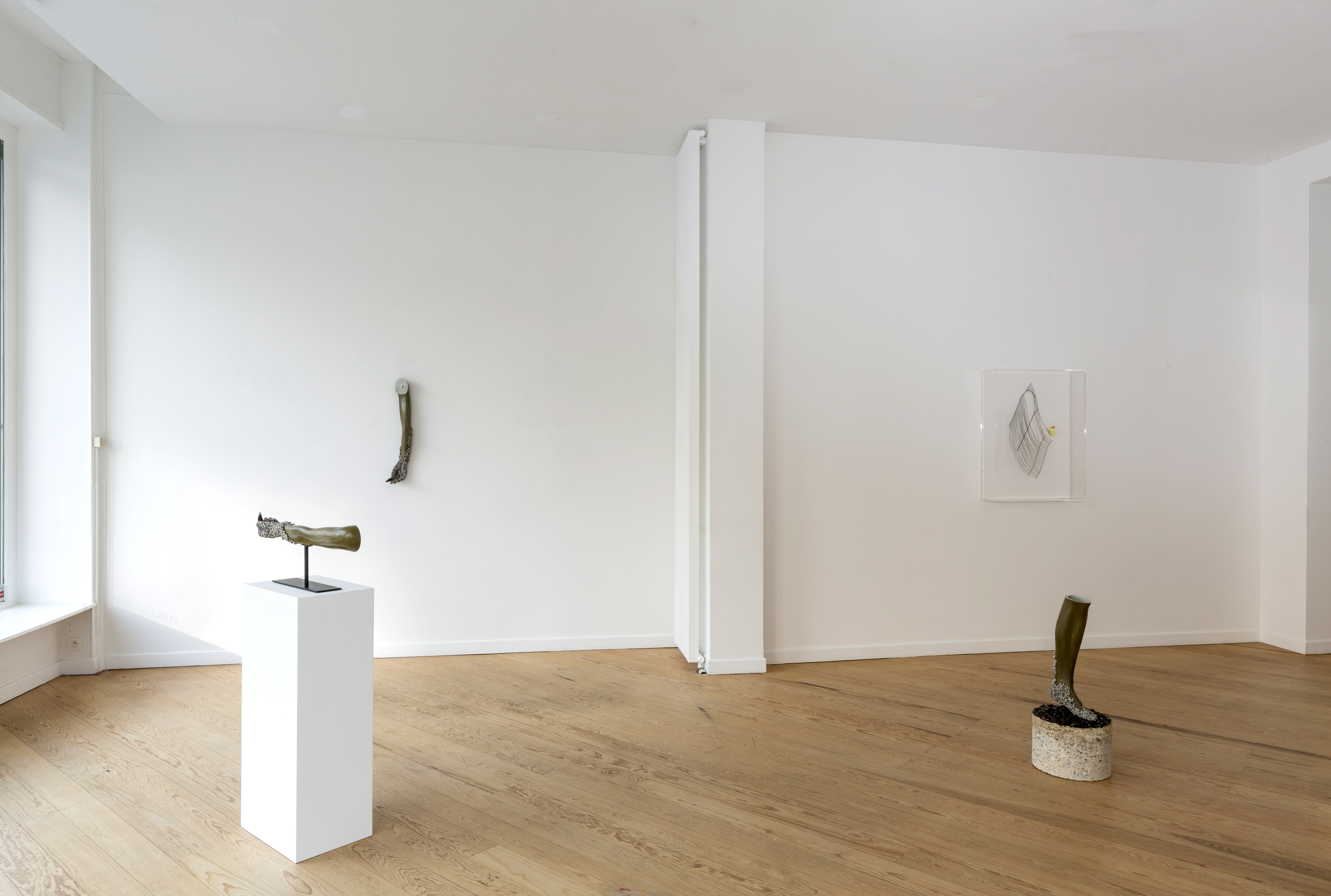 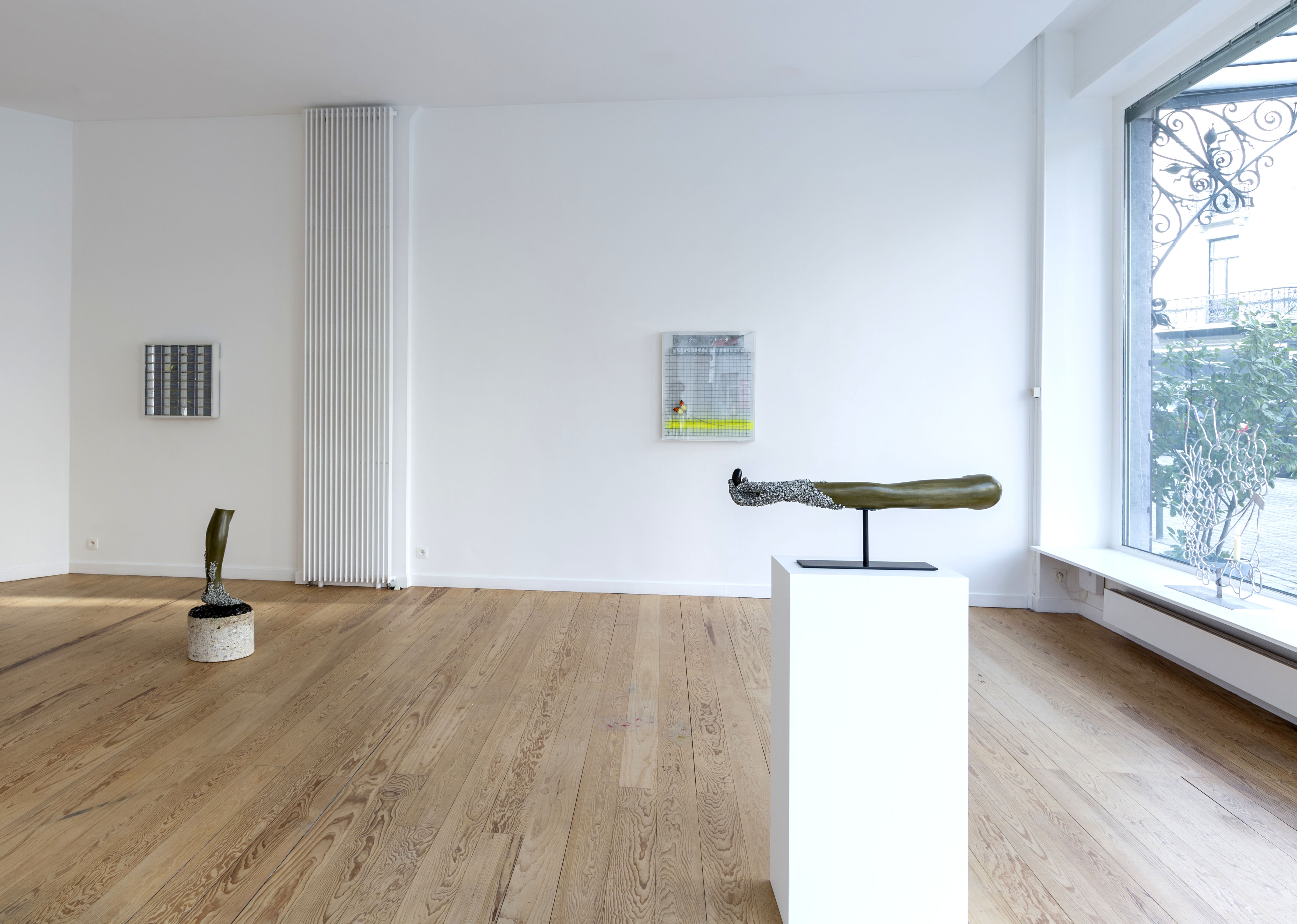 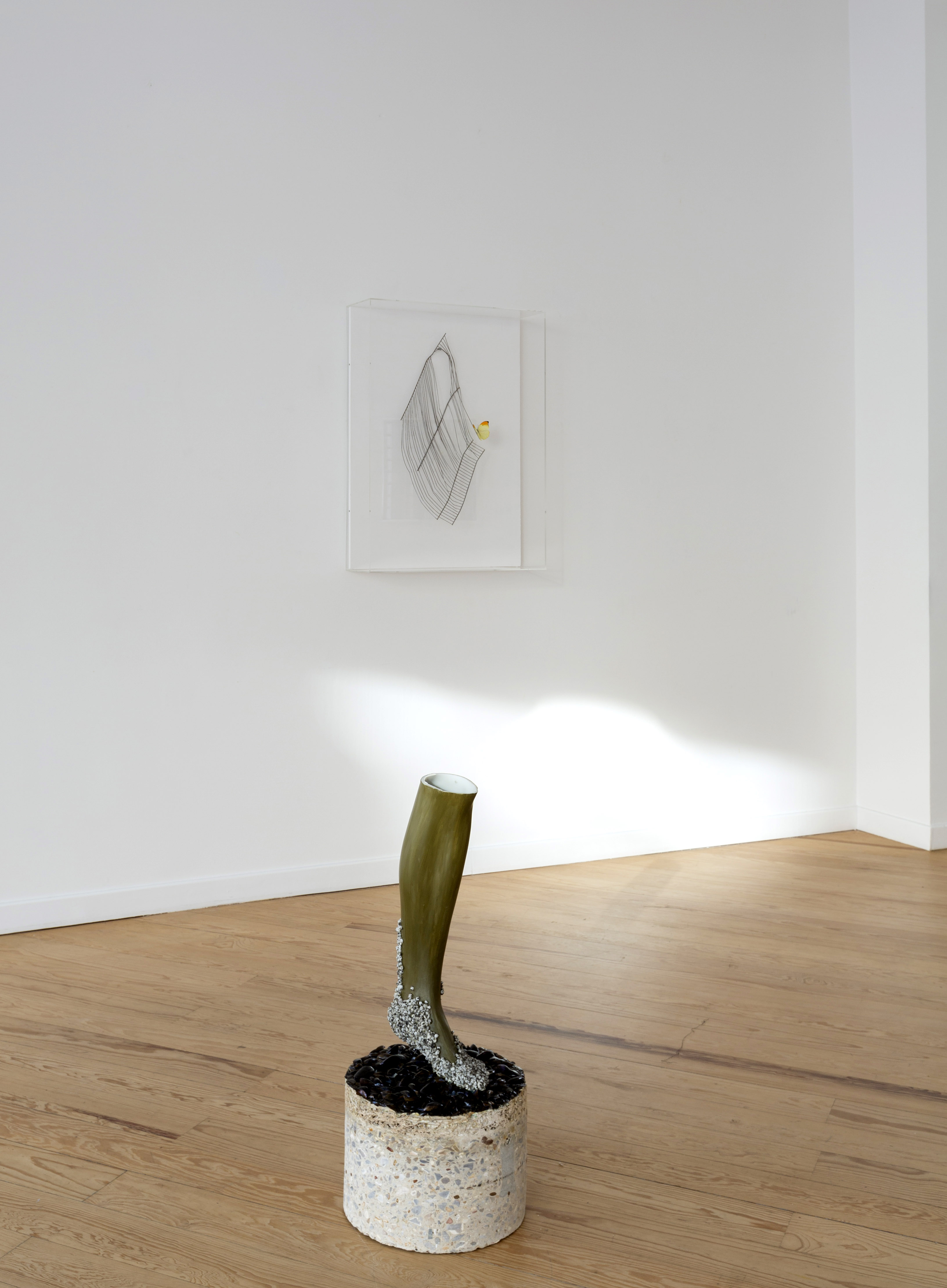 “My works are created from materials and forms that have been found, from things void of values, which I carefully redefine by elaborating their logic of appearance each time. Little by little this sequence of works forms a tale, where the associations of meaning between each piece replace a style or a genre. This tale refers to western history of a representation originally established by religious or magical laws. It is themed with political, economic and scientific data that punctuate our daily lives.

In Brussels, the rest of the works presented and entitled « Still Life » set the tone of the exhibition. It is mainly constituted of architectural waste, of society’s cast-off materials, which are arranged in bas-relief and all have the distinctive feature of a naturalised butterfly in their composition.

What simpler allegory of the fragility of life than a butterfly? The lepidopteran flutters along a random line formed by a broken metal grill and rests on the alveolus, which form a fence. These fragments have been chosen because they are formal systems of extension and development in space. The butterfly’s function is therefore also rhythmic, but as with vanitas painting, here it’s about stopping time, suspending it in vision.

In still life artwork the lepidopteran constitutes a symbol among others (flowers, candles, shells etc.), which suggests that terrestrial existence is empty, vain and that human life is precarious and of little importance. The English term “Still life” could be translated as “silent life” or “motionless life” and this term is not very far removed from the “inanimate life” of fashion models, dear to surrealist imagination.

In this way, in the sculpture “Dream N°1030” * a mussel plays the role of an activator and seems to drive a modification in the DNA sequencing of a model, progressively transforming his appearance into barnacles1. The position of the model’s limbs is ordinary and his gestures are simple: showing, taking, crushing. They certainly fall within this fictitious reality, which according to Freud makes the feeling of uncanny turn into that of poetic uncanny.

“Stilleven” is the reproduction of a drawing, a composition of fruits, of which the mirror image has been cut out of an aluminium plate. The drawing has been mounted on a base and is used to present a candle, transforming the drawing into a chandelier. The work is presented in the large front of gallery window, looking out into the street and playfully calls to look beyond the simple representation of the material and consumerist universe of today’s world to reach timelessness. This dimension is directly related to the reminder of life’s transience, materialised here by the candle.

A butterfly, a mussel, or a candle are motifs which relate reality to fiction and vice versa. They are extremities of a segment, linking a concrete thought to an artificial system of meanings. “

1. Cirripedia shell-fish fixed in great numbers to rocks or on the molluscs of seashores.