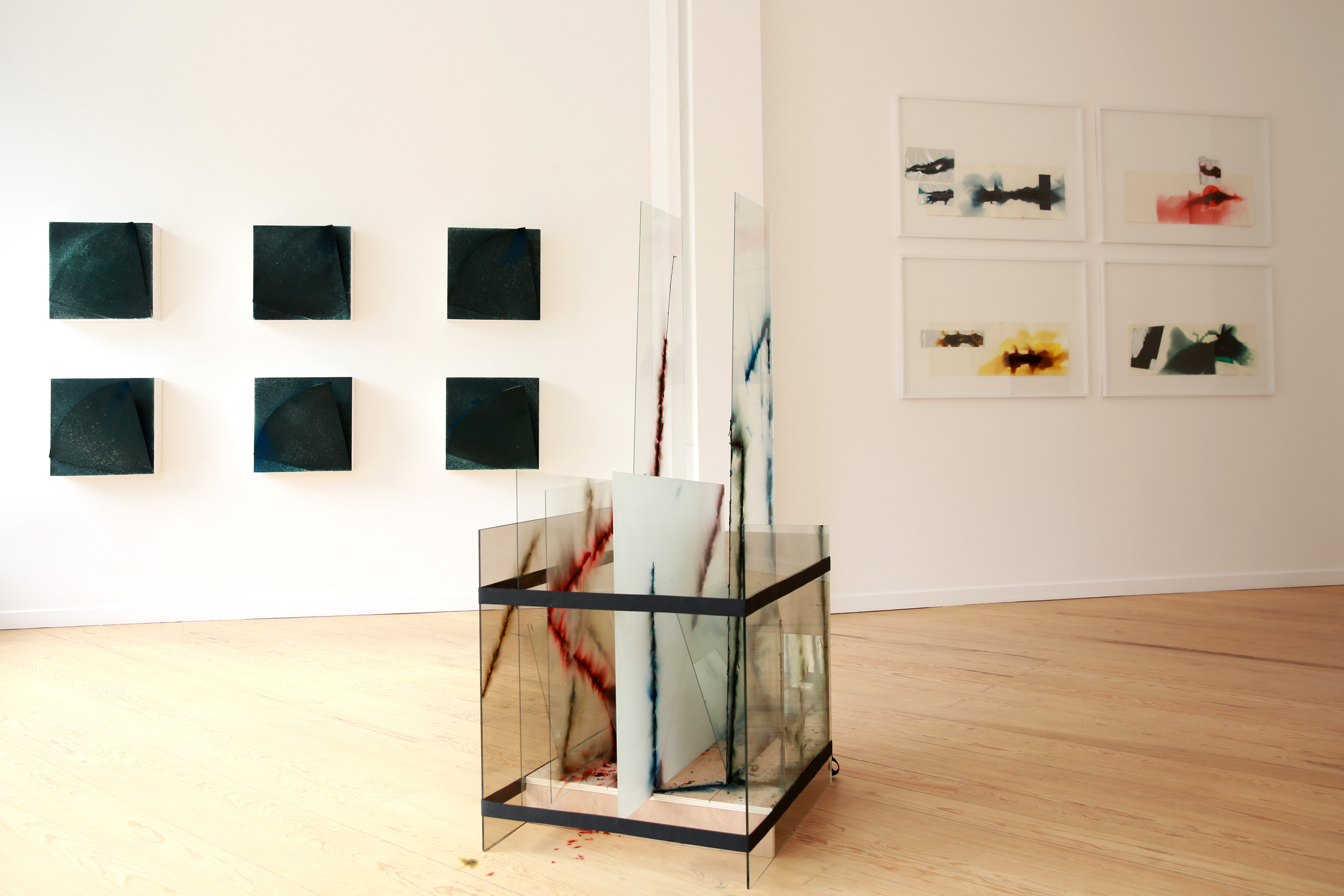 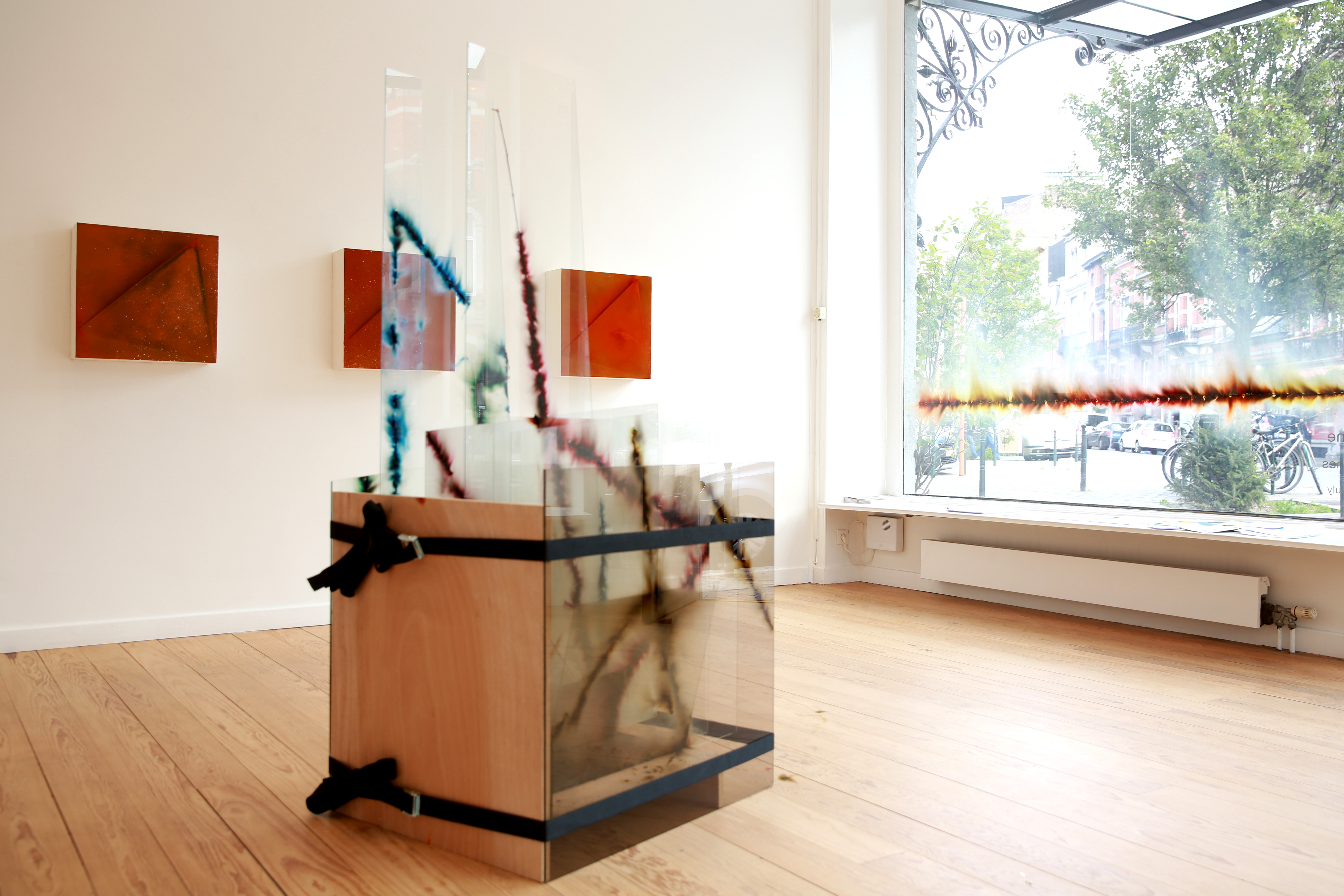 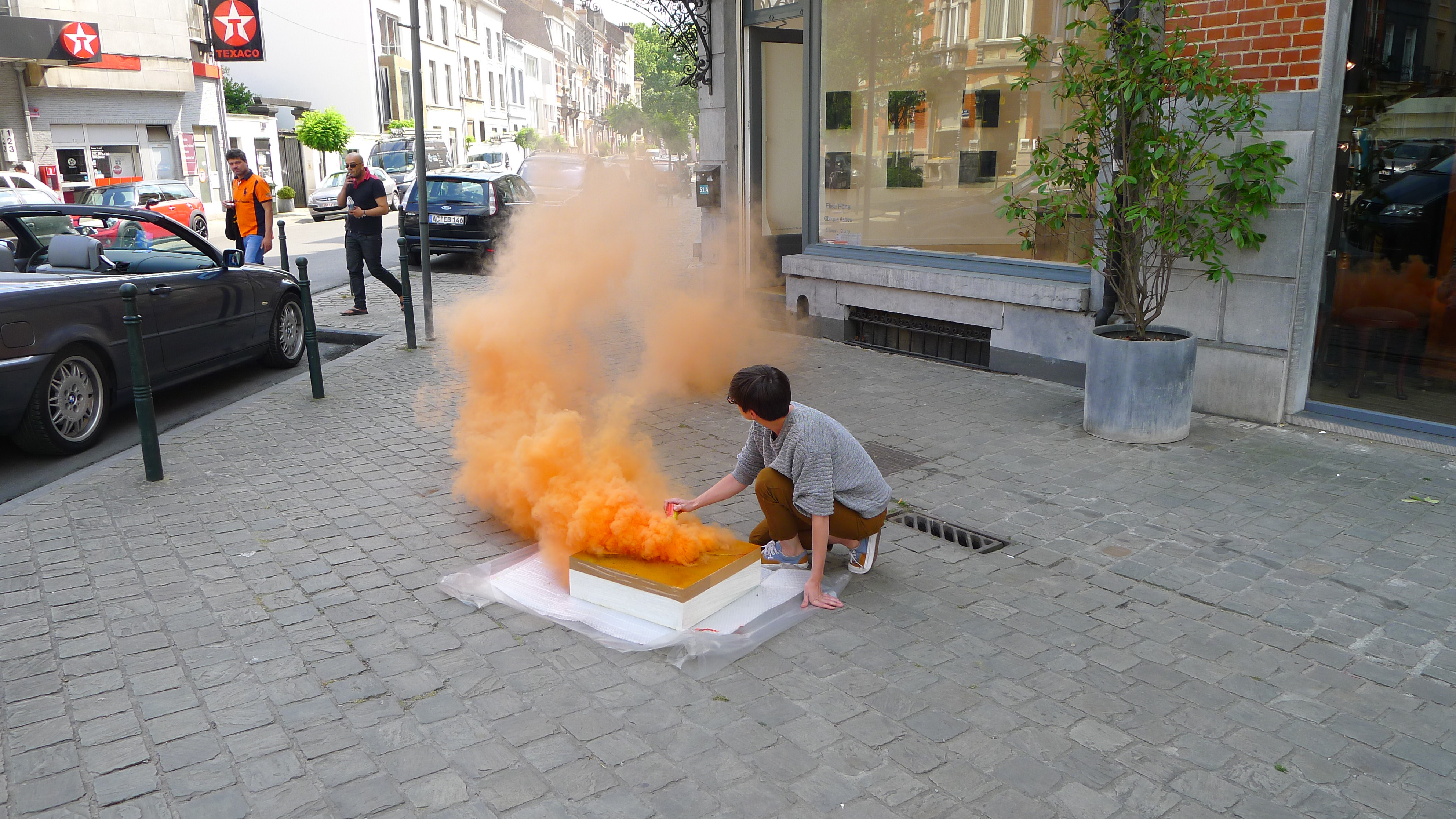 A variable geometry of full and empty spaces, of lines and scrolls are outlined on the whiteness of each invitation card. Clues to a previous action, to an aerial waltz of smoke, whose movements came to an end, letting the colour set on the paper. An invitation to enter into the movement and the material.

In the exhibition “Oblique Ashes” the two series of sculptures entitled Valses (Waltzes) reveal this ambivalent meeting of line and colour. For each haut-relief, the protruding angles have been conceived to receive particles produced by the combustion of smoke bombs. Through the process of pyrotechnics, the artist unites the solidness and finesse of plaster with the ephemeral and uncontrollable character of smoke. From the pigment deposits, coloured abstractions are born as a result of this interlinking of the undetermined and the fixed.

Horizontal or vertical, in the image of futurist architecture, the series of sculptures together reveals the emergence of an arched or triangular form. Throughout the games of superimpositions and successions, our gaze is graced with the dual movement of pictorial dispersion and sculptural elevation. Further ahead, the series of ink paintings can be read as a fantastical projection of the waltzes. Geometrical black and white shapes float in an undefined chromatic space, that of a science-fictional dream, where temporary doors are opened to other dimensions. At the sculpture’s physical and real presence, the drawing invents the creation of a space-time without limits, the dreamlike vision of an abstract geometry.

The use of pyrotechnical objects in Elisa Pône’s work translates a reflection on the representation and perception of time. From the first blast of fireworks, the sonorous and visual power is contained in a place or an object as an expression of the vanity of the bright and colourful show, a sort of memento mori, like the internal explosion of an abandoned car (I’m looking for something to believe in, 2007). Rather than festive explosions, Elisa Pône prefers the discreet power of combustion and its linear inscription of burns and ash deposits on different supports: paper, glass, wood. In the installation À égale distance du présent (At an equal distance from the present, 2012), after the inflammation of wicker, straight black or oblique lines move to be irreparably fated to the same inertia. Later with La Couleur comme accident (Colour as an accident, 2013), multiple chromo-geneses emerge in a blaze of sparks, smoke and powder. Expression of duration: a disappearance provokes an appearance. The interest for pyrotechnics seems to be progressively shifting from the effects of the products to the material itself, yet another slide towards abstraction. The work Chromo-combustibles (2013) associates a simple geometric figure with a primary colour, reduplicated by the passage of a smoke bomb. The shape, the colour and its use are superimposed, a renewed alliance of the controlled and the unpredictable.

Actions, effects, sequences and recordings. Abstraction and figuration move in the same direction. In a previous work, the triptych video À la fuite (on the run 2012), time passes in three portraits: the slow burning of a cigarette, the erratic strolling of a walker, the dynamic oscillation of a motorised scooter. Narrations with neither beginning nor end in which the singular perception of the present is apprehended.

Through sculpture, drawing or video, Elisa Pône activates and captures movement and matter, creating a cinematic representation, which reveals a reality in perpetual instability. Hypnotic waltzes and hallucinated visions of a transient combustion, leaving one with a sensation of perpetual dizziness.

“If the doors of perception were cleansed every thing would appear to man as it is, infinite. For man has closed himself up, till he sees all things through narrow chinks of his cavern.” - William Blake, The Marriage of Heaven and Hell, 1790